Continuing from Part I

It was past two in the afternoon when we reached back to the col between Chandan and Vandan. It was becoming unbelievable hot and it was impossible to linger further in the murderous sun. One of our trek-mates Amol Chandurkar was feeling utterly exhausted and desperately wanted to rest. We somehow urged him to come with us for some distance further till we find some suitable place for him; he reluctantly agreed and we immediately started our hike towards Vandan. 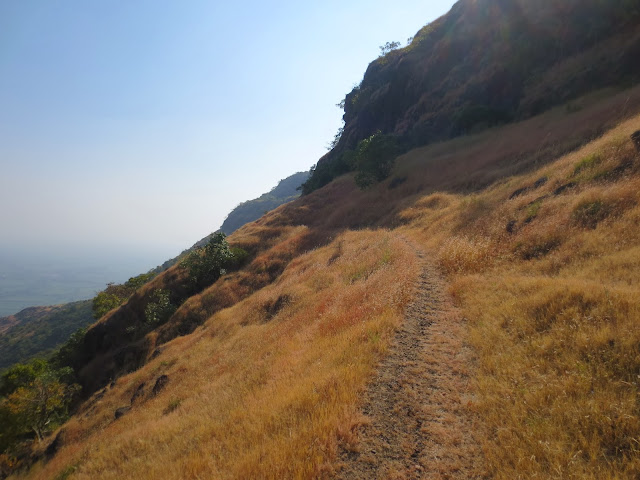 After a walk of about 10 minutes, you come across a bastion which is partly hidden under the branches of the tree and plenty of dry grass. 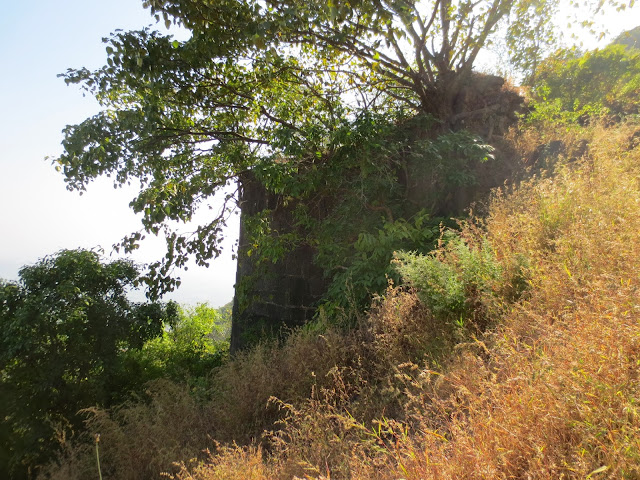 Going further up, you come across first gate of the fort which is in dire need of maintenance. 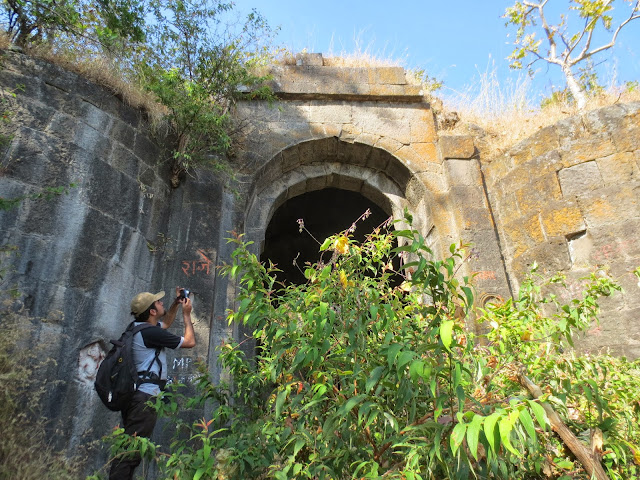 There is an idol of Lord Ganesha on the left side of the bastion. 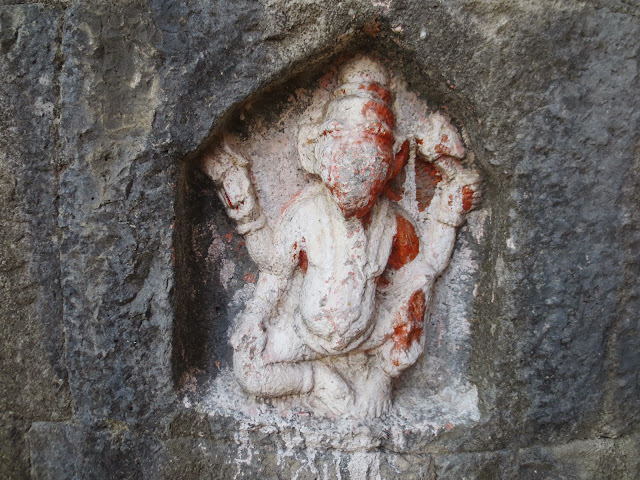 After few steps, you come across second gate which is covered by so many bushes that you need to make really some efforts to enter it. Your heart wrenches once you see apathy of our government towards the forts which are the backbones of our pride. 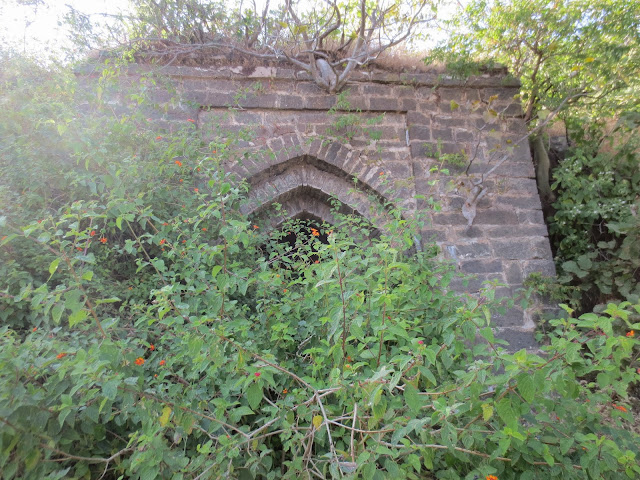 Persian inscription can be seen on the arch of this gate. 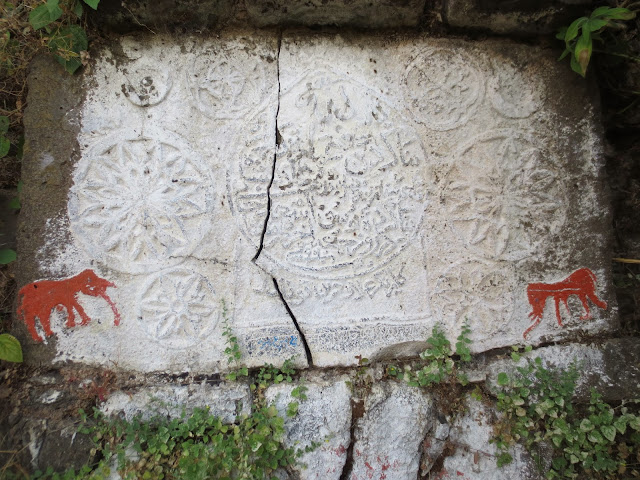 After passing through the second gate, you soon come on top of the fort.

As we were reaching to top of the fort, two monkeys came to greet us. They were not looking at all friendly and were interested in attacking us to grab some food. Little sticks picked up at the base by Amol and Avinash were keeping the monkeys at bay. Few of my trek-mates were not comfortable in confronting these monkeys and were ready return back without visiting the fort. But I was not willing to return back and persuaded them to ignore these wild creatures and keep walking. Soon, we passed the area of the monkeys and heaved a sigh of relief by seeing monkeys not following us beyond their area. Amol who wanted to rest did not have courage to rest in isolation and continued walking with us without any complaints.

There is a dense forest on the plateau inhabiting wild boars and rabbits. Well, we were not aware of the wild boars in the forest when we were wandering on the fort but still, some things just did not seem right of the area and this fort had some kind of haunted appearance to it. To make the matters worse, there was hardly a soul in sight and we were only five on the whole fort. I was just hoping not to come face-to-face with any ravenous, prowling carnivore.

We came across many water ponds on the fort which are frequented by wild animals to quench their thirst. Well, we were informed about the same by few villagers when we returned to the base. 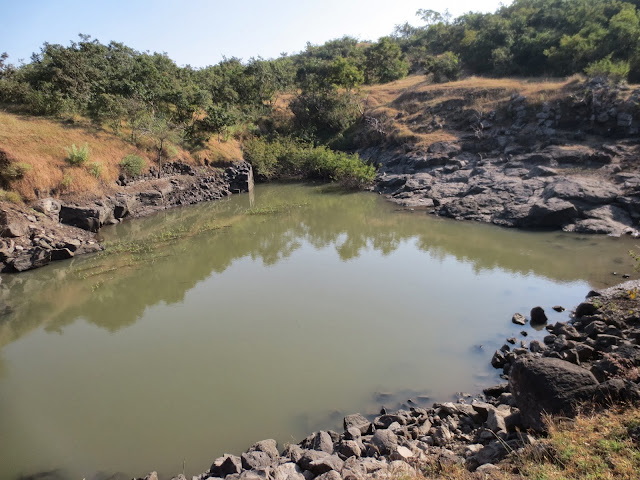 Our aim was to reach the mosque which we reached after walking for 10 minutes. 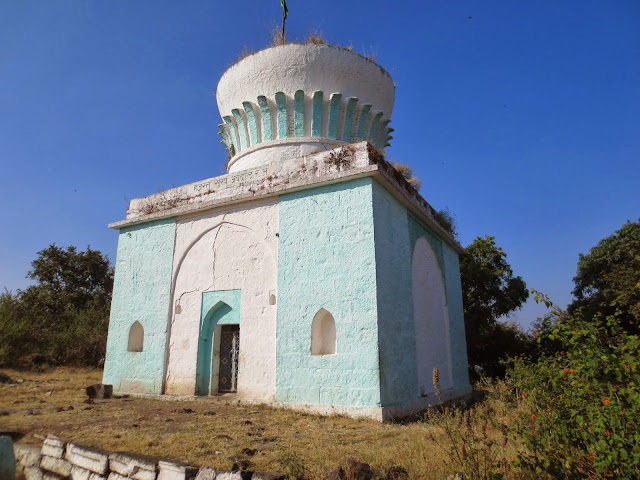 There is another pond adjacent to this mosque where there is a some sort of gate. 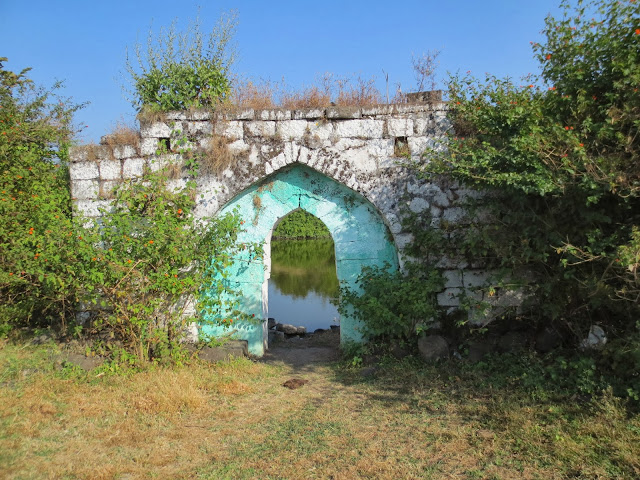 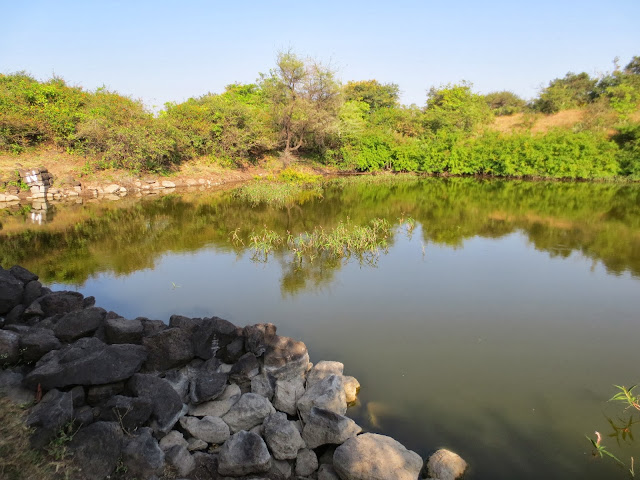 There is some kind of structure near the mosque with the footsteps carved on it. 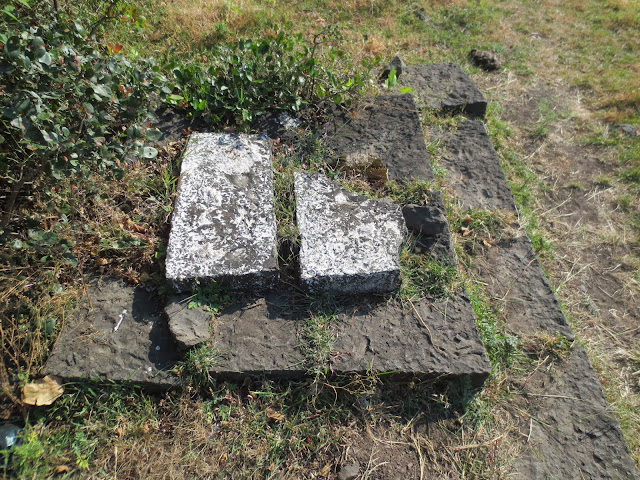 Remnants of the structure on the fort 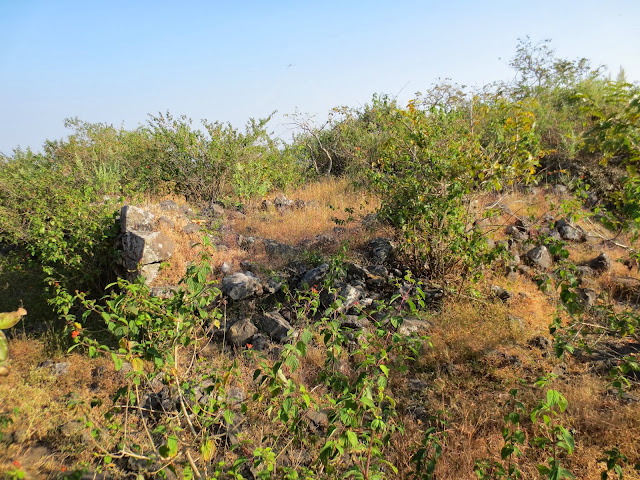 There is a hill on top of the fort. I was keen to go on top of the hill but considering most of my trek mates were too tired to have further climb, I did not push further and we decided to return to the base. 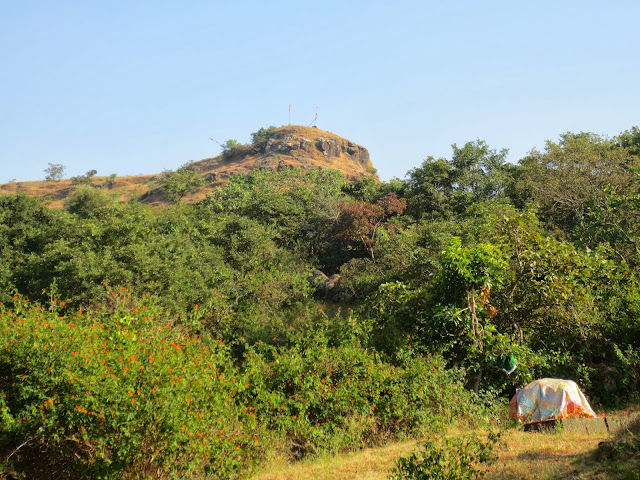 Another mosque on the fort 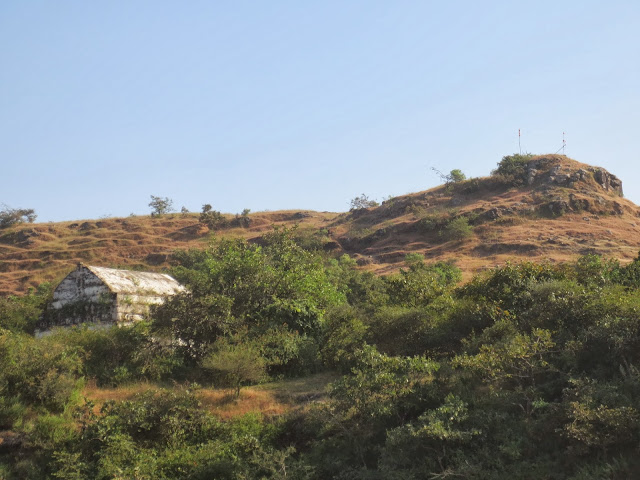 As we reached to the point from where we had to descend from the fort, we came across a group of 7-8 people who after seeing us, approached us and began enquiring about us. We were just hoping that we were not dealing with the thugs as their way of asking questions seemed to be too rude. Instead of panicking and revealing too much information about us, we dealt with them confidently and once they realized our confidence, their tone of speaking to us mellowed down and we started our descend.

Well, another danger was lurking us ahead. We were again confronted with the same set of monkeys who had troubled us while we were ascending. This time these monkeys were looking more determined and more ominous than before. They were hell bent on grabbing few things from us. I was the one carrying two bottles on the side pockets of my backpack and a monkey jumped on my sack from behind to have a go at the bottles. Well, this was totally unexpected and I immediately threw my backpack on the ground and tussle for the backpack began. Monkey was pulling it from one end and I was pulling it at the other end. Soon after hearing our shouts, a group that we had met a while back, came on the other side to see what was going on. It must have been funny sight for these on-lookers but not at all funny for me. Soon after a lot of howling and shouting, I was able to pull off my backpack successfully. I immediately slid the bottles inside the sack and again hoisted it on my back and again came back on the top to catch my breath and in the company of the large group. Somehow, the monkey knew my face now and knew that I had definitely something in my sack kept looking at me from the distance. Everyone in the other group told us to ignore the monkeys and distract them so that we could quietly slip away. As they were distracting the monkeys, I started to descend in a hurry. Avinash was just behind me and now, it was his turn to face the wrath of the monkeys. Well, it seemed pride of monkeys was at stake and they were keen not to return empty handed. Avinash shouted loudly and in order to distract monkeys, threw his sack almost 30 ft down where my other trek mates were standing and watching us. Avinash further urged my trek mates to pick up his sack as he had his valet inside it. My other trek mates were already frightened and were not coming forward to pick up Avinash’s sack. It was a stalemate for a while as monkeys were also confused what to do next. Finally, my trek mates gathered the courage and picked up the sack. Soon, things were coming to normalcy and we again started to descend not sure whether monkeys would keep on following us. Fortunately, nothing dramatic happened further. It seemed monkeys lost further interest in us and decided against following us any further. Our heart was beating loudly till we reached to the col again.

After coming  back to col, we immediately started our descend. I had spotted another trail which was different from the trail we had taken earlier.I asked my trek-mates whether we should take the new trail but nobody wanted to do any experimentation and we all decided to stick with already tried route.

There is something amazing with the trails. The same trail looks different while ascending and descending. We seemed to have lost the trail by which we had come up and the trail on which we were treading was leading us further away from the temple at the base. Only comforting factor was that we were heading down to the plains from where we could have taken the long walk back to the village. Fortunately, some of the shepherds spotted us from the base and guided us to the correct trail leading us back to the temple. Interesting thing that most of the time, we were only hearing their shouts and we were just following their instructions. Finally we again seemed to be back on track and just waved in the below direction from where the shouts were coming still unsure to spot the exact location of these heavenly souls.

Soon, we were back to the temple and threw our backpacks to rest for a while. As we were resting a bit, we saw the same group coming down following the correct trail which was shorter and simpler.

It was past 5 in the evening and being the winter season, sun was hastily making its way to the western horizon. Chandan-Vandan were both looking golden in the slanting rays of the sun. Cattle grazing with the backdrops of the golden looking mountain was a sight to behold and I was glued to this picturesque and near-perfect setting for a long time. 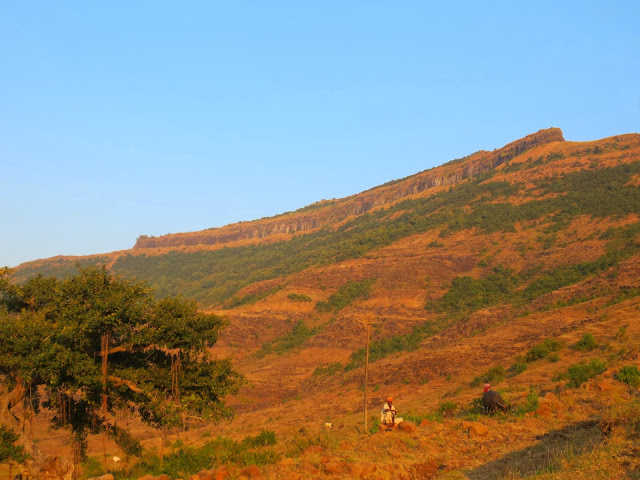 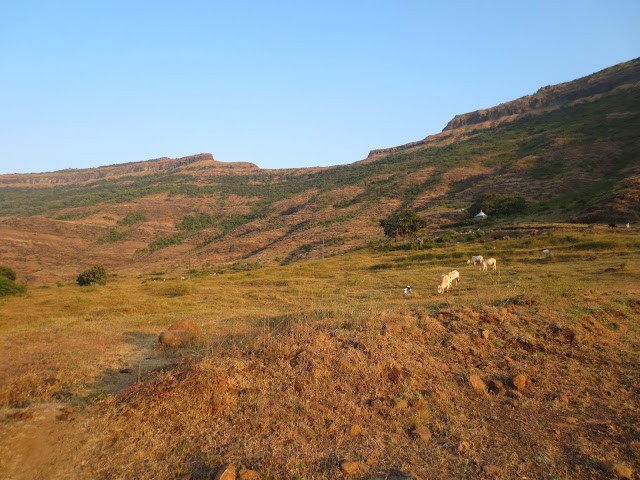 Soon, it was time to return back to our car. Along the way, there were many huts and I captured this photo depicting the pure love between two sisters. I showed this photo to both of them and elder one seemed very happy and gave me a smile which was my reward for a day of hard toil. 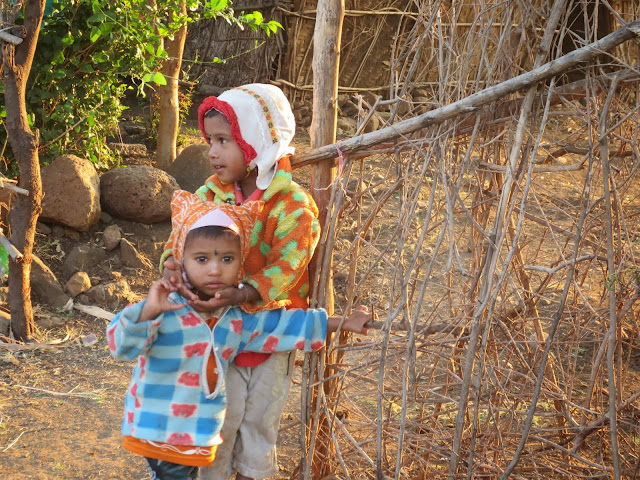 We were still not done and still needed to visit an ancient temple along the way in Kekali village. Though we were tired to the hilt, knowing that we would not be visiting this place in the near future, persuaded each other to come out of the car and visit the temple. 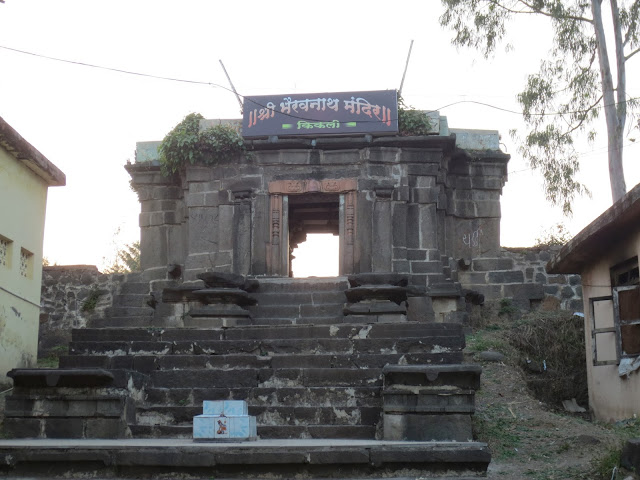 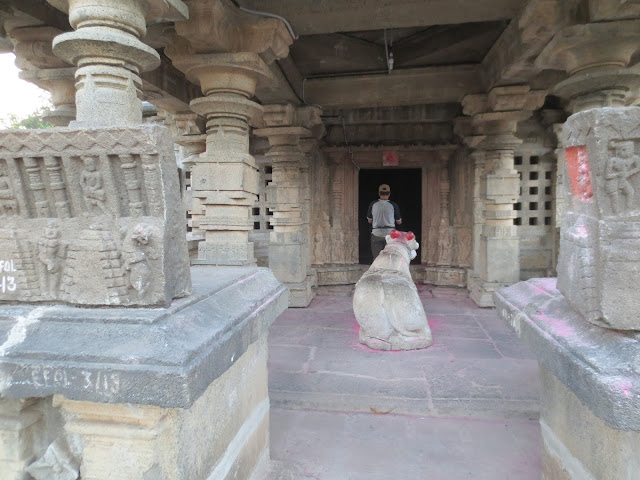 Soon, it was time to transport us back to the real world - world of comfort and choice. We halted for a much needed tea break along the way and reached back to Pune around eight at night. It was still Saturday night and whole Sunday was in front of us to rest and spend quality time with our beloved ones.

Overall, this hike provided some unforgettable moments. I won't forget encounter with monkeys for a long, long time. In a way, it has added to the kitty of my hiking experiences and taught me a thing or two to face such adversities with calm and poise in future. Experiencing rugged terrain of Sahyadri from such close quarters has further catapulted the presence of great Sahyadri in my psyche.

Tips for the hikers
Thank you for reading the blog!