Chandan-Vandan -- A Tale of Twin Forts : Part I

Setting foot in new area, observing new landscapes, visiting the picturesque interior villages and living an adventurous life really drives me to come out of my comfort zone and reach beyond my boundaries. In that sense, I was looking for a new destination for a day hike and I finalized the Satara region where I hadn’t hiked before. There are many beautiful forts in the Satara region and I finalized twin forts Chandan-Vandan which lie on the boundary of Satara and Mahabeleshwar region.

As I was going to lead this hike, next task was to gather all the available information regarding the forts. I went through most of the available information on these forts, took printouts of maps, called my friend Sahyadrimitra - Onkar Oak for his further inputs. Thus, plan seemed to be perfectly set for the hike on Saturday, 9th Nov with two of trek-mates, Sandeepak Phadke and Chinmay Kirtane. I was really looking forward for this hike but suddenly I had to cancel the hike because of some personal emergency for which I had to go outside Pune over the weekend.

After coming back to Pune, I decided the next date for the hike would be the next immediate Saturday, 16th Nov. Unfortunately, Sandeepak was not available on this date and I hadn’t contacted Chinmay regarding his availability. I was in dilemma whether to continue with the same hike plan or join other group for a different hike. Suddenly, as I was discussing my hike plan during lunch break, my colleagues who had done the earlier hike to Shivneri with me, showed the interest in joining me and we finalized team of 4 during the lunch break itself. I also invited Chinmay Kirtane and he readily agreed to join. So finally we formed a group of five which is a nice number to hike; a group of five can be accommodated in a car and even if a member can’t make it the last moment, four is also a good number to hike.

Avinash More, Amol Chandurkar and Chinmay Kirtane gathered at my place around 6.30 in the morning and we picked up Siddheshwar Kadam from the Sinhagad intersection on the Pune-Satara highway and proceeded further on the highway. Avinash was driving his car and we took our first halt at Amrita food joint on the highway and after breakfasting continued the further travel. We took the left turn from the Bhuinj village and confirmed the directions to Kekali from few villagers.

We spotted a beautiful temple just before reaching to Kekali village. We stopped to click few photos. 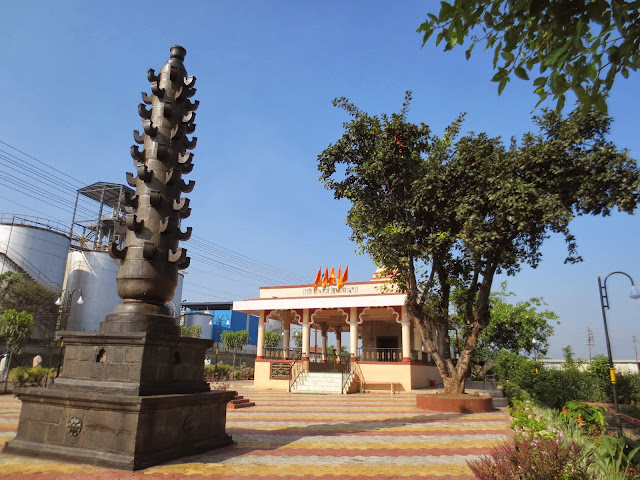 We parked our car in Belmachi village which is just next to Kekali village. Though I had the map regarding directions and all the information related to forts with me, I thought it would be better to hire a guide. There were quite a few young boys chatting in the area where we parked the car and I asked them whether any one of them could come as a guide. One of the guys was ready but was asking 1000 Rs which was too much and somehow we did not like the attitude of the boys and did not pursue any further discussion with them and proceeded without the guide.

It was around 10 in the morning when we started our climb. It was very hazy and not a great weather for photography as sun-rays were directly coming on the camera lenses. 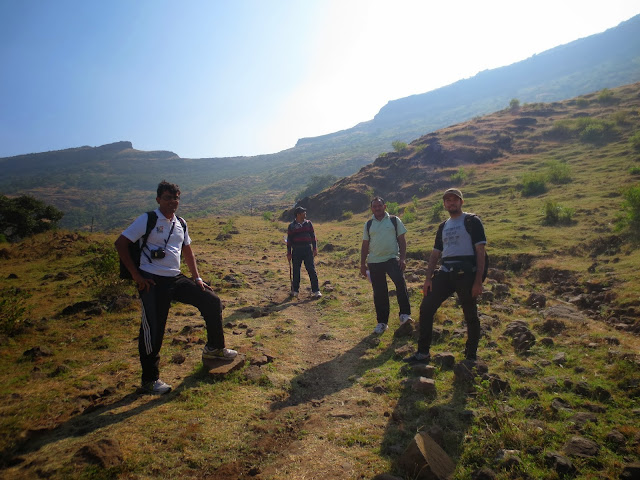 Our first target was to reach to the Mahadev temple which was hardly 10 minutes climb from the base. Soon, we reached to the temple. 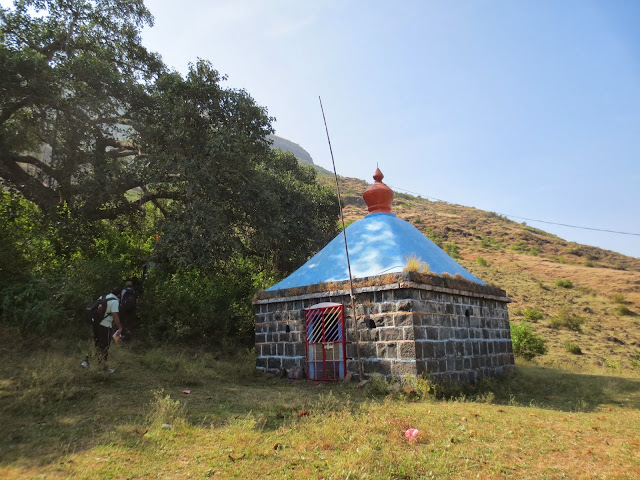 Inside the Mahadev temple: 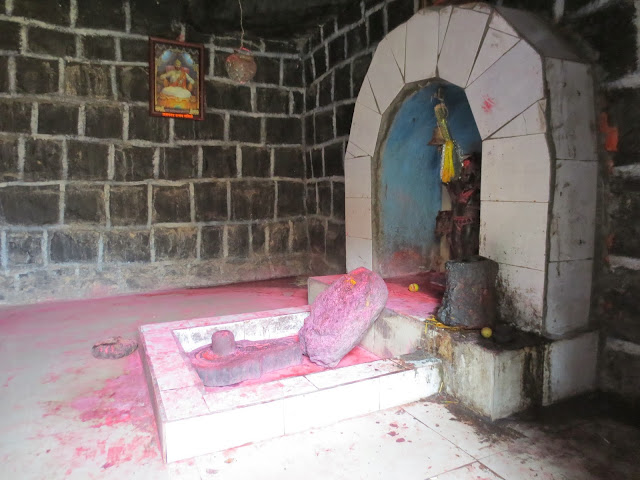 Our next target was to reach to the col (khind) between Chandangad and Vandangad. Col was situated on the left side of the temple and we followed the dirt path which was leading us up and to the left. Unfortunately, at the end of the hike, we came to know that this was the wrong route we followed and simpler route was available if we would have gone straight instead of left. 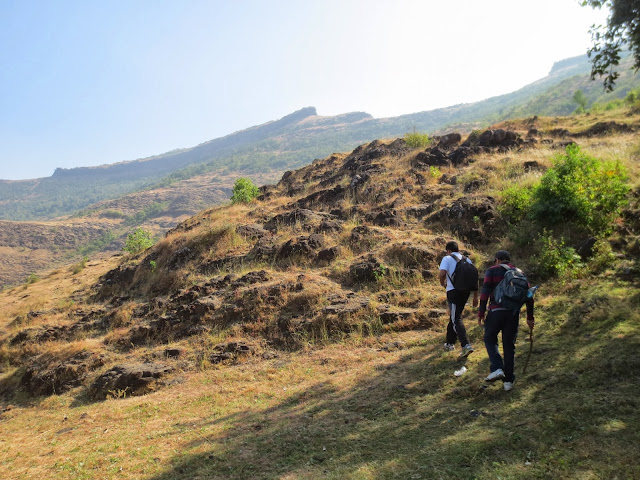 Sun was starting to beat and climb seemed exhausting. It was almost 45 degrees climb. 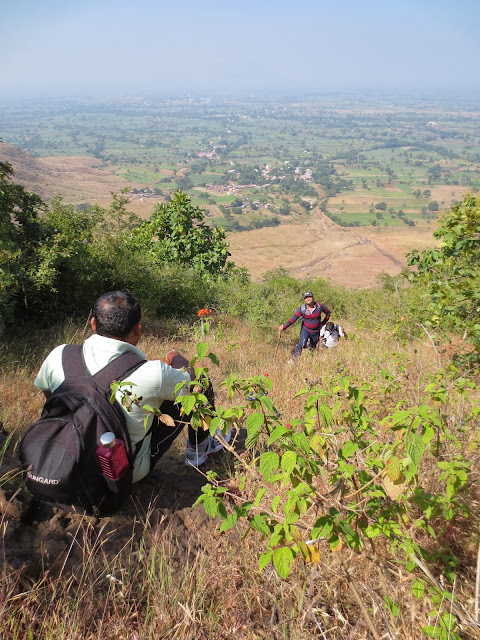 It was difficult to follow the trail because of the presence of tall, dry and yellowish grass . We lost trails couple of times. At one point, we had thick vegetation in front of us which we had to cross to reach towards the col. But the vegetation was too thick to enter and we had to search for multiple trails in order to cross the patches of vegetation. Couple of abandoned chappals provided us the comfort that we had not entirely lost and the route was frequented by other people in the past. Finally, we managed somehow and came out of the vegetation and found ourselves joining the trail on left of the col. We heaved a big sigh of relief and overjoyed with the feeling that our ordeal to find the route through the thicket was over! 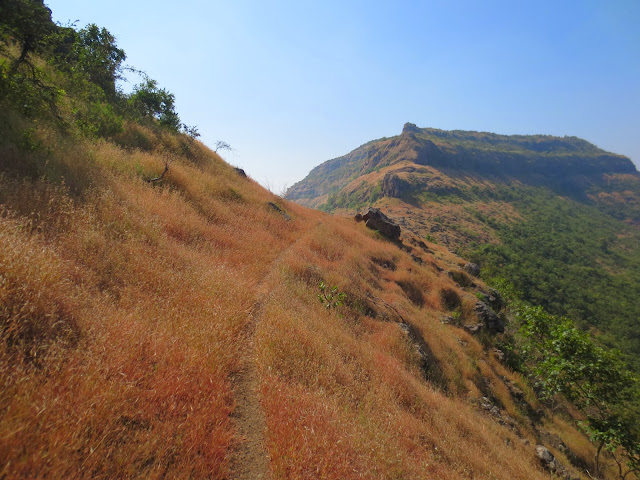 Soon, we reached to the col which joins these twin forts. It was considerably wide and offered us beautiful views all around. Cool breeze comforted us and provided us good, refreshing break.

From the col, rock patches of Chandan were visible and we rewarded ourselves by clicking few of our photos.


Both the sides of Vandangad were looking breathtaking in the background.

Chandangad, at an height of @3800 ft, is said to have been built by King Bhoj II of Shilahar dynasty. It was overpowered by Chatrapati Shivaji Maharaj in 1673. It was ruled by different dynasties during different periods.

From the col , you need to traverse the whole length of Chandangad to reach to the entrance of the fort. This is confusing especially if you are not aware beforehand the exact location of the entrance gate. 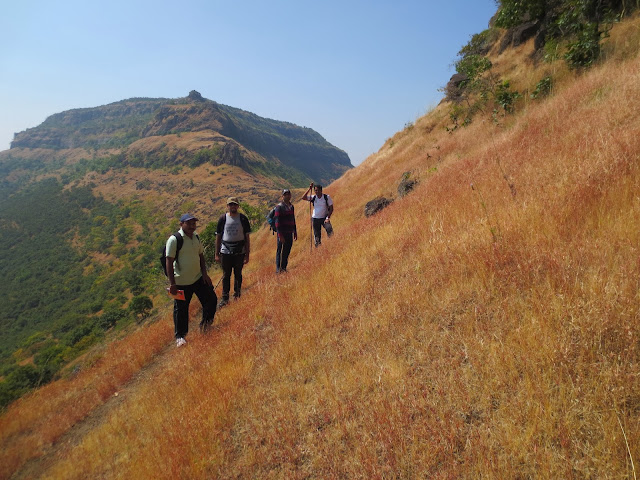 Keep the Chandangad on your left as you walk on the small dirt trail. There is almost 45 degrees slope on the right side of the trail. You may have problems if you have acrophobia. 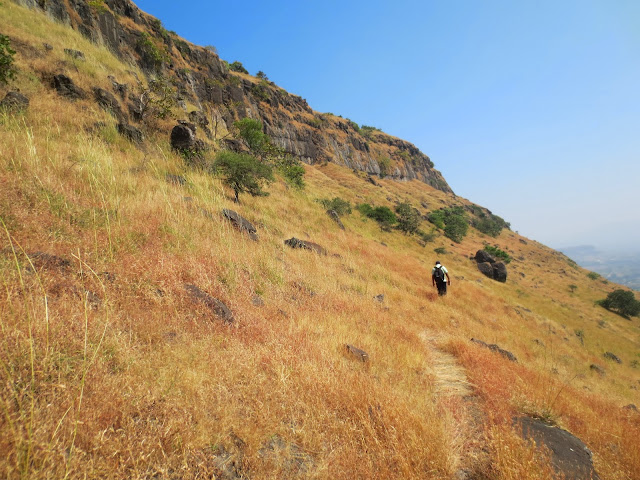 After traversing the whole length of the fort, walk further to cover the breadth of the fort and reach to the other side where you come across series of steps. 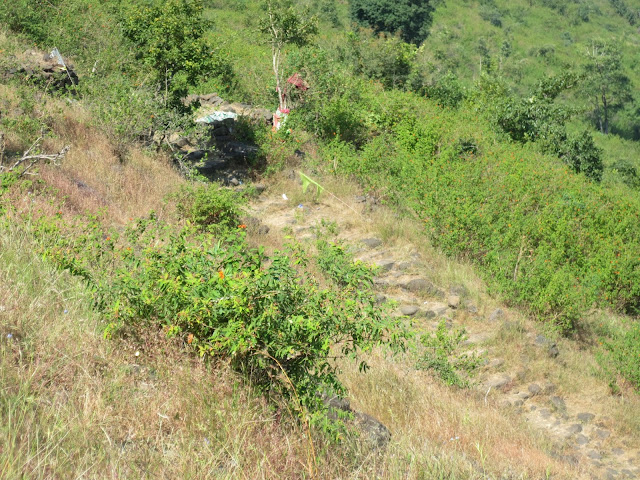 After climbing the steps, you come across a gate like structure. 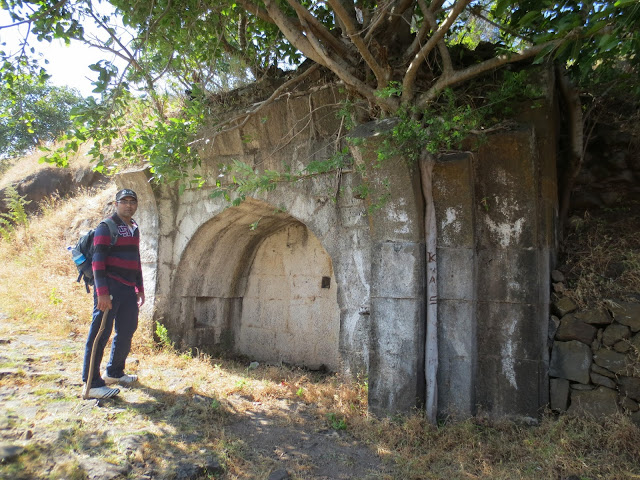 There is a small tomb in front of this gate-like structure. 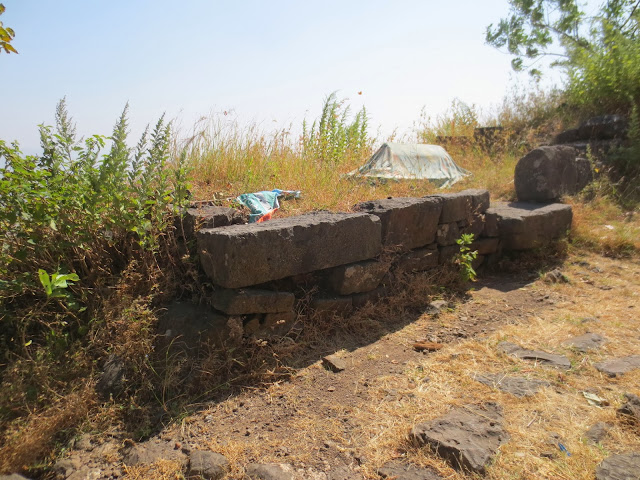 After going further, you come across an ancient temple.In the month of ‘Shravan’, the fifth month of Hindu year, pilgrims visit this temple every year. 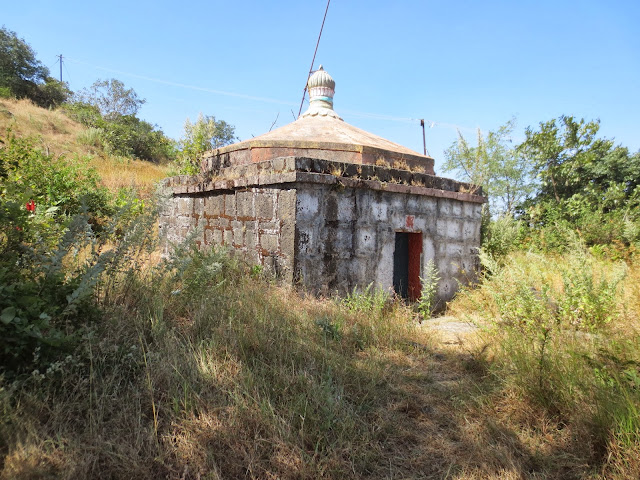 Inside the temple, there are two "Pindis" that encompass five "lingas". 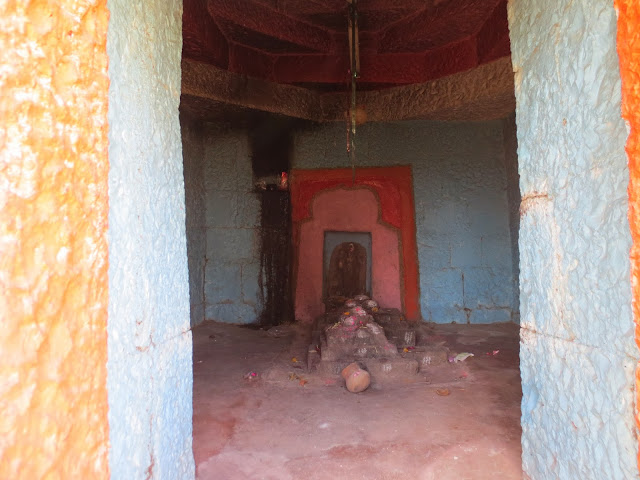 Right beside the temple, there is a place called as "Paachvad" (group of 5 banyan tress). We all were exhausted because of the sweltering heat. So resting under banyan trees was quite a heavenly experience and we had to push ourselves to come out of the shadows under which we could have slept for hours. 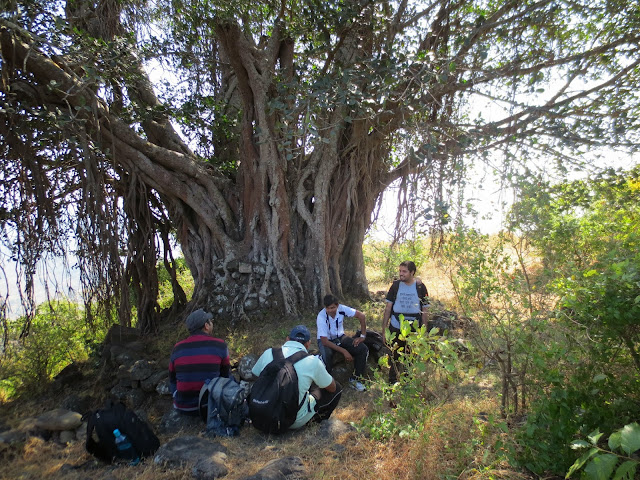 Few steps ahead of the temple lies the two structures of the stones stacked on each other. This is something unique on the fort and you just keep on wondering how on earth these huge stones were put and what was the underlying reason of it. 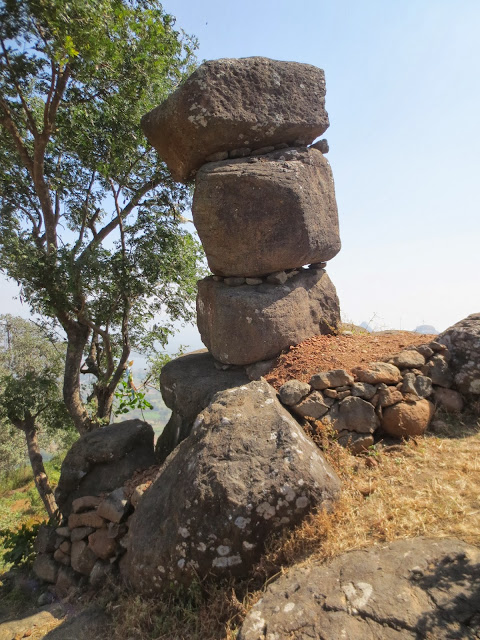 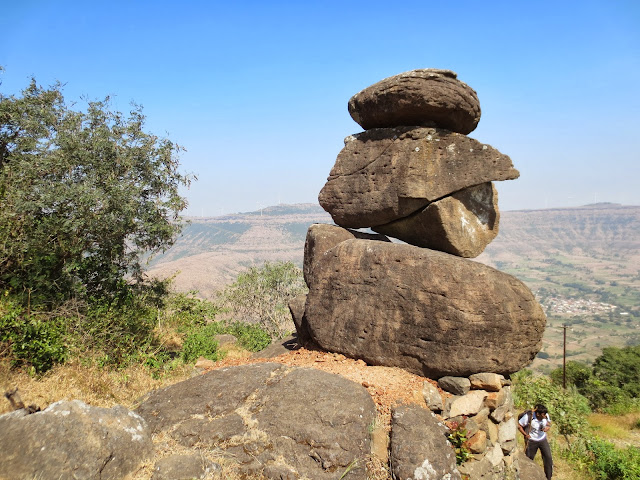 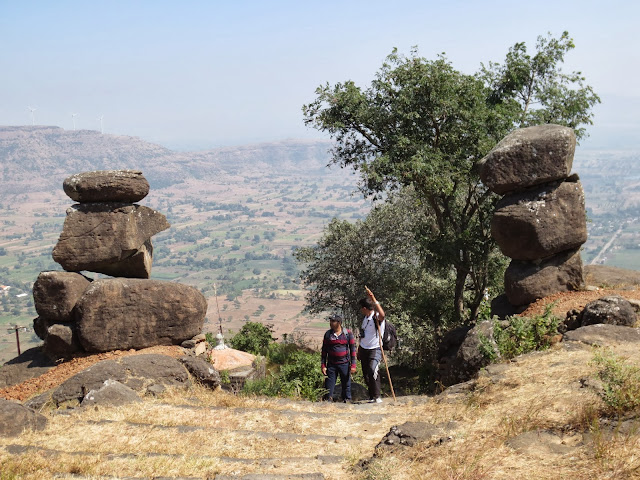 After entering through the stone structures, you come across a well maintained mosque. 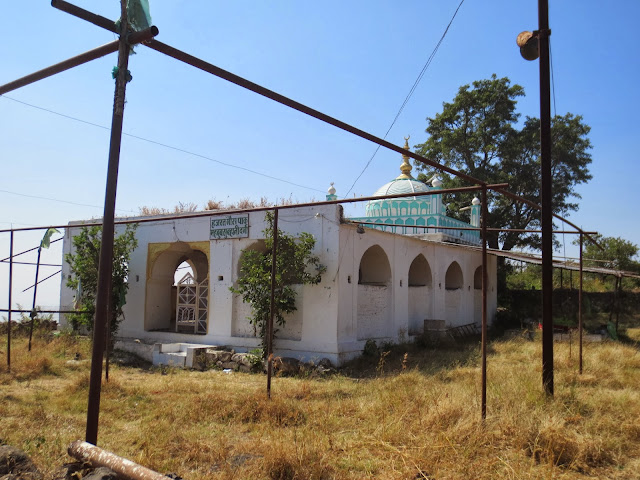 After going further, you come across a big well. 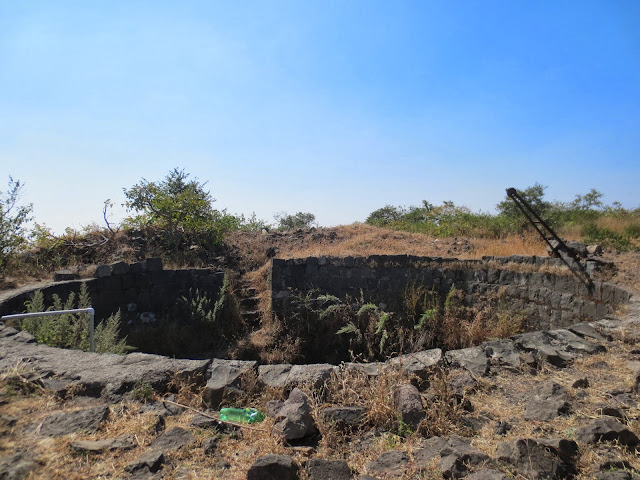 There was a lot of yellow and dry grass on the fort and at some areas, it was of waist high. It was limiting our visibility to a great extent and after plodding through the grass, lot of little thorns were getting attached to our trousers and t-shirts. 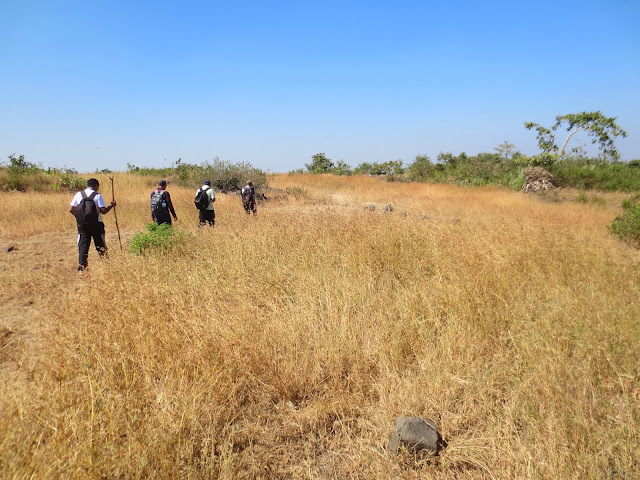 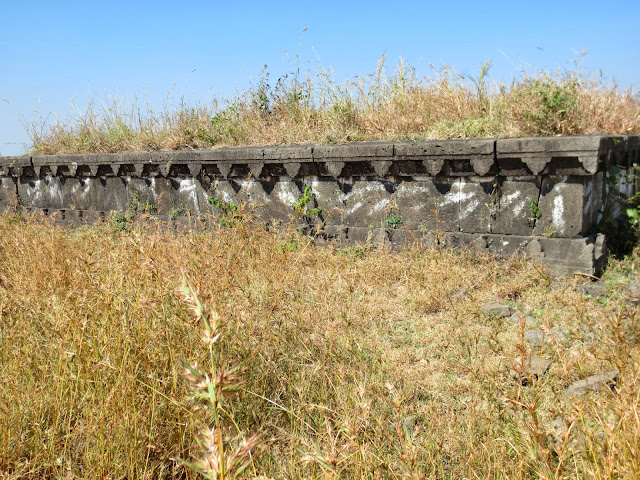 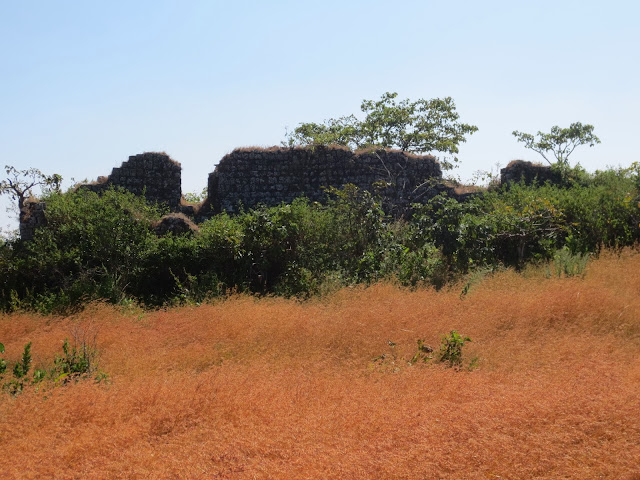 After visiting ammunition depot, we wanted to check whether we can avoid the whole traverse to reach to the col but after confirming that there were many rock patches along the way, we decided against taking the probable short-cut.

View of Vandangad was mesmerizing. As we were still not sure whether to take the left or right trails to go to top of Vandangad, suddenly I remembered the binoculars that I had had in my backpack. Relieved, I took it out and observed through it to see whether I could trace the route. I tried it for a while; I was able to see two clear trails once on the left and one on the right but very small trail was visible and nothing seemed to go on top of the fort. Avinash and others tried the same but in vain. Well, our confusion was compounding and Vandngad was looking more mystic and intriguing. I was somehow repenting that we did not bring along the guide and annoyed with the information which was provided in the book and some internet blogs. 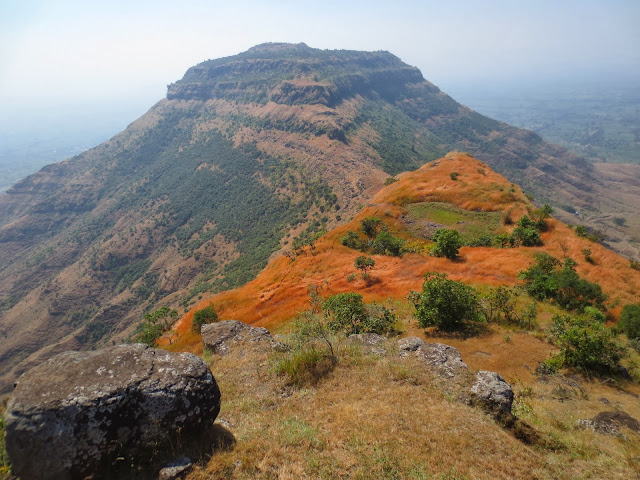 It was past 1.30 in the afternoon and we were craving for the lunch. We stopped in the shade of the stone like structures and finished our packed lunch, full of variety but still dry. 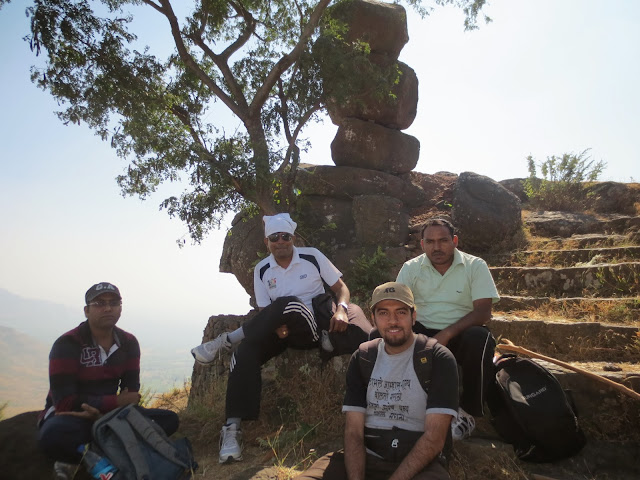 After a lunch, we rested for a while. We were still not sure of the exact way to reach on top of Vandangad and suddenly serendipity came our way.We saw couple of villagers approaching our way.  We were overjoyed to see these heavenly souls and asked them about the exact route to reach on top of Vandan and they readily provided the required information. We thanked them profusely for their timely help and they proceeded further to the Mosque to offer their prayers.

Soon, we returned to the col by traversing the whole length of the fort. It was getting hotter and hotter though it was not supposed to be so hot in the mid of November. But nature has its own way to challenge us and we just need to accept it and move along.

As soon as reaching the col, we dropped our bags and rested for a while. As all were resting, I went ahead to check rock patch of Chandangad. Well, the rock patch that we were seeing from the col was not at all difficult and I negotiated it in couple of minutes. As I was wondering why nobody had advised to go through the rock patch, I looked ahead and stunned to see the real rock patch slicing the sky. It was a real humbling experience just to stand in front of this rock patch.

I called out to my other trek-mates to come and watch the real rock patch which was not visible from the col but it seemed they were really tired to climb and ignore my callings. 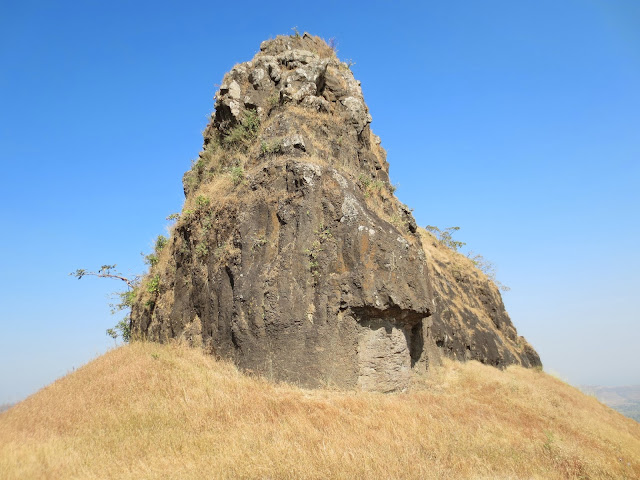 Looking back, whole expanse of the col and Vandangad was visible and I couldn't have asked for a better sight than this one! 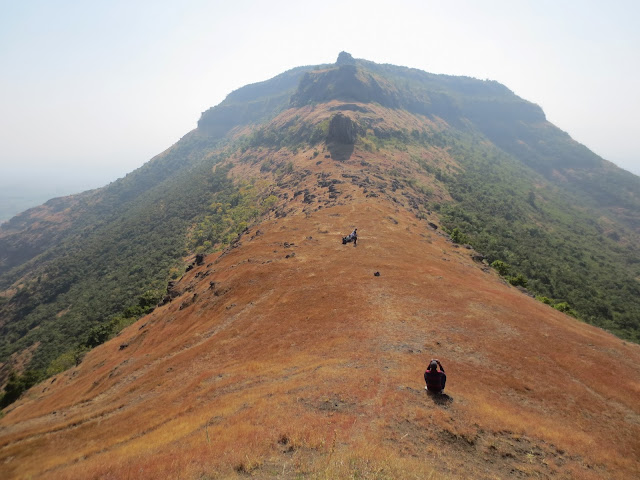 Soon, I climbed down to join my friends. Avinash was really enjoying his time with binoculars and was engrossed in observing the landscape. 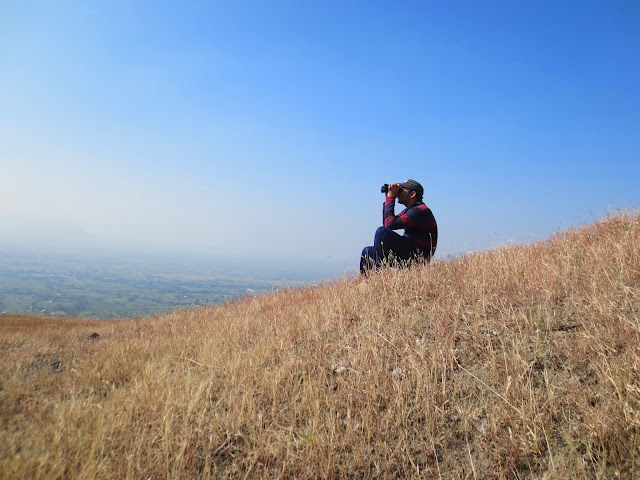 We proceeded towards Vandangad. Looking back, Chandangad was silently bidding adieu to us and asking us to come back again! 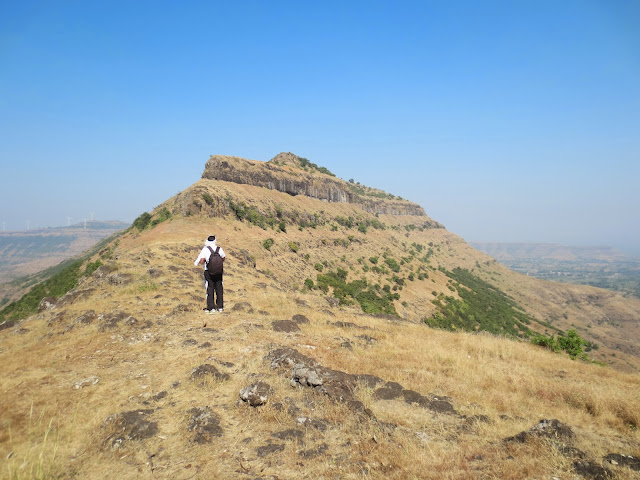 It was now time to unfold the mystery of the majestic Vandangad.