"Wilderness is not a luxury but a necessity of the human spirit and is as vital to our lives as water and good bread."  - Edward Abbey

As I am becoming a habitual hiker, I can resonate with this quote. In fact, more than a hobby, slowly hiking is turning out to be an irresistible compulsion. Venturing into the woods, scaling the mountains, walking miles and miles aimlessly soaking in splendor of nature and breathing the fresh air invigorating mind and soul give me the feeling of being really alive.

After my splendid hike to Chandan-Vandan twin forts in Satara region, I finalized the hike to Chavand fort in Junnar region on 30th Nov. It was a while (almost 5 months) since I visited Shivneri in Junnar region and it was time to revisit this part of the country again. Great thing about staying in Pune that you can do a lot of day hikes in many nearby different regions.

This time I invited seasoned hikers to hike with me as I wanted to cover two forts “Chavand-Narayangad” in a day. "Chinmay Kirtane" who earlier had accompanied me during hikes to forts Sankshi and Chandan-Vandan  readily agreed for this hike without a second thought. "Kailas Kawade" whom I had met at Vasota trek with "Wild Trek Adventure Group" joined by taking leave on Saturday. This shows how passionate he is about hiking. "Paresh Amrutkar" who is my nephew and son of seasoned hiker (Sanjay Amrutkar – a great photographer, hiker and author of the book “101 Trekking destinations – Nasik Expanse”) agreed to join. He happened to be the youngest of all. Rajesh Khare, my friend and society-mate re-prioritized his other tasks to join this hike on Saturday. Finally, we formed a nice group of five, I being the only common thread as rest of four were meeting for the first time.

We started around 6 in the morning in my car from Sus Road, Pashan and picked up other trek-mates from Pune University and Shivajinagar. You get really hungry around 7 in the morning if you get up too early and there is a discussion of the breakfast even if you hardly have covered any distance. So as we had hardly covered half the distance, we halted at a nice restaurant named “Sanskruti” on the way and after having sumptuous breakfast followed by Tea, proceeded towards Junnar. After checking the directions from GPS on Rajesh's smartphone, we proceeded towards the direction of Apatale.

“Can anybody get me hummer”? I was talking, driving and praying at the same time as I was driving my fragile and delicate WagonR on the one of the worst roads I have ever driven. Though I am not into the mindset of owning the luxury car and consider car just an utility to reach from one destination to other, I desperately wanted the robust SUV to ply on the terrible road to Chavand fort from Junnar. Finally, the dreadful drive of 20 kms was coming to an end as we saw first glimpse of the fort which was looking absolutely stunning.

Chavand fort, at an height of 1066 metres (3400 ft), is situated near Junnar region. Under the rule of Shivaji Maharaj, this fort was known as Prasannagad. This fort is part of Famous 5 forts in Junnar region - Chavand, Hadsar, Shivneri, Jivdhan and Naneghat. 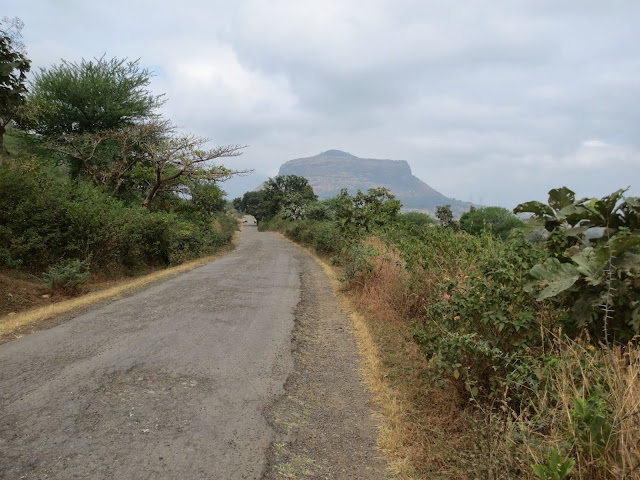 We soon reached to a hamlet named “Kele” from where Chavand was looking imposing. Though villagers told us that we had the option to drive further and park the car directly to Chavandwadi - base village of the Chavand fort, we had enough of the bumpy road and decided to park the vehicle in the same village and proceeded our walk towards the base village of the fort. 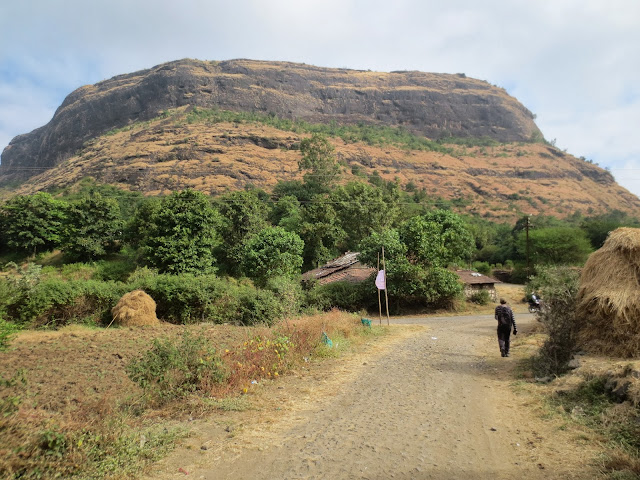 As we started our stroll from Keli village to Chavandwadi village, we were greeted with fantastic landscapes with the backdrop of Sahyadri mountain range. Weather was great; close to be called as pleasant though little on the hotter side and we were really enjoying the walk buoyed by fresh air and splendor around. 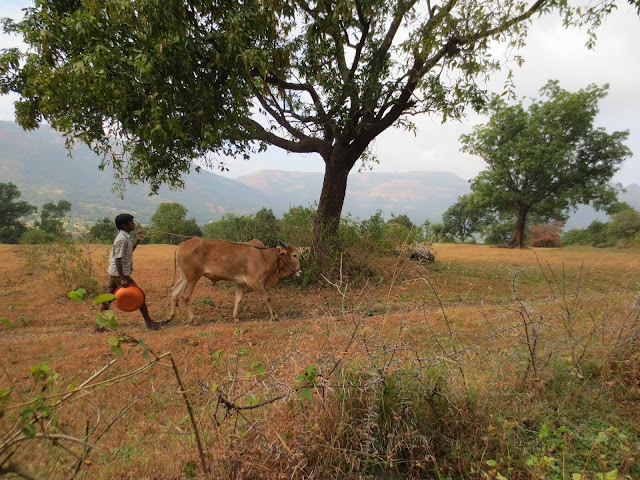 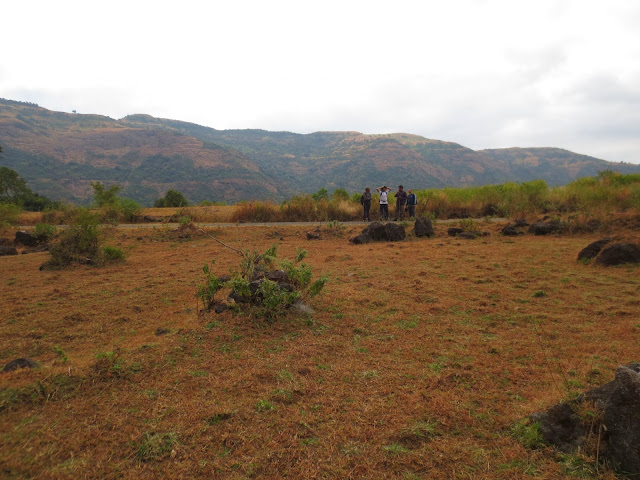 Soon, we reached to the point from where a trail seemed to go towards the fort. Though as per the information, there is a route from the village school, we decided to try this shorter route. Luckily, we saw couple of women from the nearby hamlet washing the clothes near the hand-pump and they confirmed that we could take the said trail. 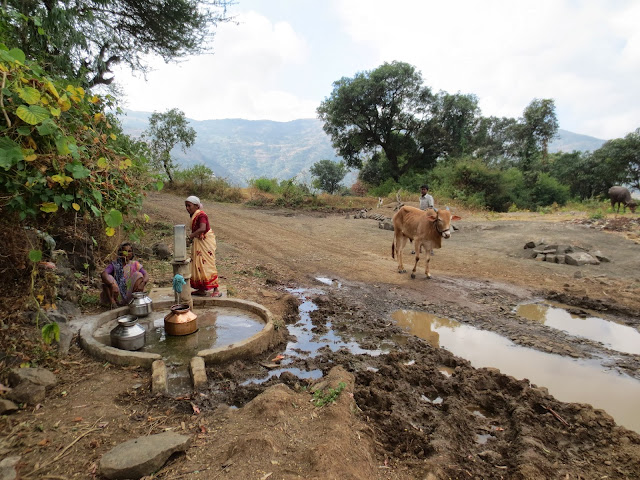 Soon, our trail joined the well-laid concrete steps. Concrete steps at the start of your hike to an ancient fort look odd though this was done as part of restoration. 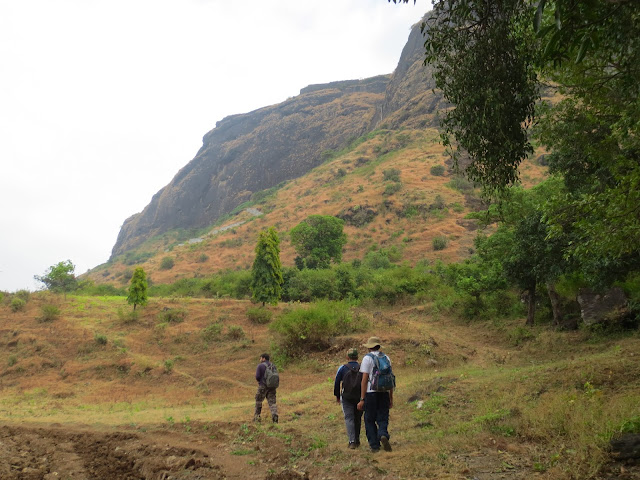 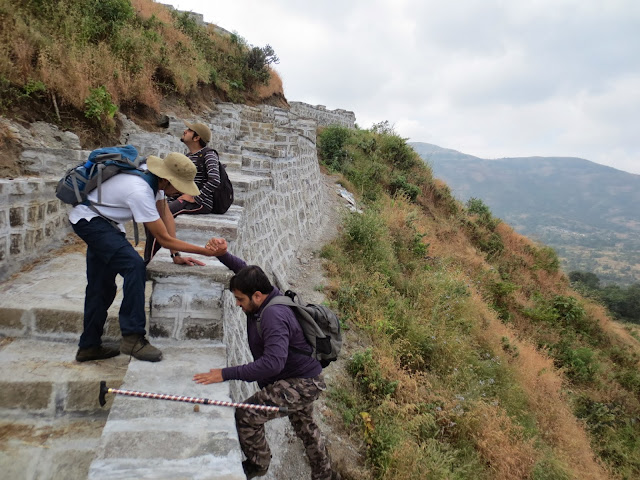 These well laid steps are only for a short distance and then you are on your own to negotiate the climb. It is a short and steep climb. 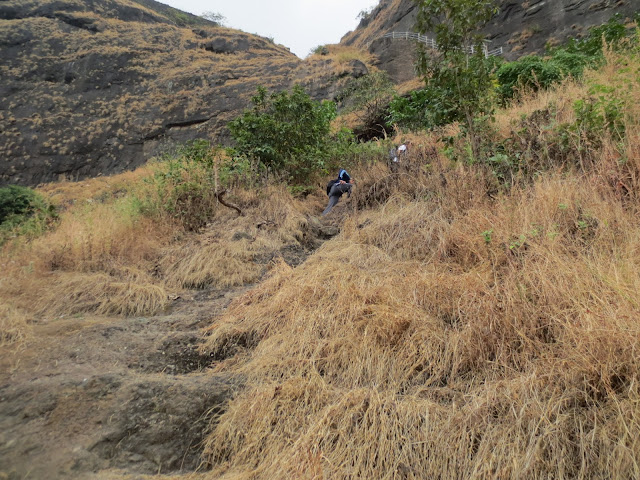 Soon, after a short climb, you come across steep steps with hardly anything left of these steps to put your foot onto. These steps were almost destroyed by the attack by British on this fort in 18th century. For the safety of the climbers, somebody has put the railings. 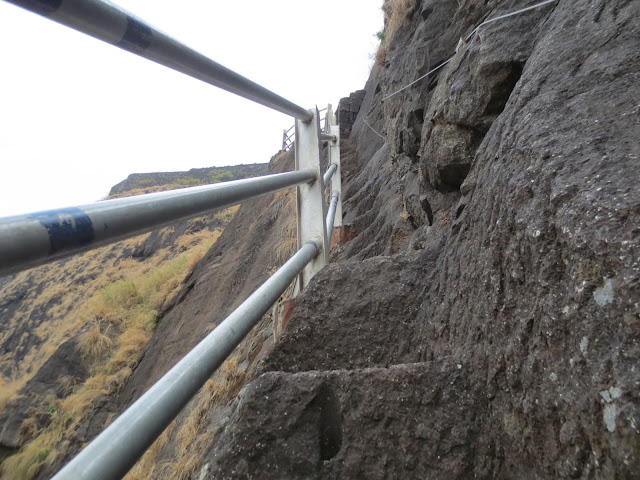 Prior to these railings, there was a rope tied to the cannon which was buried in the ground vertically so that people could climb using the rope. 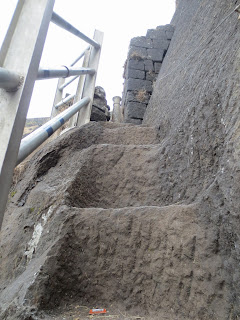 Soon after negotiating these narrow steps, you come across another steps. 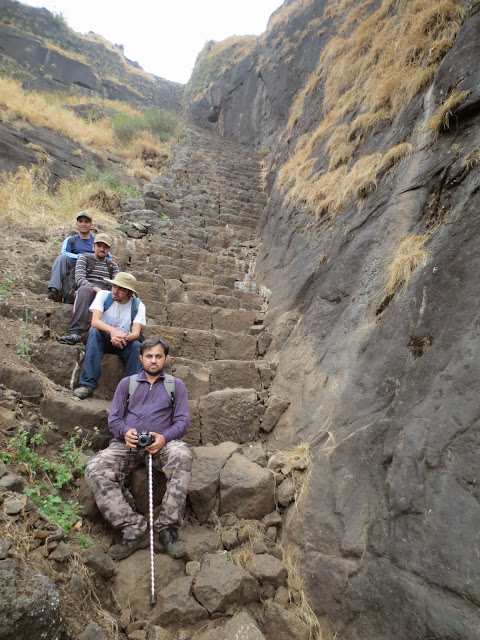 After crossing these steps, you are welcomed by the lone gate to enter the fort. 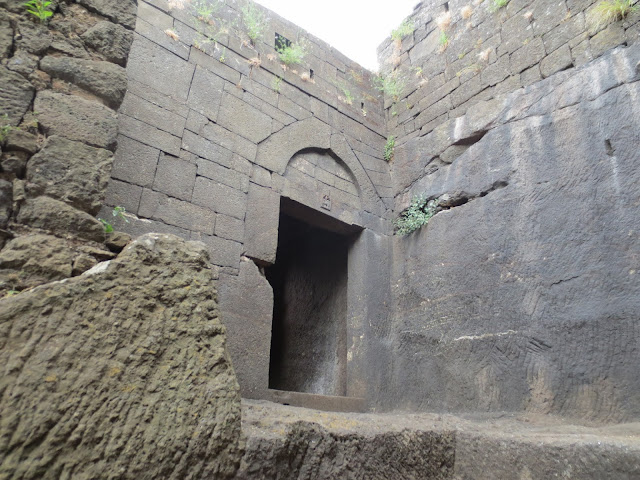 Lord Ganesh carving on the gate 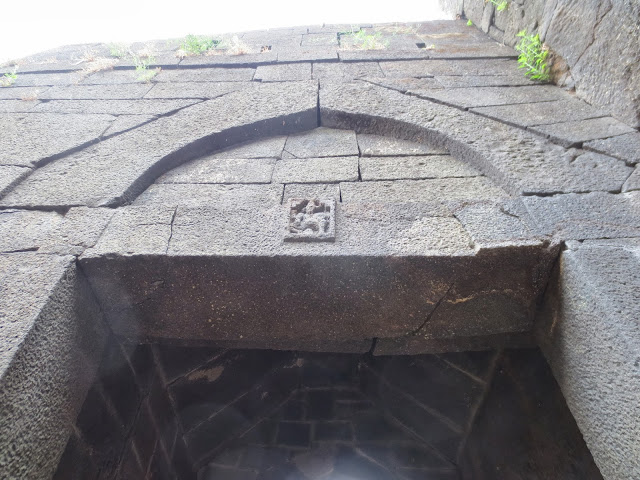 After crossing the gate, you come on top of the fort. There is a small hill on the fort where there is a temple of goddess Chamunda. 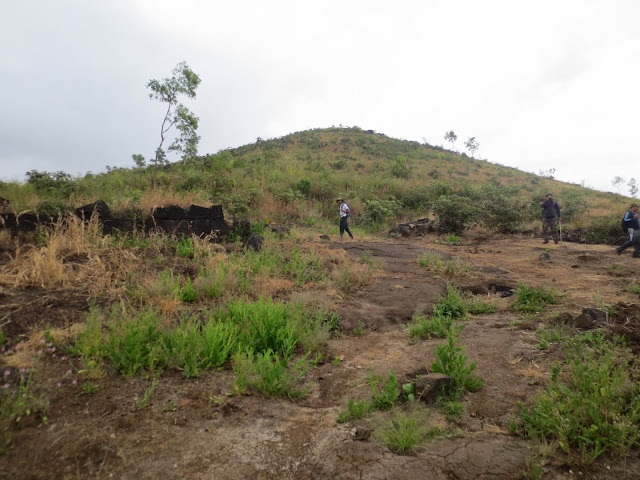 If you follow the left trail, you will soon come across remains of an old structure with small pond beside it. This is called as "Pushkarni". 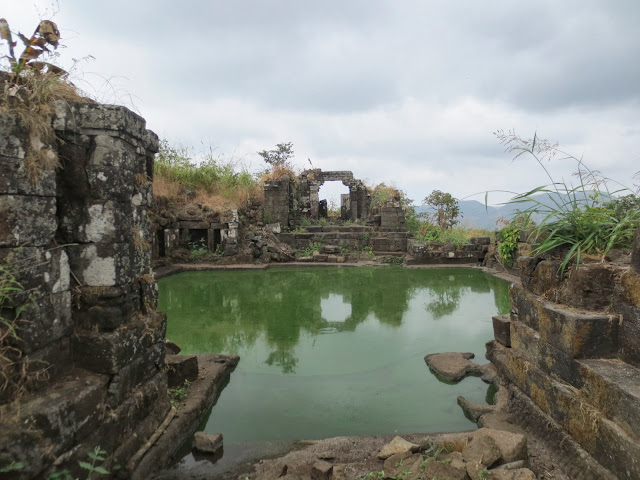 Remains of the structure which must have been beautiful in its prime. 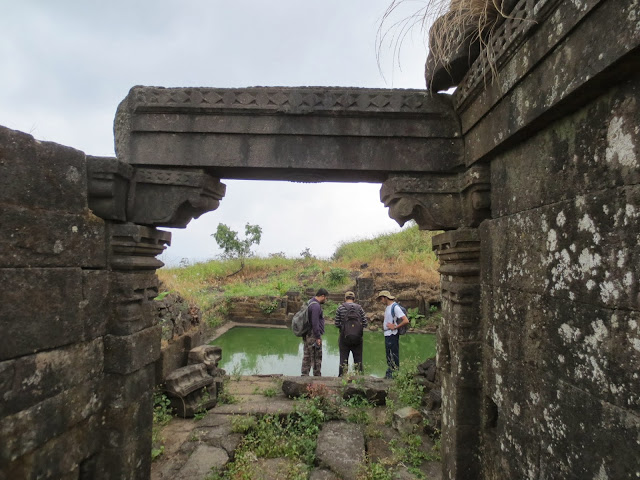 There was a tall grass everywhere and we were not able to spot Saptamatrika - seven water cisterns which has given uniqueness to this fort. As per our available information, we needed to go straight from the Pushkarni. We went straight for about 10 minutes on the south-east side and walked almost to the other end of the fort but could not locate these seven cisterns. We were confused where these cisterns would be. We again returned back to Pushkarni and saw remnants of the structure on the north side. We decided to go in that direction and climbed few steps to go on top of this structure and to our elation, saw the seven cisterns located just behind this structure. Tall grass and the structure had properly camouflaged these cisterns. 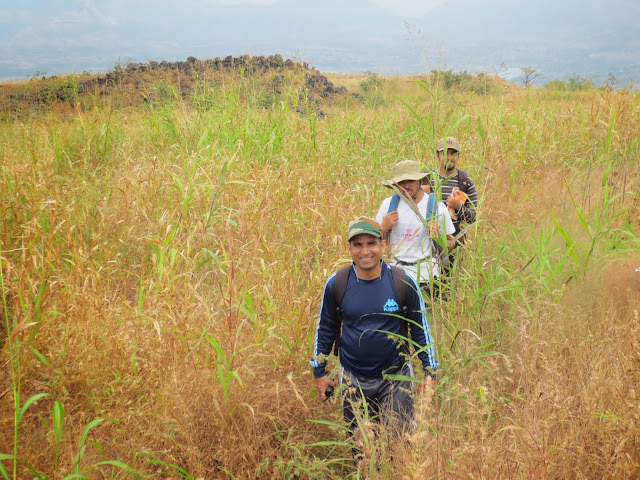 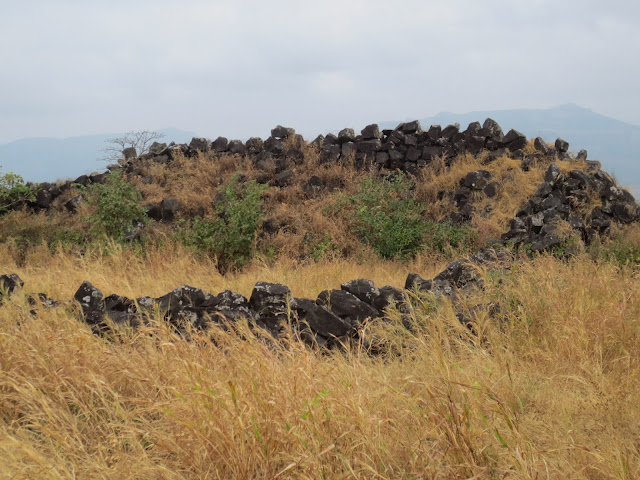 There is a small door with the Lord Ganesha carving on it to enter one of the cisterns: 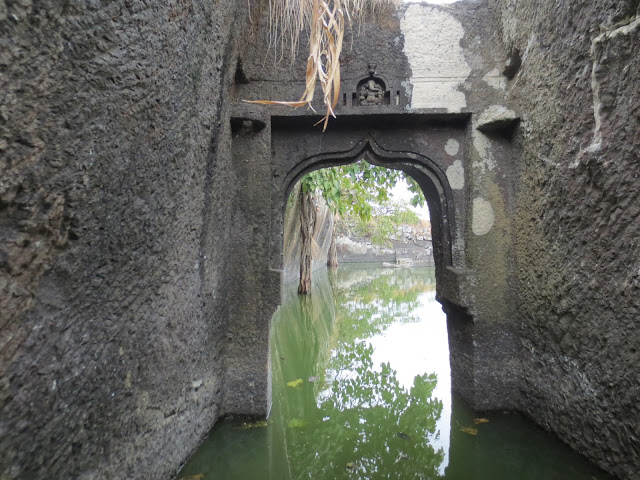 Now, it was time to visit the temple of goddess Chamunda situated on the only hill on the fort. After a climb of 10 minutes, we reached to the temple.Origin of this goddess is said to be from Bengal, Bihar and Mysore and the temple was built by the traders from these regions trading from the Naneghat route. 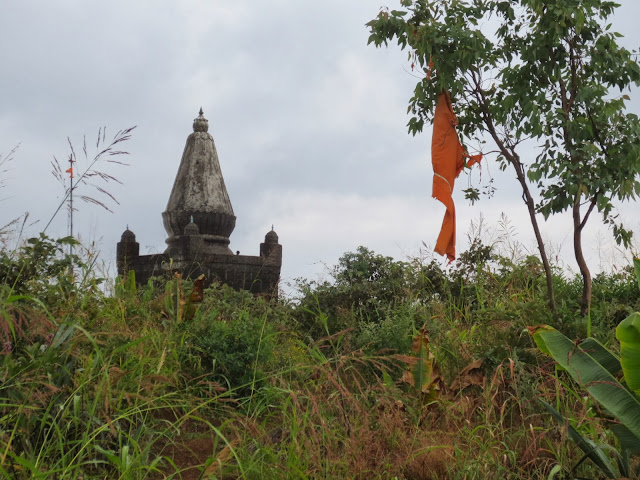 We rested for a while and enjoyed in the cool breeze. It was really a serene place. There is something truly remarkable about the temples on the fort; however exhausted you are, once you spend few moments in the vicinity of the temple, you experience so much of calmness, solitude and bliss that your weariness, exhaustion and fatigue just go away. 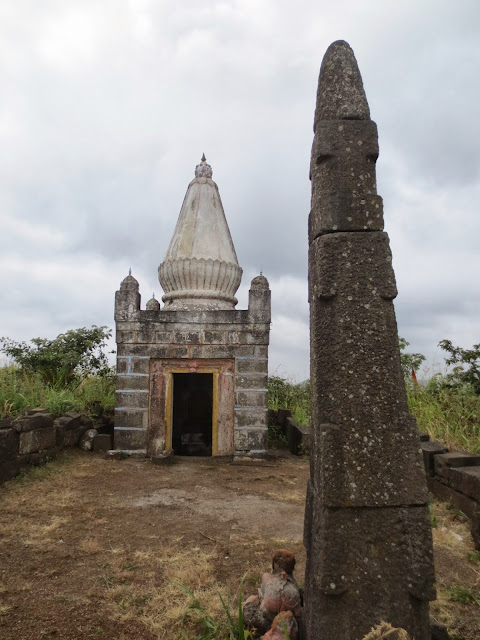 You get magnificent panoramic views of the surrounding mountains in the Sahydari range. You just can't take your eyes off from these picturesque settings. 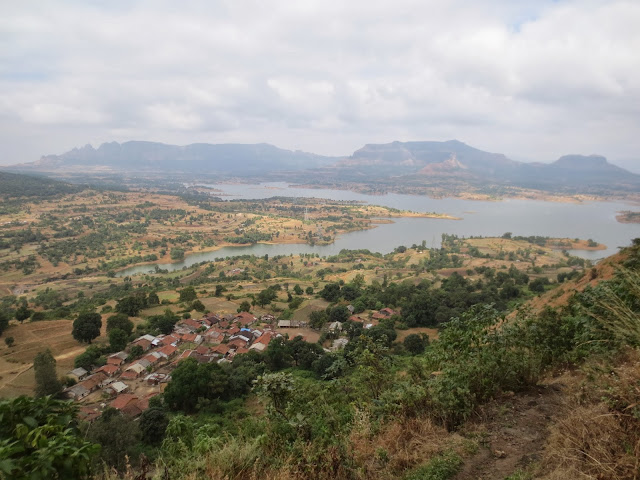 View of Jivdhan fort (center fort in the below picture): 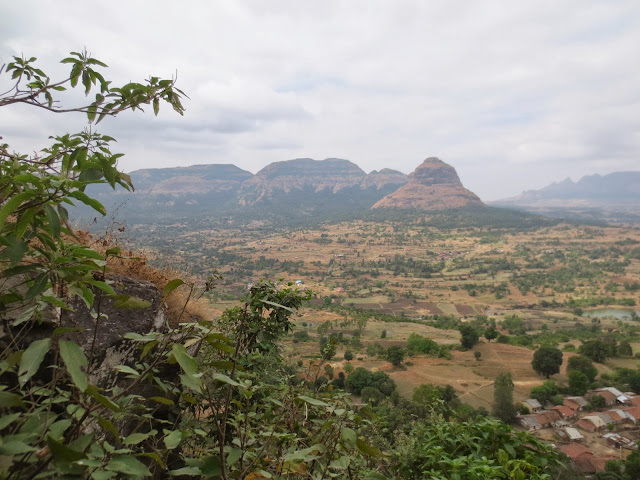 View of fort "Durg" (mountain at the back) 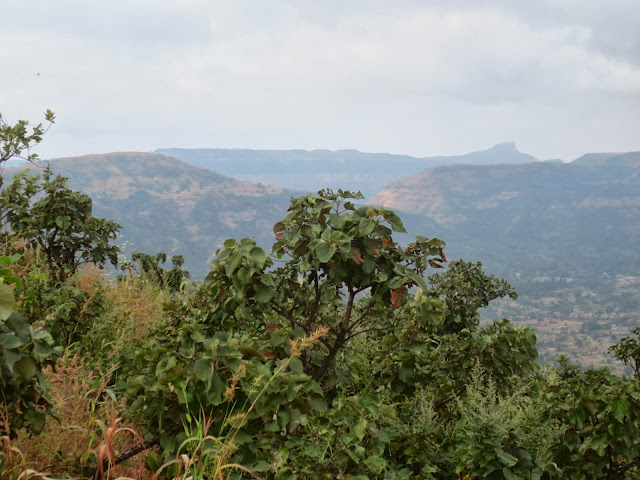 It was soon time to return back as it was approaching one in the afternoon and we had to return to Junnar for lunch.

Some macro photography along the way: 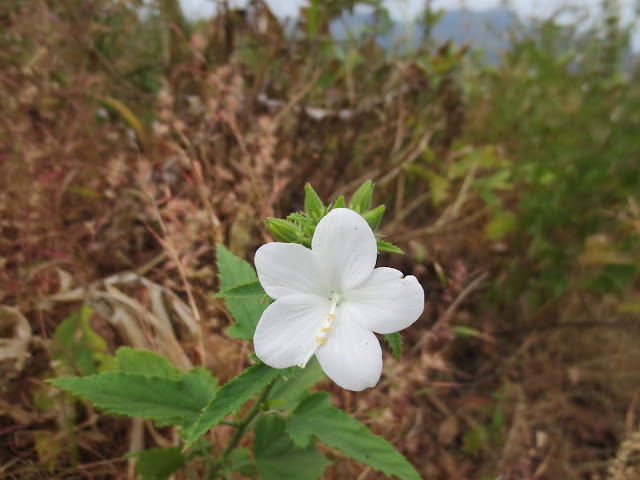 We took the route of stairs to come down to the base to complete our exploration. 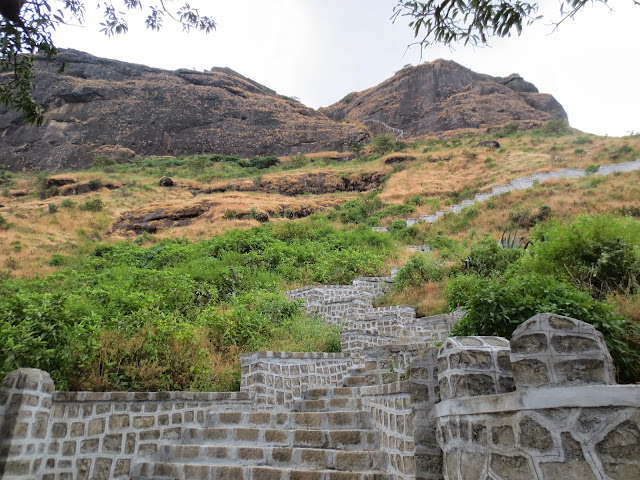 Soon, we reached to the base and walked back to the Keli village where we had parked our car. Small kids were playing and had put some of their toys on the backside of my car. I called them out, chatted and joked with them for couple of minutes and gave back them their toys. 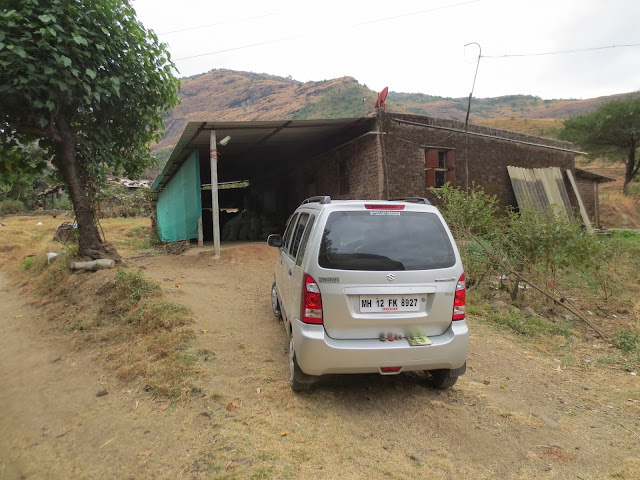 Though we had the option of proceeding further to Kukadi village to witness the beautiful Kukadeshwar Temple, considering the disastrous condition of the road, we decided against it and we took the bumpy ride to return back to Junnar.

We had a light lunch at Junnar and instead of going to Narayangad as per the earlier plan, proceeded to Shivneri as three of my trek-mates hadn't been to Shivneri before. After spending few hours at Shivneri and witnessing spectacular sunset, we returned back to Pune.

There are few places in the world which chime the deep, deep internal temple bell inside us and this was certainly such a place. I have absolutely fallen in love with this part of the country and would like to make umpteen visits to witness the glory of forts in this region.

For all the adventure lovers, perched amidst the picturesque settings, Chavand is ready to welcome you with the open arms.


Thank you for reading the blog!