Mangalgad/Kangorigad - A hike amidst mist, fog and rain

Wasn't it a funny conversation at 5 in the morning? As per the previous night’s plan, all the trek mates were going to assemble in front of Alka Talkies at 5.15 am. As I didn't want to park my car whole day near Alka Talkies, I decided to park my car at my regular trek mate - Sandeepak Phadke’s house at Nal Stop and we were supposed to go together from there by his two wheeler.

I informed organizer Onkar Oak, a dear friend, veteran of 250+ forts and founder of Range Rovers Group that we would be reaching late. Finally, there was some movement in the dark and I was surprised to see Mukta, Sandeepak's wife instead of Sandeepak approaching and helping me to park my car. Sandeepak came down after a while and we were offered a drop to Alka Talkies by Mukta. So nice of Mukta!

Onkar and other trek mates were waiting for us in front of Alka Talkies. Among the trekkers, I was happy to see familiar faces of Akshay Gaikwad and Muthesh Dharma with whom I had done K2S (Katraj to Sinhagad) Night Trek in the month of May.

Soon, Sumo which was supposed to ferry us arrived and we cramped ourselves inside it. We were already eight (excluding the driver) and two more members were going to join us. We started wondering how on earth twelve of us were supposed to travel for so much of a distance and that too with our loaded backpacks. Soon, last member Alok Deshpande, a giant personality joined. Just after sitting for 2 minutes, Alok felt too uncomfortable to sit in the cramped space. Fortunately, Onkar and Alok had the backup plan ready and Alok voluntarily offered to ride his two-wheeler. Onkar was keen to drive along with Alok but Akshay was very determined and persuaded Onkar. Suddenly, there was sufficient space in Sumo and we happily started our journey towards Bhor.

We halted at a restaurant named “Sairaj” which served us Vada-Sambar and Pohe. Highlight of the hikes arranged by Onkar is that he always strives to provide good food throughout the trek and this was no exception. We munched on delicious Medu-Wada Sambar and Pohe followed by Tea and resumed our journey towards Varandha Ghat.

We were greeted by rains as soon as we entered Varandha Ghat. Rain abated as we reached to Waghjai Point and whole setting turned into a picturesque extravaganza. Lush greenery, wet weather, many distant waterfalls were very soothing to the eyes.Waterfalls were cascading from great height at a distance; clouds were hovering on the cliffs; some times cloud cover lifted for a while offering us intermittent views of the amazing mountain ranges. I was so transfixed to the quaint views that I had to be dragged to drink a cup of tea. 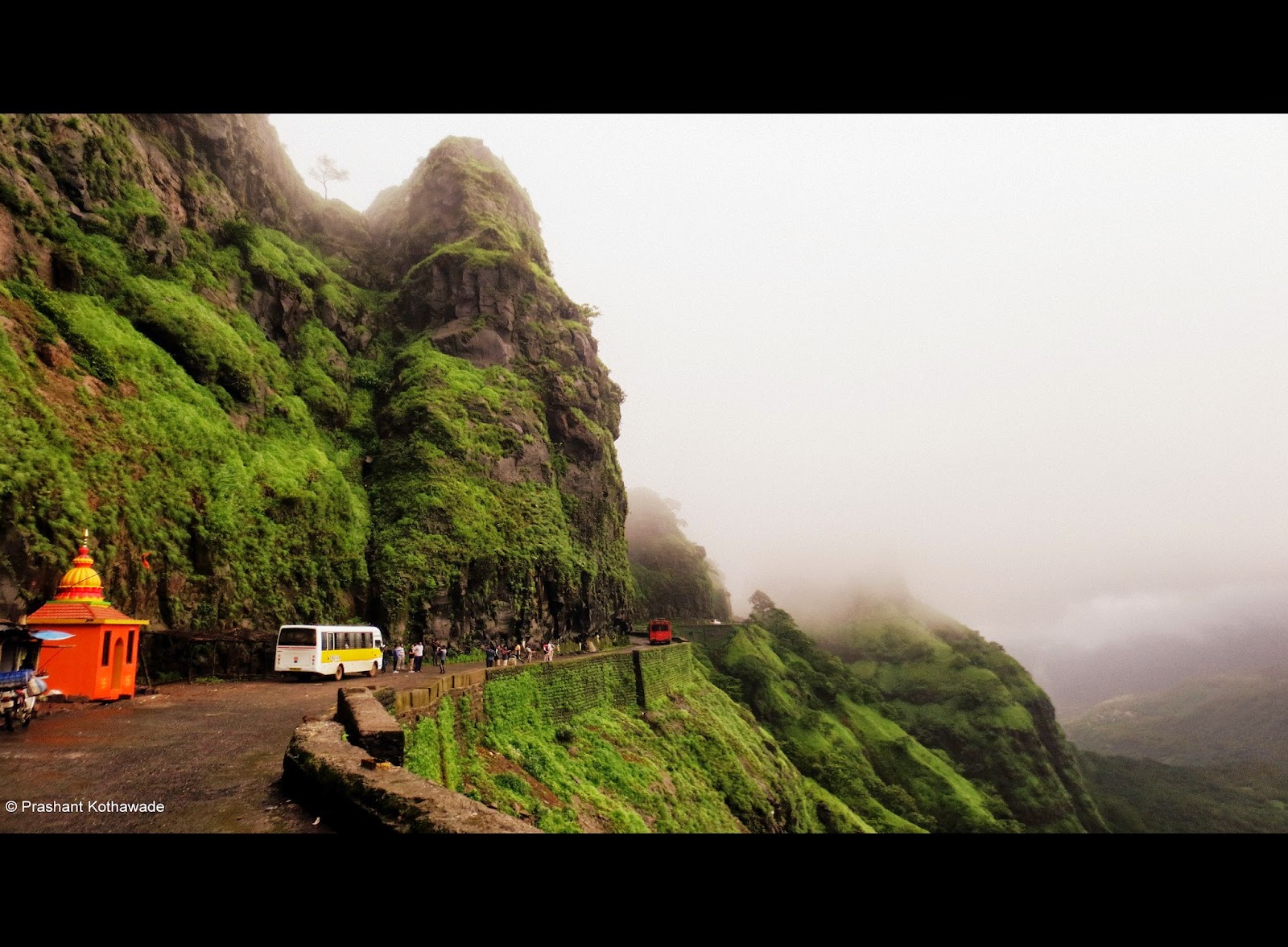 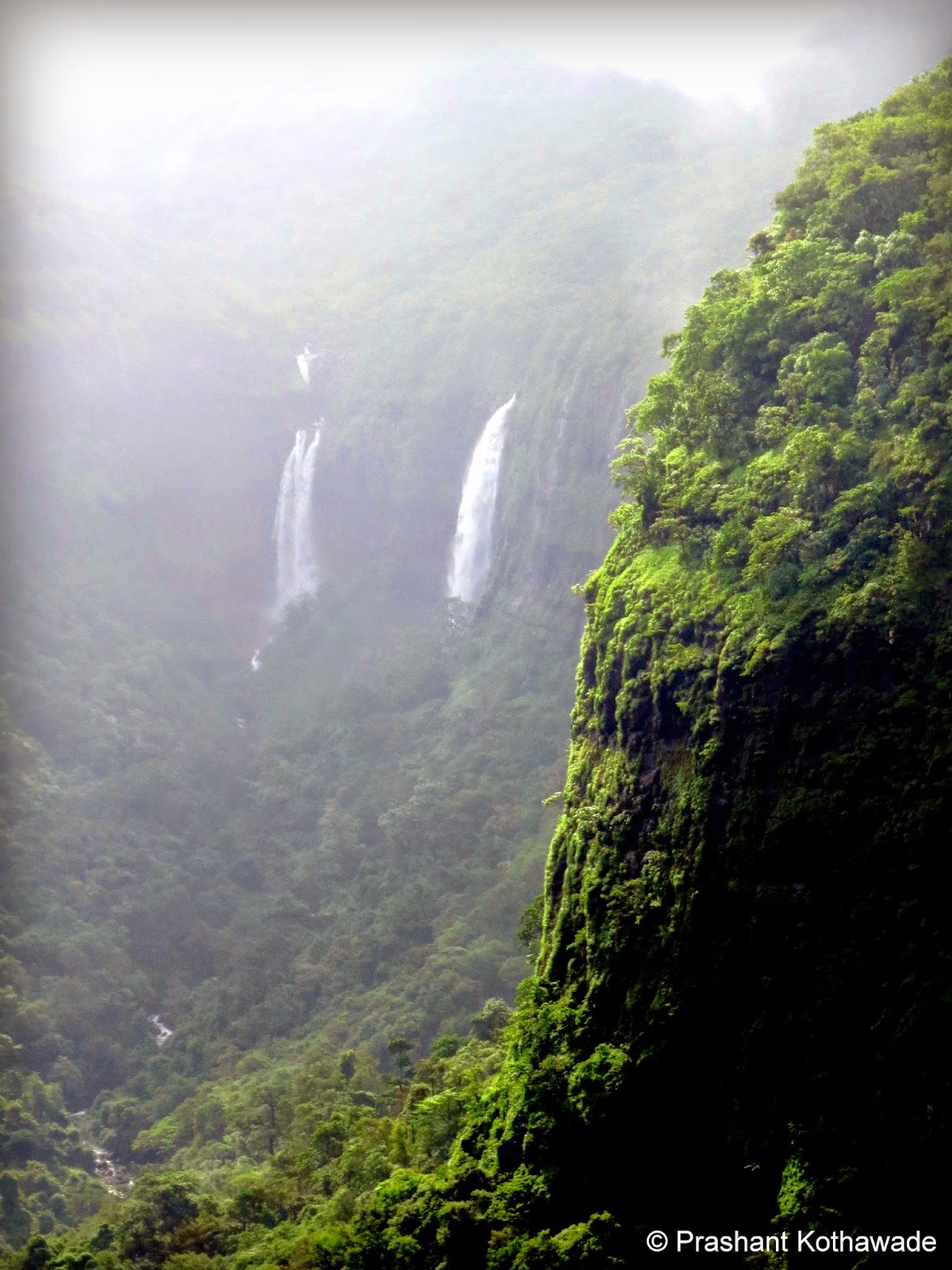 We were treated with a Gavati Chai, a herbal Tea. As Tea was getting prepared, Onkar took out his mouth organ and started playing the tune of Sholay followed by Hindi Songs "Aye dil hai mushkil jina yaha" and "Mere sapnoki raani". Picturesque setting, rainy weather and magical musical notes – could we have asked for a better Sunday morning? 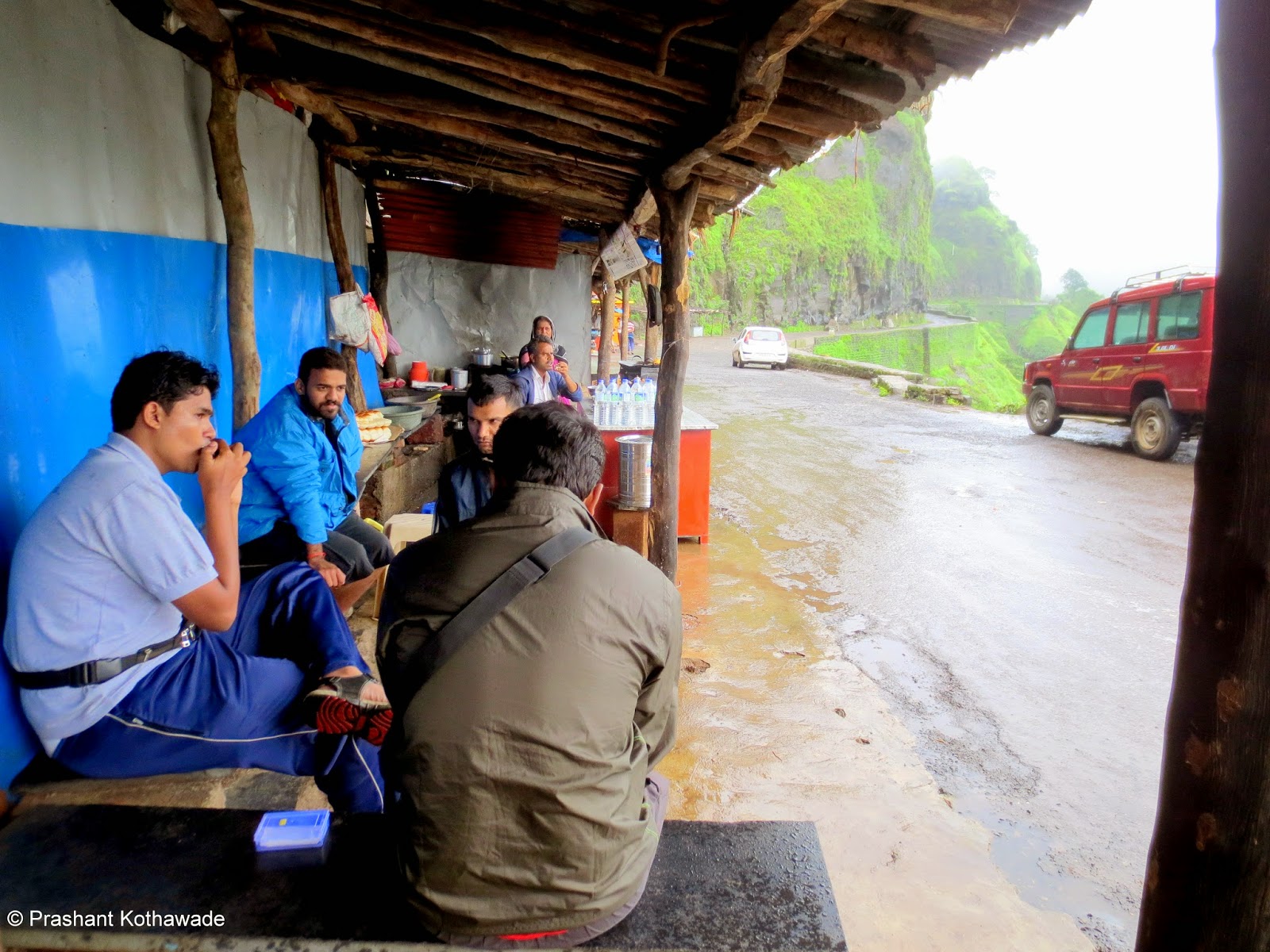 Soon, we crossed Varandha Ghat, crossed the intersection for Shivtharghal after which Onkar narrated us the recent controversy of the exact location of Shivtharghal. Recently, ashram of Swami Arvindnath Maharaj claimed to have found the real Shivtharghal where Saint Ramdas wrote Dasbodh, a classical 17th century Hindu Advaita Vedanta spiritual text. You can read more about it here.

After certain distance, we took a left turn from Dhalkathi village leading us to Pimpalwadi, base village of Mangalgad. Route till base of Mangalgad is exceedingly scenic as it goes through thick vegetation on both the sides. 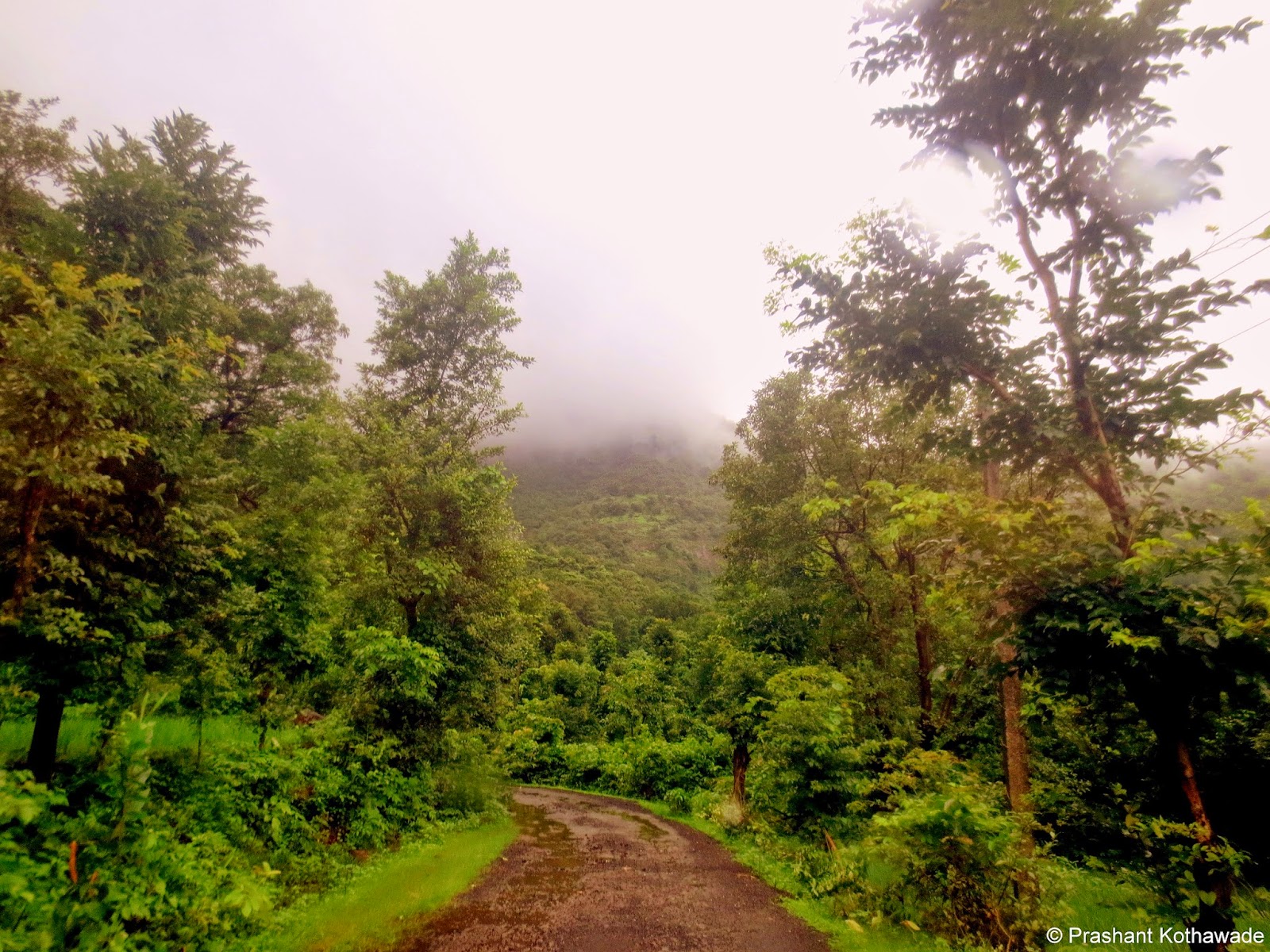 Soon, we reached to the base where we were greeted by a statue of Chatrapati Shivaji Maharaj. 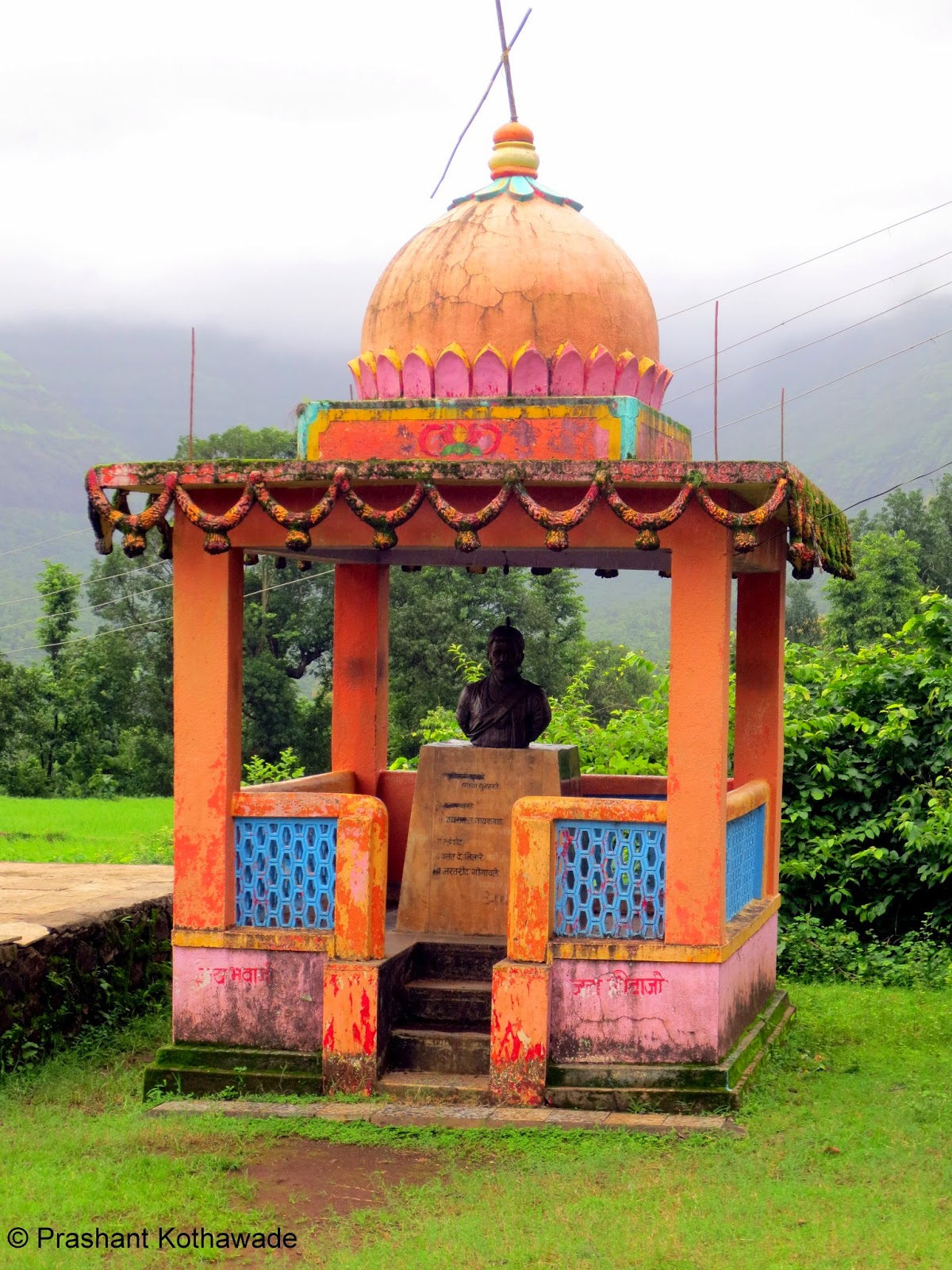 Onkar went ahead at a house to make arrangements for food and take a guide. Unfortunately, guide was not available and we started our hike without a guide. As Onkar and Akshay had already trekked before on this fort, it was not much of a problem. But sometimes it is better to take a guide especially in the rainy weather with a lot of fog and low visibility. As we just had started our hike, few other trekkers were descending. Their efforts to search route for Chandragad were foiled because of low visibility and they were returning back. We confirmed our direction from them and after hearing their disappointment of searching for Chandragad route, Onkar advised them to try Chambhargad near Mahad which they were hearing for the first time and were happy to get something to look forward as their next hike.

As instructed by the group, we decided to take the shortcut where a wooden log was placed on the stream. It was looking dicey and Onkar decided to check it out. As soon as Onkar balanced himself on the wooden long and moved his first foot forward, he slipped and his foot got stuck between the opening in the log. He gradually untangled his foot and came backwards. Fortunately, Onkar just had minor bruises and nothing major to worry about. He still was upbeat to lead us further and we all unanimously decided not to try the shortcut and take the longer, winding route.

Ascent through the longer route was a gradual climb. Rain combined with the dense fog and low visibility made the experience of hiking absolutely magical. Route was passing through dense forest on both the sides and believe me, it was really dense. This is no surprise as the fort is situated in the dense forest of Javali Region. 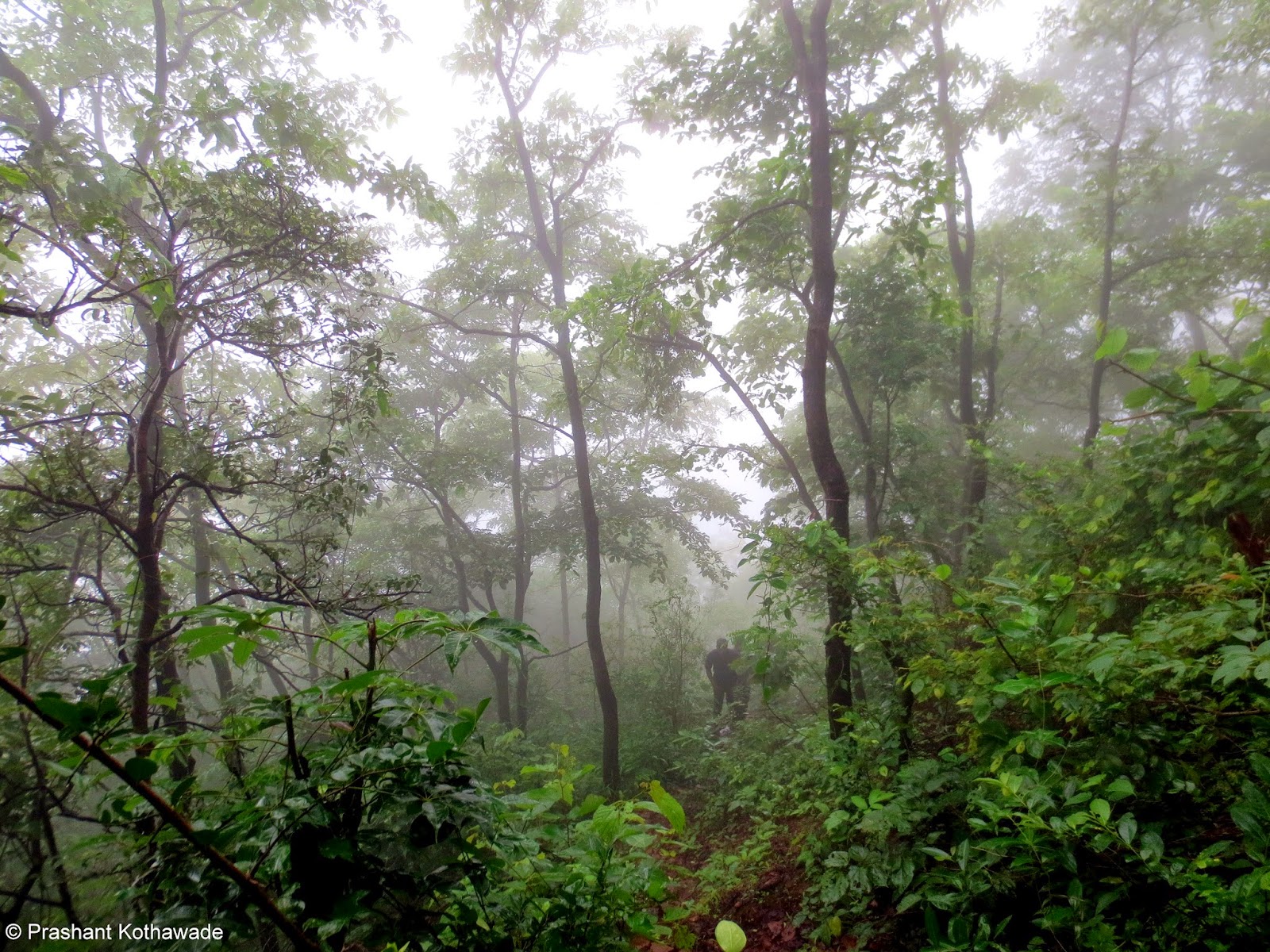 Soon before coming on the first plateau, you need to walk on a very narrow dirt path. There is a steep descent of almost 45% degree on the other side. 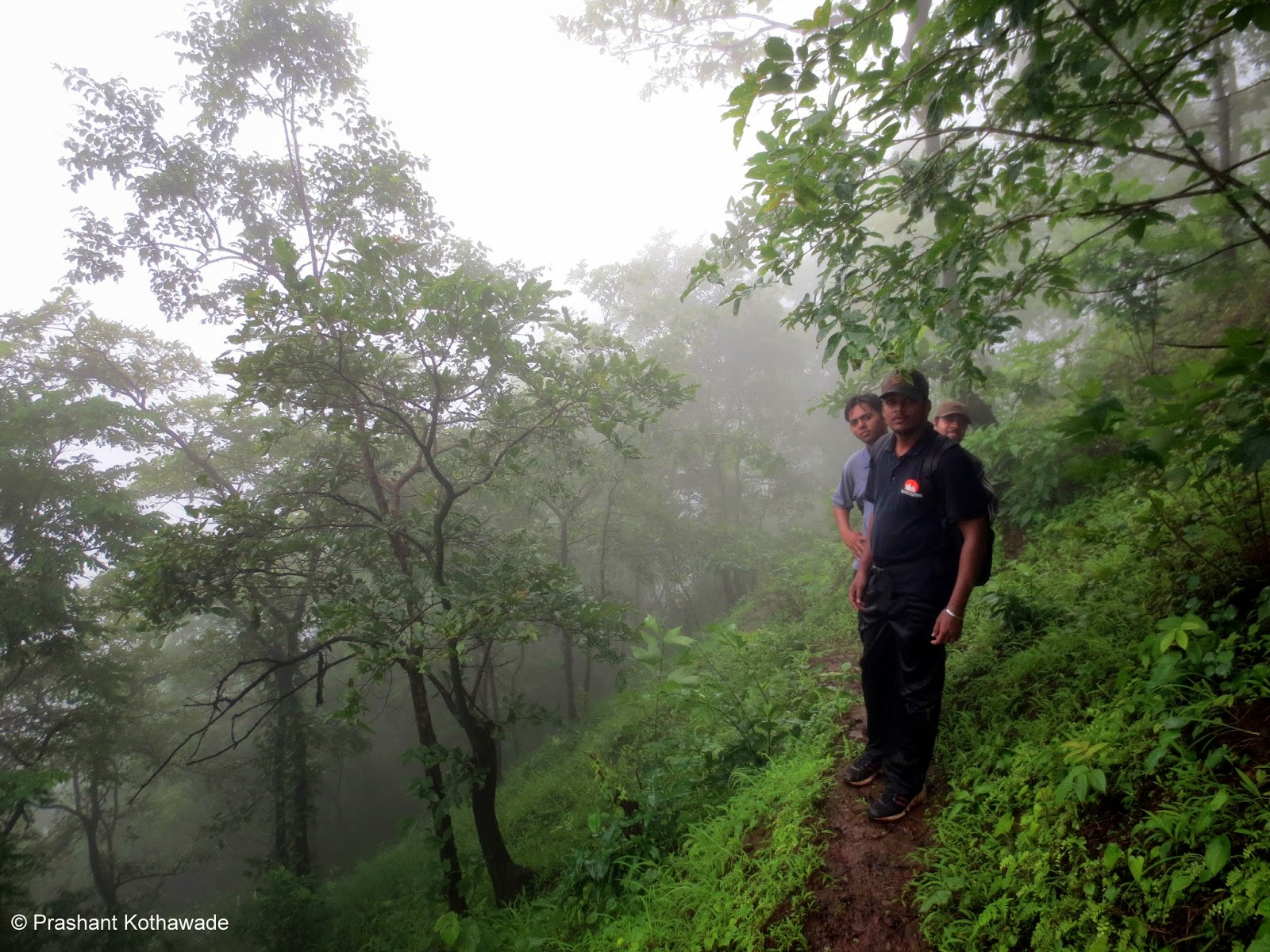 Soon, we reached to the plateau and lingered on it for quite a some time. Mangalgad was almost engulfed in the clouds and as soon as the cloud cover lifted, we had glimpses of the fort. 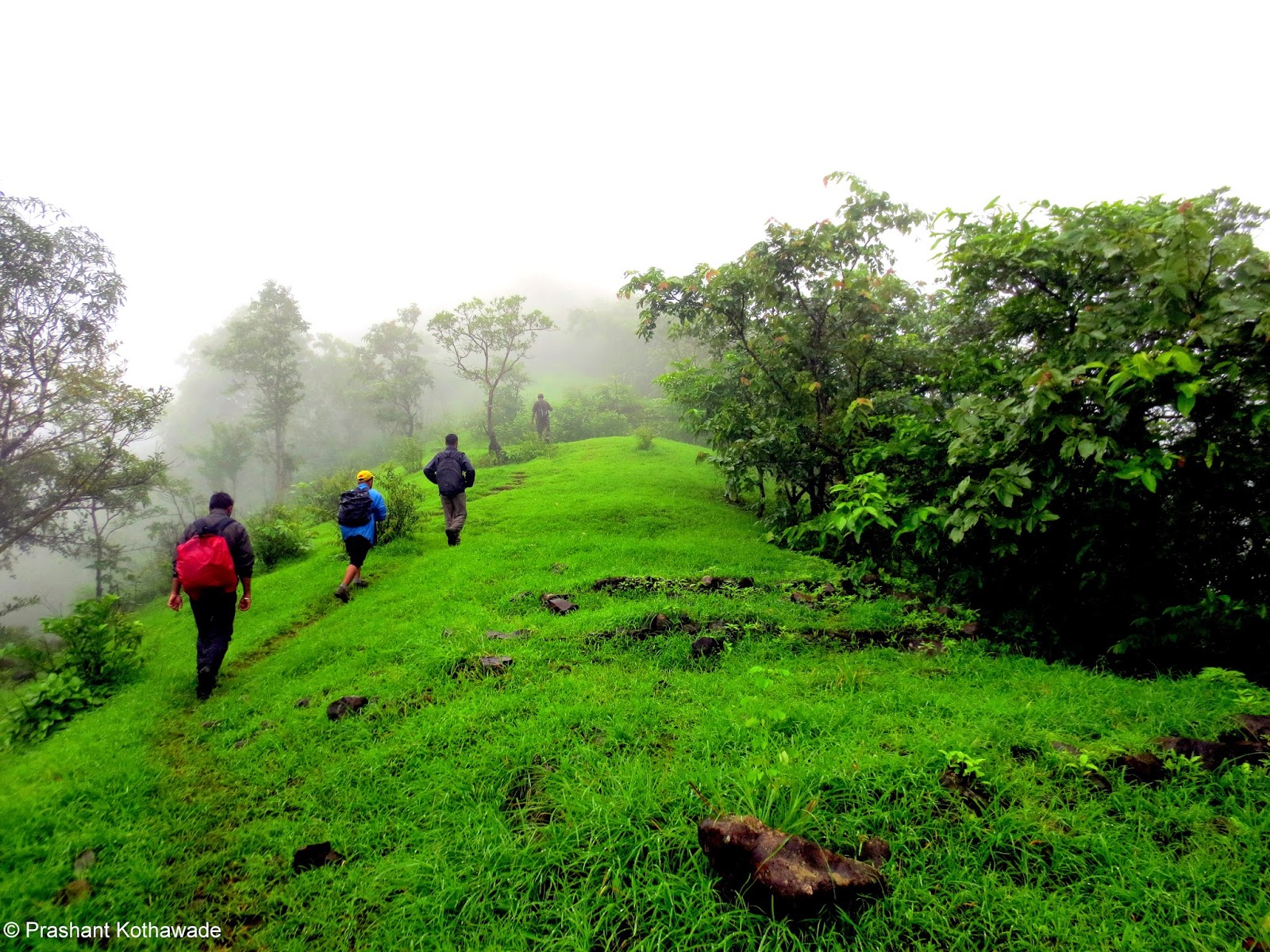 The fort is not visited much in the rainy season and that was clearly visible as route was covered with vegetation and we had to find our way through the vegetation. 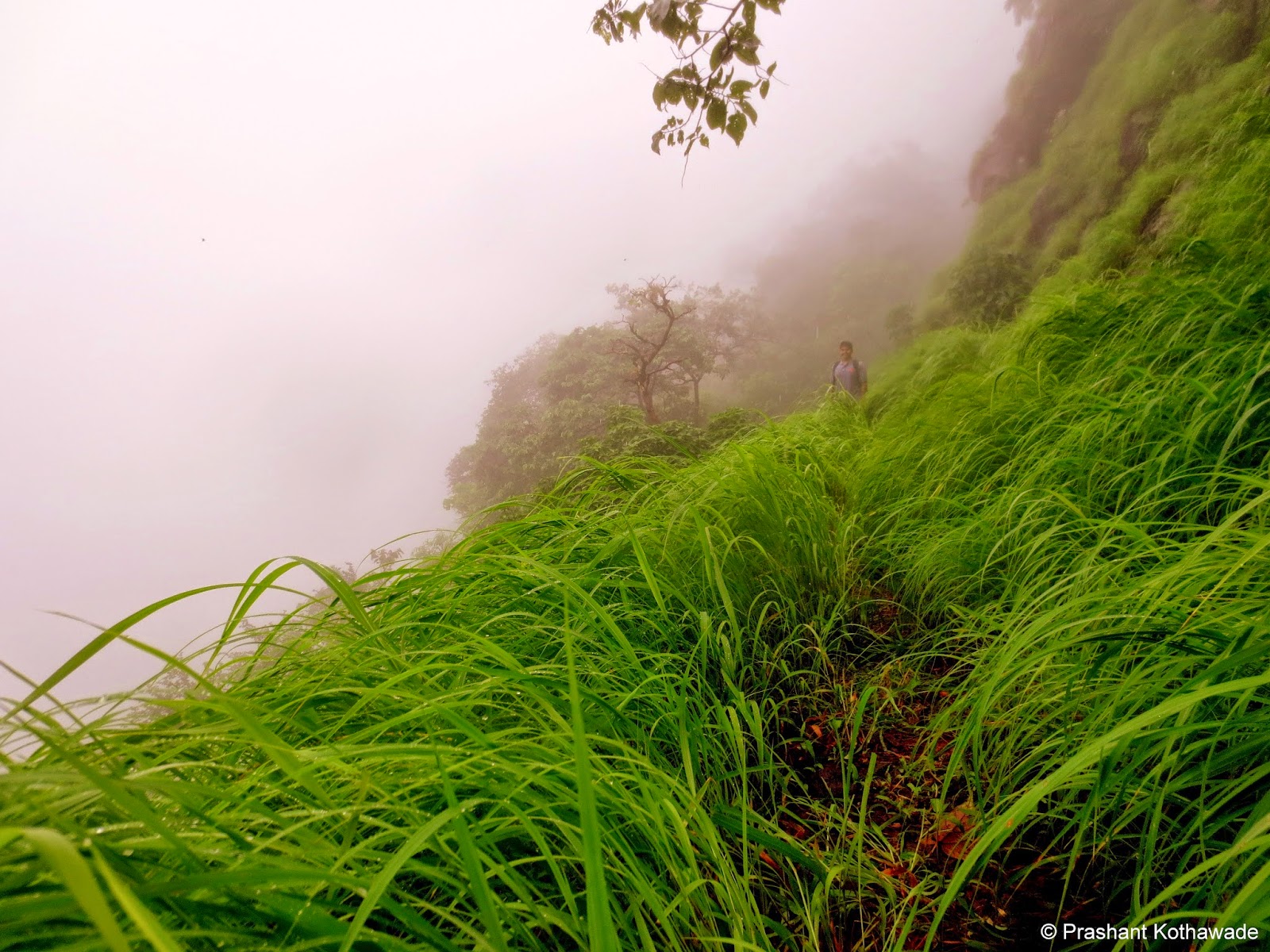 Rain was playing hide and seek and whenever it stopped, we took out our cameras to do some photography. 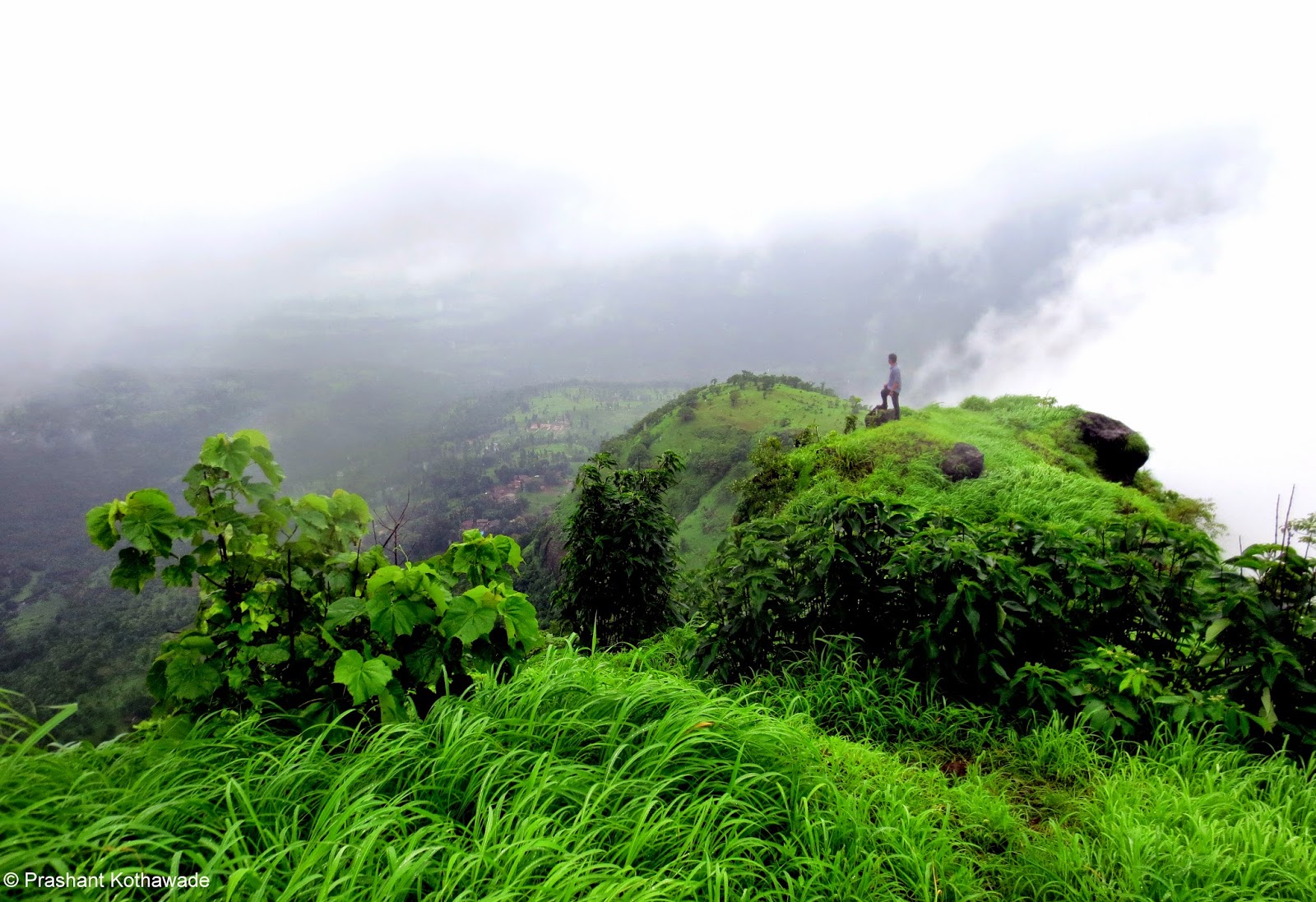 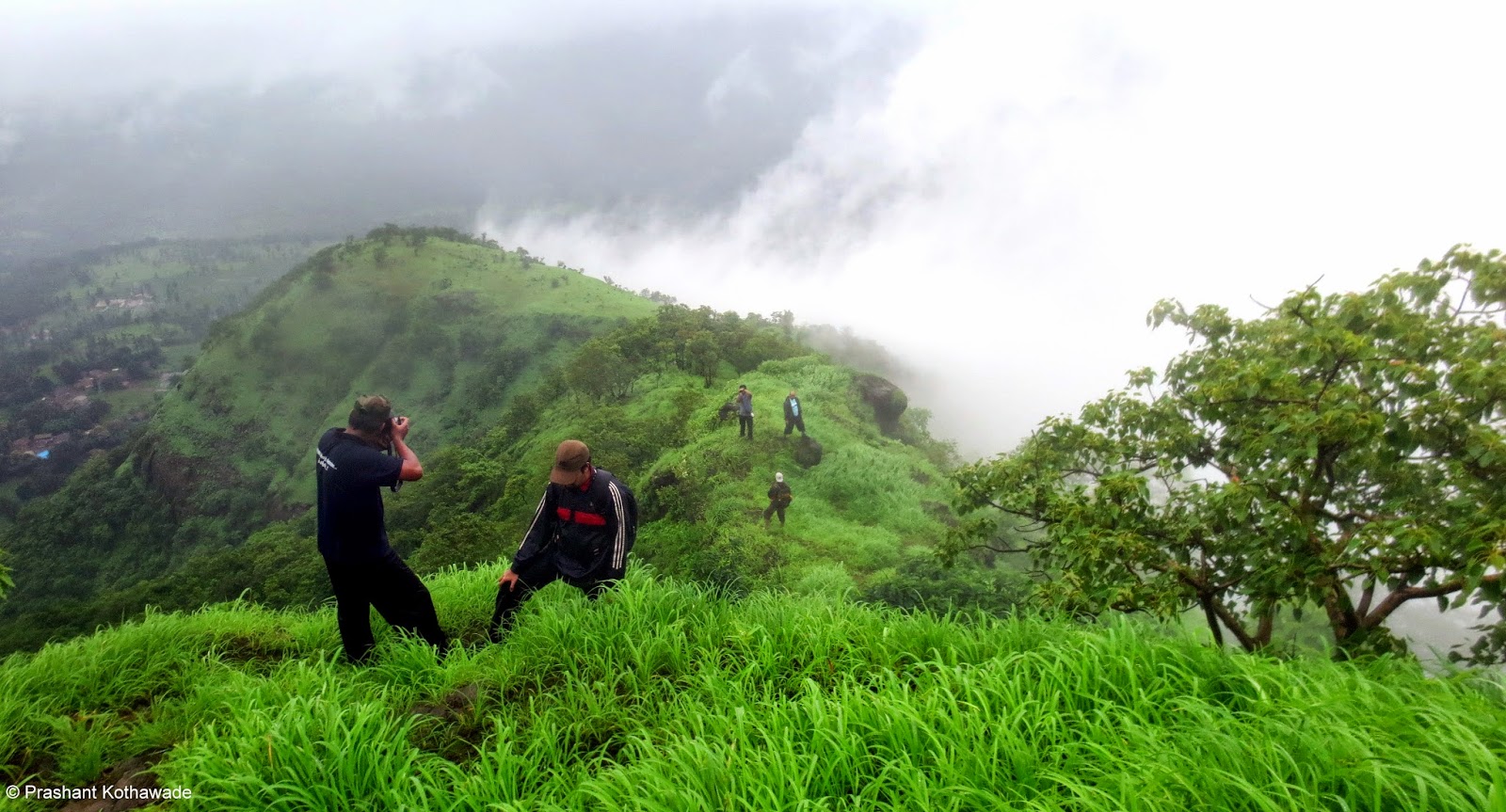 After hiking for more than an hour, we finally reached to the top. It was still foggy and everything around us was submerged by the thick fog and clouds. Soon, we reached to the temple and it started pouring. The temple is without any cover and there is not a single standing structure on the fort. Rain was relentless and cool breeze compounded the misery of those who had not worn the jackets.

We waited for rain to subside and chatted for a while. But rain was incessant and hardly gave any indication to stop. So, instead of waiting further, we decided to munch on the snacks we had brought along with us. After reading my blog on Kenjalgad, Onkar had specifically asked (almost forced by many messages on the whatsapp group) Sandeepak to bring Cheese Sandwiches. We somehow managed to unwrap the sandwiches in the rain taking the shelter of a small remaining beam of the temple and munched on it. Not to mention, those were again one of the most exotic Cheese Sandwiches we ever ate.

Temple of Kangori Devi (sadly without any cover and totally neglected): Different idols and Shiva-linga inside the temple: 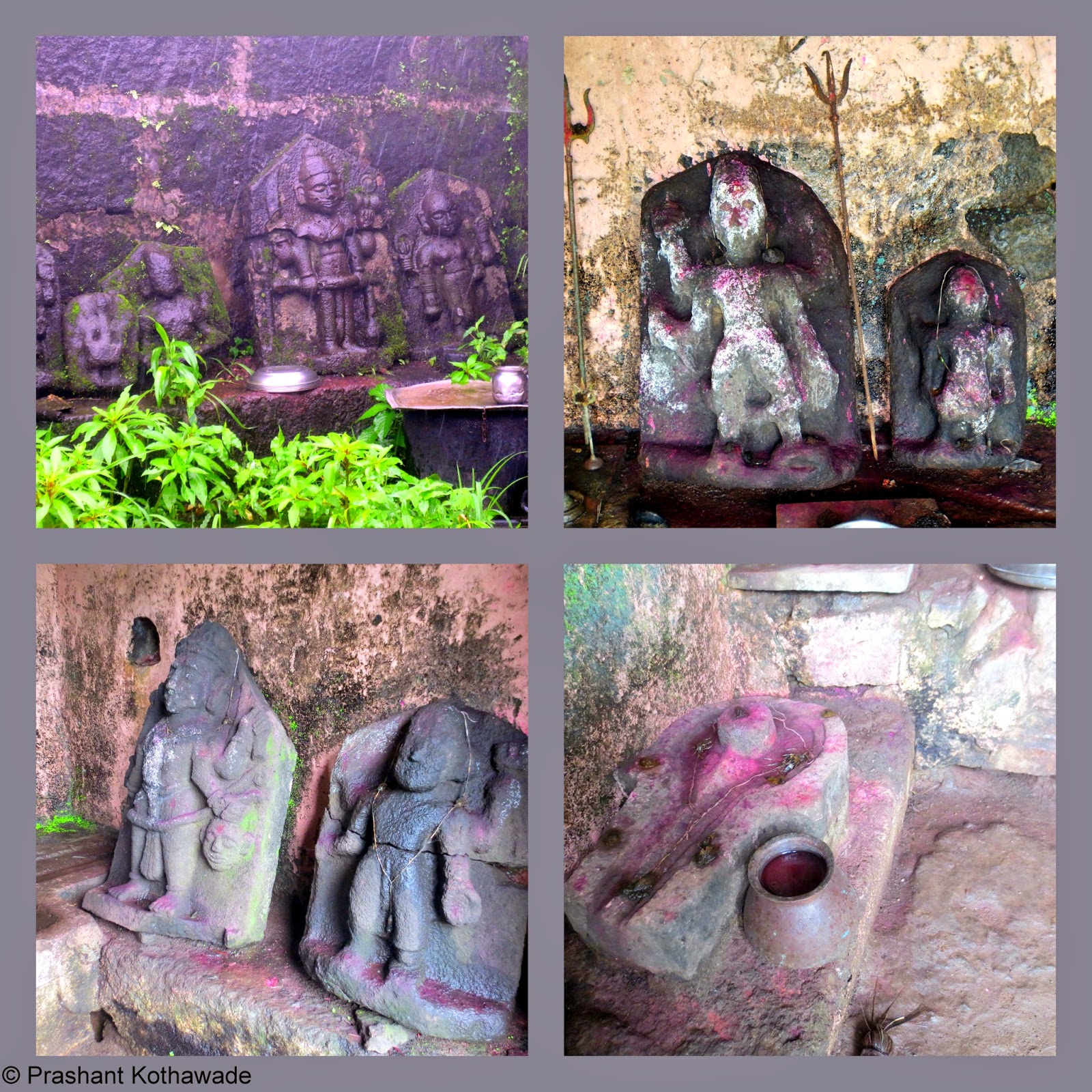 There was a ridge protruding further from the temple and we visited it, too. Unfortunately, cloud cover was not lifting and we only nodded and imagined the view as explained by Onkar. On a clear day, once can witness breathtaking views of Kamtha Khore, Chandragad, Mohangad, Ghats like Chikna, Chorkana, Varandha, Kavlya Fort, Raireshwar, Koleshwar and Mahabaleshwar.

Water Cistern on the fort: 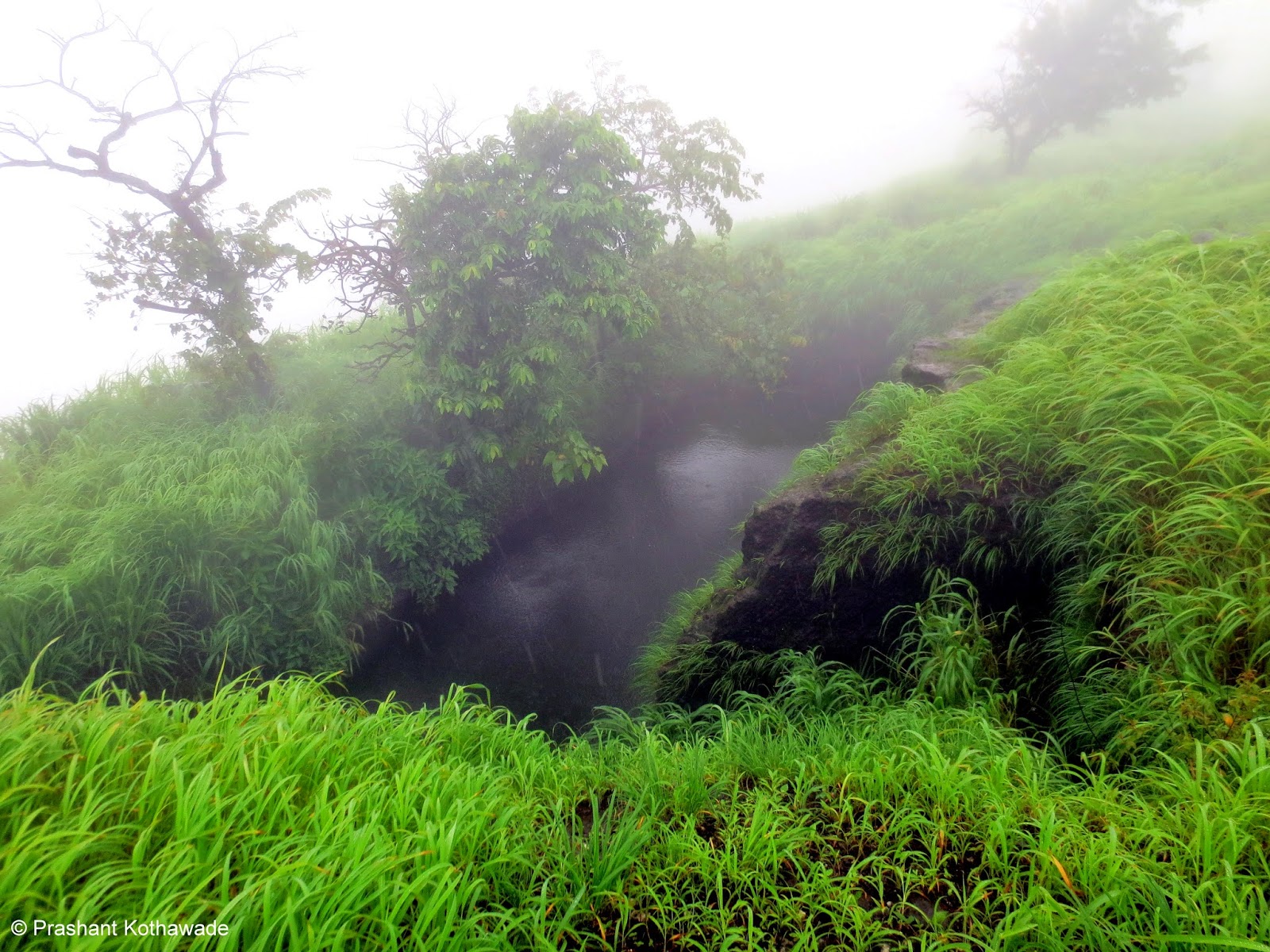 We spent around 45 minutes on the fort and decided to descend. Few of the trek mates started descending, few others went on the side hill to check out the water tanks. As there was hardly any visibility, I and Onkar decided to wait till their exploration was over. As we were waiting, members of a large group (almost 45 members) from Giridarshan Trekking Group started appearing one by one. Trek Leaders of that group were happy to see Onkar, who is really famous in the trekking circle. Onkar was polite enough to introduce me as one of the few English Bloggers who write about forts.

Soon, our other trek mates were back from visiting other part of the fort and we started descending. We again stopped at the plateau and spent around 15 minutes 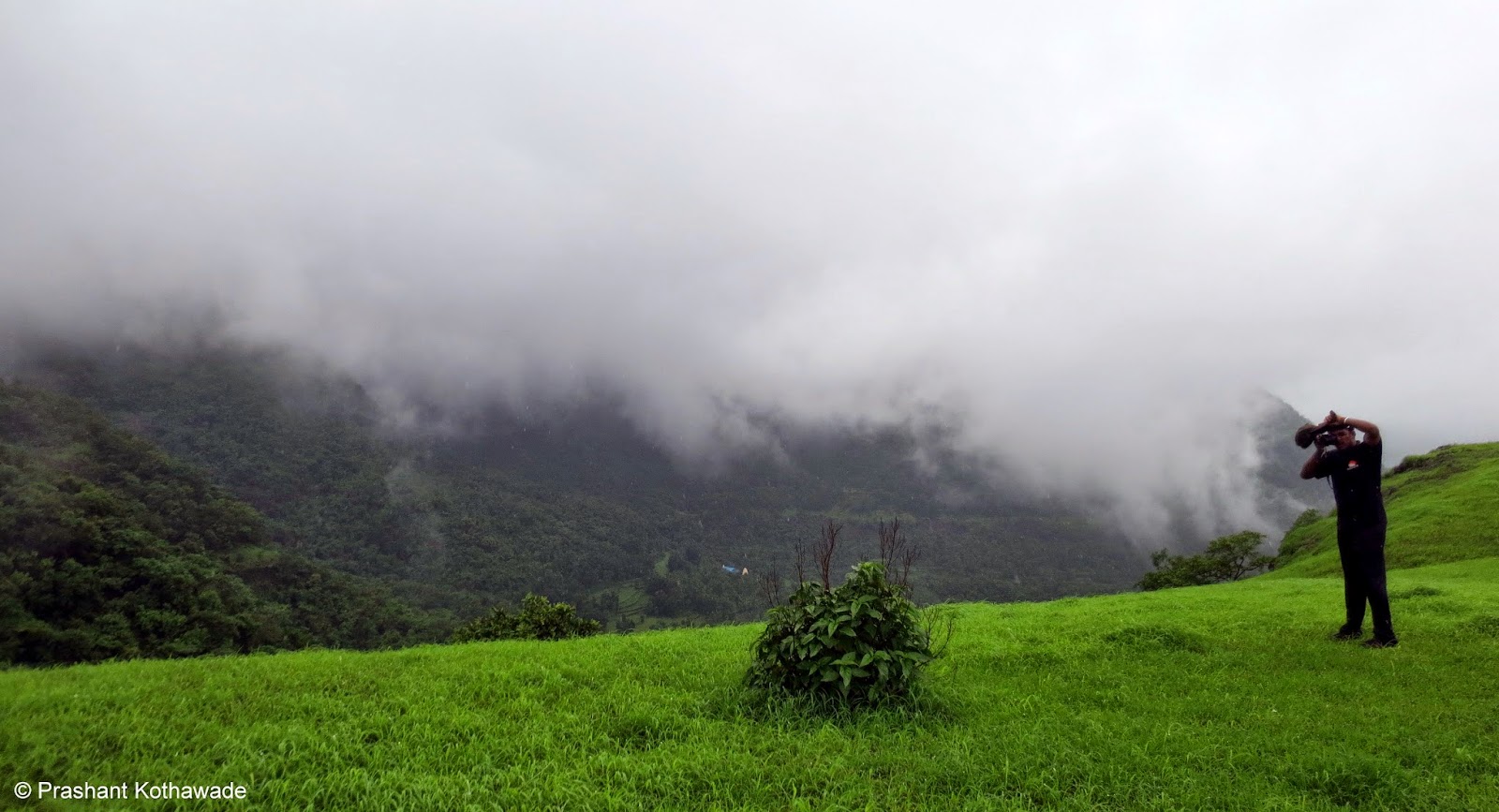 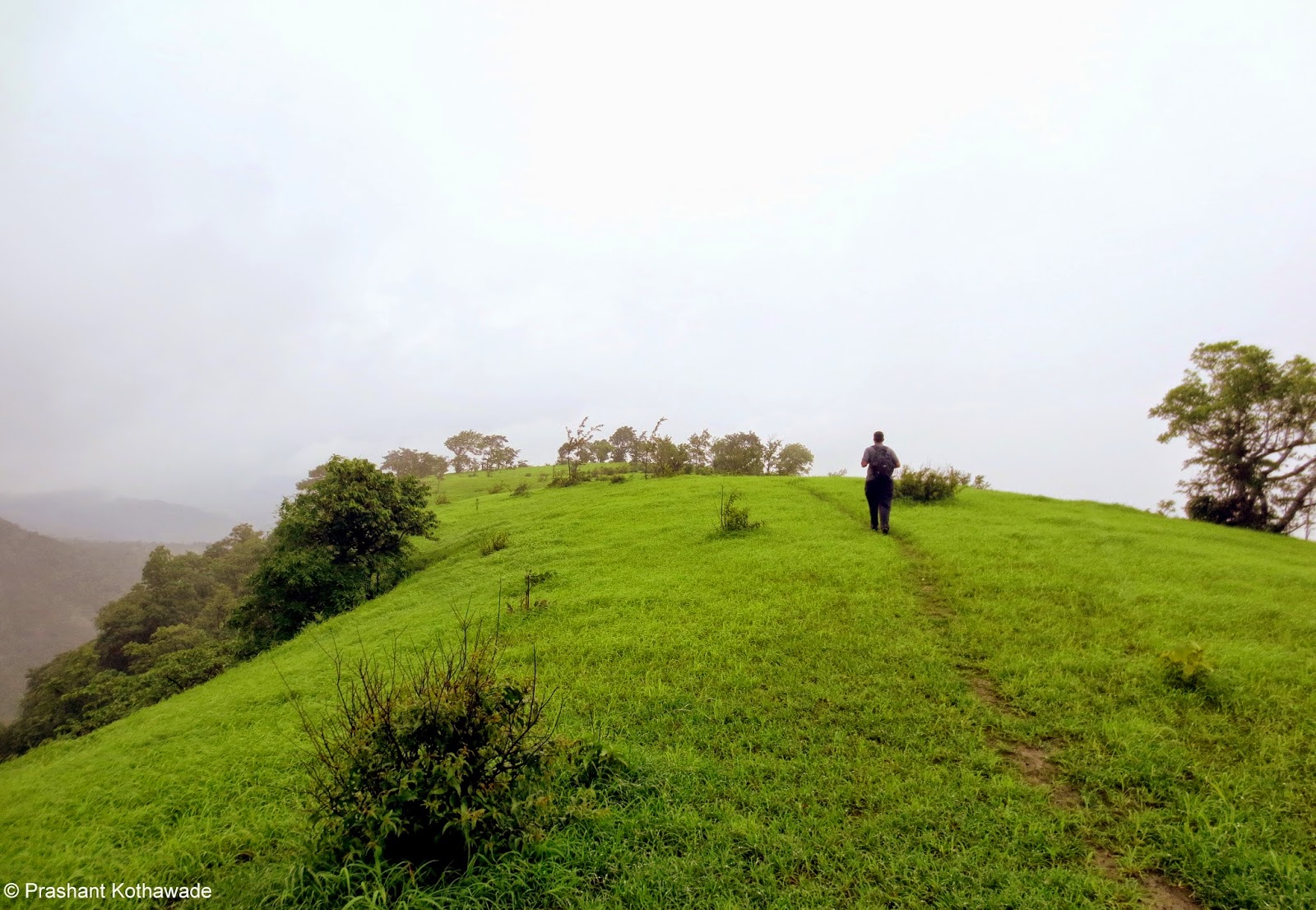 Some of us just didn't want to head towards the base and lingered for more than 30 minutes. As most of the trek mates already had gone to the base, we reluctantly trudged back to the base  but not before enjoying the views along the way which we had missed earlier due to heavy fog and rain. 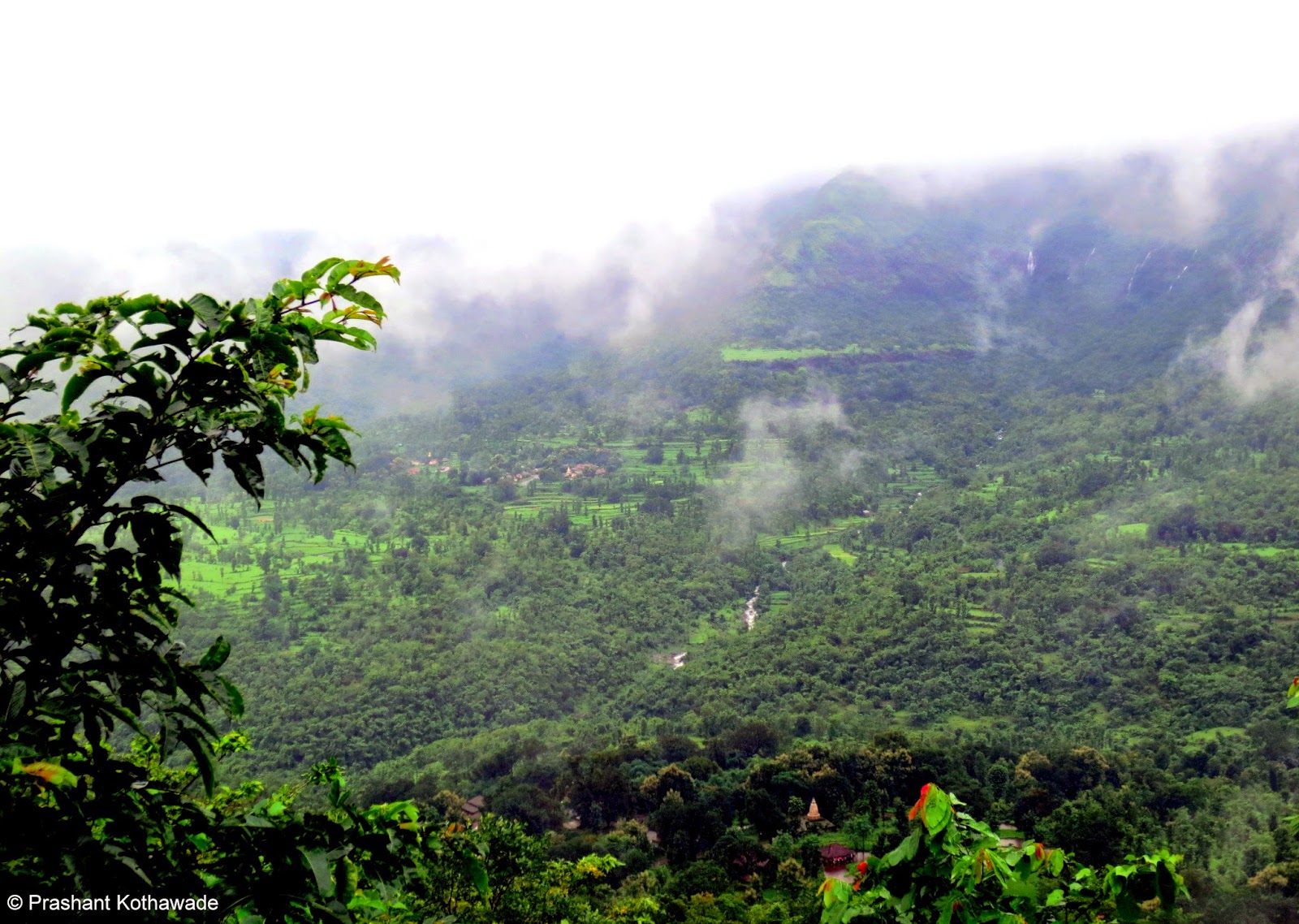 Most of us were quite drenched and changed our clothes and had a lunch inside the temple of Bhairavnath and started our return journey back to Pune. We had a Bhajji, Tea break in the Varandha Ghat amid the heavy rain before reaching safely to Pune around 8.30pm. 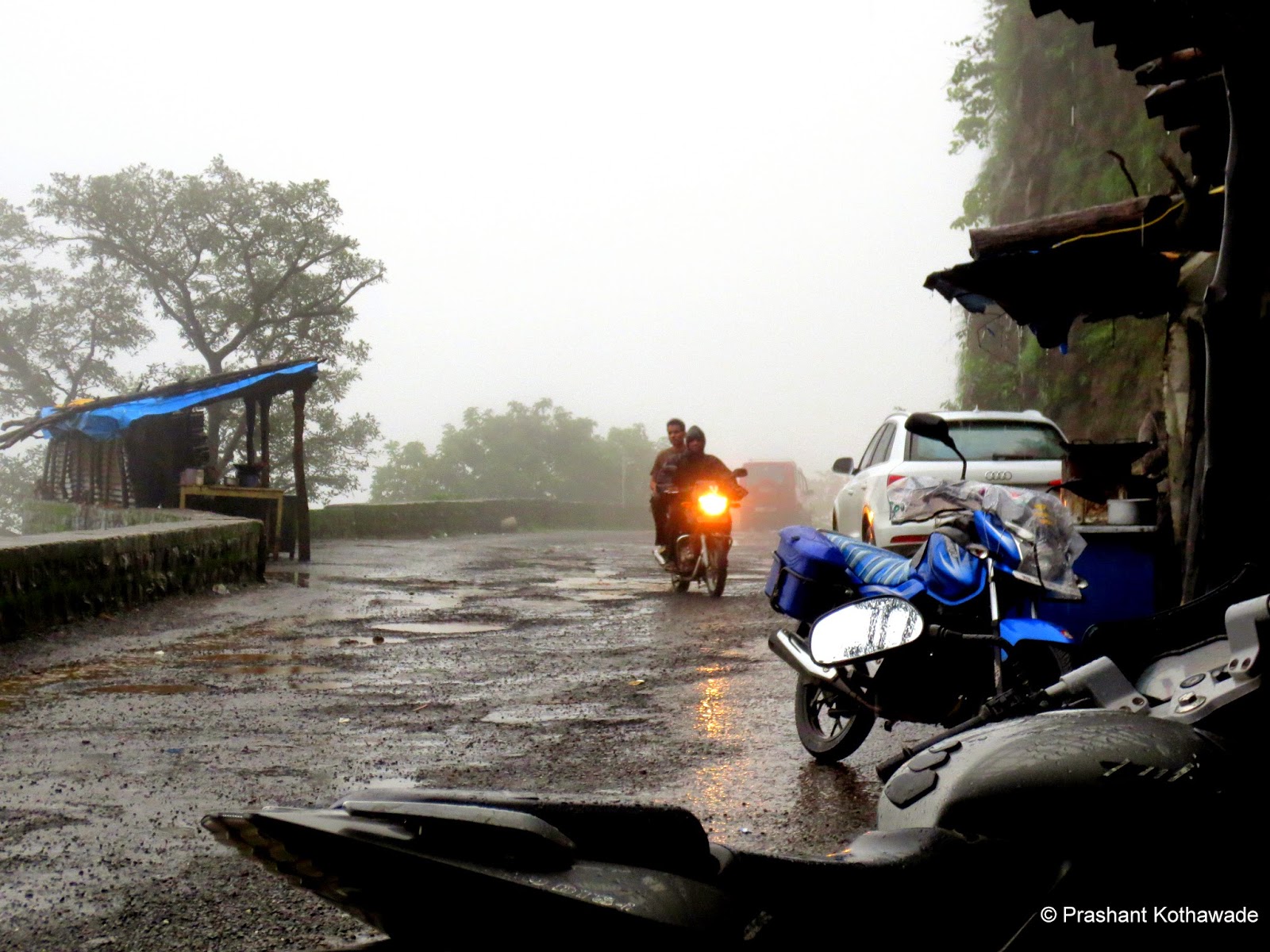 Really a magical experience! Travelling amidst the verdant landscapes, walking in the clouds and mist with incessant rain as a company, munching snacks on top of the fort right in the open with rain pounding and enjoying camaraderie of great trek mates led by affable Onkar really made the whole hiking experience unforgettable.No doubt, there was a tinge of disappointment of not being able to view the mighty views of Sahyadri mountains from the top, but there is always a next time and I would definitely revisit it either in winter or summer.


Tips for the hikers:
Thank you for reading the blog!