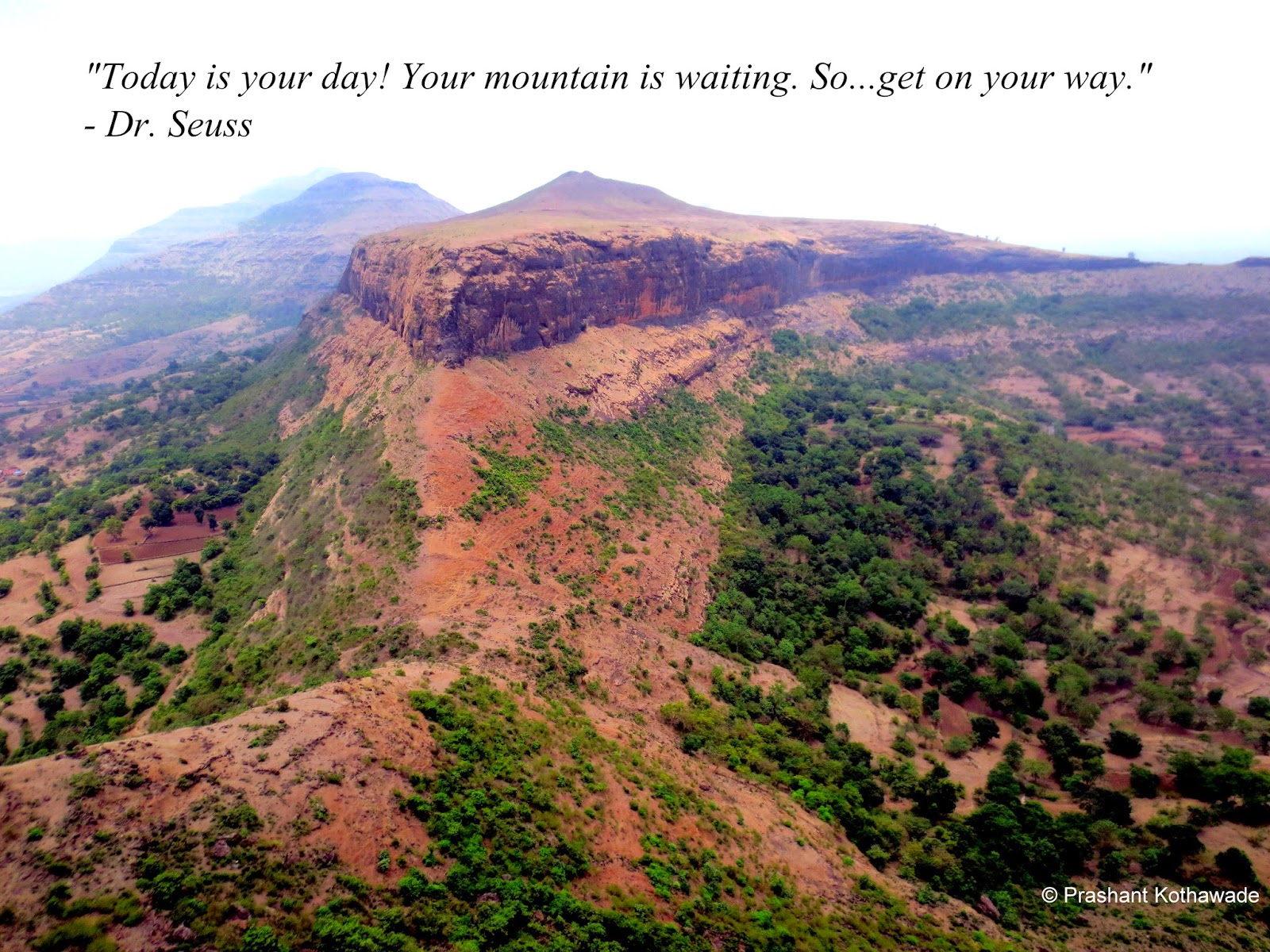 Junnar region - a region bestowed with abundance of beauty and a rich history; a region tucked away at the foothills of great Sahyadri Mountain Range; a paradise for trekkers with stunning forts like Shivneri, Chavand, Hadsar, Jivdhan, Naneghat. No doubt, it has become one of my favorite places to hike.

It was a while since I last visited this area. Last time, it was Fort Chavand which had mesmerised me with its beauty. This time, it was turn of Fort Hadsar, situated around 12 km from Junnar city.

After finalizing the hiking plan for Hadsar, I invited few of my trek mates and we formed a group of 5 - "Sameer Kadam", "Vishal Suryavanshi", "Swapnil Kamthe" and my elder brother- "Tushar Kothawade" who wanted to have some hiking practice before his Leh-Ladakh photography tour. Plan was to start from Sus Road in my car and pick up Swapnil at Wakad at 6 AM and Sammer, Vishal at Kalewadi Phata at 6.15 AM.

Everything was set perfectly and we (Tushar and me) started exactly on time from Sus Road and reached Wakad at 6 AM. I was imagining Swapnil waiting for us at Wakad but alas! There was no sign of Swapnil. His calls did not go through as his mobile was switched off. Could we have asked for the worst possible start for the trek? A trek mate less even before starting the trek. After waiting for 15 minutes, we decided to leave Swapnil - sleeping and dreaming in the comforts of his home and went ahead to pick up Sameer and Vishal who were waiting for us at Kalewadi Phata.

We stopped at Sanskruti Restaurant, a nice and clean restaurant on Pune-Nasik road just before Manchar. After breakfasting heavily, we proceeded to Junnar via Narayangaon. On reaching Junnar, after few inquiries for the route to Hadsar, we were on our way. My earlier experience of driving to Chavand Fort in same area was terrible. But I was lucky this time and road condition to reach Hadsar was more than satisfactory.

First glimpse of the fort: 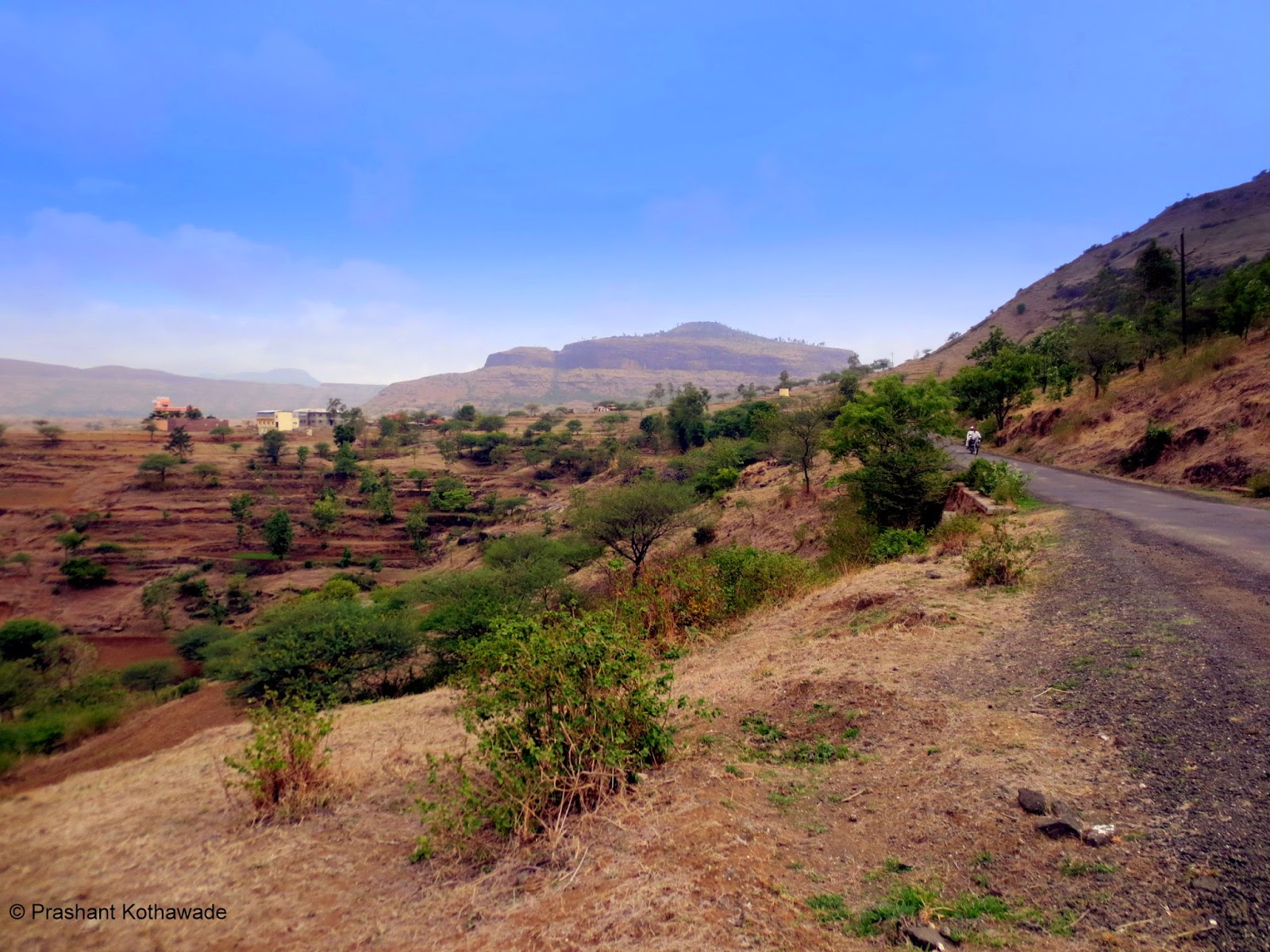 Just before entering the base village, we spotted a beautiful deer sprinting across the road just in front of our car; it ran for some distance, paused and turned around to look at us. We stopped our car and just when we were gearing up to capture the moment in our cameras, a sudden screeching horn of a Fortuner coming from behind disturbed the whole sanctity of the moment and in a flash, deer vanished in the woods. Cursing the driver of the Fortuner silently, we proceeded towards the base village.

After parking our car, we confirmed the direction of the route from few villagers and started our ascent. 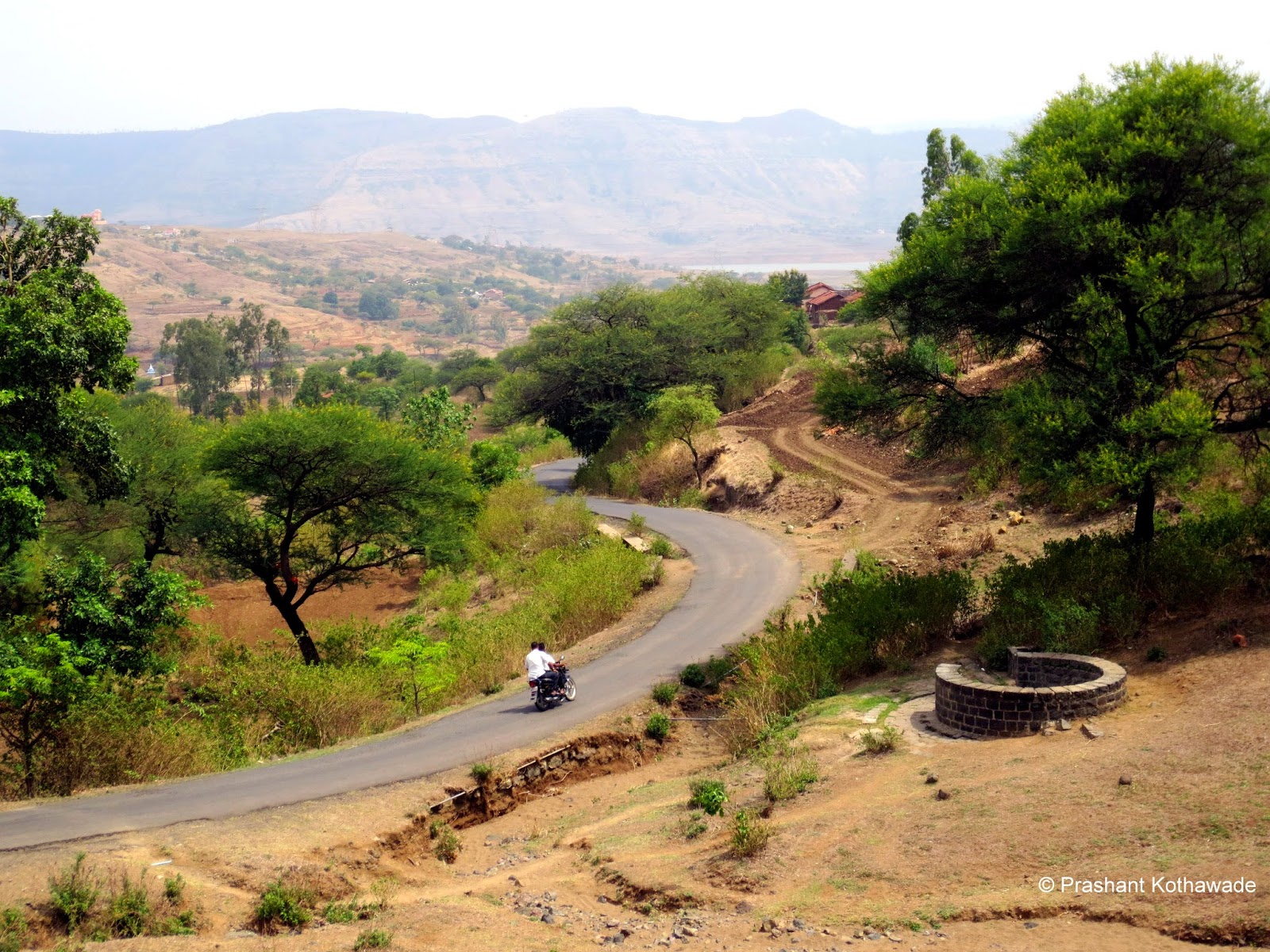 It was hardly a climb of 10 minutes, before we reached to a vast plateau from where Hadsar Fort with its massive, vertical scarp was looking breathtaking. I had imagined it to be a very small fort but looking at the massiveness of it, I was dumbstruck. 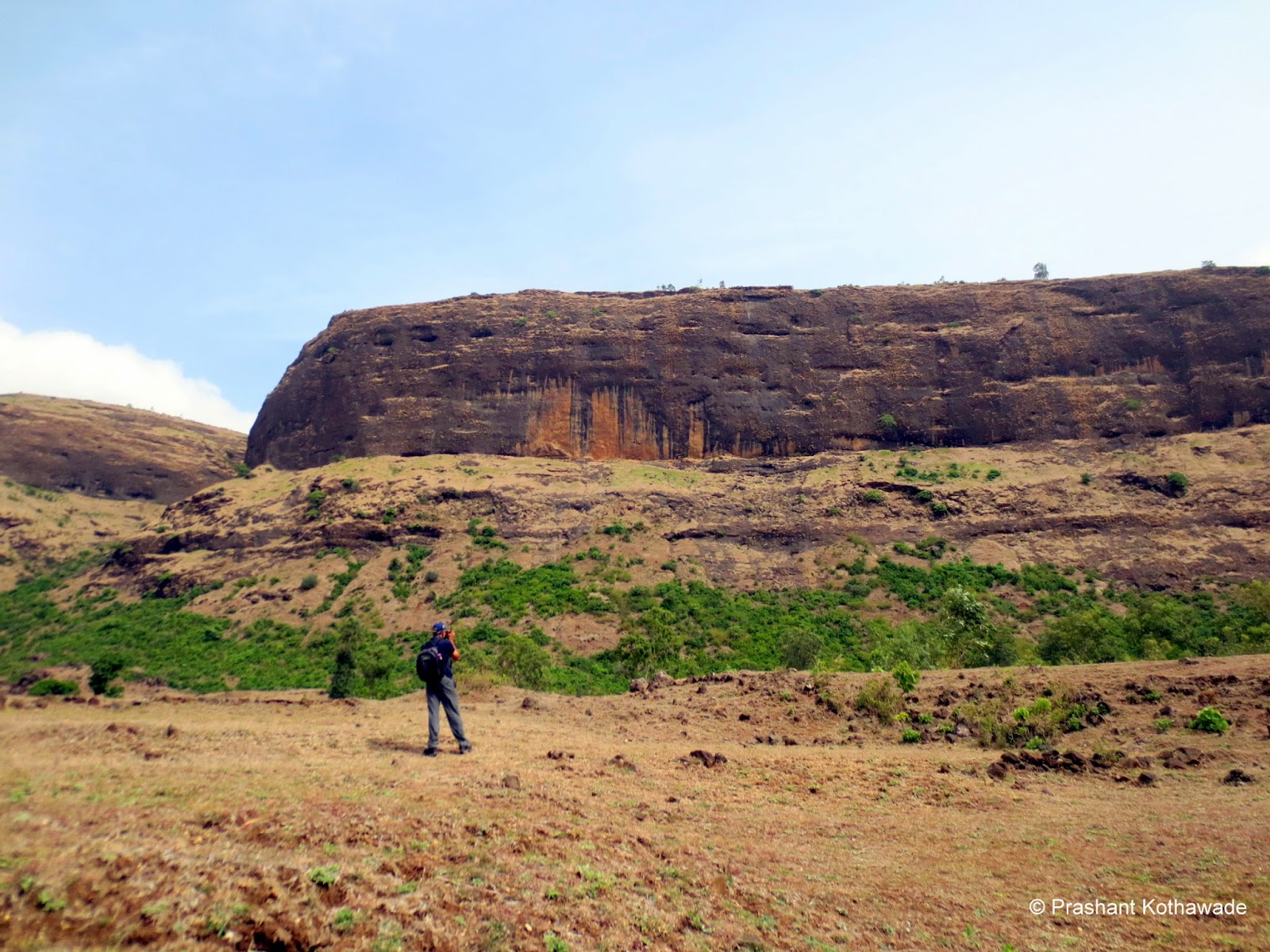 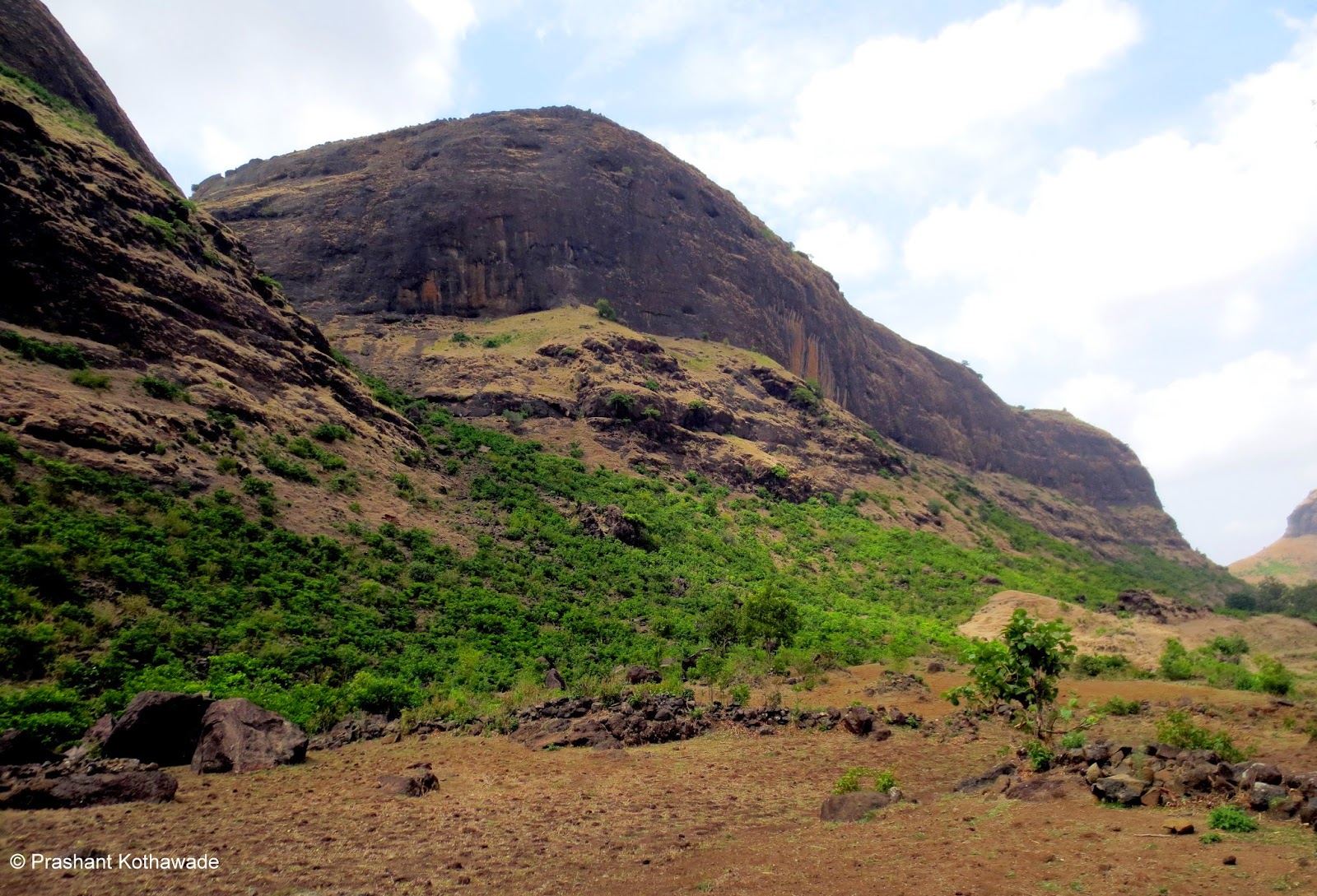 After doing some photography, we decided to climb further. We were not sure of the exact route though we were aware of the tentative route. Fortunately we spotted a shepherd walking merrily with his flock of sheep; Gunaji was his name and he happily agreed to guide us as he was taking his herd of sheep for grazing on top of the fort. 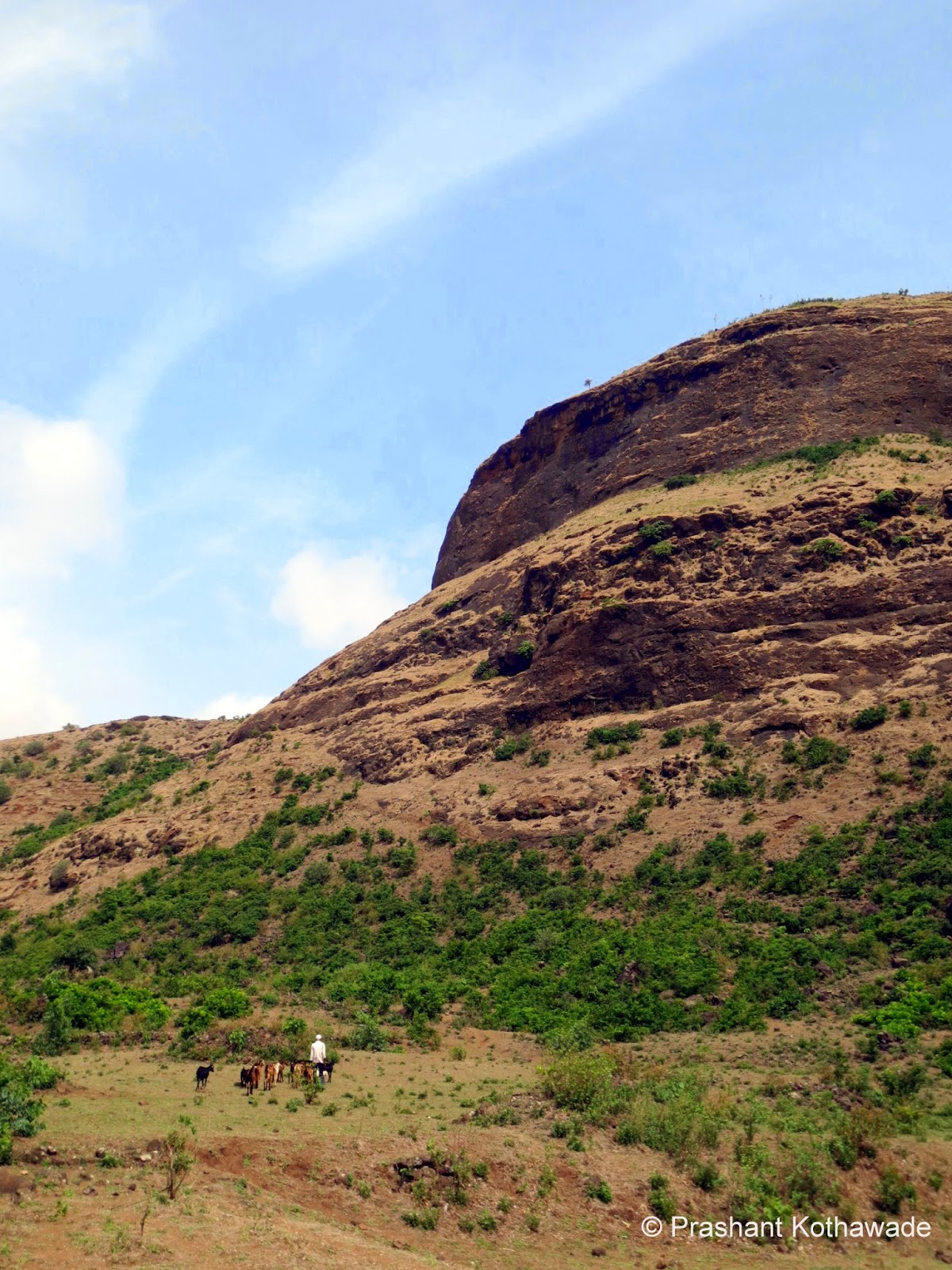 Ascending route went through hundreds of shrubs of curry-leaf plants. On discussing with Gunaji, we came to know that selling these curry-leaves in the market is prohibited by the forest department. After a climb of about 20-30 minutes, we reached to another plateau, a very small one from where we needed to take a traverse to reach to the steps leading to the fort. On reaching this plateau, a vast expanse of the West was looking quite exciting.

Western side of the fort: 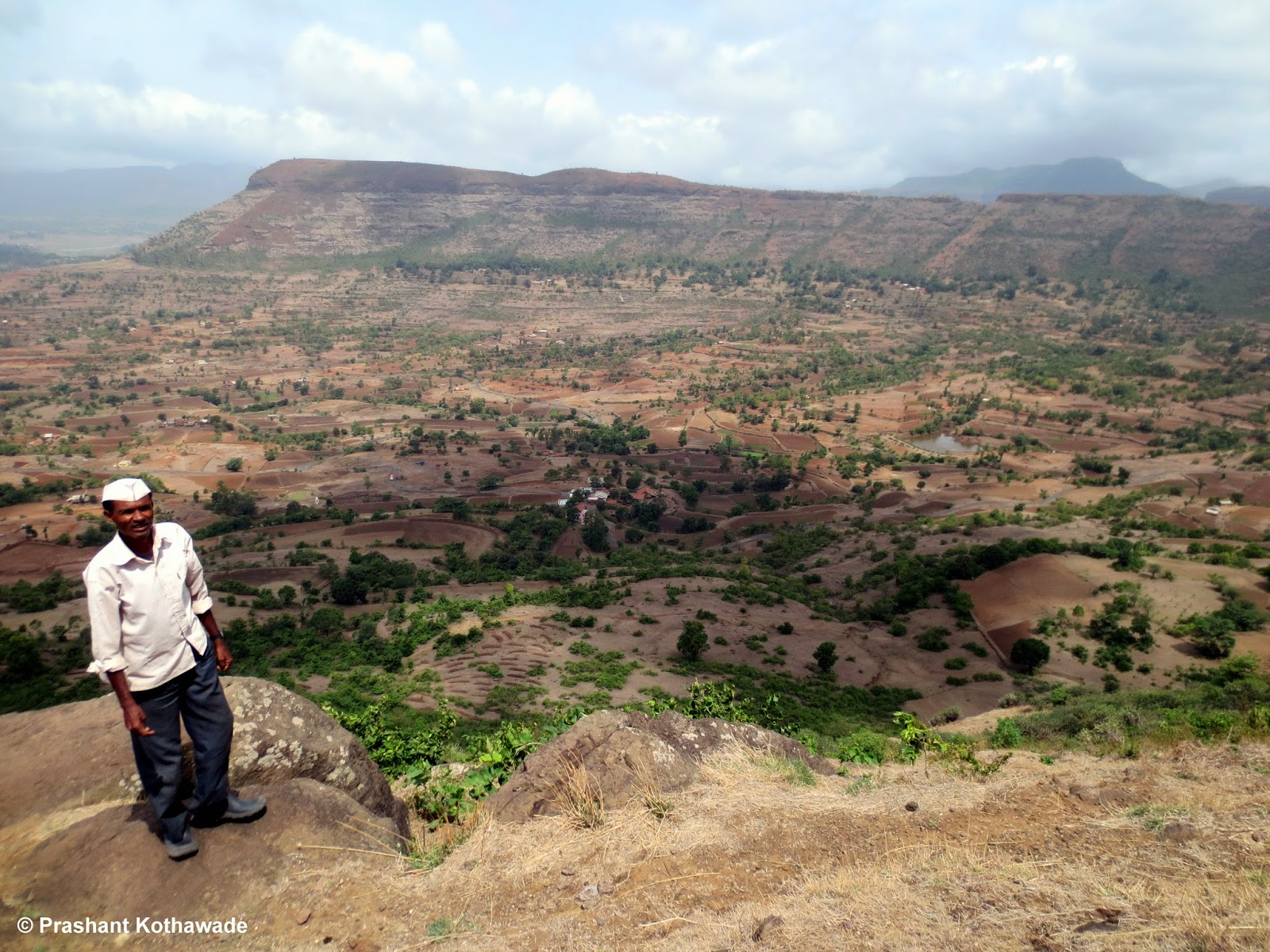 Some politician was giving a speech to the villagers boasting of his development work in their remote village (probably some election was around the corner) and it was reaching to our ears while we were taking a traverse.

Traverse to reach to the steps: 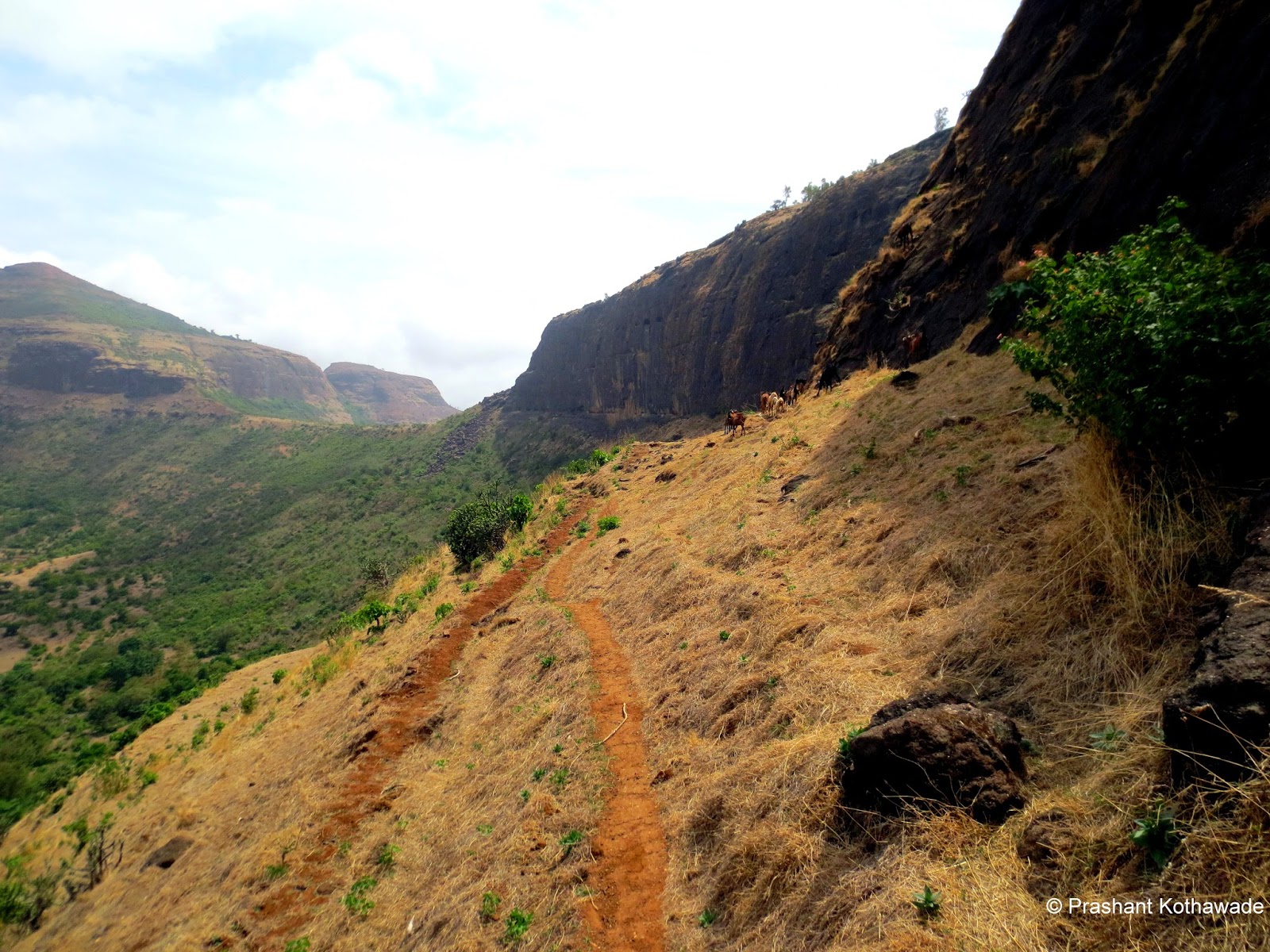 While taking a traverse, you come across a small water tank carved inside the wall of the fort. Water in the tank is potable and as it is covered from the top, it doesn't get dried out even in the summer. 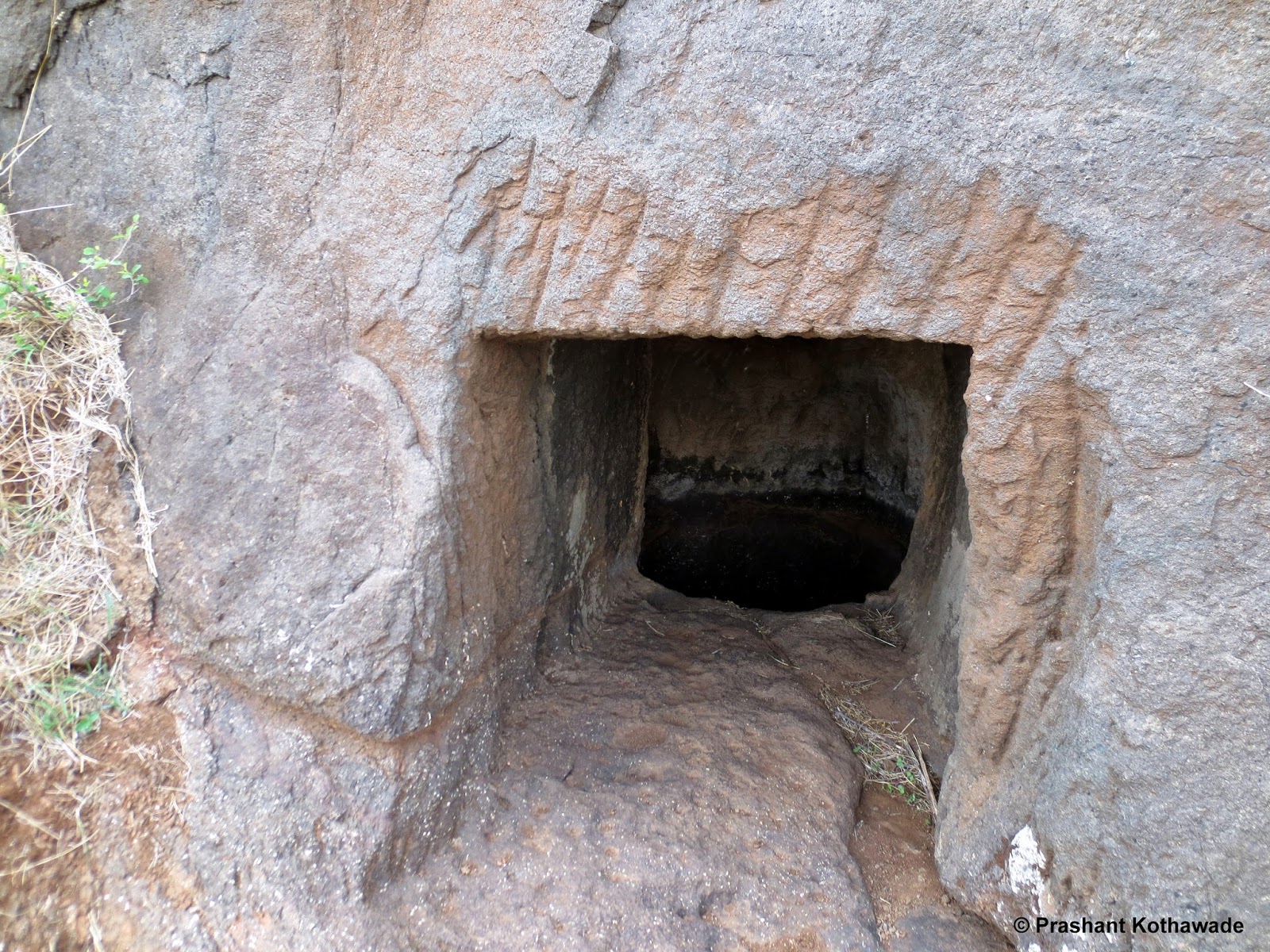 After walking for few minutes on the traverse, finally the steps became visible. 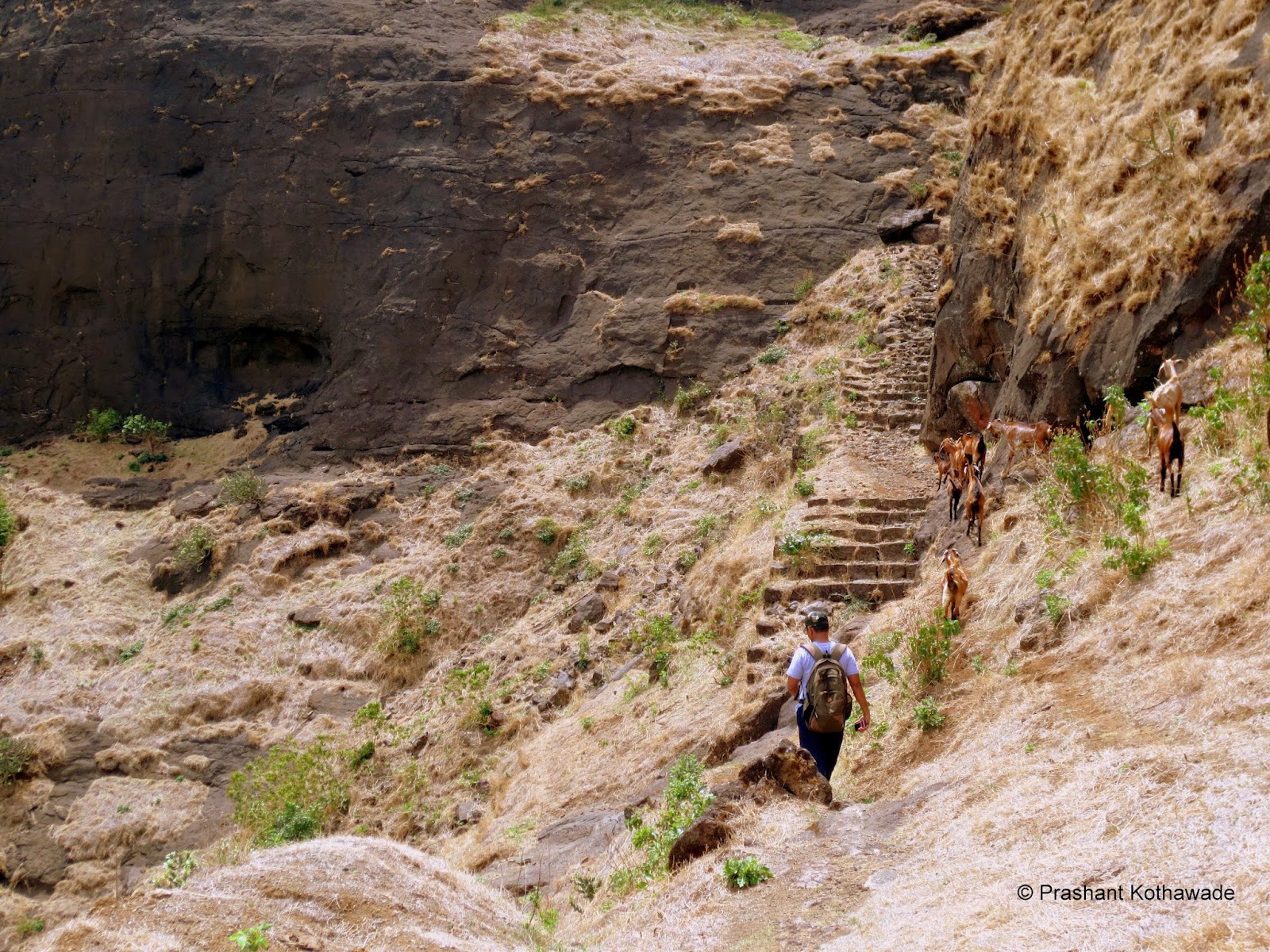 Steps leading to top of fort: 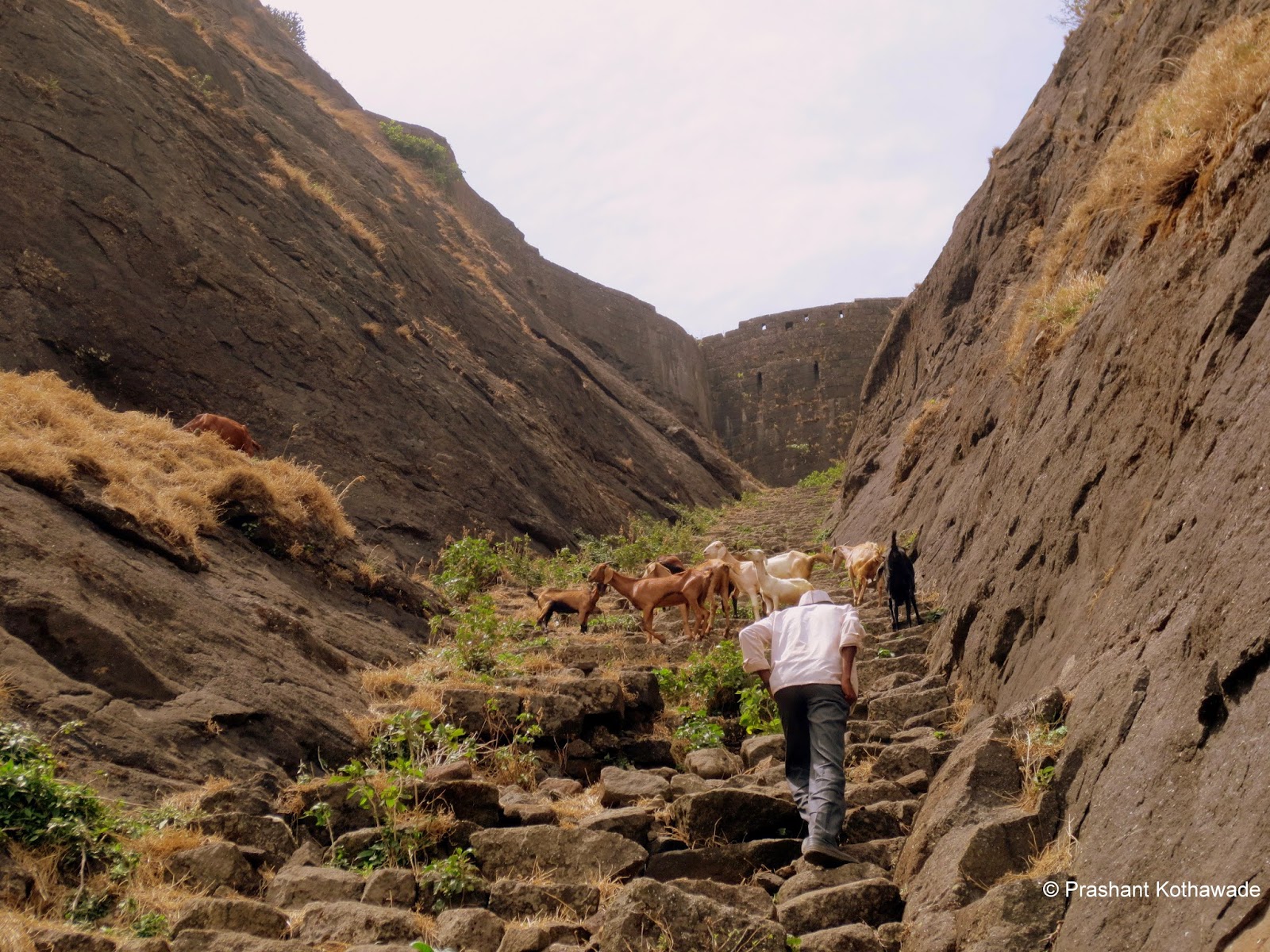 As we were ascending the steps, I asked Gunaji if he had any experience of witnessing the leopards since Junnar region has largest density of leopard population within a 500 km² area. I was astonished when he told me that leopards already had killed more than 20 of his sheep in the past. He also narrated few fascinating stories about various encounters of villagers with the leopards.

After crossing the steps, you need to take a left turn and you come across two entrances carved in the stones. 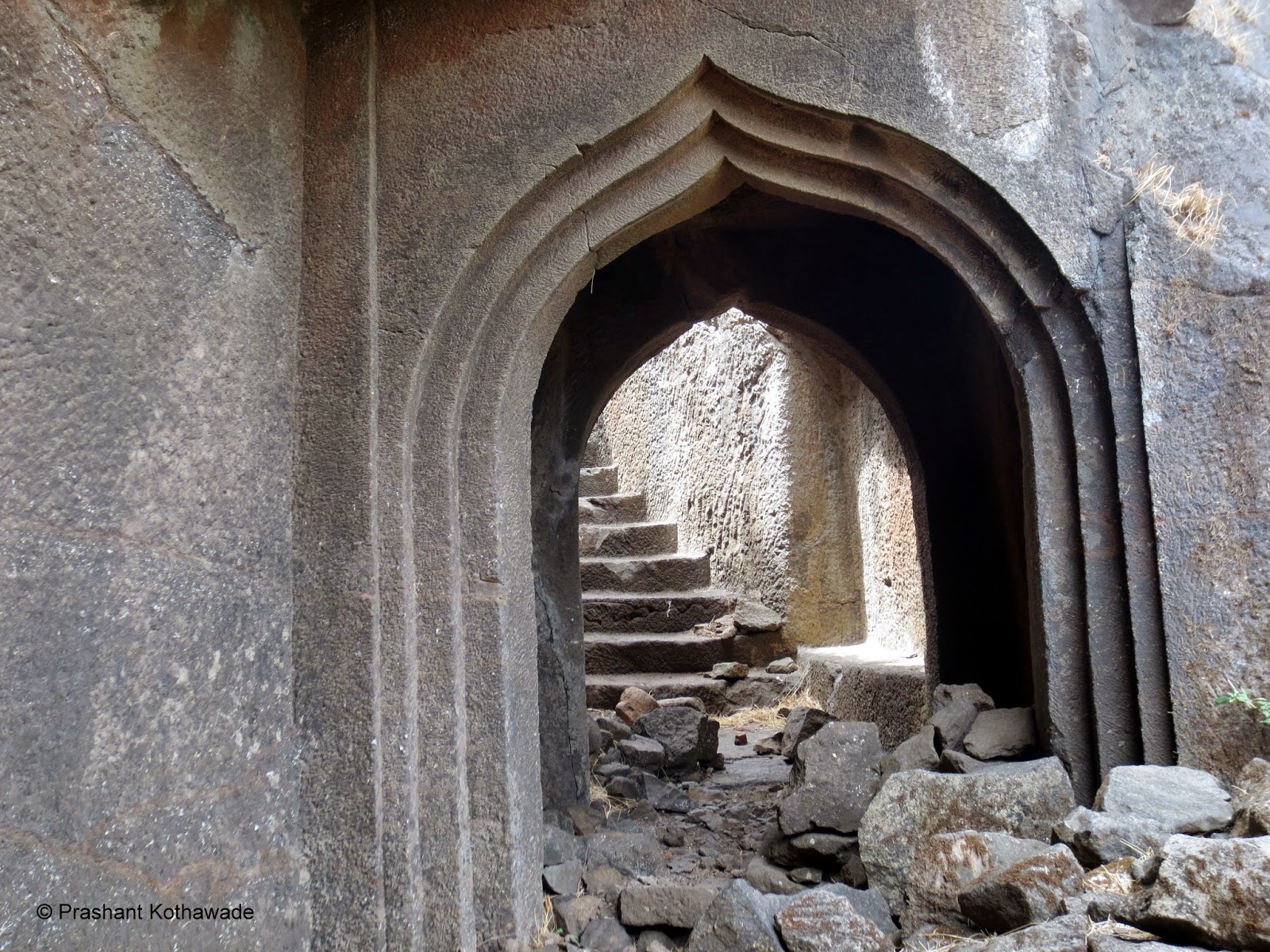 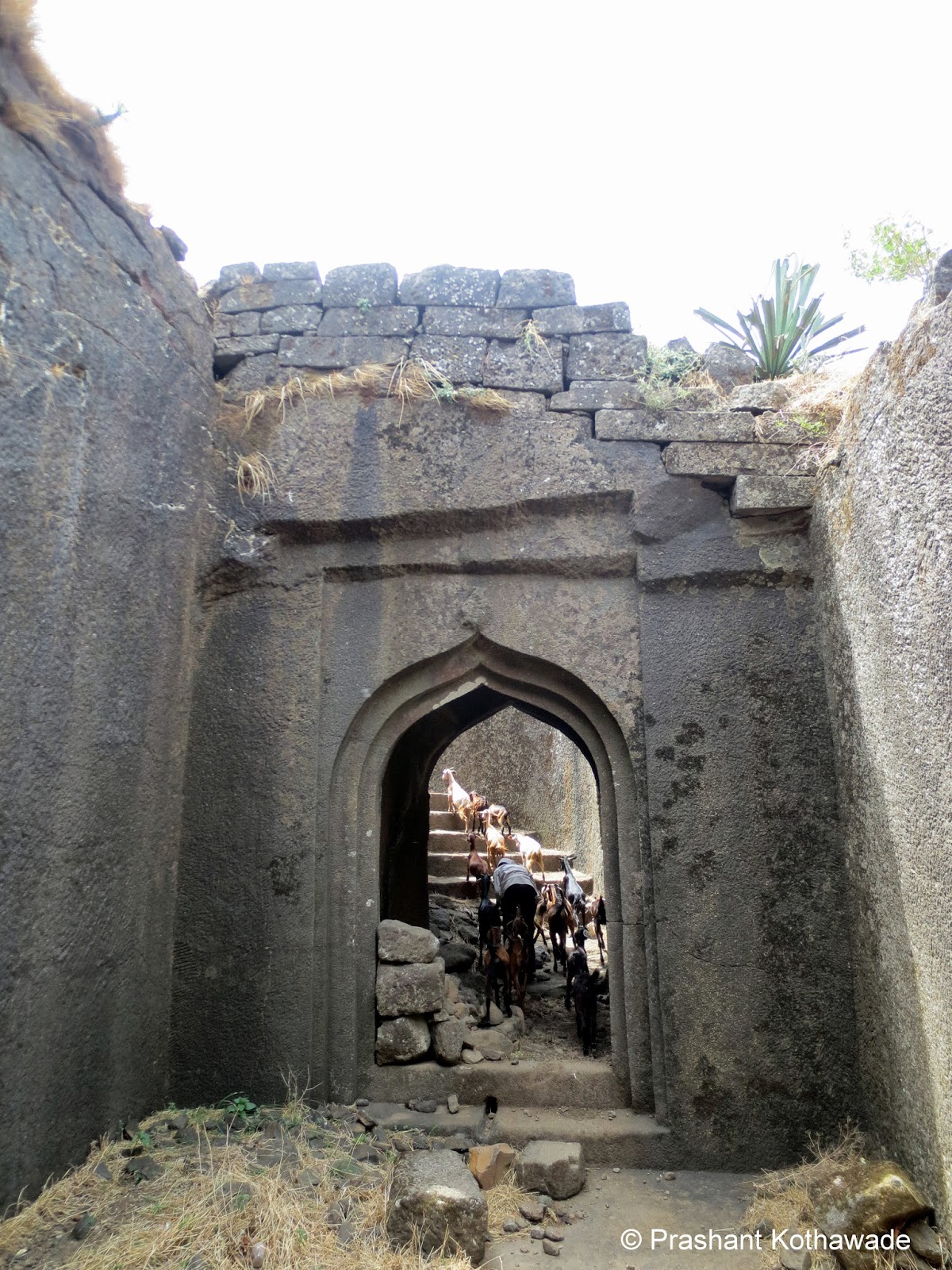 After crossing the entrances, you reach to the plateau. We were greeted by a wonderful sky with dispersed white clouds. 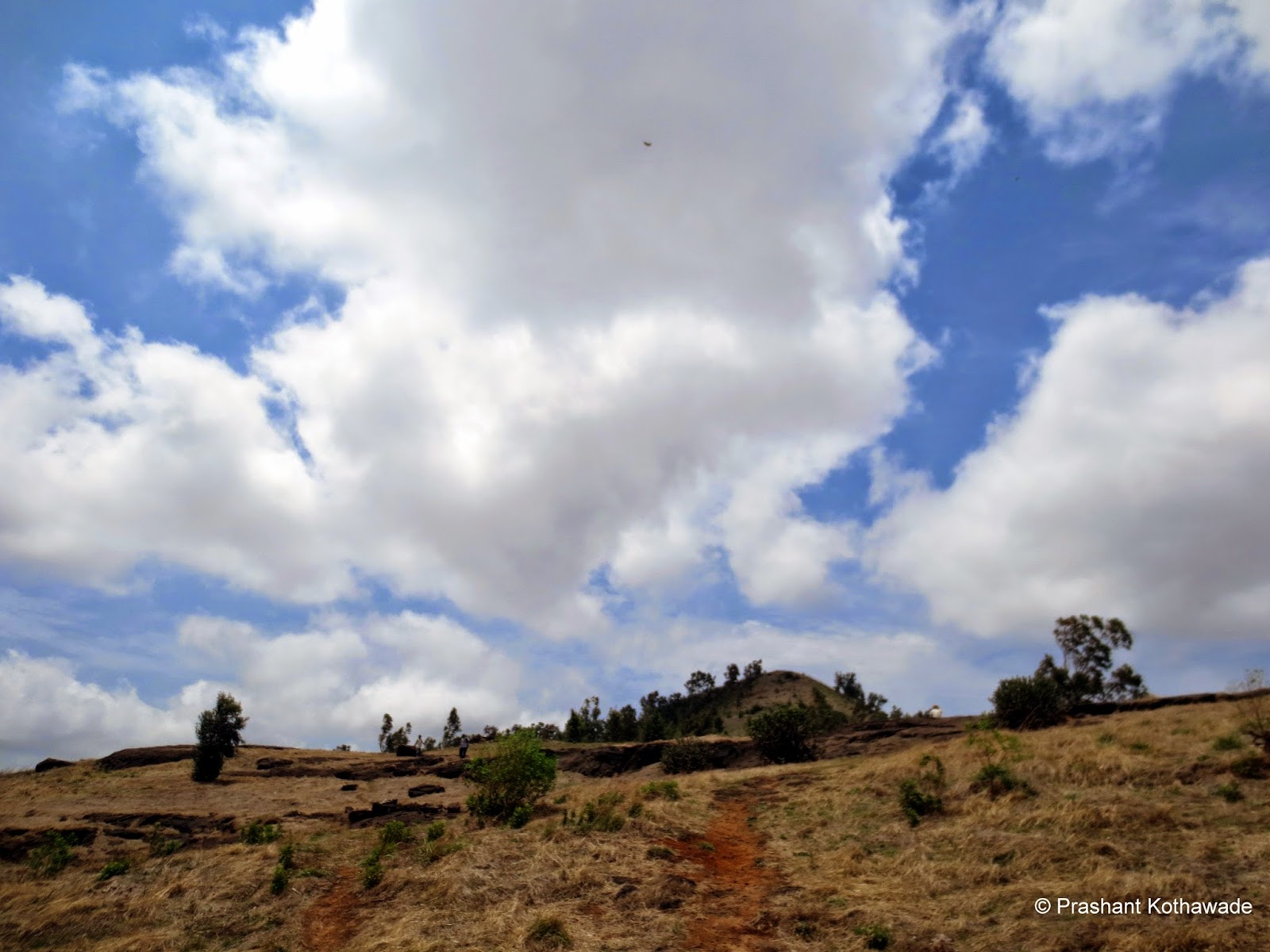 This plateau is big and comprises of Mahadev Temple, a citadel and many water tanks.

Big water tank on the fort: 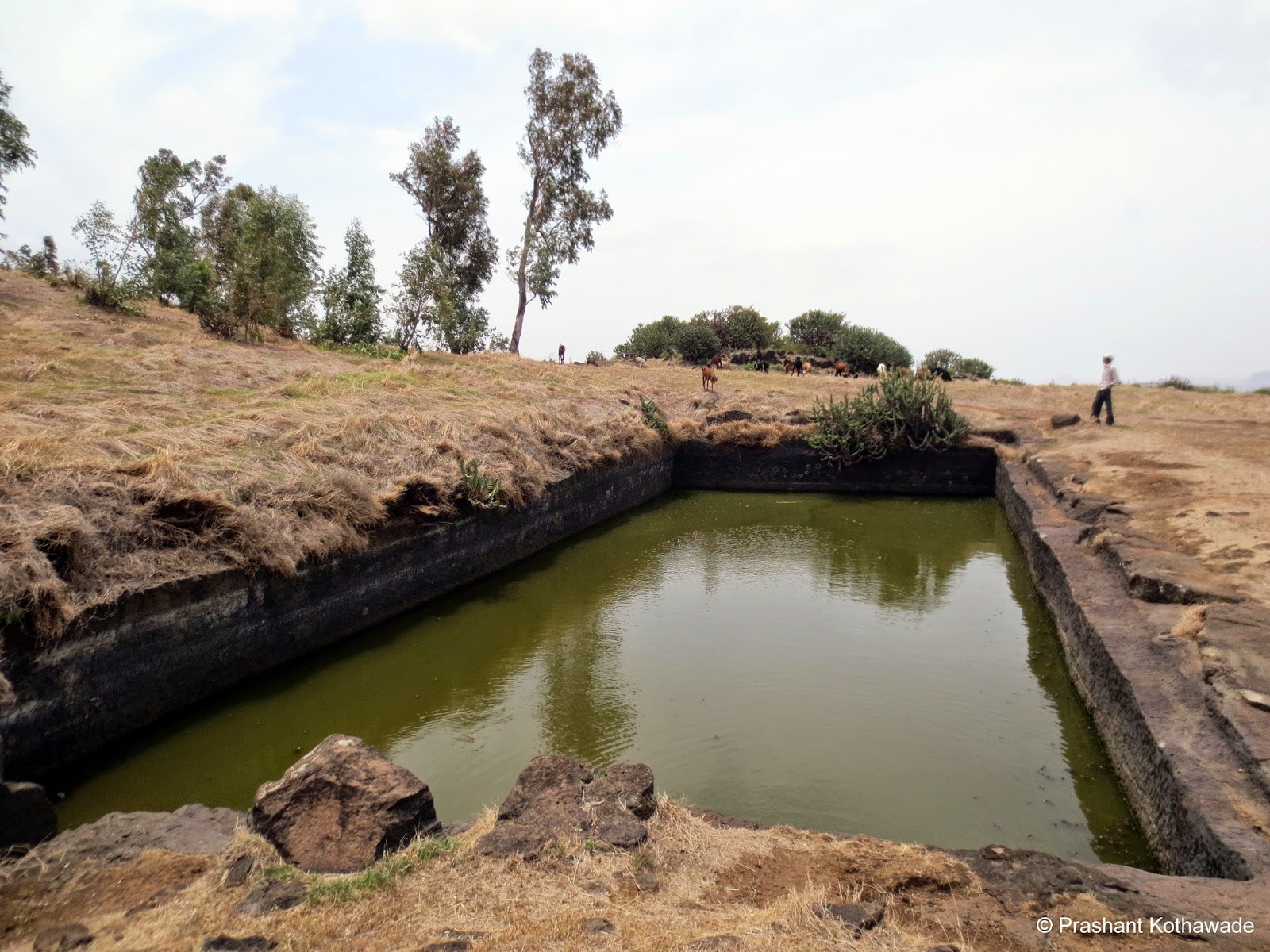 Temple on the right and Citadel on the left: 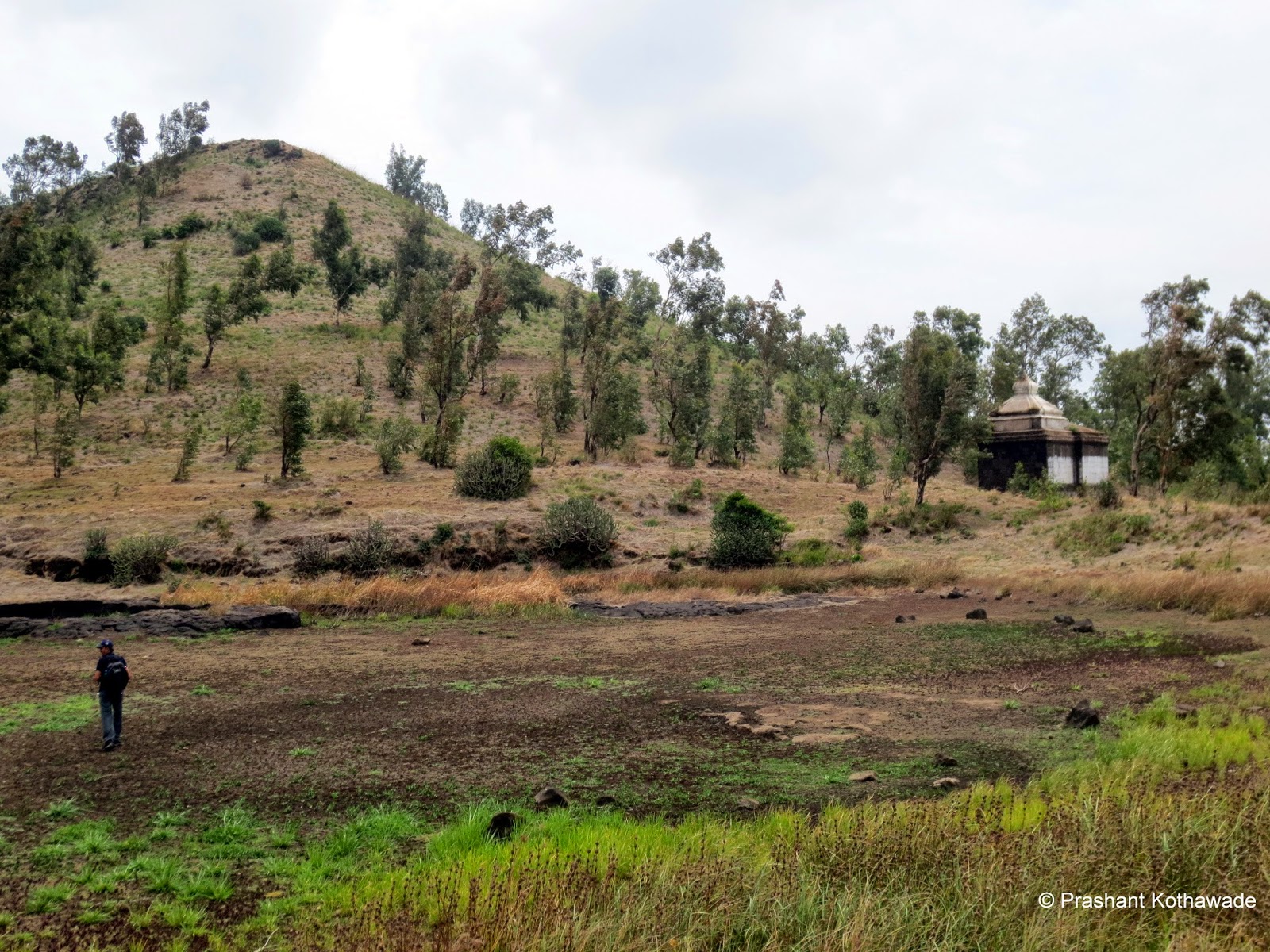 As we entered the temple, we met few trekkers from Mumbai breakfasting in the temple and we struck up a conversation with them to find out that they were on a long trek covering quite a few forts from Junnar region. 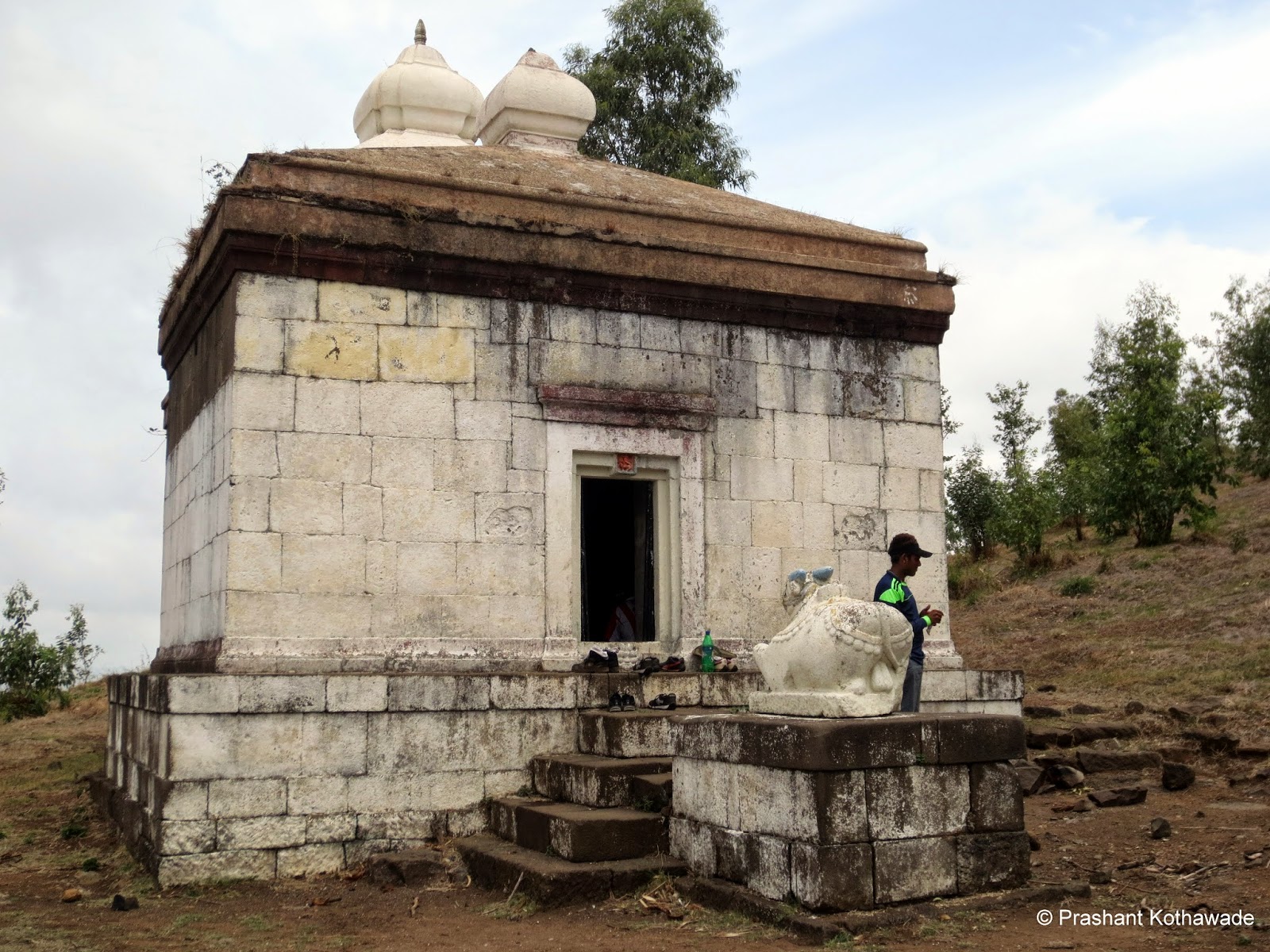 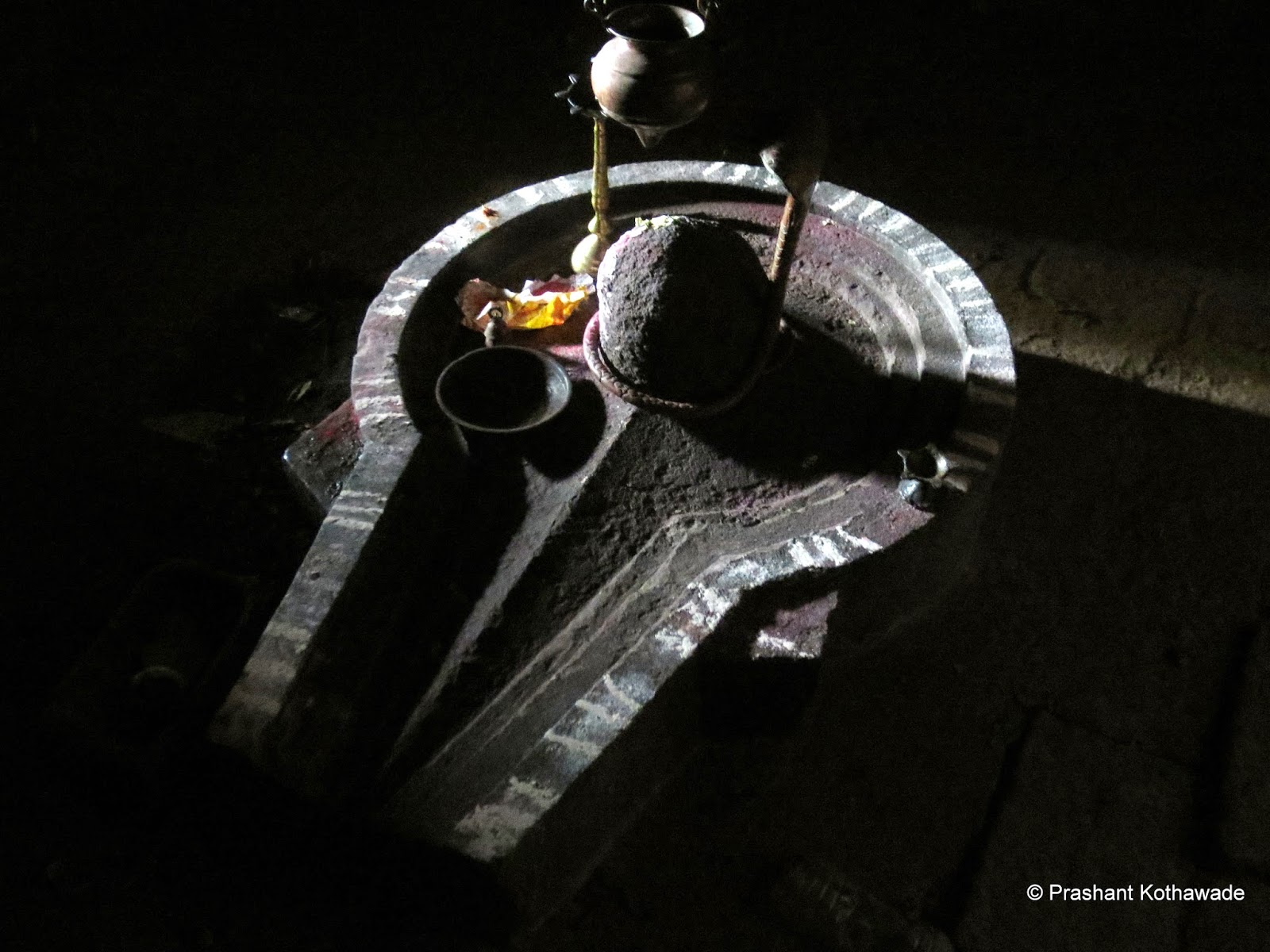 Soon, we climbed on a citadel which is nothing but a small hillock which was a bit slippery and we needed to be cautious to reach on top of it. A nice panoramic view is on offer once you reach to the top. You can easily spot many forts like Shivneri, Chavand, Jivdhan, Harishchandragad from top. 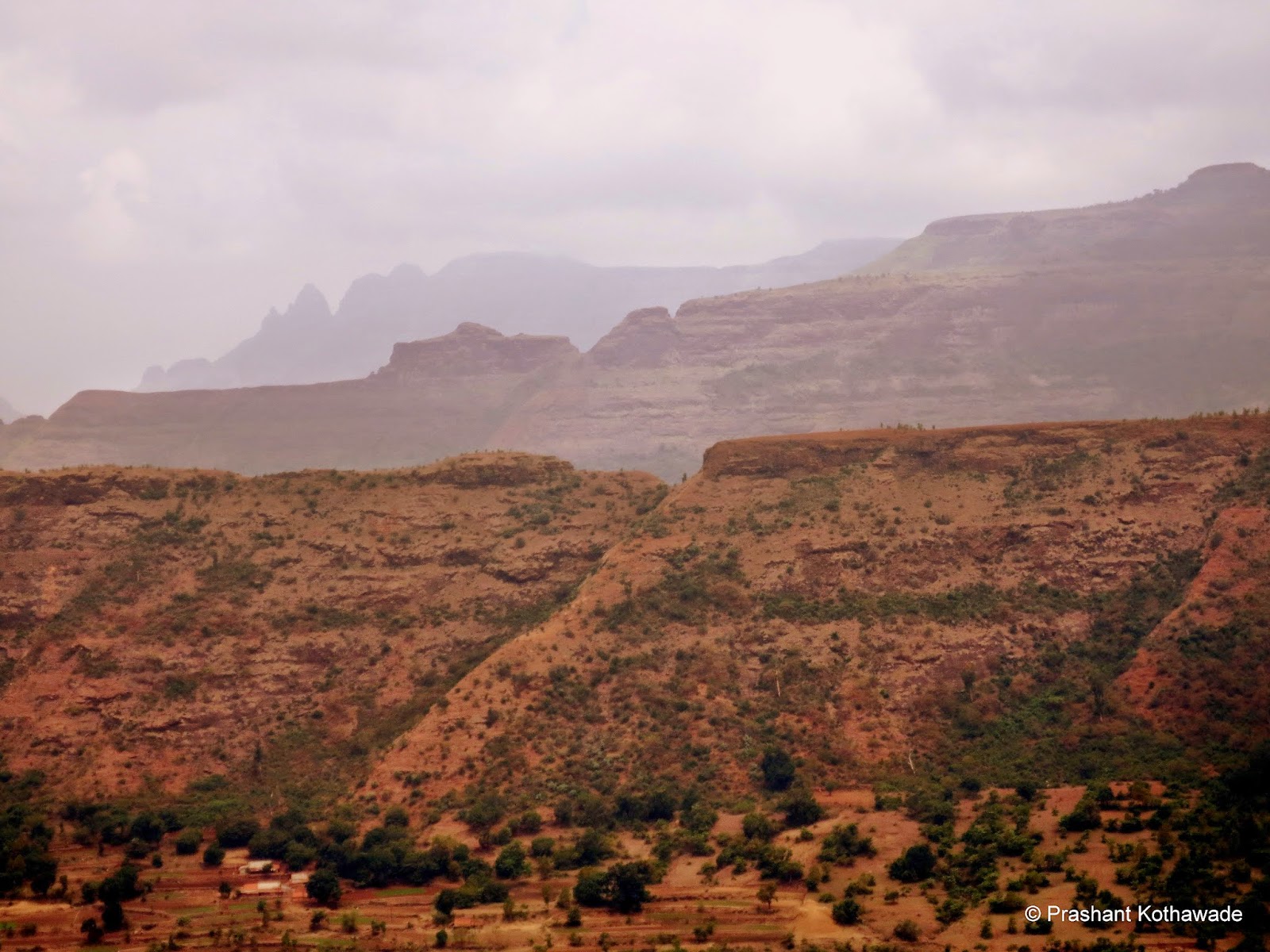 We descended on the other side where Gunaji was resting under a tree while his cattle were grazing. 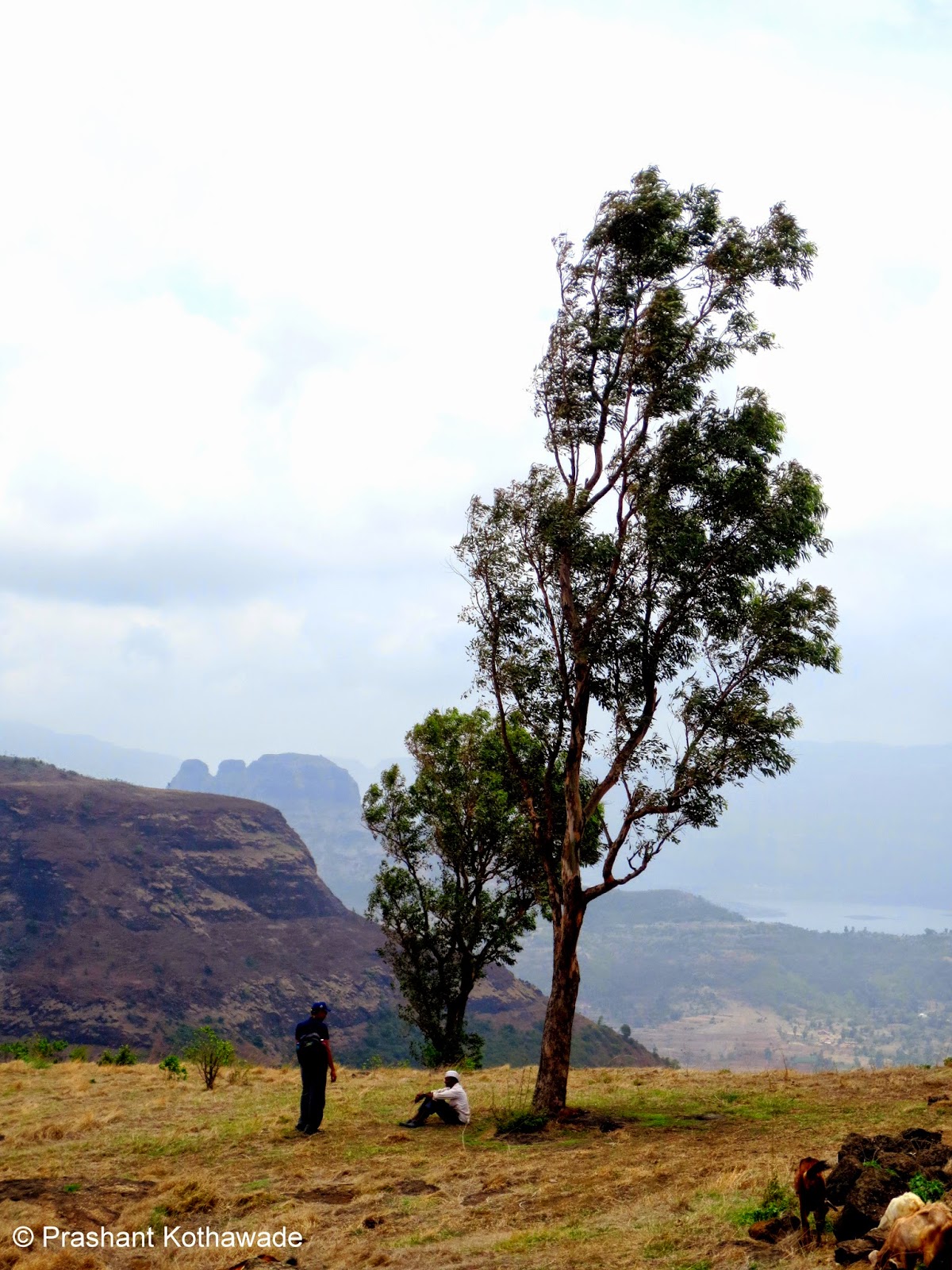 We wanted to check out the other route named as “Khunti Route” - a short-cut route created by villagers by inserting iron rods into the vertical rock face of the fort. It is said to be a thrilling climb.

We came across a group who already had climbed from this route. After chatting with them for a while, I decided to check out the route. It was almost 60% descent with some scree for few meters before start of the actual descent. It was little bit scary; still I was determined to explore it; but my elder brother advised me not to go further. Since the regular on this route, Gunaji wearing the rainy shoes with hardly any grip, descended with a lot of agility and demonstrated us how to descend. And after demonstrating, he again negotiated ascent with aplomb in no time whatsoever. Really amazing!

Gunaji demonstrating how to descend from Khunti Route: 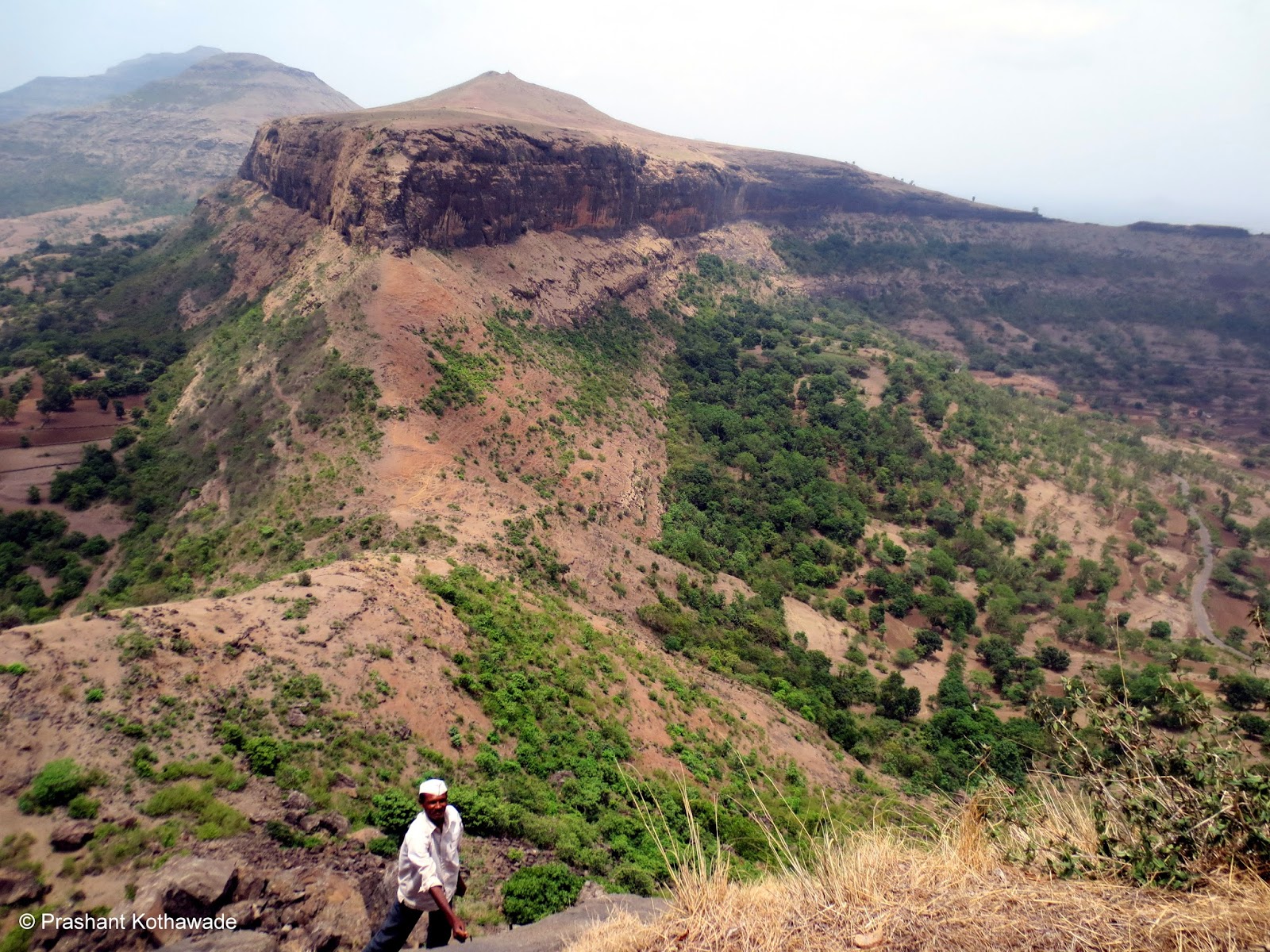 Hatkeshwar with its conical top and vast plains was looking stunning and I got myself clicked in front of it.

As we had to still explore underground chambers, we started trudging towards the temple after bidding adieu to Gunaji who needed some more time on the fort with his sheep. We were feeling little hungry and perched under the shadows of a small tree to munch on the snacks. We were hoping for some rain which never came. As we were resting, everything around us seemed to have become a standstill as if all the nature was taking a siesta.

After having little snacks, we decided to explore underground chambers which were used as storerooms. We had to search carefully to find these chambers - situated on the Western side of the fort near the water cistern and carved in the rock on the left side of the entrance of the fort. 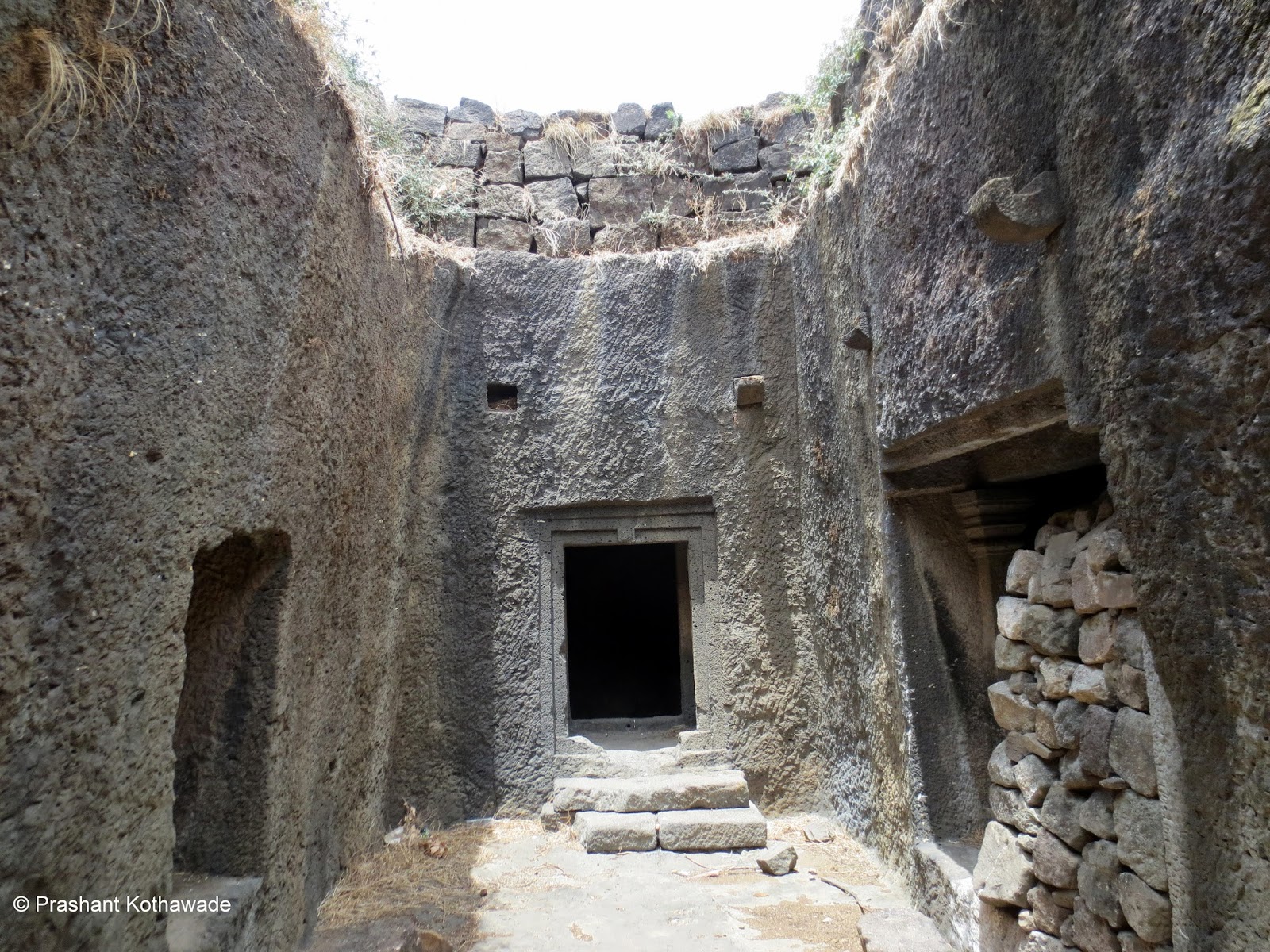 Soon, we were done with exploring the fort and it was time to descend. We followed the same route to descend from where we had ascended. 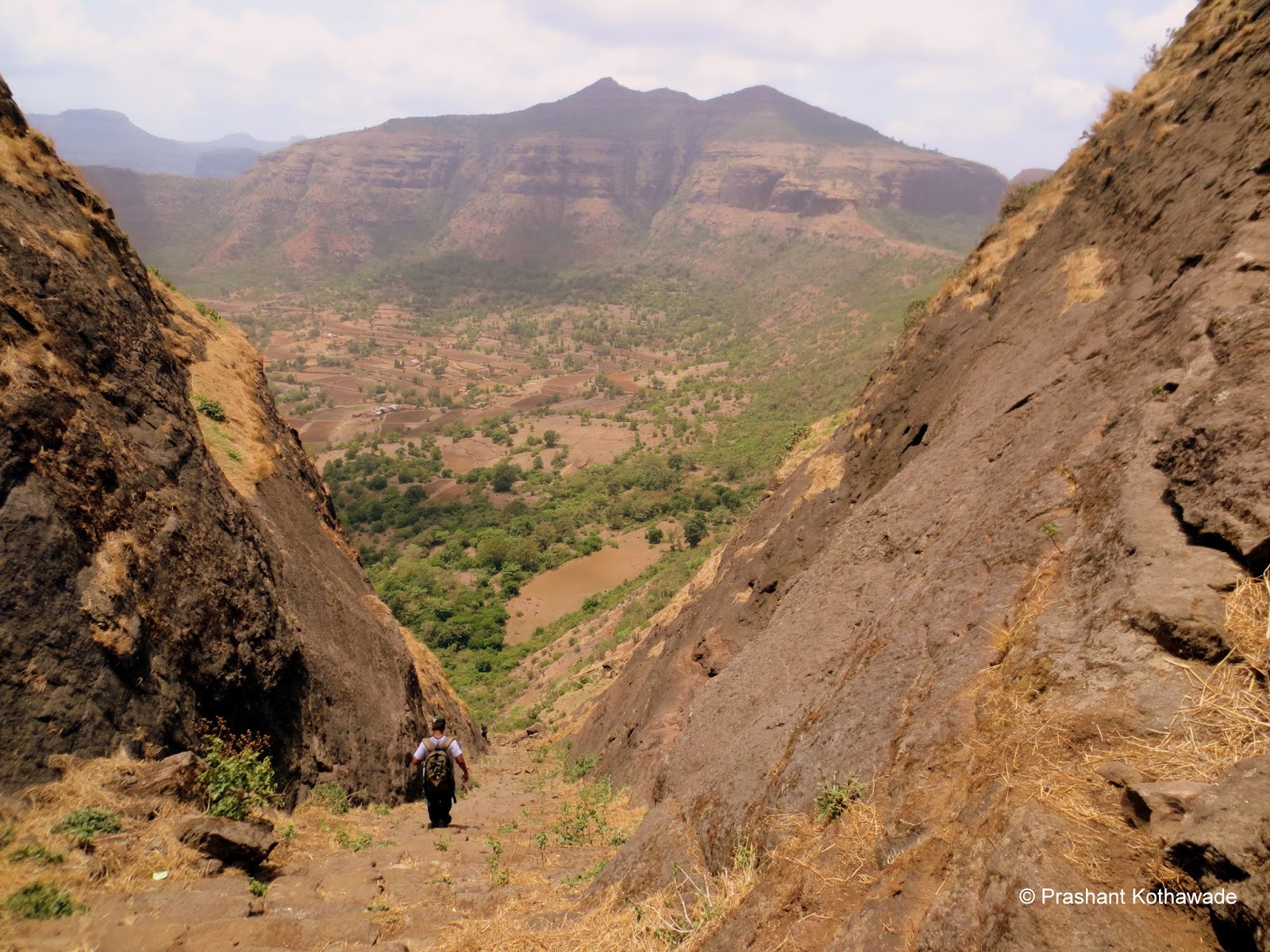 Tushar was ahead of us and he spotted a Jamun (Indian Blackberry) tree on the plateau and shouted to invite us to feast on jamuns. Two guys from Mumbai group also joined us; one of them climbed the tree like a pro and shook the tree and we feasted on sweet jamuns. 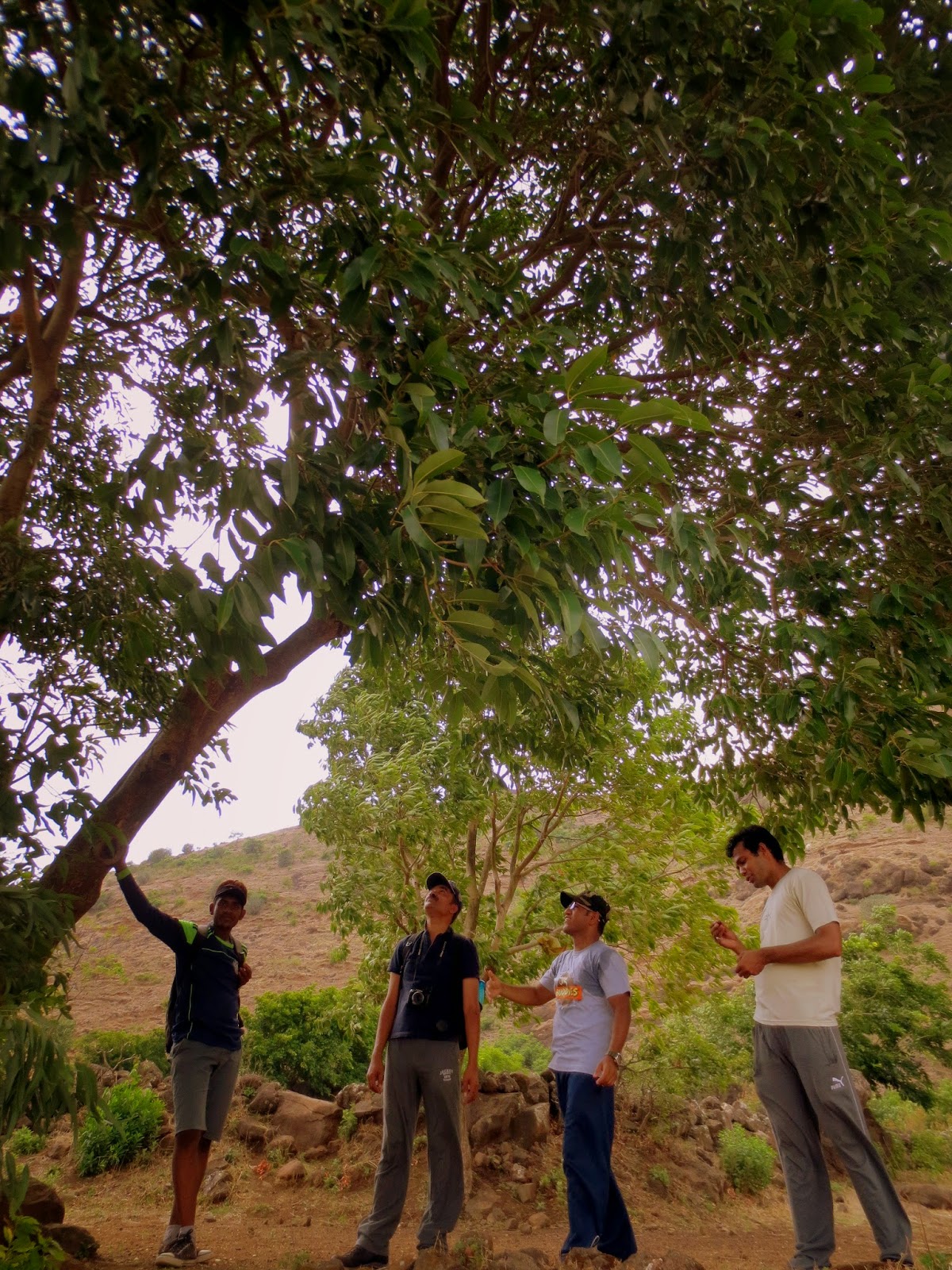 After having a small break of eating jamuns, it was finally time to return to the base. After sprinkling and washing our faces with water, we proceeded for lunch at Junnar. We ordered a Special Thali at "Ashiyana" restaurant suggested by my friend and fellow trekker "Onkar Oak". This special lunch was too heavy; too much for people with a small appetite. We hardly could finish even 50% of lunch. We were stuffed so much that we even thought of skipping Shivneri – our next destination. But as other trek mates had not been to Shivneri, urge of visiting it took the precedence over having the rest and we proceeded towards Shivneri.

We originally thought of witnessing sunset from top of Shivneri fort but even after fully exploring the fort, sun was not ready to set. Besides it was too cloudy and hazy. So we started descending without waiting for sunset and soon reached to our car.

Return journey was uneventful and we reached safely to Pune around 9 pm.

Overall, we couldn't have asked more from this hike. Disappointment of absence of rain was compensated by clear weather, good for photography. Spotting a deer in the wild, a leisurely exploration of the fort, amazing panoramic views from the fort, some serene moments spent inside a beautiful temple, a good exercise for the legs and spending time with a local villager fulfilled all the expectations from a decent hike. Culminating the day on Shivneri fort proved to be icing on the cake.

Hadsar fort, nestled amidst the great Sahyadri mountain ranges fills you with absolute joy with its rich history, good remnants and spellbound views.If you are looking for an offbeat hike, Hadsar Fort won't disappoint you.

Tips for the hikers:
Thank you for reading the blog!

Appeal: No litter; no plastic; no wrappers; keep the mother nature clean!