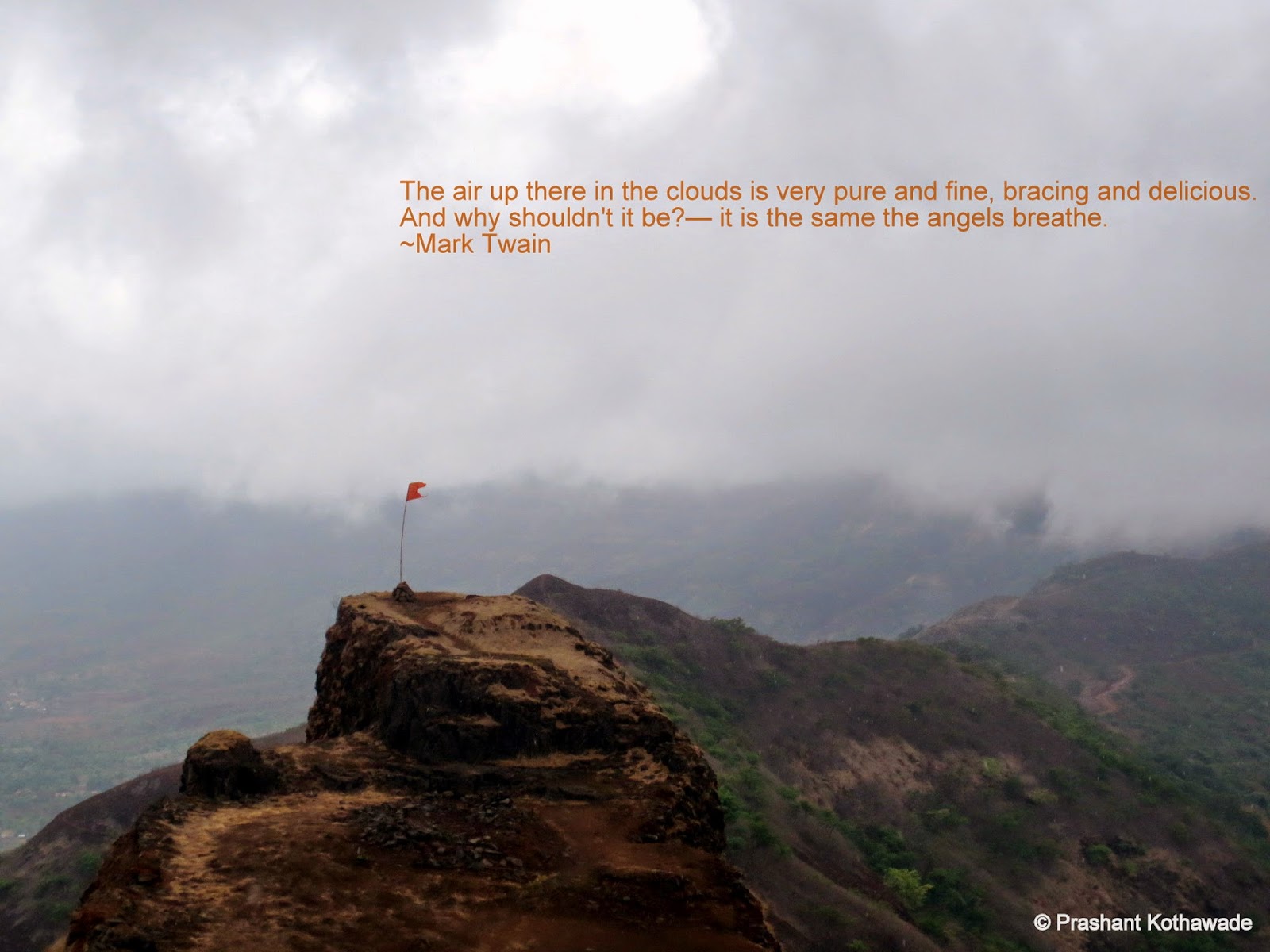 Sahyadri - what a breathtaking place to hike in monsoon! Though I love it wholeheartedly irrespective of the weather, I must admit its beauty in the rains is just incomparable! Last year, during the month of June, sights of carpets of lush green grass adorning the mother nature, sounds of gushing streams and roaring waterfalls had made the whole trekking experience absolutely magical. This year, it was different! Rain god seemed to have deserted us; desperate prayers of rain were unanswered and oppressive heat was taking its toll. Still, there was a glimmer of hope; hope of meeting rain somewhere in the mountains of Sahyadri.

Considering the unpredictable weather, I decided to plan a relatively simpler hike which would be pleasant irrespective of the weather. Kenjalgad was calling since a long time; first glimpse of it from top of Rohida fort had kindled intense desire to visit it sometime in future. So a plan was finalized and with few whatsapp messages, we quickly formed a group of five trek mates – "Sandeepak Phadke", "Ajay Deshpande", "Chinmay Kirtane" and my colleague "Amarbabu Kakamanu" who had recently accompanied me during hike to Prabalgad.

As I was going to hike on this fort for the first time, I gathered information from "Sameer Kadam", another trek mate who had recently hiked on this fort. And there I was; ready to set my foot on a different fort.

Sus Road, Pashan where I stay was the meeting place and as per the plan, Sandeepak and Chinmay arrived sharp at 6.30 am. Ajay and Amarbabu kept us waiting for 30 minutes. Finally everyone arrived around 7 am and we proceeded towards Bhor in my car.

Our first halt was at Muktangan restaurant and after breakfasting, we proceeded towards Bhor. After crossing Kapurhol, you need to take immediate right turn to proceed towards Bhor. Just before Bhor, we sort of got confused after we came across a sign board indicating “Kenjal” village on the left side. Fortunately a villager standing just beside the signboard indicated that this Kenjal village had nothing to do with Kenjalgad fort and advised us to follow the same straight road to reach Bhor first.

It seemed to have rained just the previous night and we were greeted by a wet and damp weather which was such a relief from the oppressive heat. We were ecstatic to meet the rainy weather. 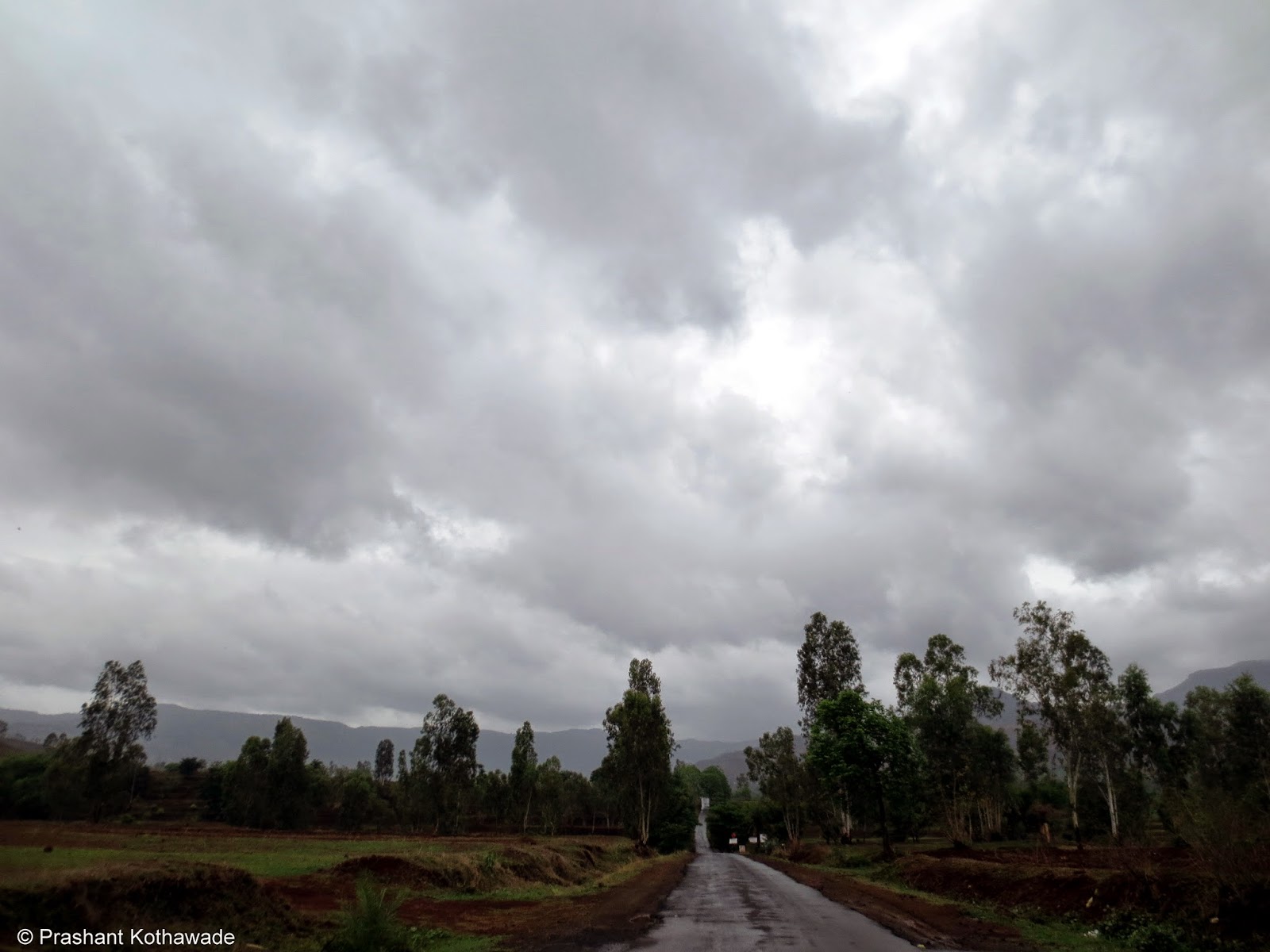 We confirmed the directions for the fort after reaching Bhor and soon reached to Korle village. From Korle village, there is a Kuccha road that goes to Kenjalmachi village, base village of Kenjalgad fort. From this village, it hardly takes 30 minutes to reach on the fort. Fortunately or unfortunately, as it had rained the previous night, villagers advised us not to drive to Kenjalmachi village to avoid wheels of the car getting stuck in the mud on the Kuccha road. They further instructed us to park our car in Korle village itself  and asked us to start our hike from the village itself. This was putting our plan out of gear; but we had no other option.

As this was supposed to be a short hike, we had planned to lunch at some highway restaurant while returning to Pune;but as our hike was going to turn into a long one, we decided to make provision for the lunch in Korle village itself. We inquired in the village who could serve us lunch on our return and we were redirected to the house of "Vasu Wadkar" where we placed our lunch order. We already made it clear that we would come back around 3 pm for lunch. After making arrangements for lunch, we finally started our hike.

A couple of villagers were going towards another village that was on our route and they advised us to take a shortcut which was steep to save our time. We heeded to their advice and proceeded towards the shortcut. 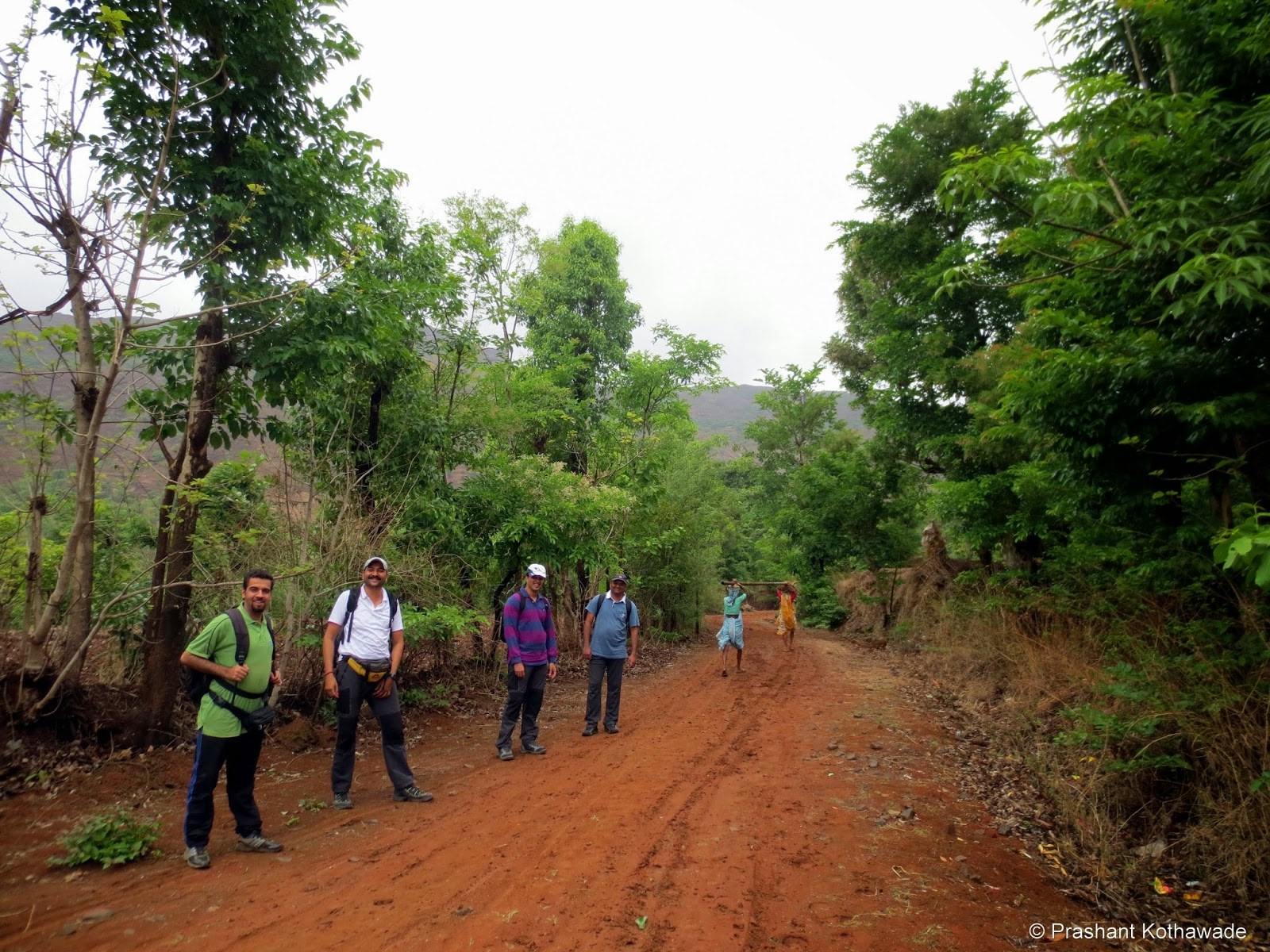 The shortcut turned out to be a fairly steep climb (almost 45% ascent). We had to climb parallel to the electric poles that were carrying the electricity to Kenjalmachi village. 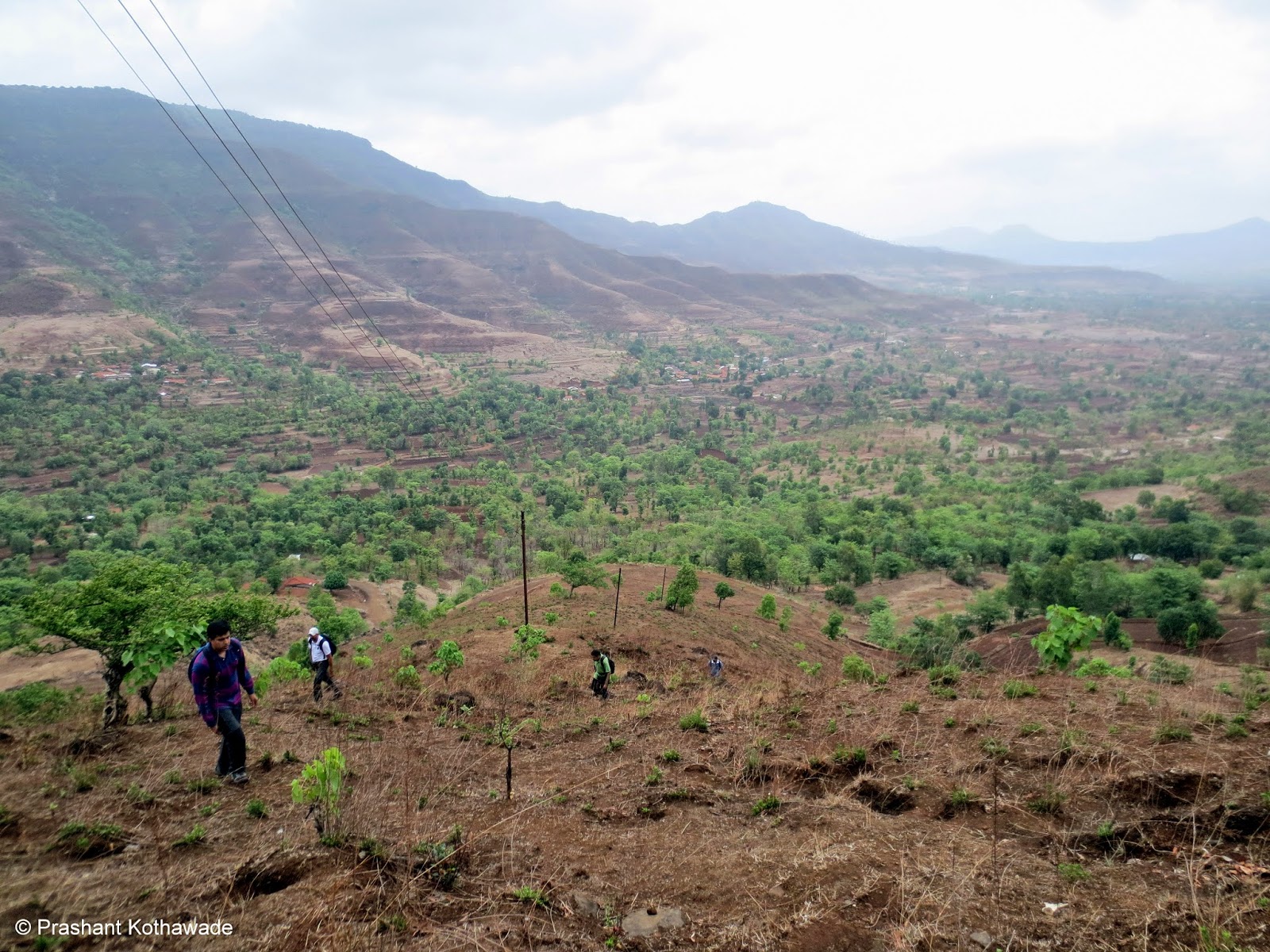 Chinmay was finding it difficult to ascend with his slippery shoes. At one point, he had a bad slip and he slipped in the mud with his full body in the mud with head down. Poor Chinmay! I hope after this incident he spends some money and buys a new pair of good hiking shoes!

Chinmay - down but not out: 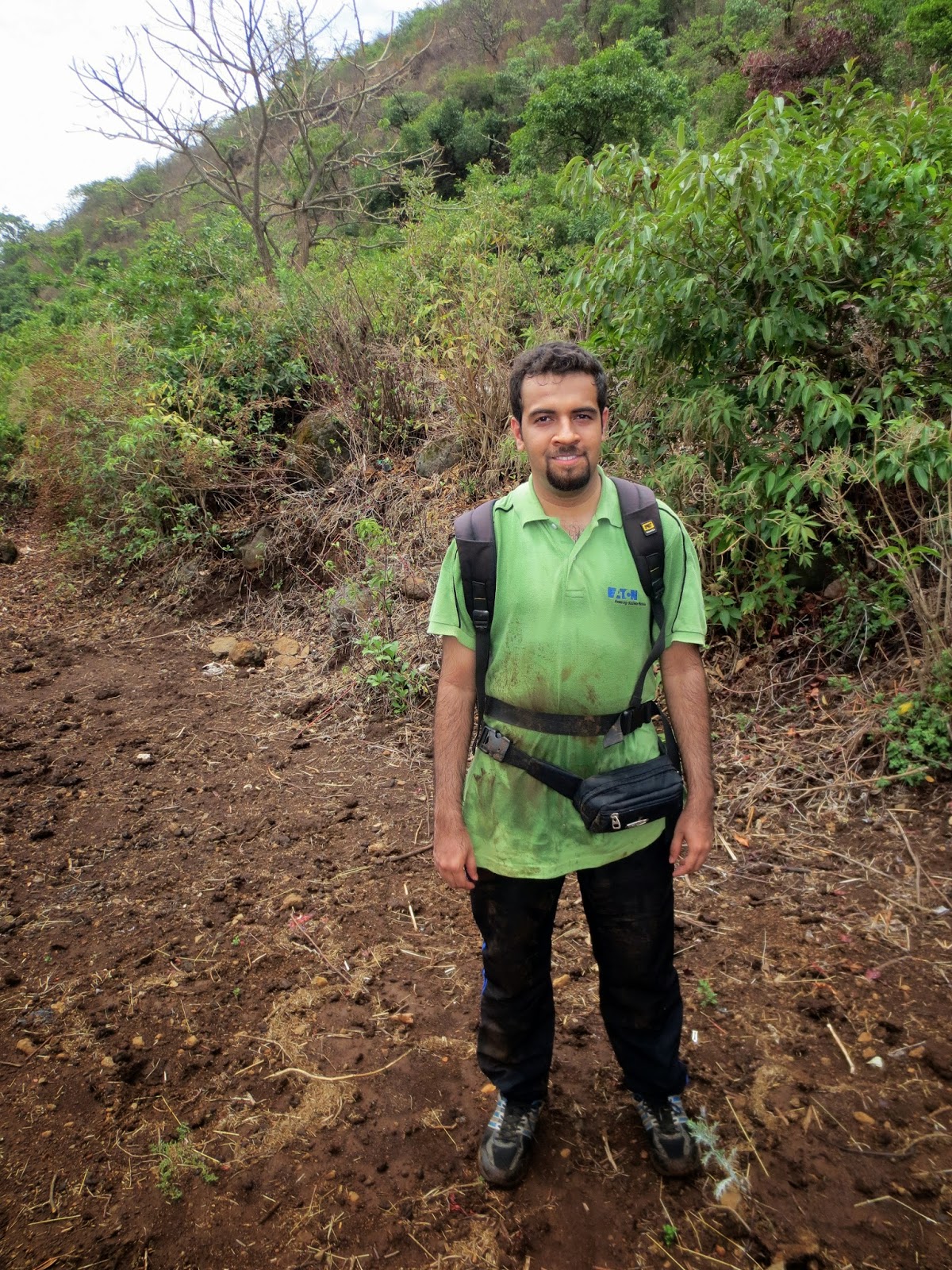 On reaching Kenjalmachi village, we came across few kids playing pebbles and I asked one of them to come with us as a guide. The kid seemed to be arrogant and even did not seem interested when I offered him some money. Few of the villagers scolded the kid and finally he agreed and by that time, another kid also agreed. I finally selected the kid, Dynanesh who appeared to be humble unlike the other kid and we marched towards the fort. 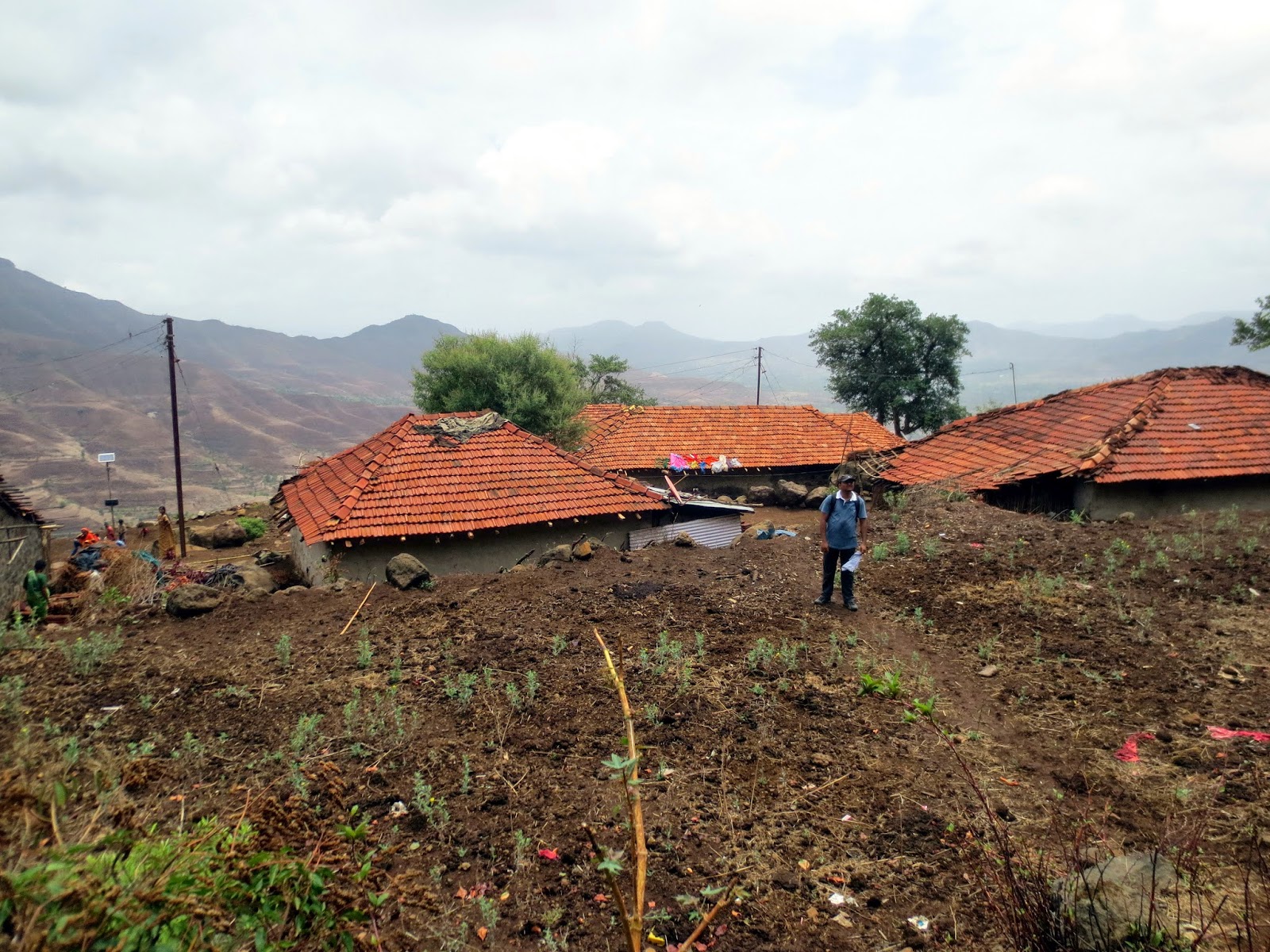 Along the way, Dynanesh stopped at a plant of Jungli Karvand and plucked a lot of Karvands for us. Finally we reached to a small plateau from where Kenjalgad built on top of black, vertical scarp was looking absolutely stunning. 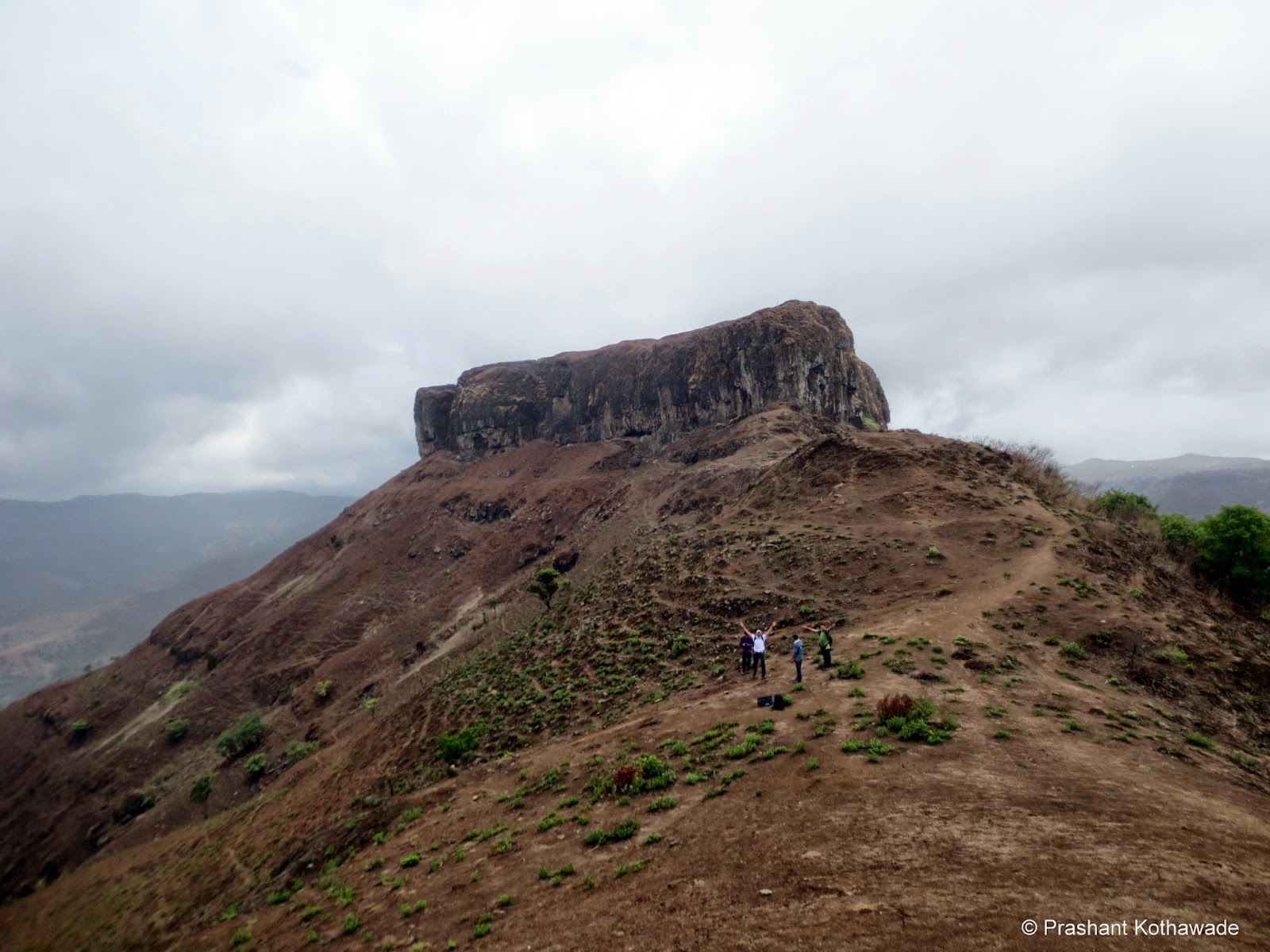 On the other side, Dhom dam was looking enchanting though it was only partially filled. 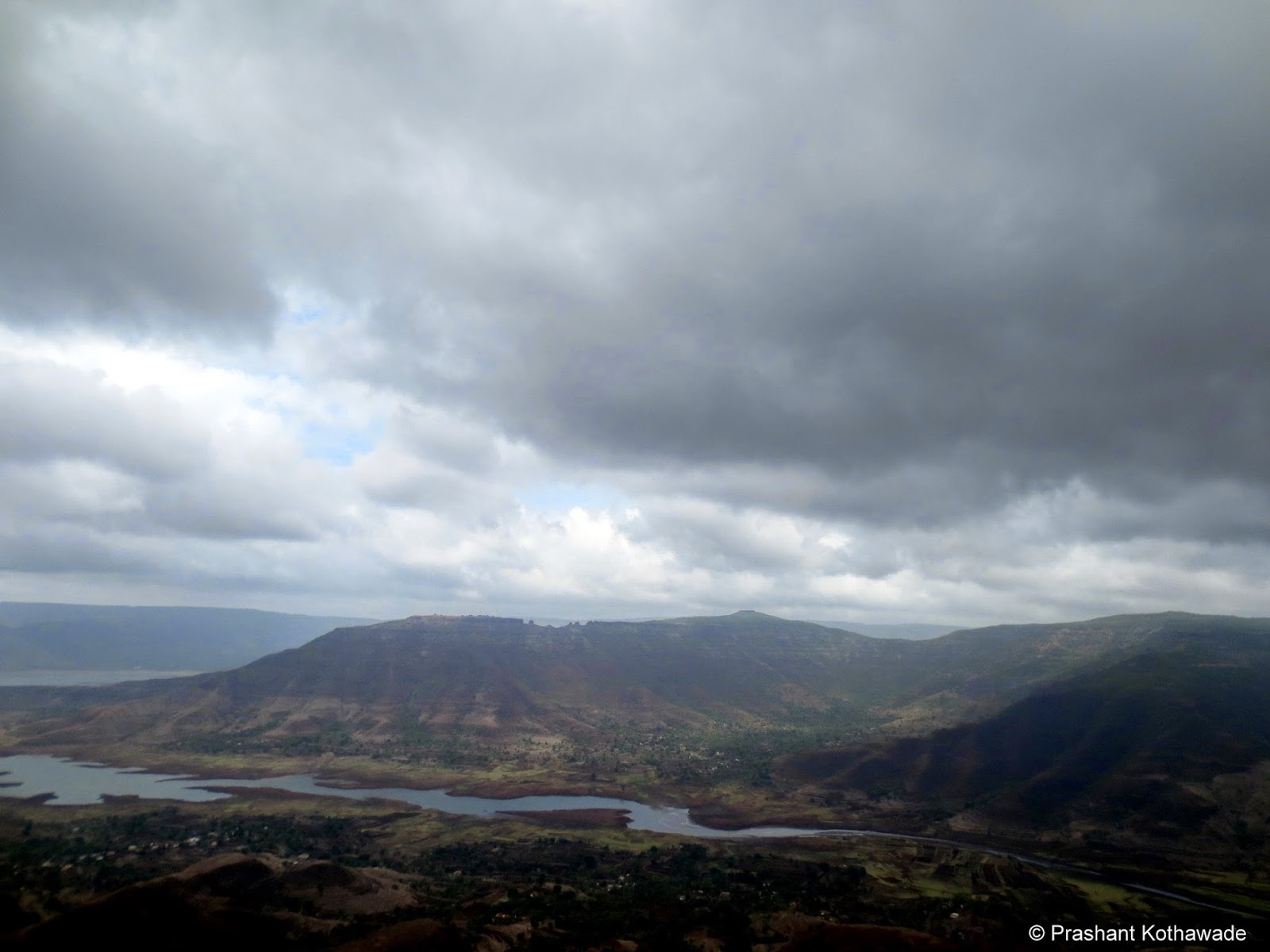 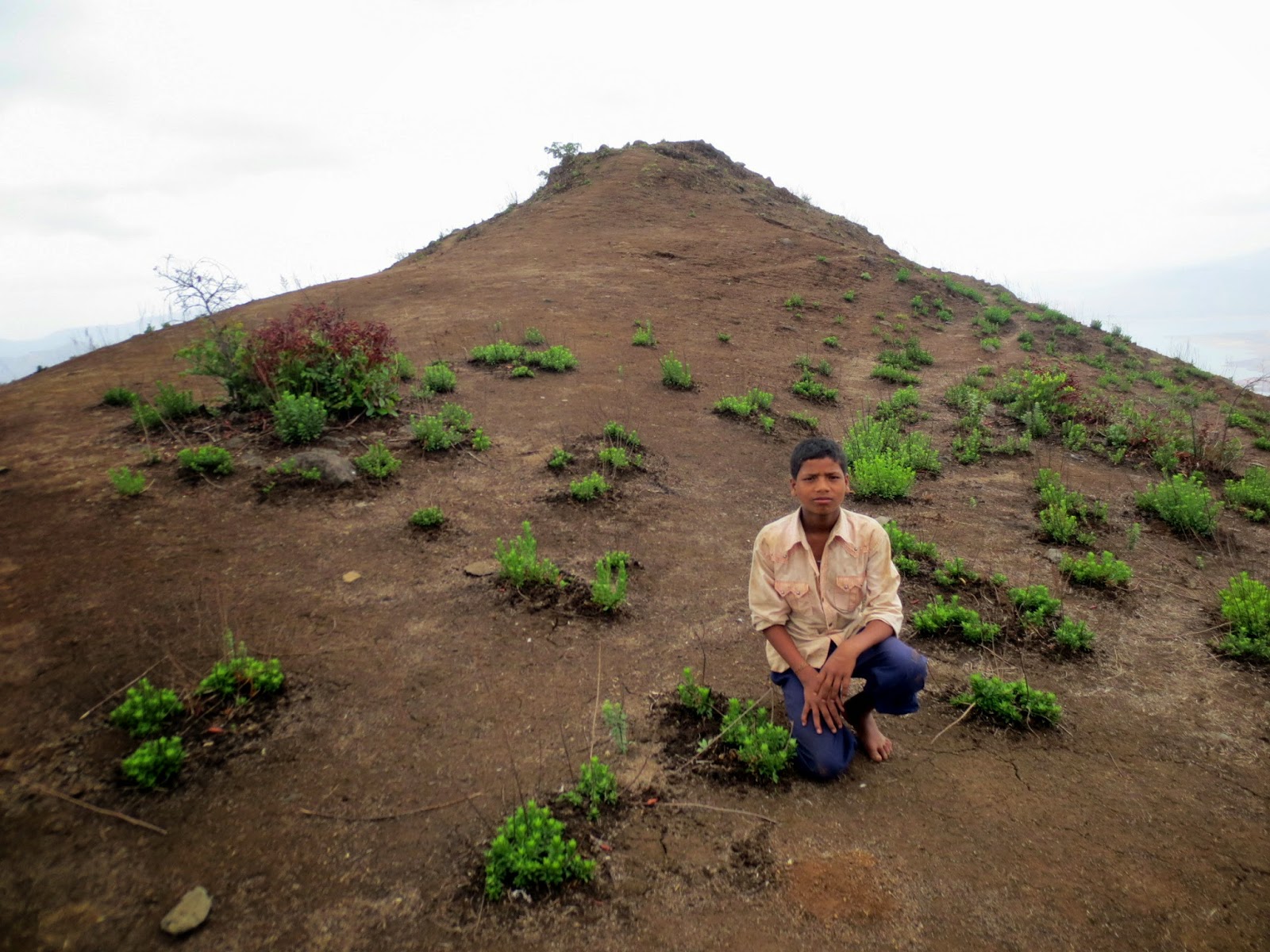 After spending few minutes and doing some photography, we proceeded towards the fort. Steps were not visible and I went ahead to check out a small traverse. Finally I was able to locate the steps and called on others to join me. As I was waiting for others to join, I heard Amar’s shouts to convey us that he wouldn’t be coming and he would wait till our return. He was scared to walk on the narrow path of the traverse. Finally Sandeepak went back and somehow coaxed him and brought him safely with the help of the stick. After negotiating the challenge, Amar seemed to be very happy; glow of conquering his inner fear was clearly visible on his face. 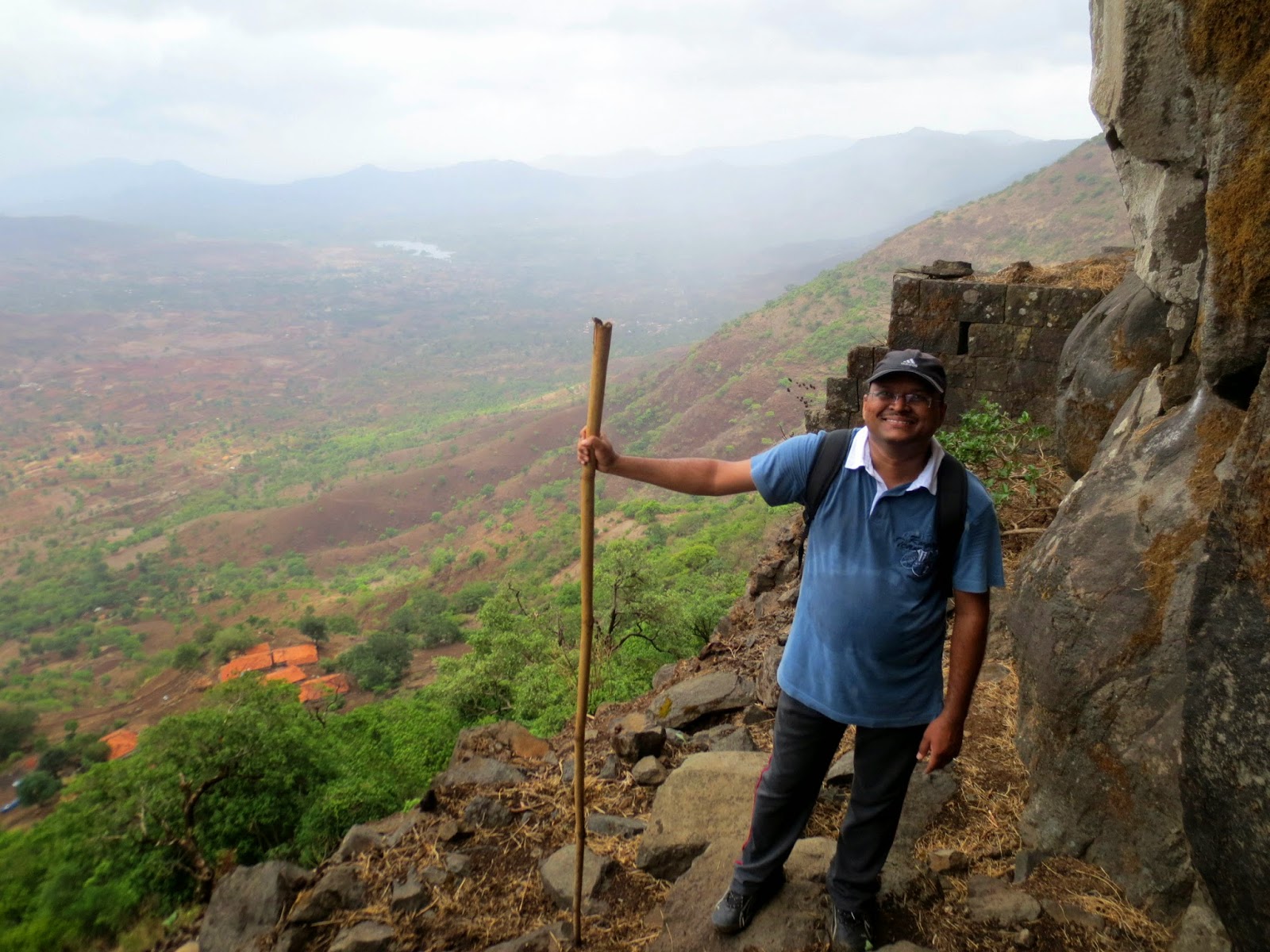 Cave before you come across steps: 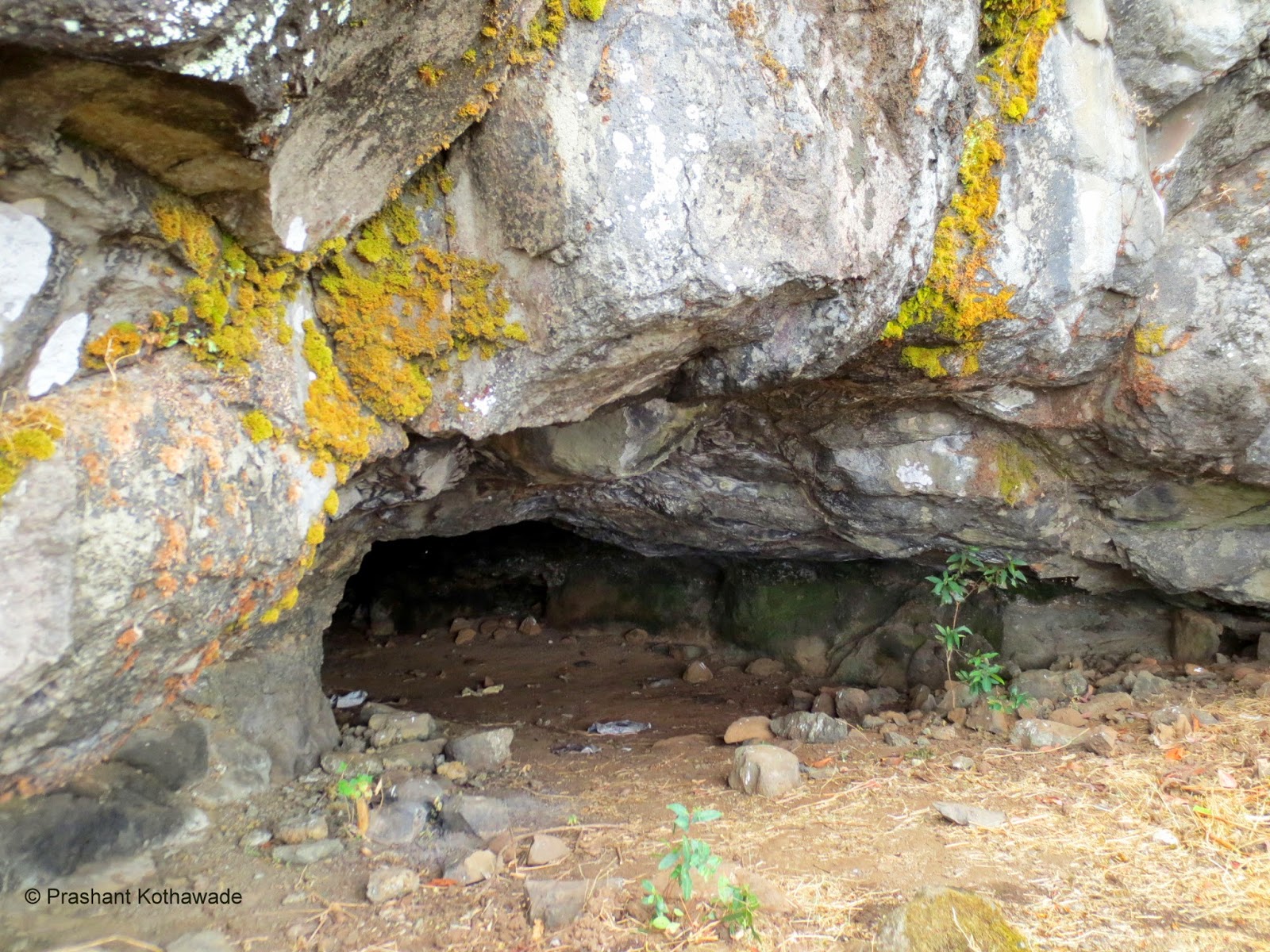 Steps that take you to top of the fort: 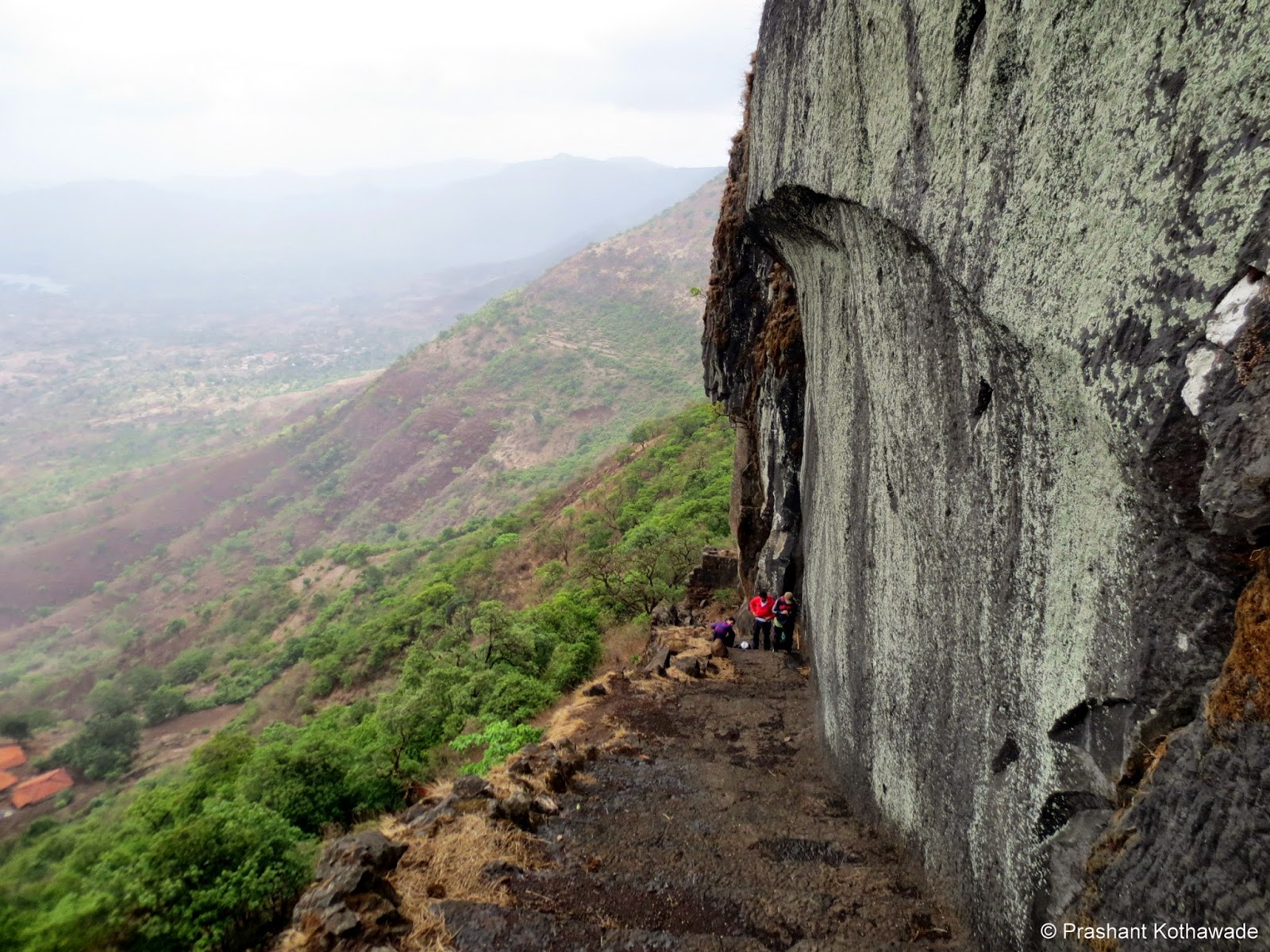 Entrance of the fort is totally destroyed and there are hardly any remnants visible. On entering the fort, we were expecting a lot of grass on the fort but were surprised to see a totally barren plateau devoid of any grass. It was easy to locate all the remnants on the fort. 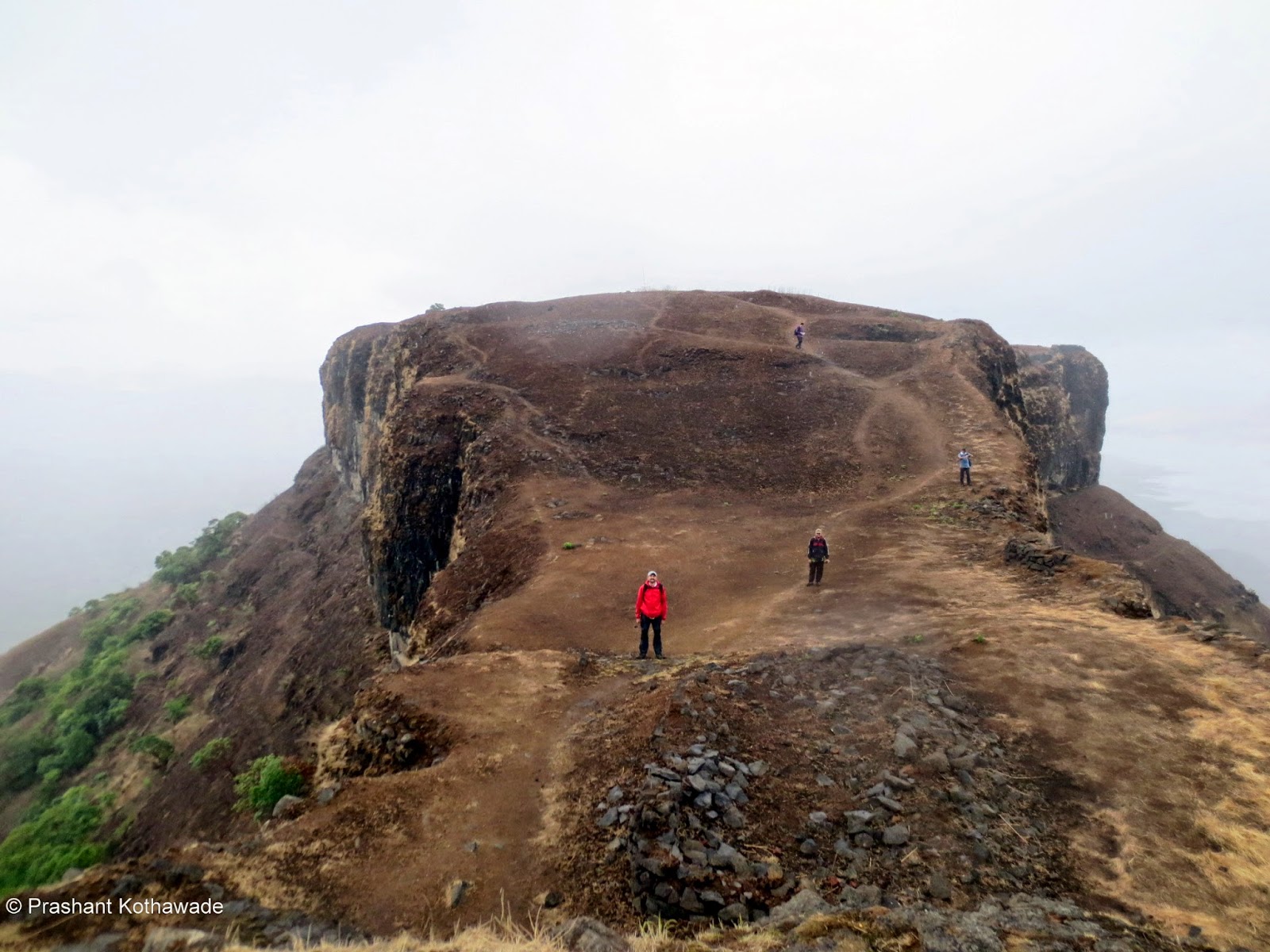 Remnants of the temple on fort: 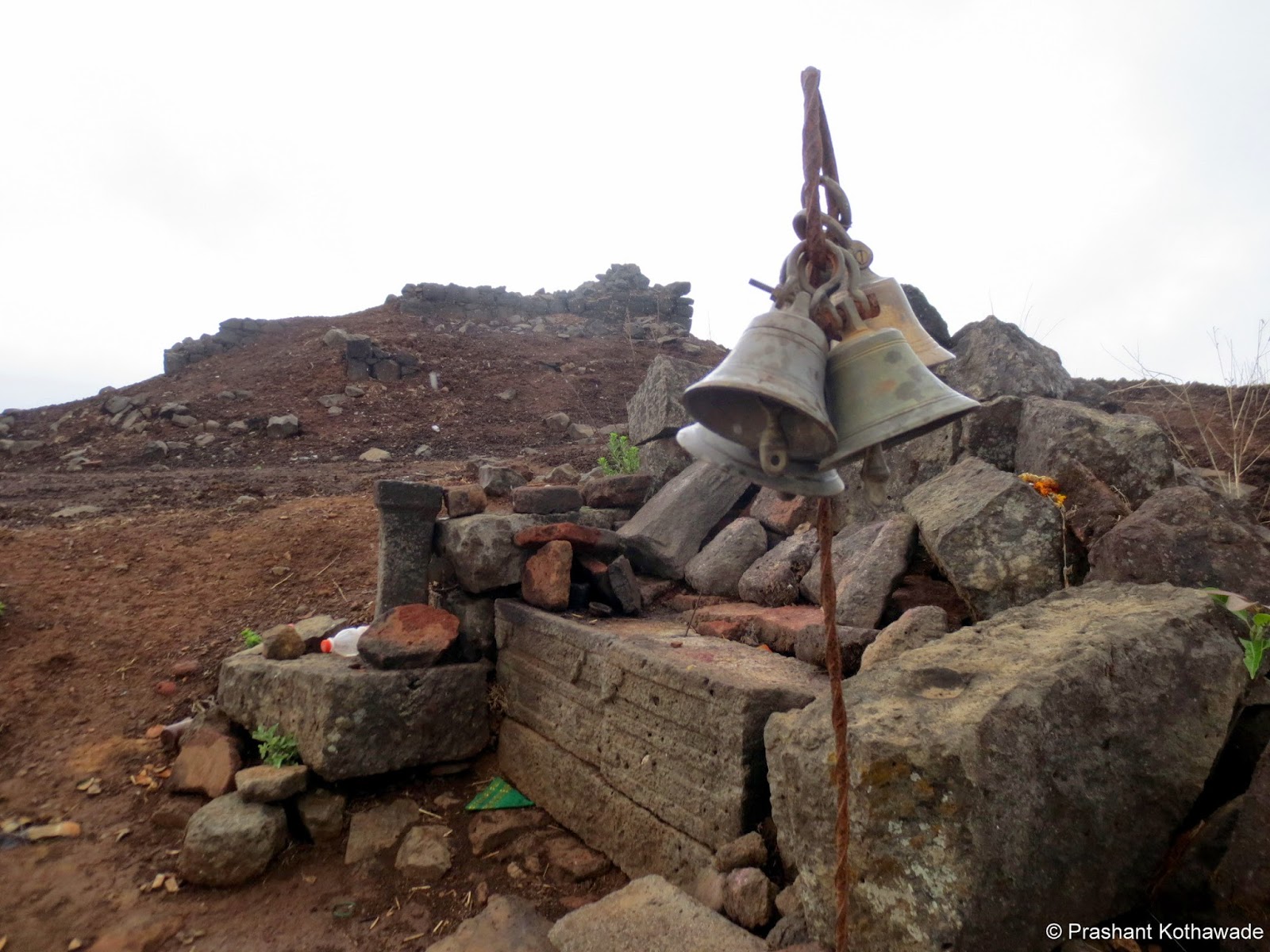 Other remnants on the fort: 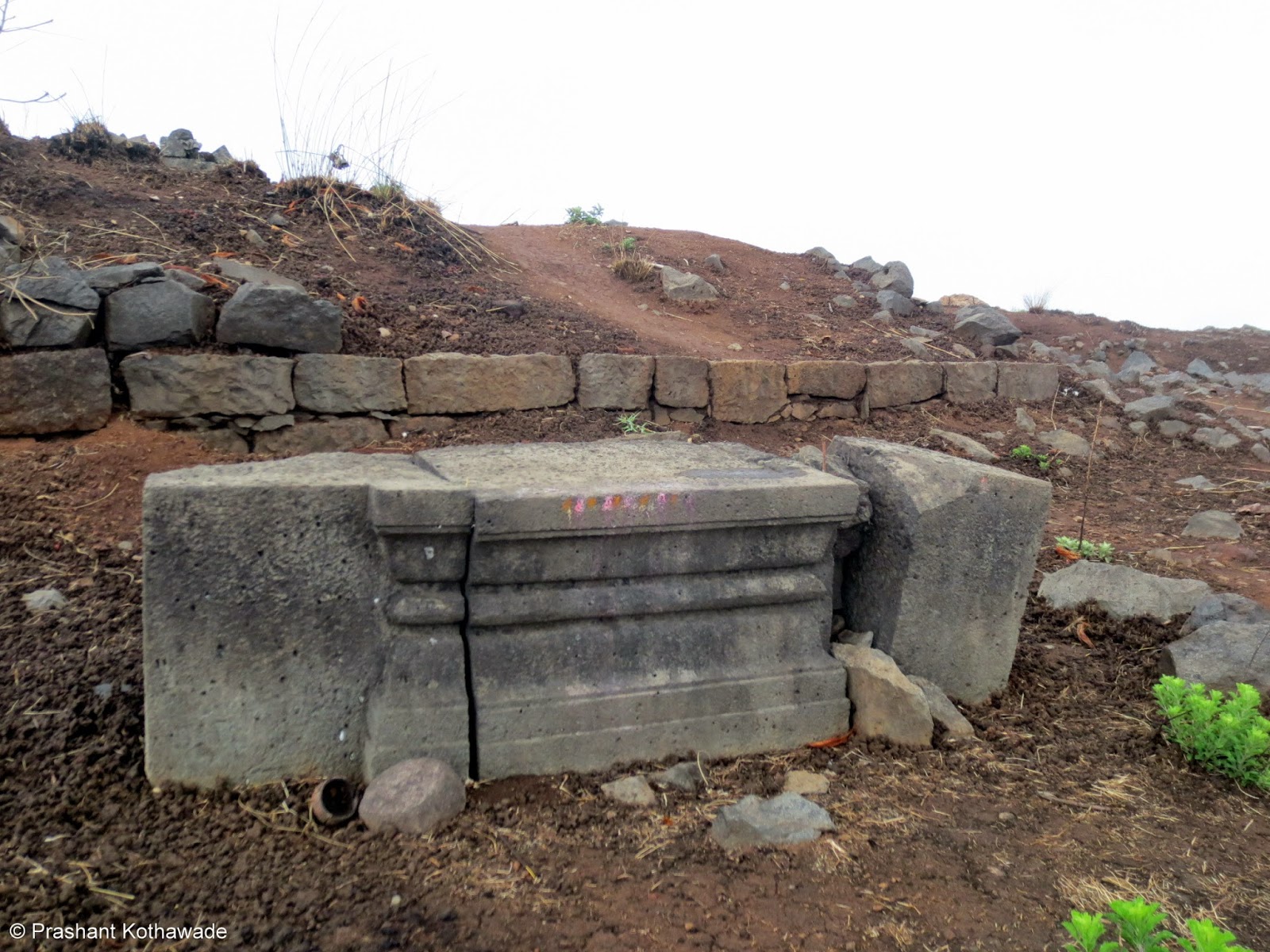 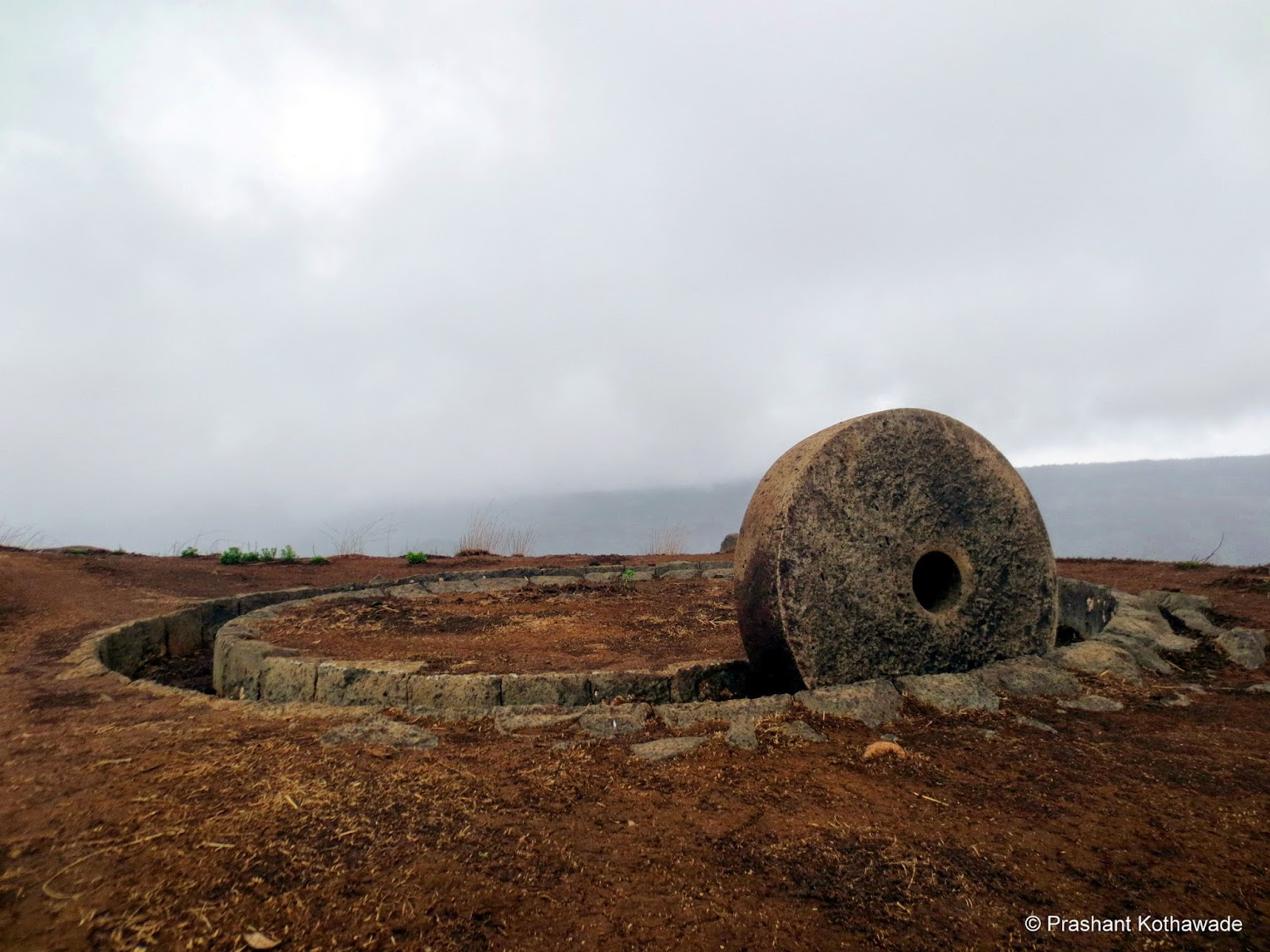 While we were exploring the fort, a light shower came and the weather became absolutely magical. 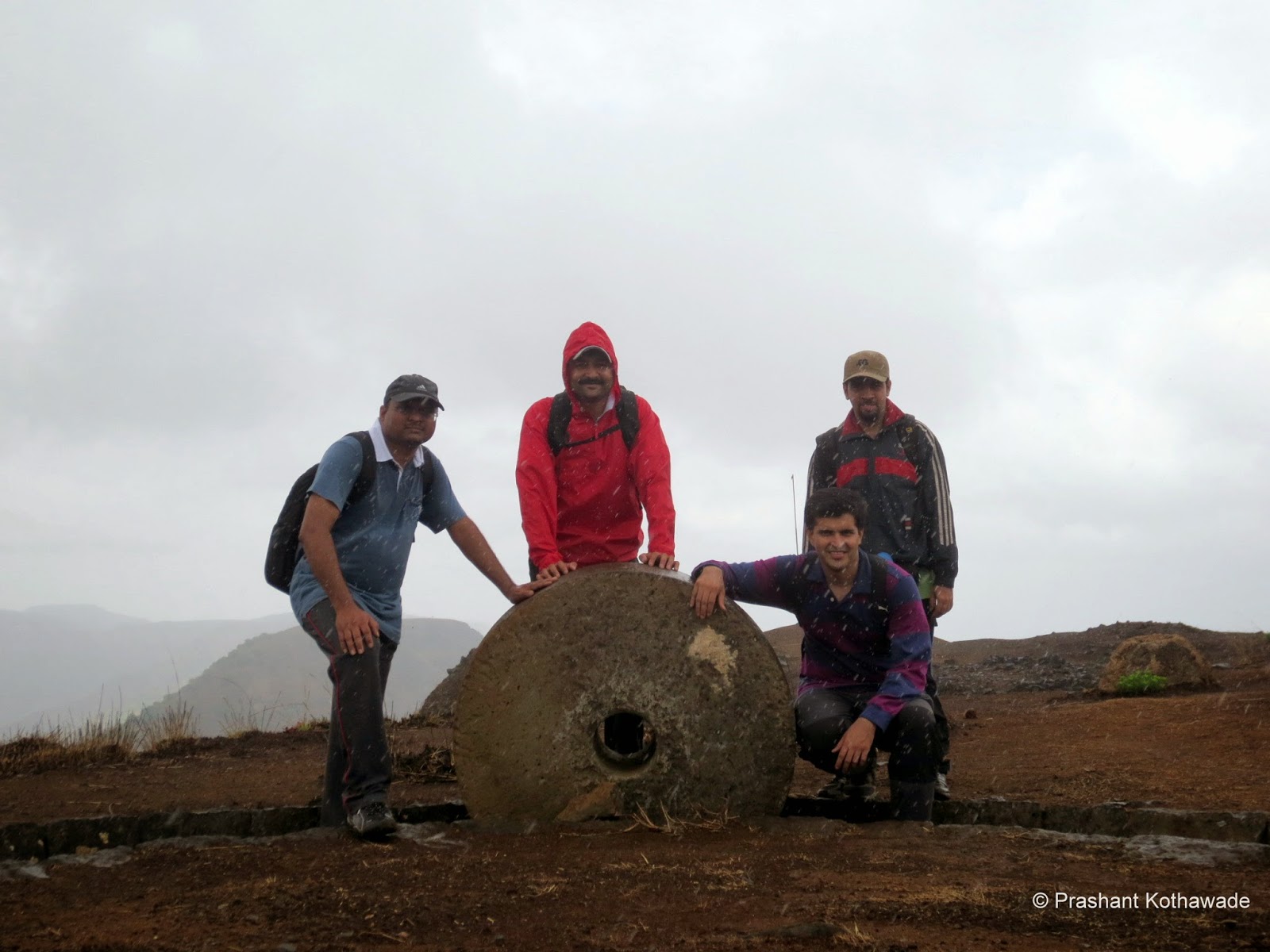 We got faint glimpses of Kamalgad as it was engulfed in the clouds most of the time. Same was the case with massive Raireshwar Plateau.

Raireshwar Plateau engulfed in the clouds: 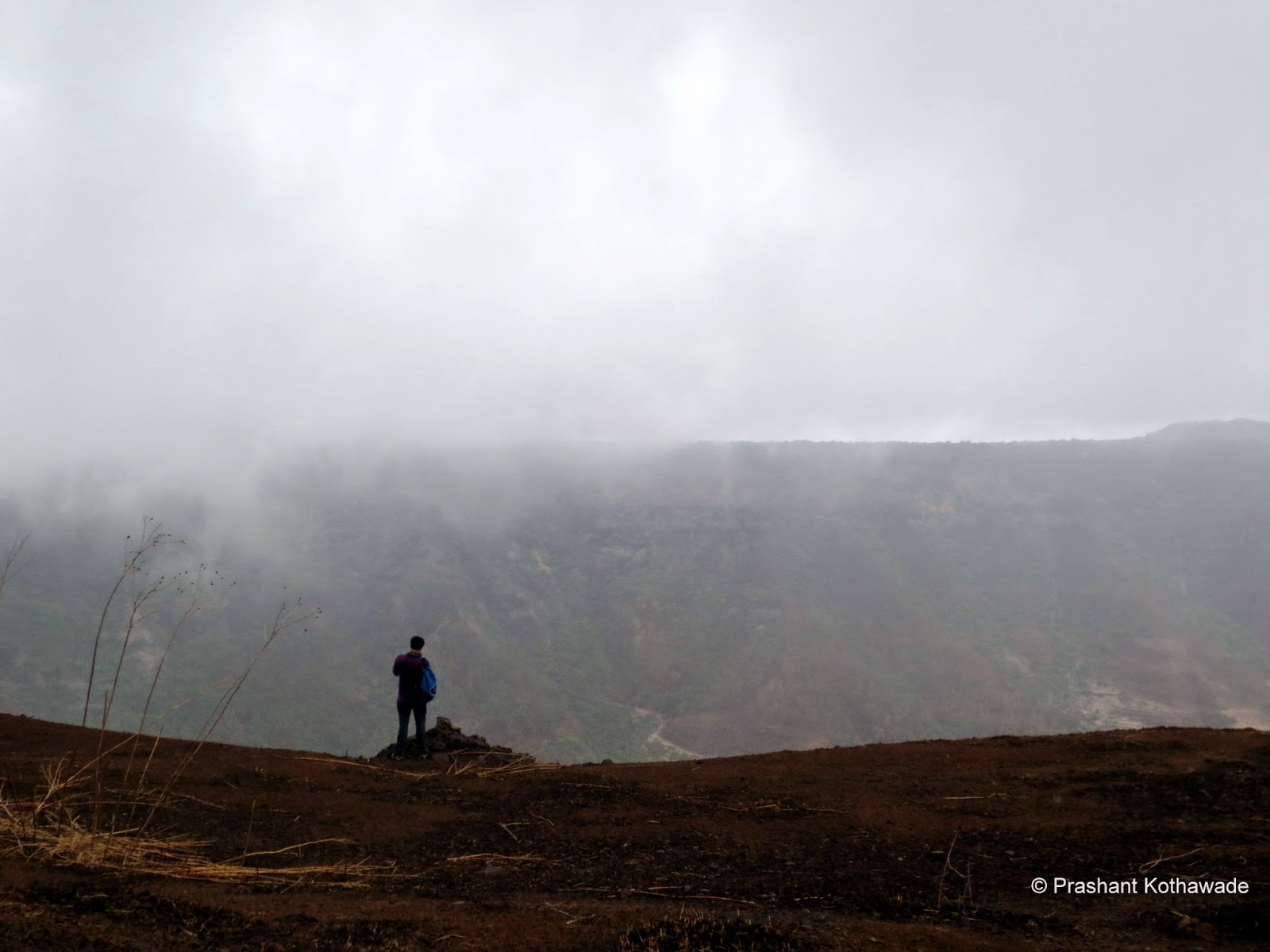 A lone standing structure on the fort: 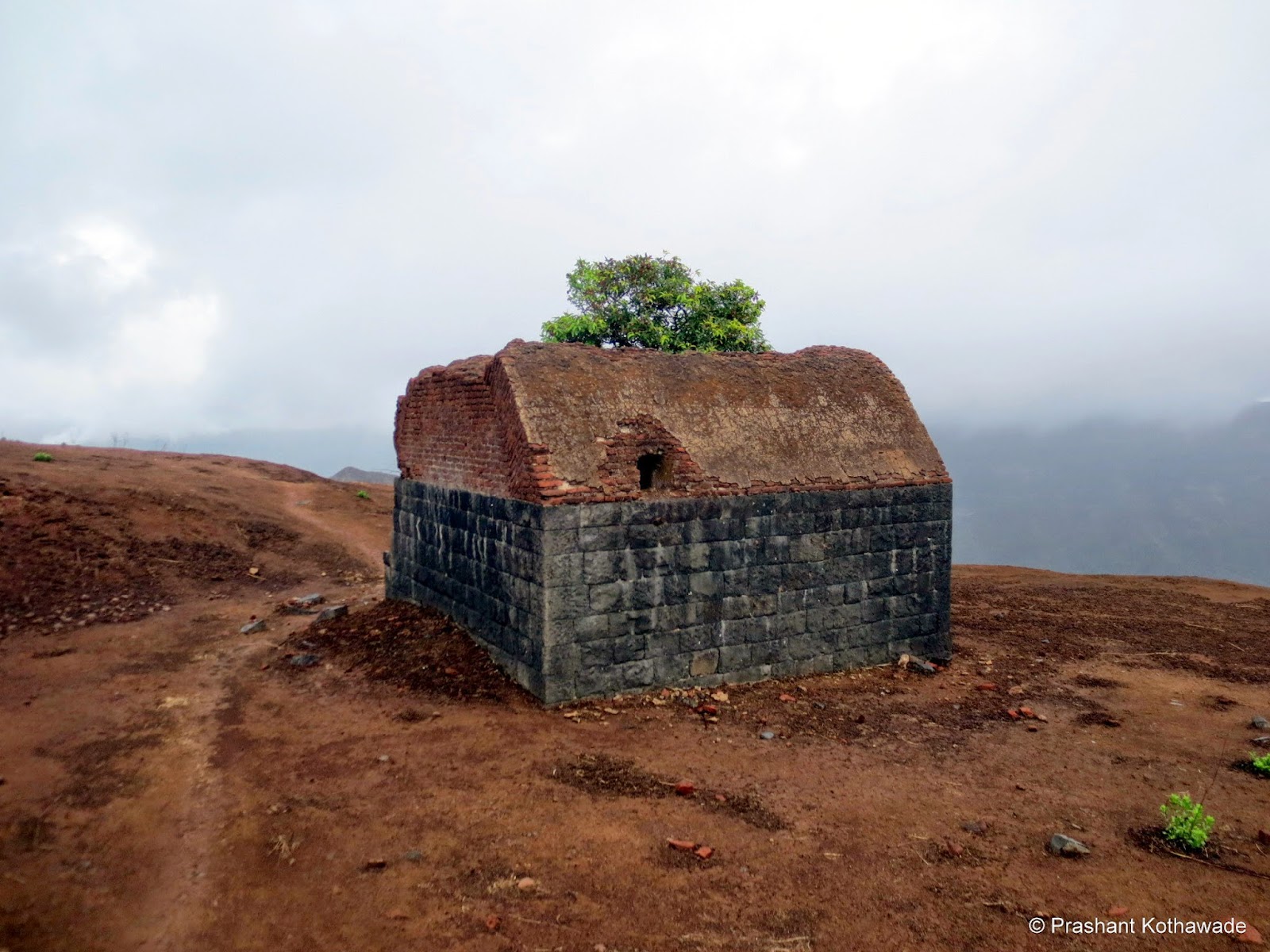 Bastion of the fort: 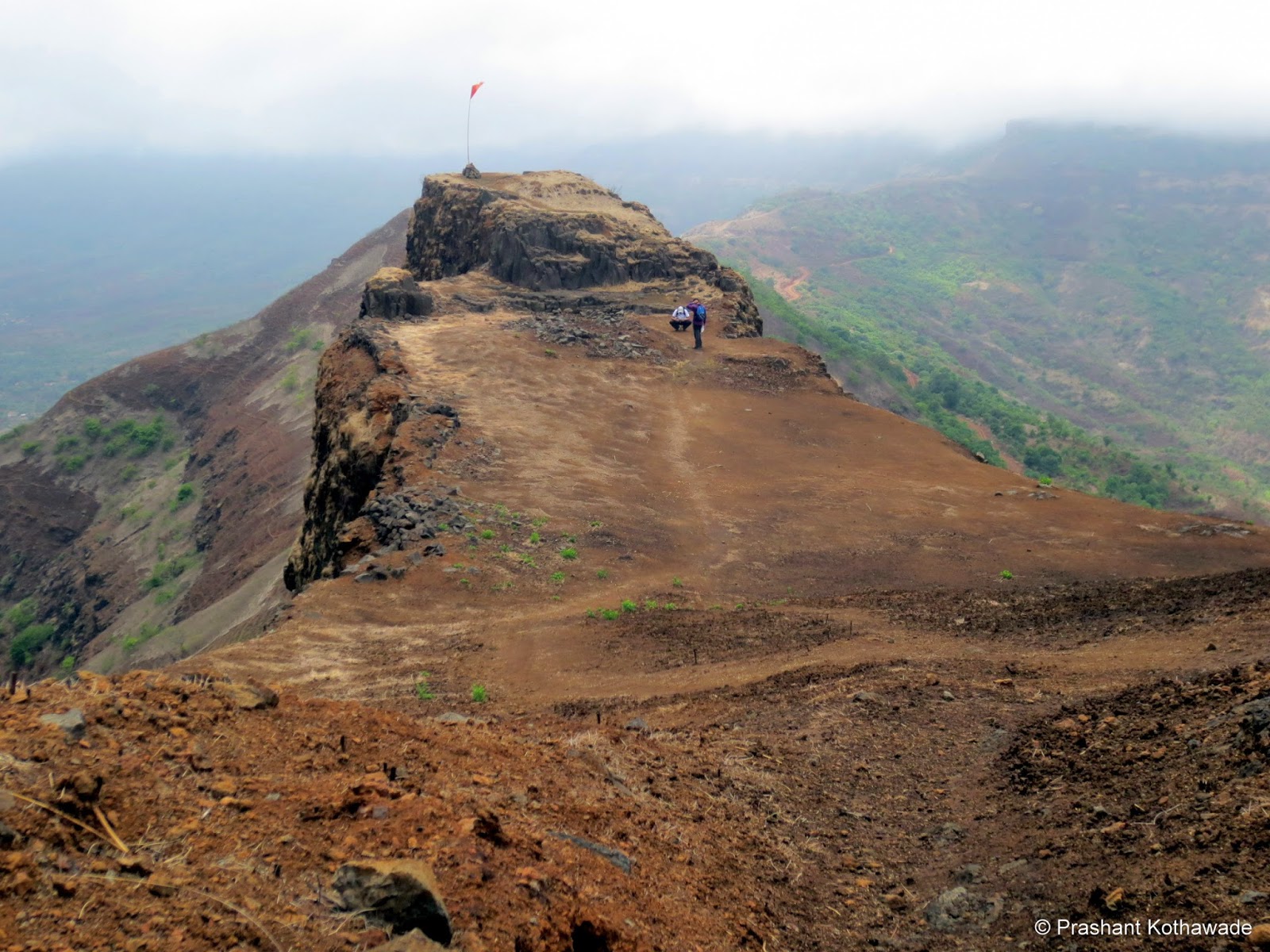 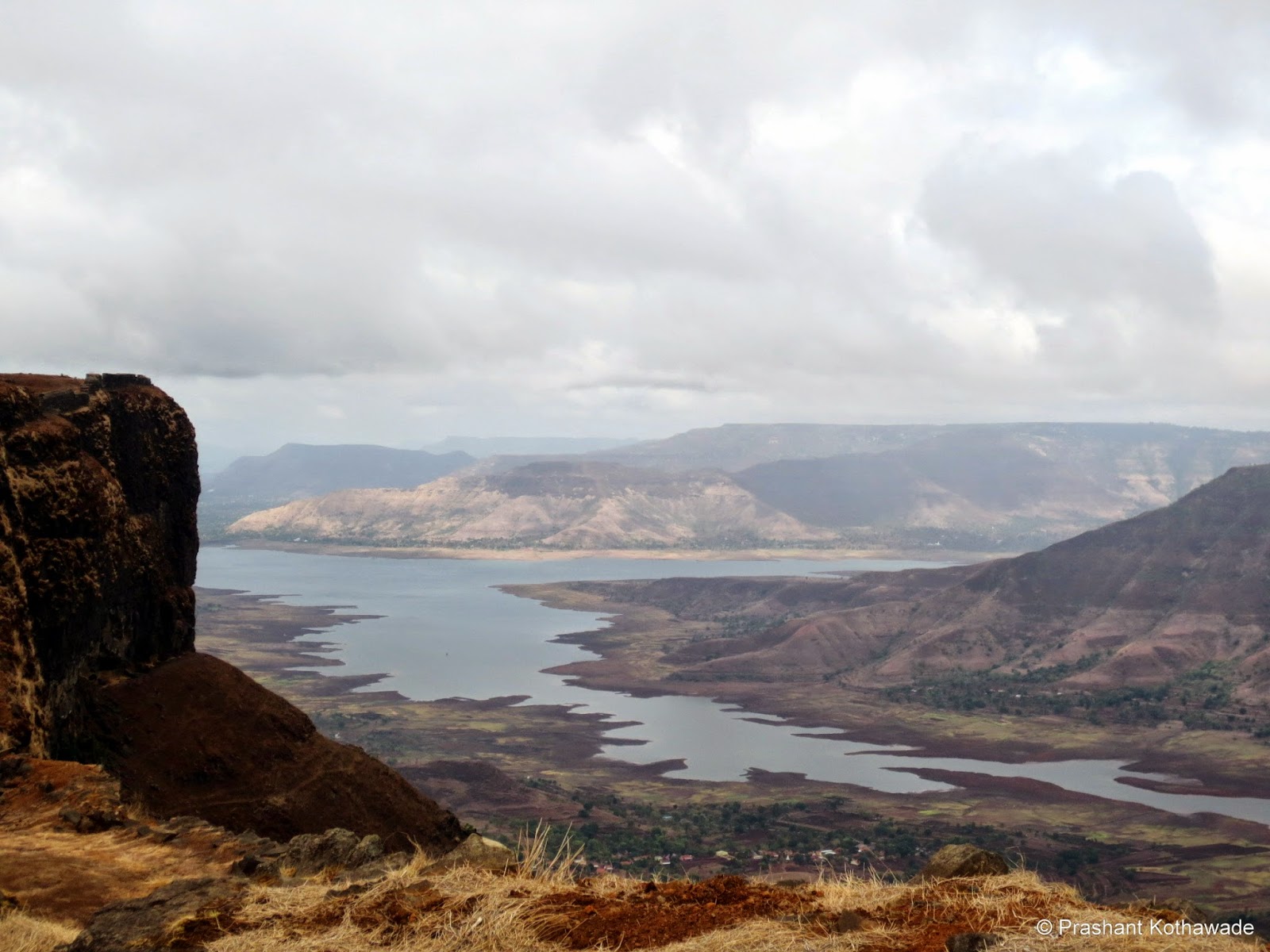 It was almost 1 pm and we were hungry. Rain had just stopped; clouds were hovering over Raireshwar; we couldn't have asked for the better setting to gorge on the delicious snacks particularly Cheese Sandwiches brought by Sandeepak. 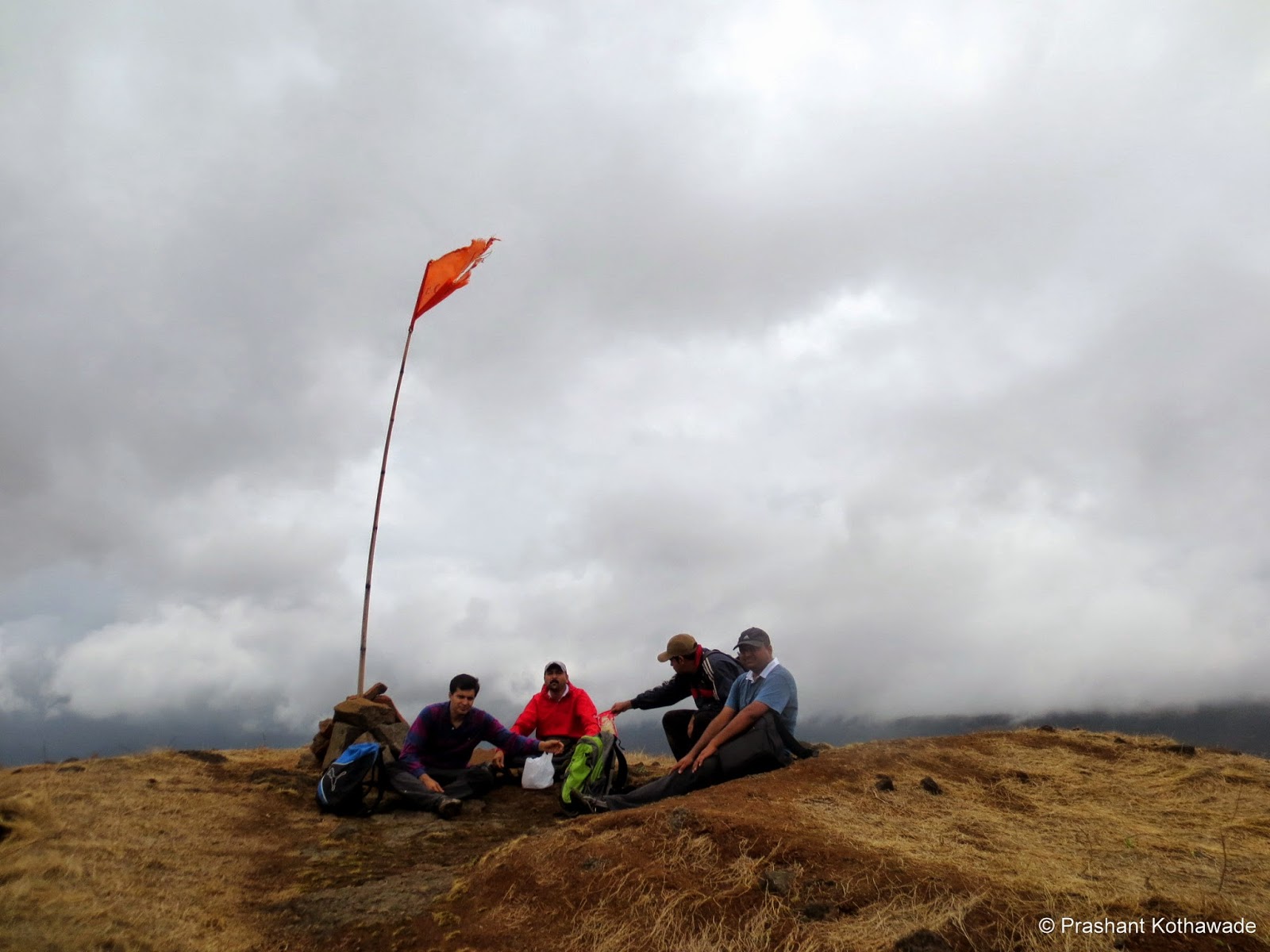 Soon, after exploration it was time to return. Vasu from the base village had already called once to check our time for return for lunch. After a short while, we reached to Kenjalmachi village. We again had the option to return from the same route from where we had climbed. But Amar and Chinmay had lost confidence on their shoes and didn't want to risk another fall from the steep descent. So we agreed to try the long winding Kuccha road and proceeded towards it. 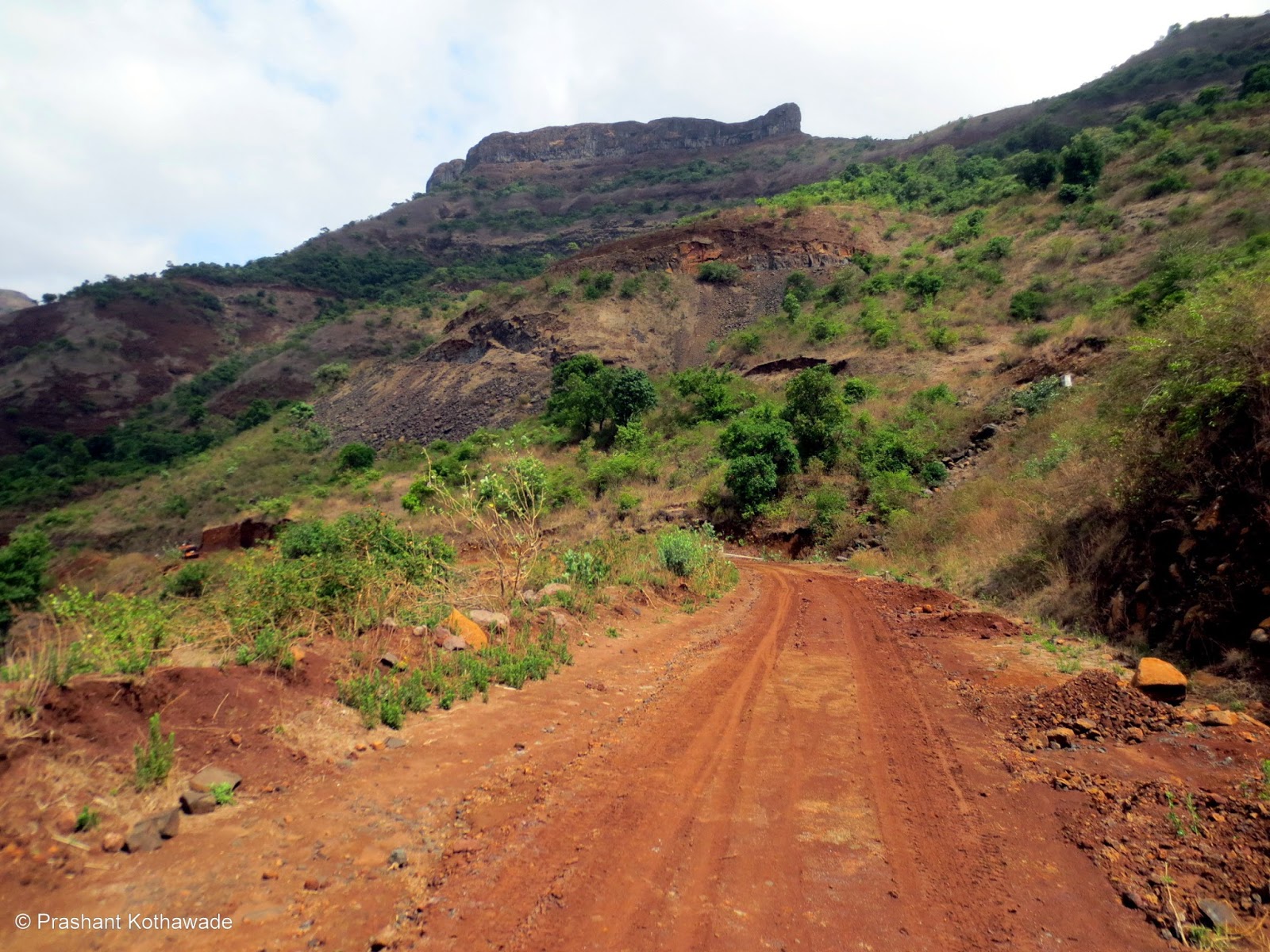 It was really a long route and at times, we descended through a short cut joining the winding route. It was fun! After trudging for more than 2 hours, we seemed to have reached to the base of the mountain from where we again had to go back to Korle village.

Few kids in the village were enjoying mangoes just plucked from the tree. A kid had already climbed on the tree and shook the tree to offer us few fresh mangoes directly from the tree. After tasting bitter-sweet mangoes, we were advised a short cut by the kids and we took it. It turned out to be a bad decision and soon, we reached to an altogether different village which consisted of only few houses. Most of the houses were deserted and we were slightly anxious. Fortunately, we spotted an old lady who provided us correct direction which was going through the fields. She even came for some distance to show us the correct route. 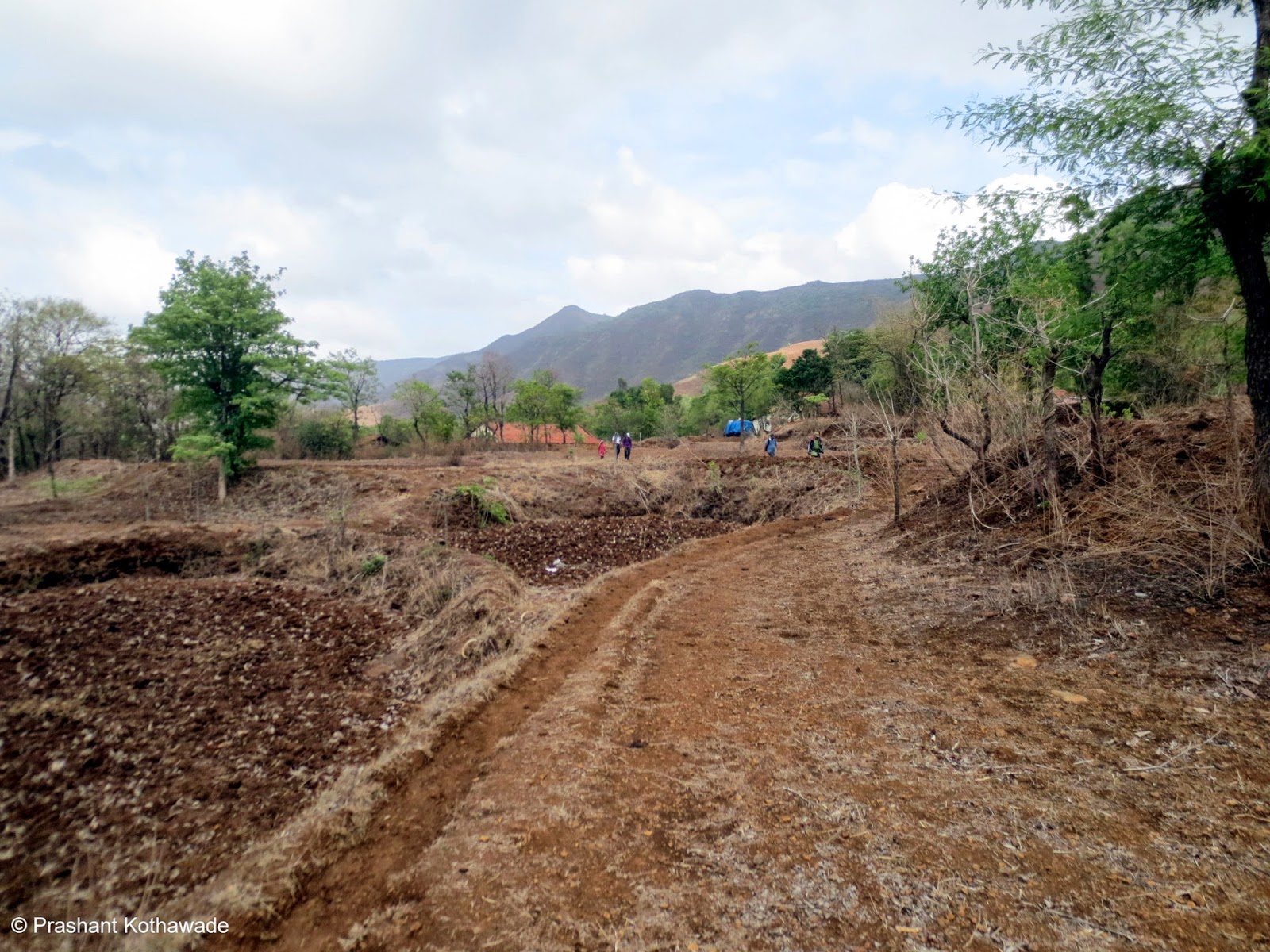 I would not have got this nice view of Kenjalgad had we not lost the route. 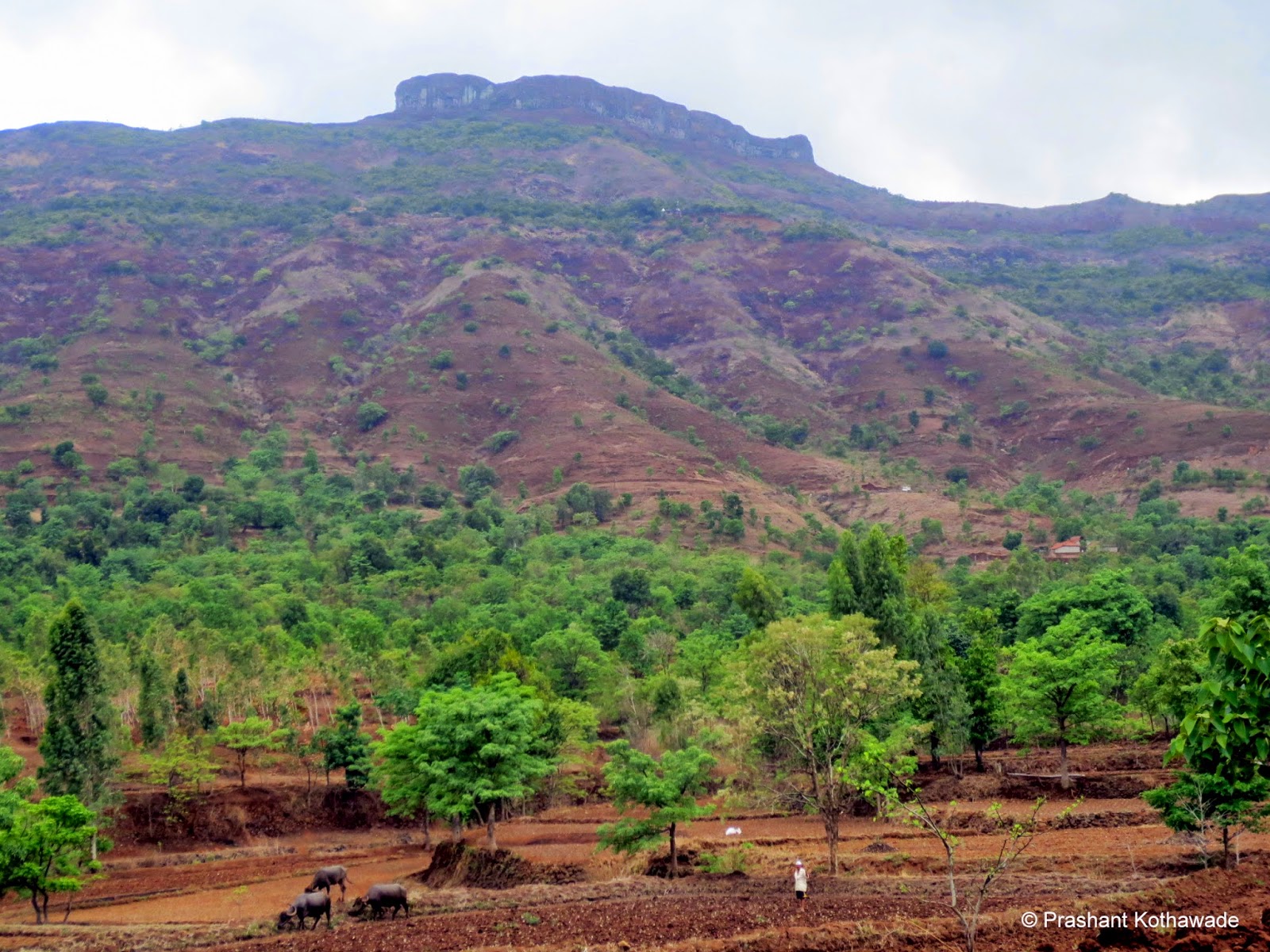 It was almost 4 pm when we reached to Vasu's house. We requested family to serve us lunch outside of the house and they readily obliged. Lunch was cold as it seemed to have been prepared few hours back though it was perfectly eatable.

House where we had lunch: 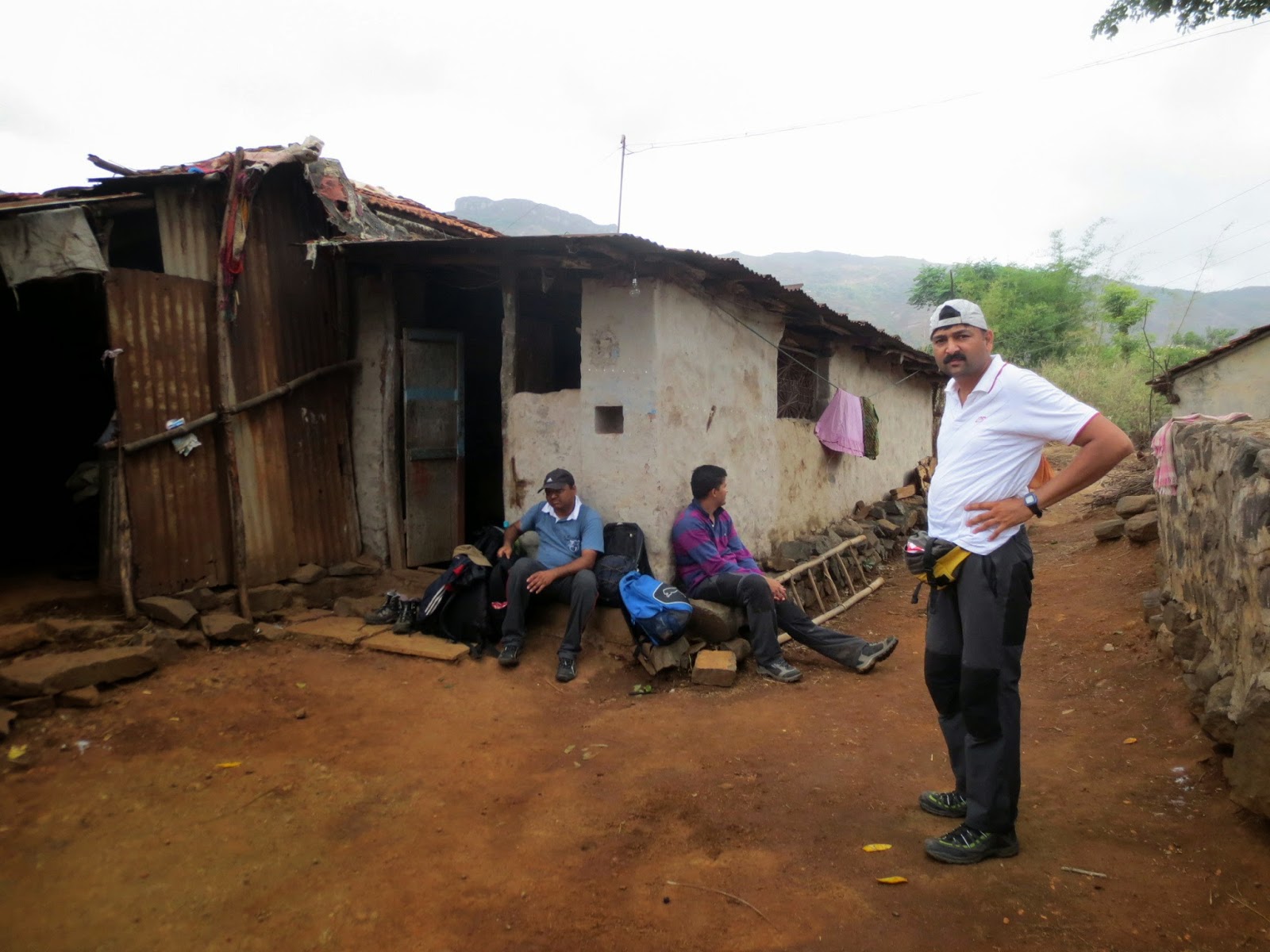 After finishing lunch, I along with Amar went to bring back the car and it suddenly started pouring for a while. Within 2 minutes, we were drenched and we ran; ran hard to cover ourselves in the comforts of the car. Rain seemed to remain predictably unpredictable and it receded within 5 minutes.

Soon, it was time to bid adieu to Korle village but not before witnessing the spellbound view of the rainbow. 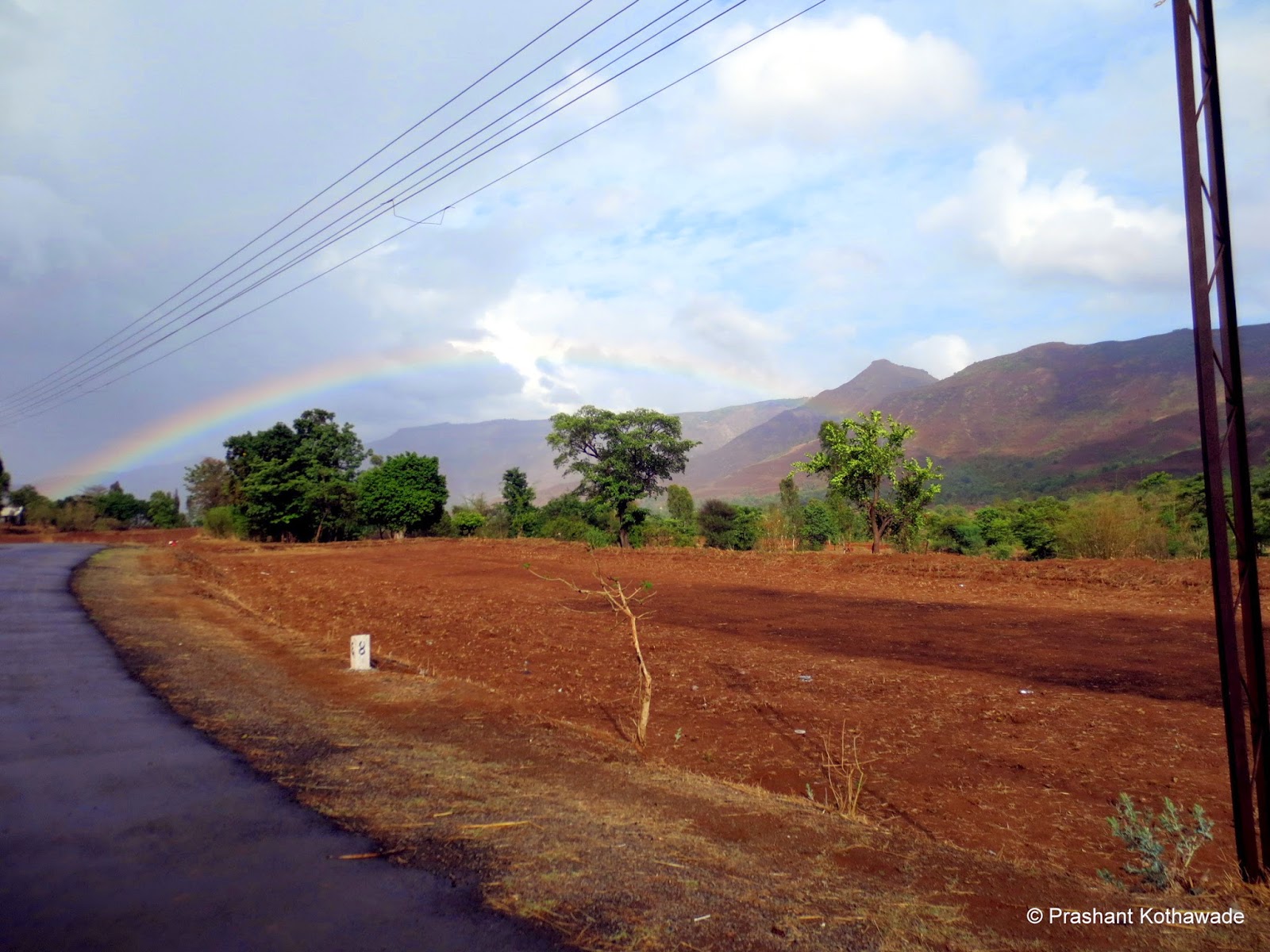 We stopped to Ambavade village to see Floating Bridge and Nageshwar temple nestled among the dense trees. 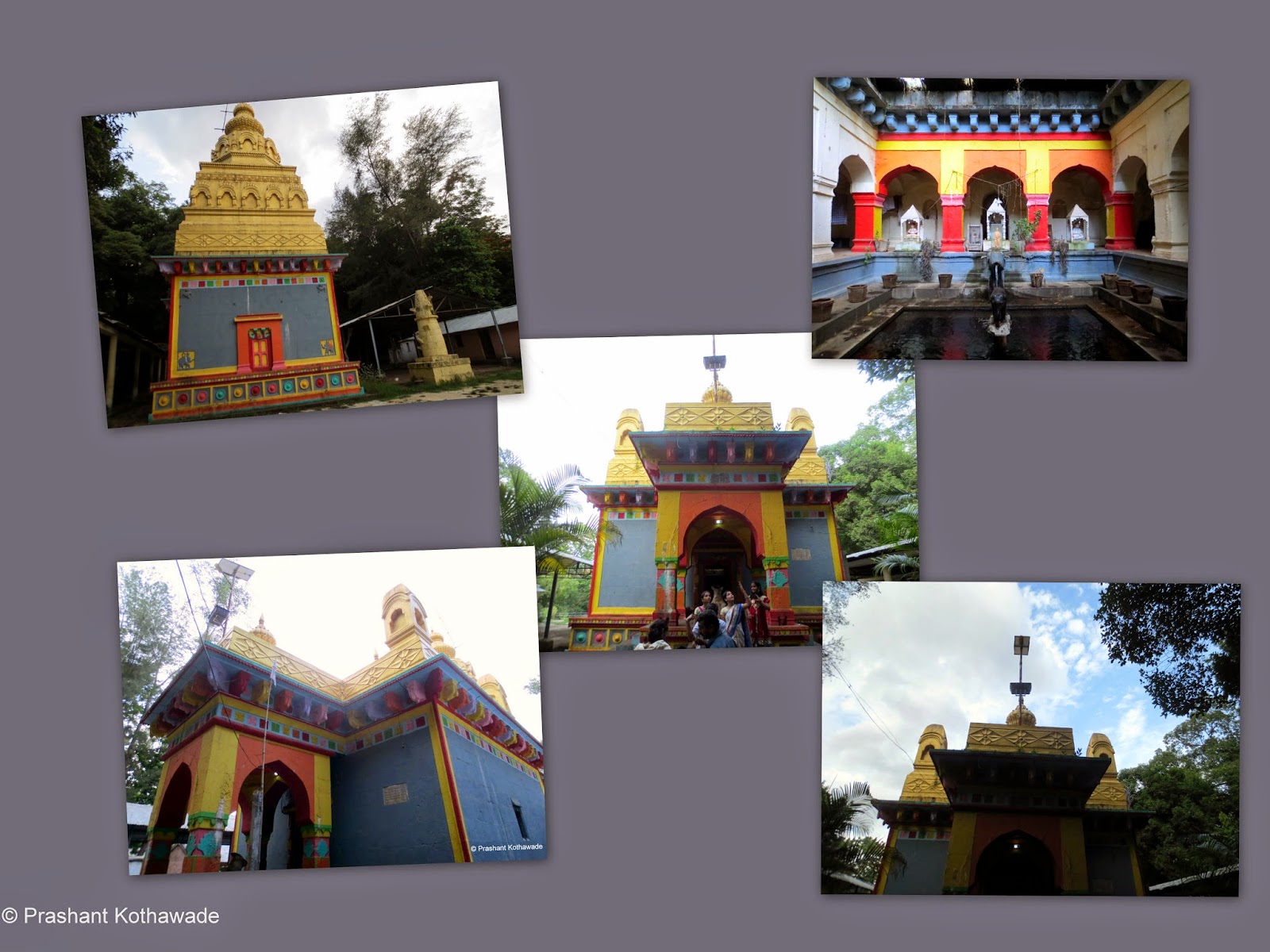 Finally, it was time to return after one of the remarkable days of the hiking.

Overall, it was a perfect start for the monsoon season. A lot of memories to savour! Last minute change in the plan to start hike from the distant village, shortcut with steep ascent, breathtaking view of massive cliffs of Kenjalgad, soothing view of Dhom Dam, rain playing hide and seek, Raireshwar engulfed in the clouds and a leisurely walk on the winding dirt road, taste of bitter-sweet mango directly plucked from the tree, losing our way after taking the short-cut and finally reaching to Korle village by an altogether different route made the whole hiking experience a very special one!

Though offbeat in nature, with very few remnants, Kenjalgad offers great panoramic views of Dhom dam and surrounding mountain ranges. Its massive,vertical scarp leaves an everlasting impression on your mind.

Tips for the hikers