Manikgad - A green escape near Panvel

Second week of July! It should have been raining everywhere but alas! Rain god had really taken the umbrage. Actually it began well in the month of June but then there was quite a bit of hiatus. Unpredictable weather increased the cases of cold, cough and fever and I was the victim of it. At the start of the week, I announced the plan of Manikgad hike on Saturday 10th Jul, 2015 to my trek mates but during the week, I developed the throat infection and even had to miss my office for Thursday and Friday.

Things were looking very difficult when I developed fever on Friday. My participation for this hike really looked difficult and I asked my trek mates to proceed without me. Tushar, my brother and trek mate took the leadership and made sure to call local contact and decide on the final plan. All plan was set perfectly; only hanging part was my participation. By evening, I started feeling better and decided to join my trek mates.

Everyone gathered at Tushar’s place around 5.30AM and we departed to Khopoli via Pune Mumbai expressway. Near Lonavala, there was torrential of downpour and all of us thought that finally we would be hiking in real monsoon. But as soon as reached Khopoli, rain abated. We took a left turn from Khopoli towards Adlabs Imagica. Our route was Khopili-Rasayani-Vadgaon. After enquiring and getting confused many times, finally we were on the right route towards Vadgaon. On the way, we crossed Pune-Mumbai expressway 3 times much to our surprise and confusion. In our opinion, we should have crossed expressway only once.

As most of the restaurants were closed in the wee hours of the morning, we kept on driving and reached very near to Vadgaon. As we still hadn’t breakfasted, we stopped at a small snack’s joint. As we didn’t have many options, we had to breakfast on Vada-Pav which was unexpectedly very tasty. Tea followed the breakfast and after felling satiated, we thanked the snacks vendor and proceeded towards Vadgaon.

After reaching to Vadgaon, we parked our car in front of a shop and enquired about Rahul Jambhulkar’s home. Immediately, a person came with us to show us Rahul’s home and Rahul came out of his home to greet us. Rahul was very polite and offered us water and provided us with the guide.

Ram was our guide’s name and we started our hike with him. Though we all were wearing comfortable shoes, Ram was hiking with his old slippers. Not to mention, he was super-fast and we had to shout to make him stop as we were lagging behind because of photography.


Some spells of rains had really done wonders to Mother Nature and whole lush green carpet as far as eyes could reach was looking very soothing to the eyes. We were ecstatic to see the quintessential rainy sights - puddles in the fields, recently manured fields; cattle grazing without care of the world and overcast skies. On top of that, Manikgad stomped its presence by towering above the nearer hills. 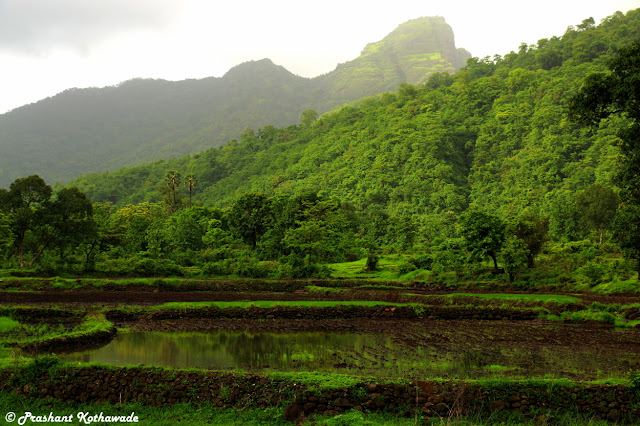 You need to climb a hill and walk on a flat terrain for about an hour to reach to the base of Manikgad. There are two routes available to reach to the top; one route is a short-cut but a difficult one and not often visited by trekkers. Other route is a long cut but a simple one but frequented by many trekkers. We had kept both the options open.

Hill climb also has some misleading paths. Some times you feel that you are going away from the direction of the fort. So having the local with you is a big help. After a climb of about 15 minutes, we took our first break near the rock where steps were cut for making the climb easier. Though the sky was overcast with no bright sun rays and climb was through the trees, there was a lot of humidity in the air; quintessential Konkan weather. We were relieved when we reached to the plateau and fresh and soothing breeze invigorated us. 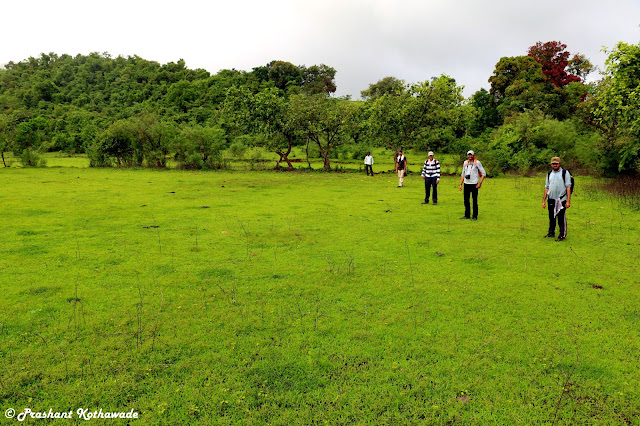 We perched under a tree; gulped some water; marveled at the thumb Shaped Karnala pinnacle reminiscing our trek to it few months back; saw a local couple who were heading towards their plant for local made brew.

Flocks of butterflies were fluttering on the small flowers on a single bush. There were so many of them; probably it was a breeding season and butterflies of myriad colors made us wait a bit longer around the bush and we got few wonderful snaps. 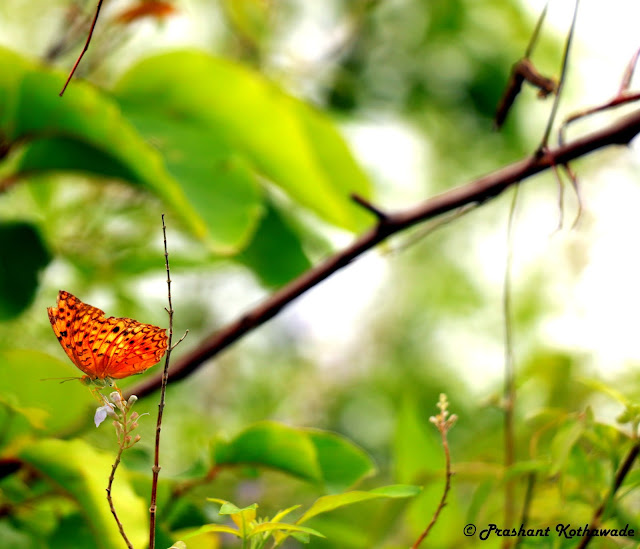 Trail was distinct and soon we reached to a place where we had option to choose the route. Ajay was slipping frequently and after taking his buy-in, we proceeded towards the short-cut which we were told was not as easy as the other route.

Gradually, we entered the forest once again. There were many interesting patterns formed due to interweaving of tree roots. 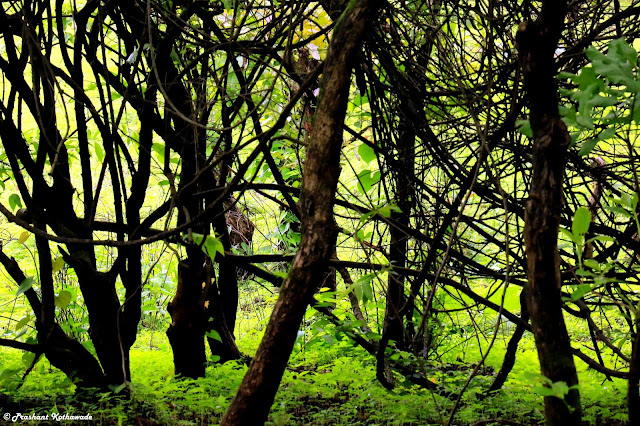 We soon came out in the open where we had the close look of the mighty fort; standing majestically tall; looking impregnable with the high, vertical ramparts. It was a sight to behold. 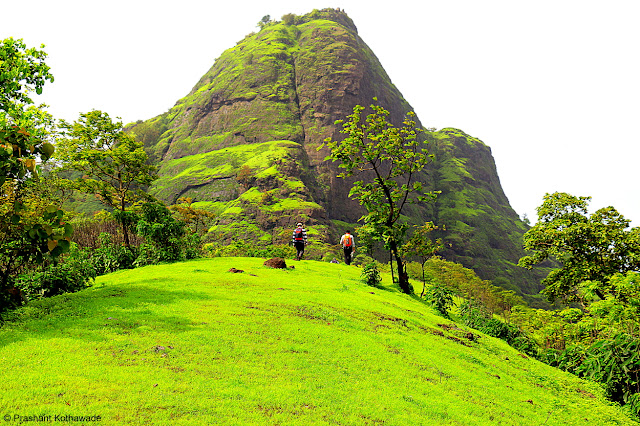 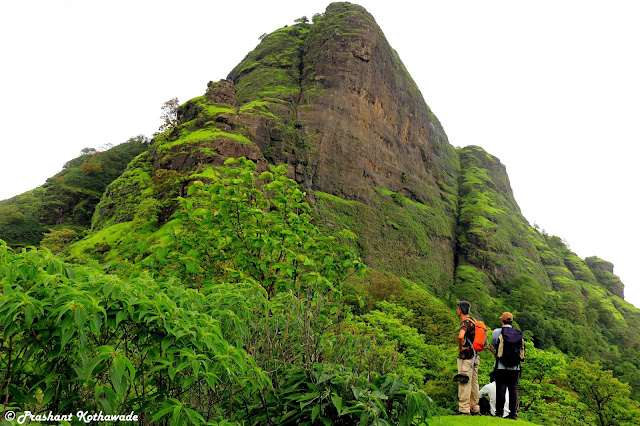 Sandeepak, Ajay and I, three of us were strolling slowly soaking In all the majestic vista around and we joined Tushar, Chinmay and Ram who were waiting for us at the base of the fort. Tushar showed us the shortcut and it made the head reel. “Man, how are you supposed to climb it without any technical gear and expertize?”
“It may not be as difficult as it looks. Let’s go as far as we feel it is easy. If anyone finds it difficult, we will turn back” it was my assurance to the team and we went ahead.

First traverse was thrilling with valley on one side and narrow path to walk onto. With similar experiences of earlier hikes, we negotiated it safely but very cautiously. 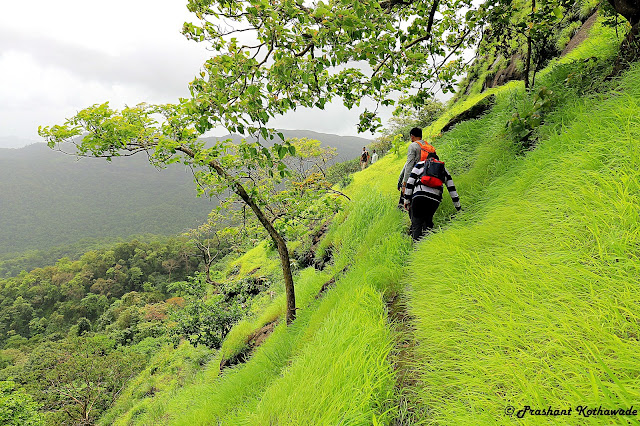 As we entered the gorge, it started pouring heavily. There was absolutely no shelter and we had to bear the brunt of rain lashing us. I had to cover my camera with rain cover and we slowly started our ascent through the gorge full of rocks. At times, we had to help and guide each other to avoid anyone from slipping. Only once Sandeepak made a large boulder to roll down but luckily it stopped automatically before hurting anybody. 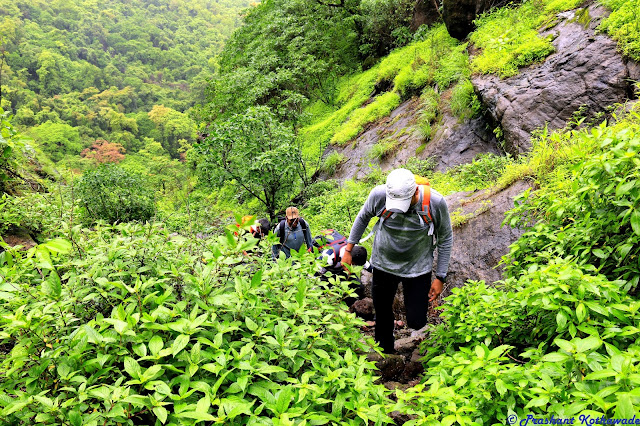 Slowly and steadily, we negotiated thrilling patch and feeling of utmost satisfaction was palpable on everyone’s face.

Nice sky with clouds welcomes us as we reached on top of the fort. It was hard to imagine that it was raining so hard just a while ago. We marched to the uppermost part of the fort. 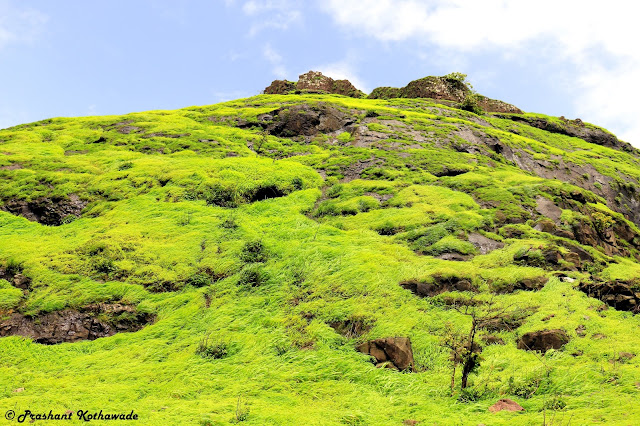 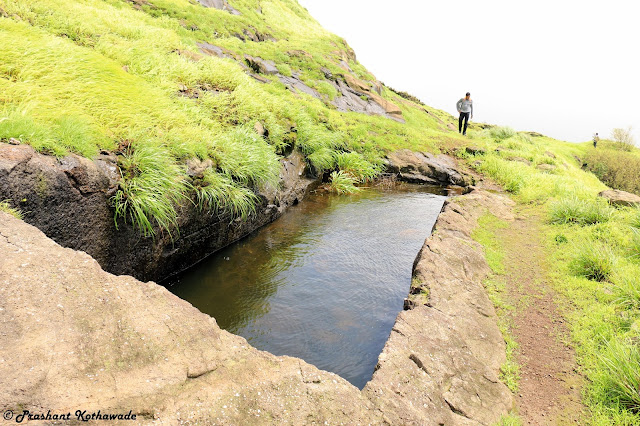 Remnants of the broken entrance: 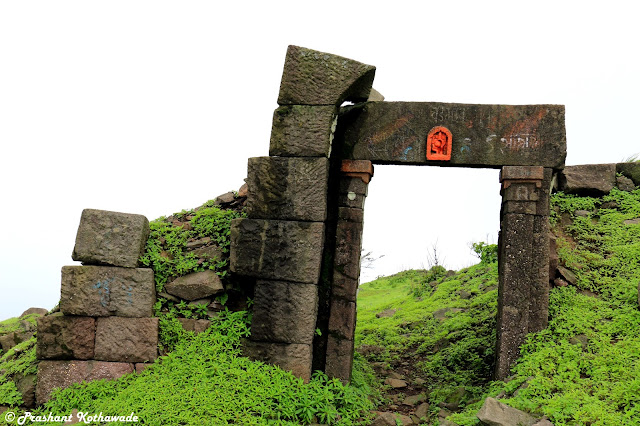 Water cistern on the western side of the fort: 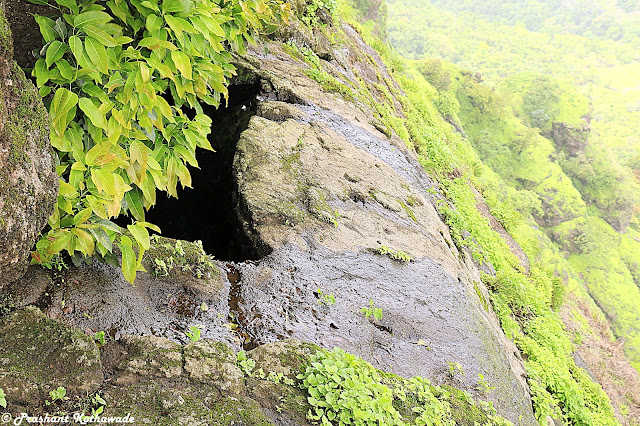 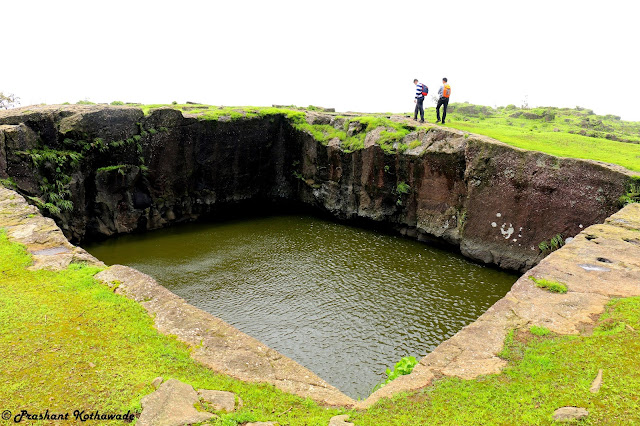 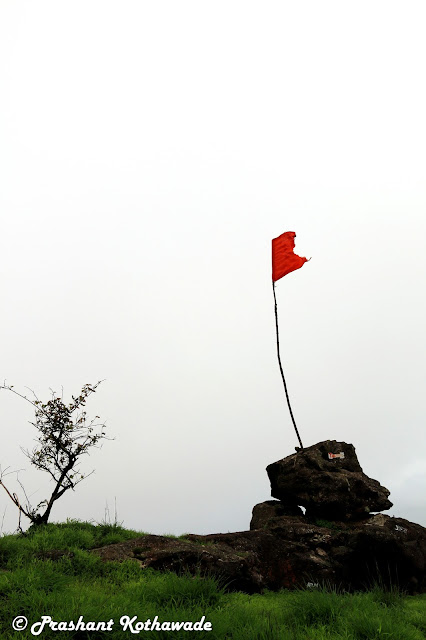 Temple in the open: 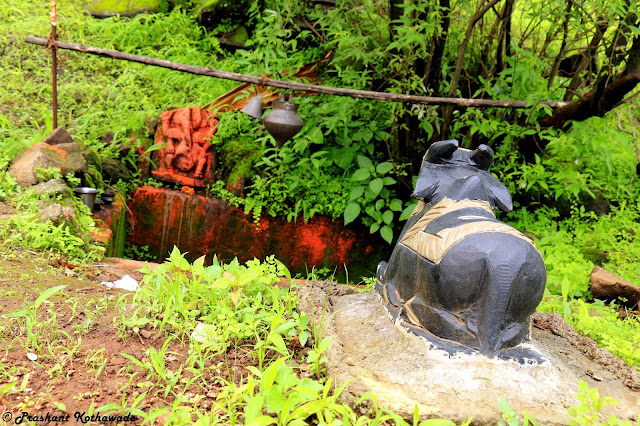 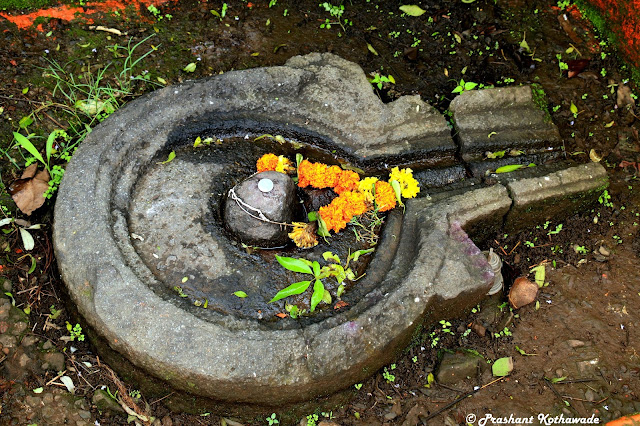 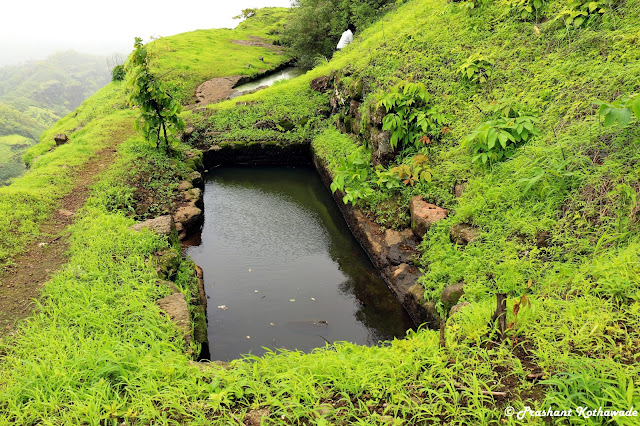 We decided to have lunch near the temple. As there was no shelter on the fort, we just perched on the grass and everyone brought out the food they have brought. 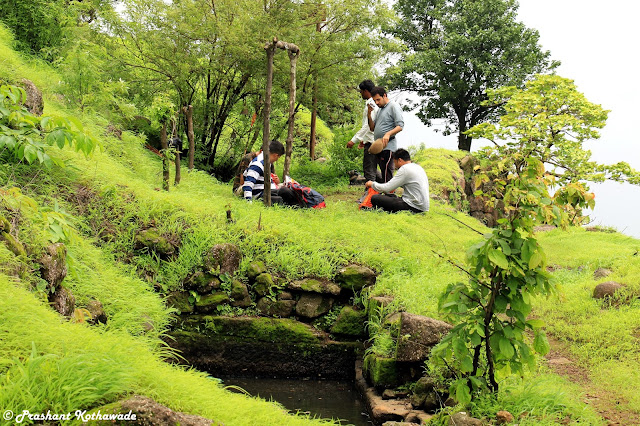 As we just started eating, another spell of rain hit us hard and we had to immediately cover the food with plastic. We were forced to stand up and have lunch in the rain. Rain really remained unpredictable and it made us look fool at times. It was funny though.

As we were having lunch, my friend and prominent trekker of Sahyadri Onkar Oak called me. He seemed very happy on the phone and conveyed the sweet news of him winning the second blogger award in Girimitra Sammelan. I was delighted to hear the news and equally delighted to hear the news of my other friend Sandeep Wadaskar winning the first award and my cousin Sanjay Amrutkar winning the third award. Onkar asked me to convey this news to both Sandeep and Nana as he was not able to reach them. With few whatsapp messages, news was conveyed to them. Meanwhile again rain stopped and we began descending via the longer route to make our exploration of the fort complete.

Longer route also went through a lot of thicket. 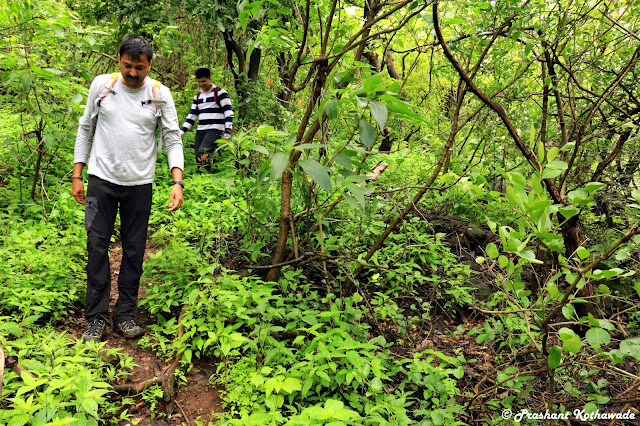 Rocks of varying shapes and sizes covered with moss posed lot of challenges. I slipped on them once or twice but with only minor bruises.

Sandeepak on one of the traverses: 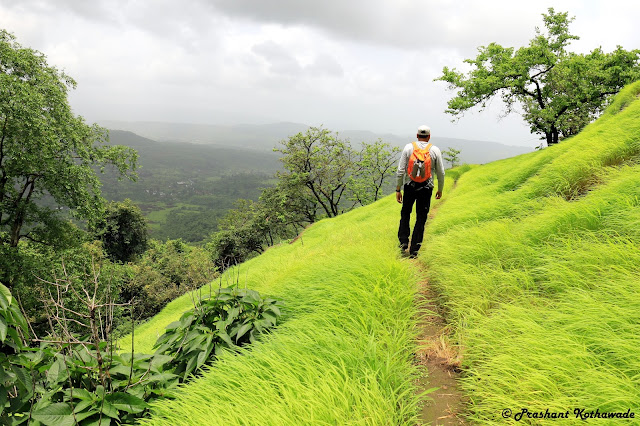 Ajay posing for the photo with Manikgad in the background: 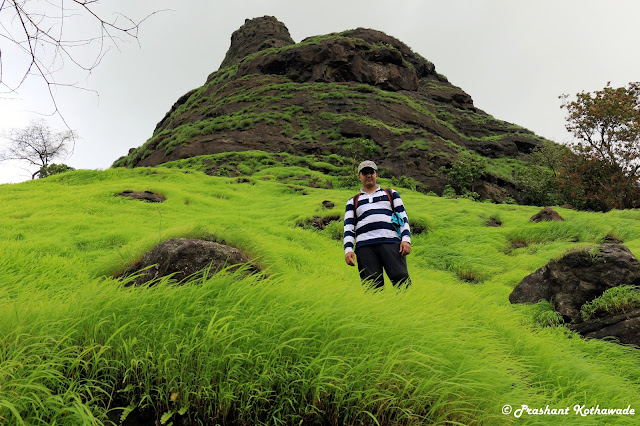 After walking for an hour, as we were trudging on the trail outside the forest, we heard shouts from the forest. We guessed that few trekkers must had lost in the forest. With a lot of shouting and with the help of Ram, our guide, the lost group was safely rescued from the forest. One of the members had hiked on Manikgad many years before and he insisted on not taking a guide and apparently had lost the way in the forest. This whole rescue efforts took almost an hour and we were just waiting for the group to join us safely. Before this lost group arrived, we spotted few local boys on the way to the fort and asked them to wait and help the other group to reach on top of fort safely. Once few of the members arrived and once we were confident that others would also be back safely, we again resumed walking.

Manikgad (left side pinnacle is called "Mankichi Lingi"). Group mentioned above was lost in the forest surrounding Manikgad. 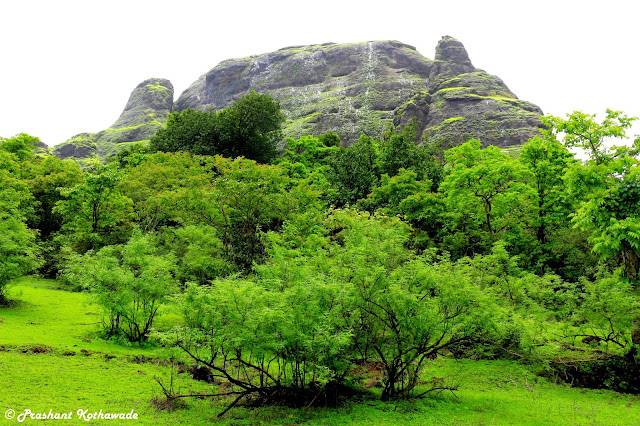 A dog followed me for some time and as I turned to take his photo, he got scared seeing the camera and ran away with full speed. Probably, he got scared to strange looking object in my hand. 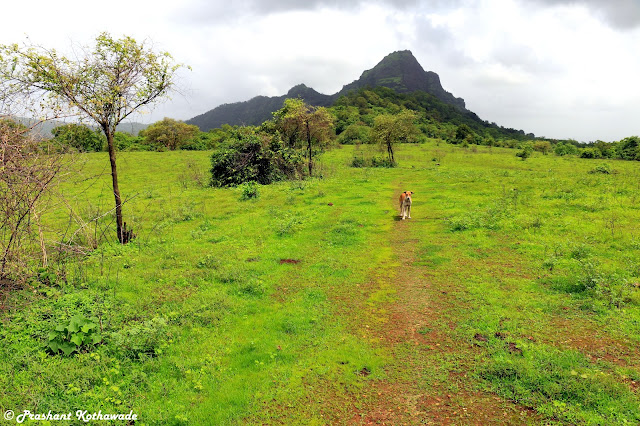 We again passed on the bush with many butterflies and again stopped to click few more snaps.

Soon, we reached to village. I was behind others and still clicking pictures. Finally we entered the village. As we had reached much before than anticipated, I strolled leisurely watching houses of some really bright colors. 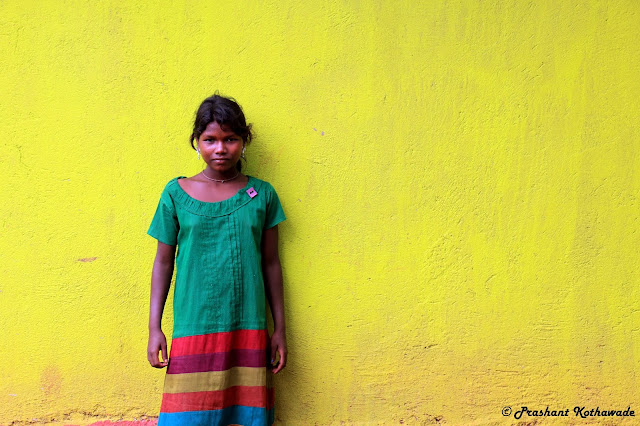 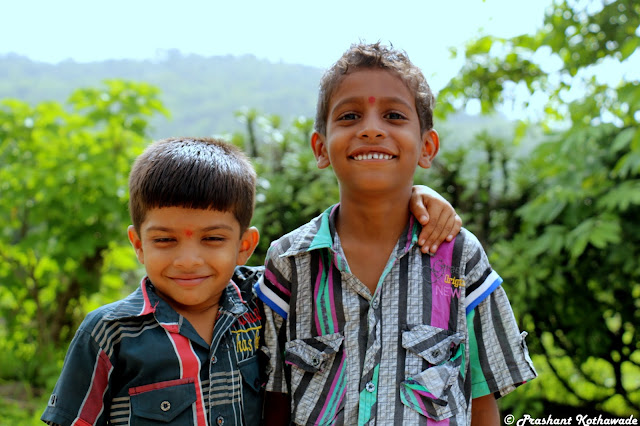 After reaching to Rahul’s house, we were given water to freshen ourselves. Hot tea was served later and we chatted with Rahul and his father and they proved to be perfect hosts. Their hospitality touched us a lot. Rahul came to see us off and we were soon off to Pune.

Finally, Manikgad which had remained elusive for a long time was conquered. It was truly a satisfying hike. Manikgad with its massiveness left really an indelible impressions on my mind. Thrilling short cut to reach on top provided some real adrenaline rush. Remnants on the forts transported us back to glorious history. Verdant carpets of grass provided some spectacular feast to the eyes. Truly a remarkable day of hike!

Tips for the trekkers: