A detached hill on the eastern side of Narayangaon on Pune-Nasik road holds your attention. At night, you can see a light flickering on top of this hill. This hill is nothing but Narayangad Fort.

Narayangad had remained elusive for a long time. I earlier had planned to hike on it along with Chavand and Hadsar but both times, I ended up hiking on Shivneri Fort. One reason was that during the earlier treks, I had trek-mates who hadn't visited Shivneri; so I ended up in taking them to Shivneri thus abandoning the plan to visit Narayangad.

This time, I had planned Narayangad hike along with Nimgiri Fort. After hiking on Nimgiri Fort, we had a heavy lunch at Junnar and it was almost past 3PM. There is slight hesitation in hiking on unknown fort. Lots of thoughts occupy the mind like “what will happen if you lose your way”, “what will happen if you cannot complete exploration of the fort before sunset”. This time too there was a hesitation. But seeing the positive attitude and determination of the fellow trekkers - Tushar Kothawade, Chinmay Kirtane, Amol Chandurkar and Sameer Kadam, we decided to march towards the fort.

After reaching to Junnar, we enquired and proceeded towards Khodad - a town famous for Giant Metrewave Radio Telescope (GMRT), the largest telescope at metre wavelengths in the world, which attracts radio astronomers from different countries.After about 15-20 minutes on the road to Khodad, we saw the board indicating the direction of Narayangad.

We were stopped by the hoard of sheep as we took left turn towards Narayangad. 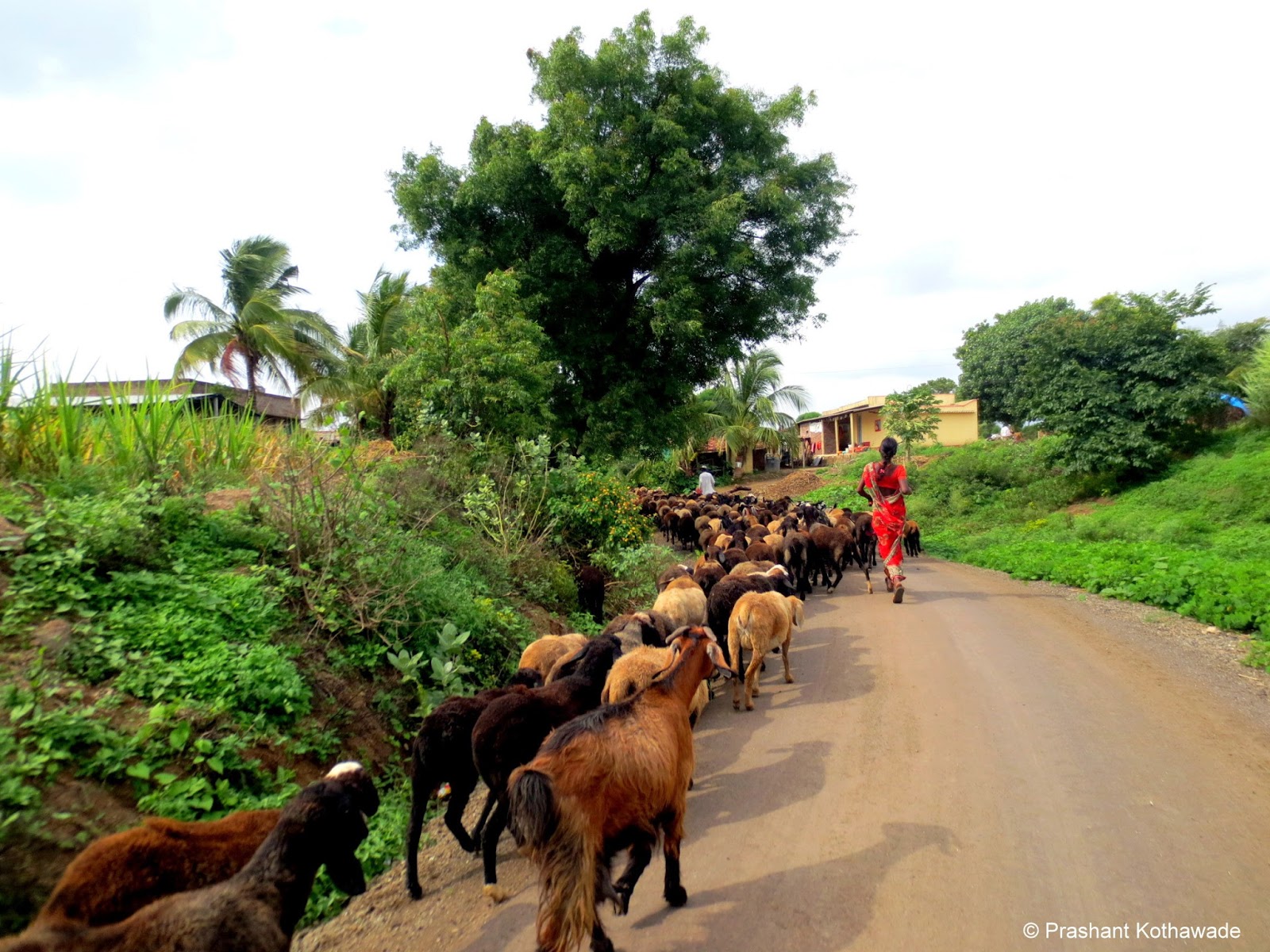 There was a surge of excitement once we had the full view of the fort spanning East-West. 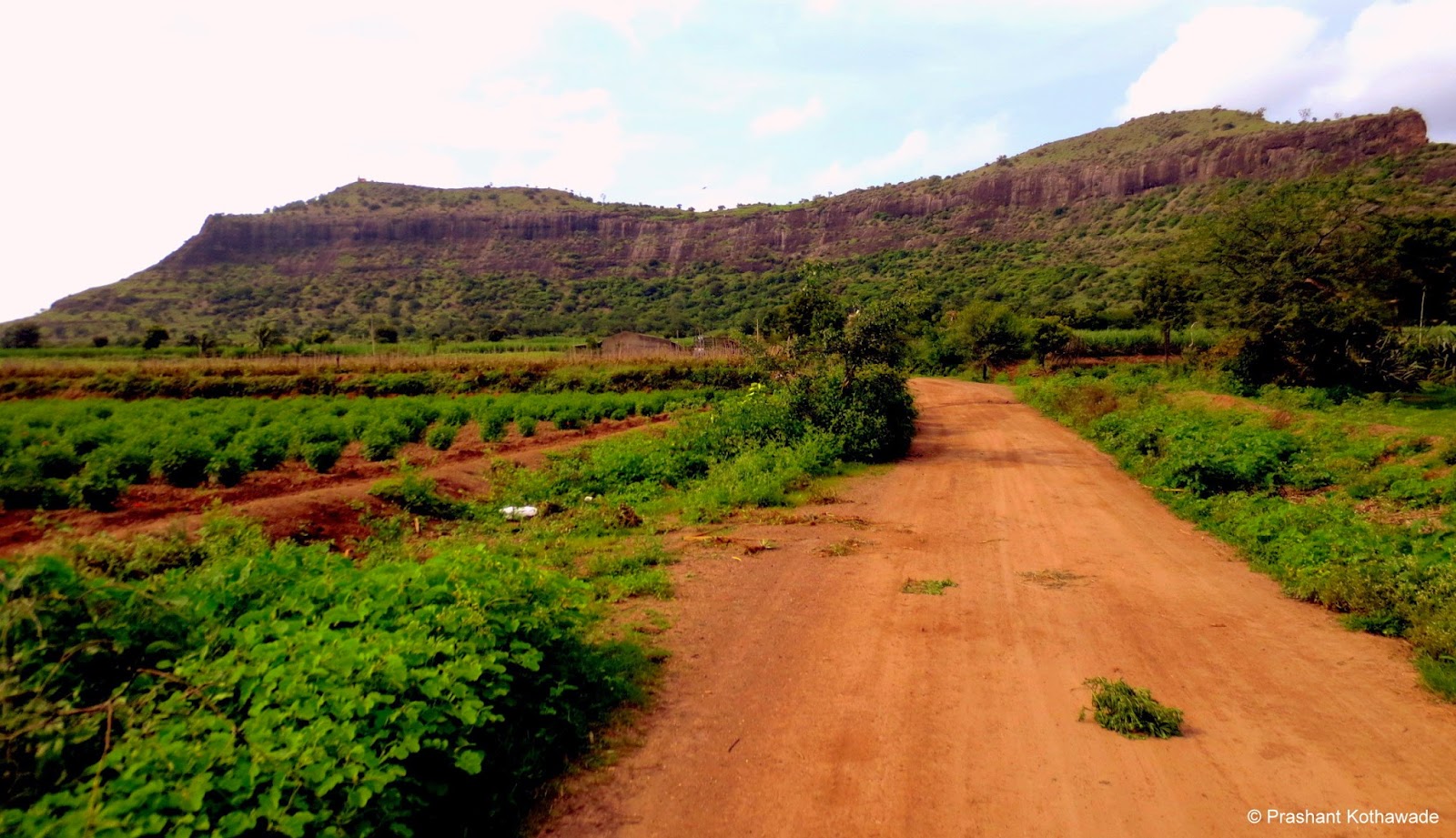 We were quite impressed with the rich fields on both sides of the road. 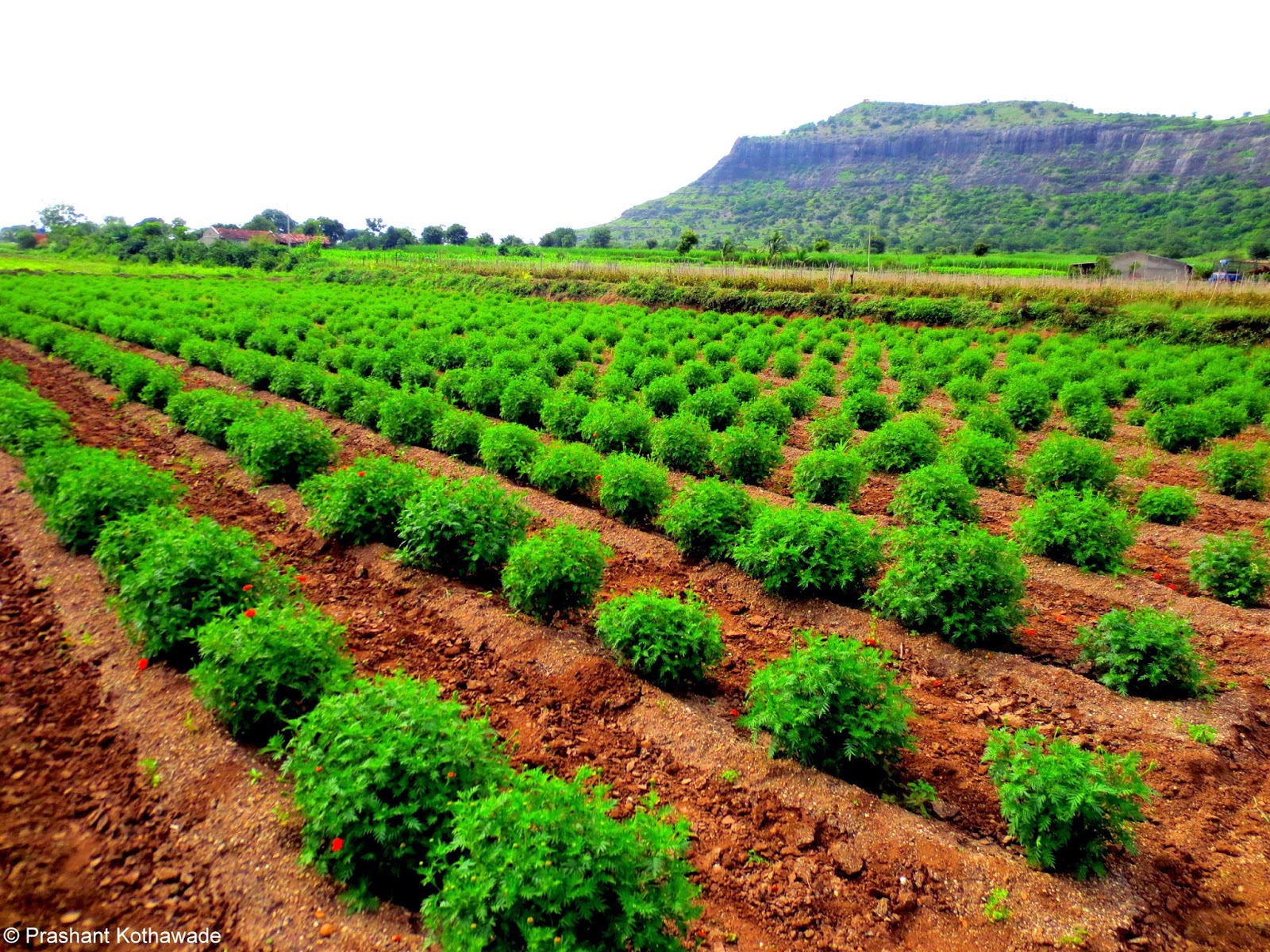 Soon, we reached to the base, parked the car in the premises of the temple of Muktai Goddess. Few local villagers were resting on the benches and we inquired about the route which seemed pretty straight forward. 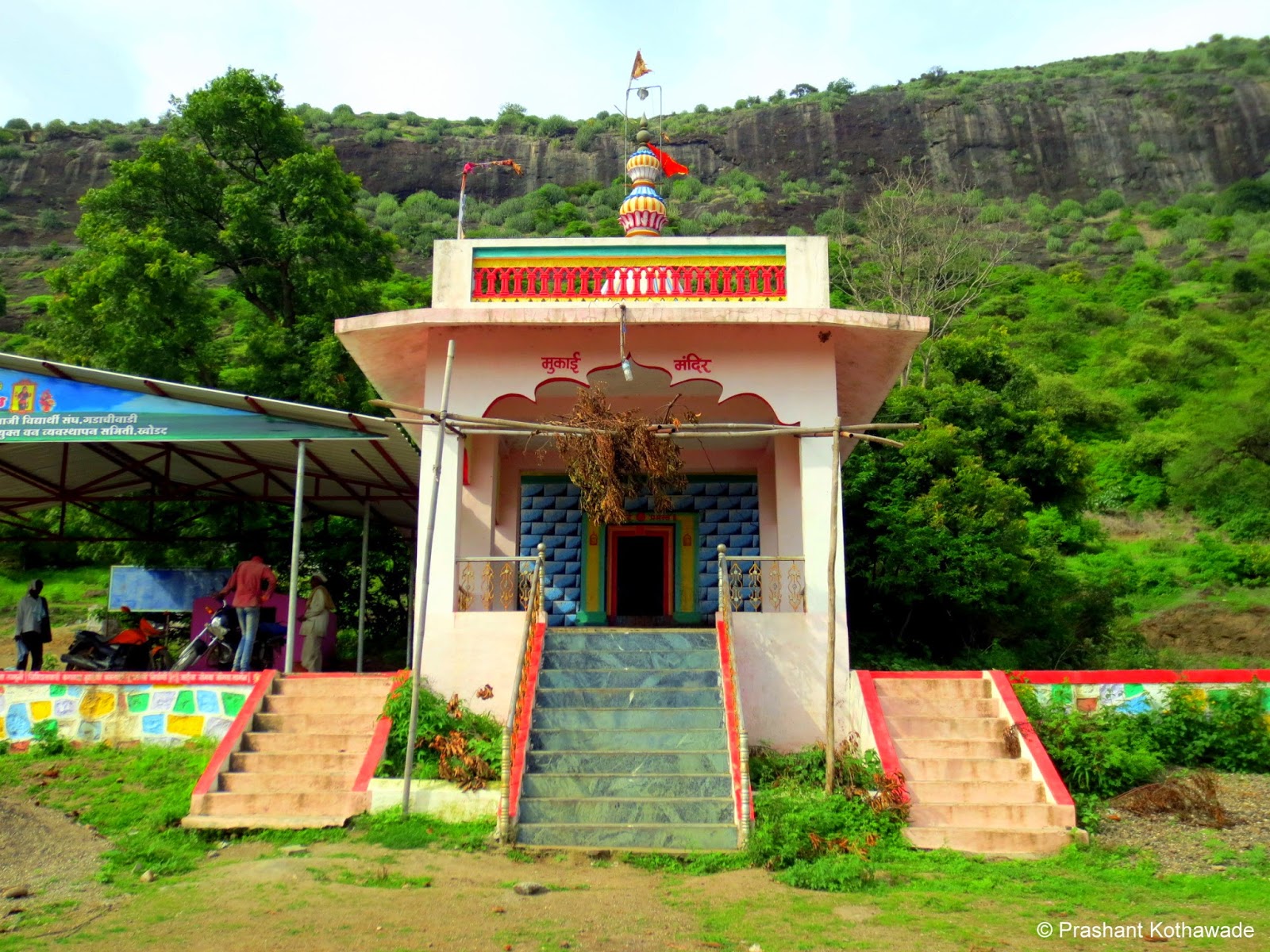 There was a tinge appointment to see the ongoing work of constructing the concrete steps which meant altering the older type of construction but on the other side, we felt happy to see something was being done to maintain and make the fort accessible to all the common people. 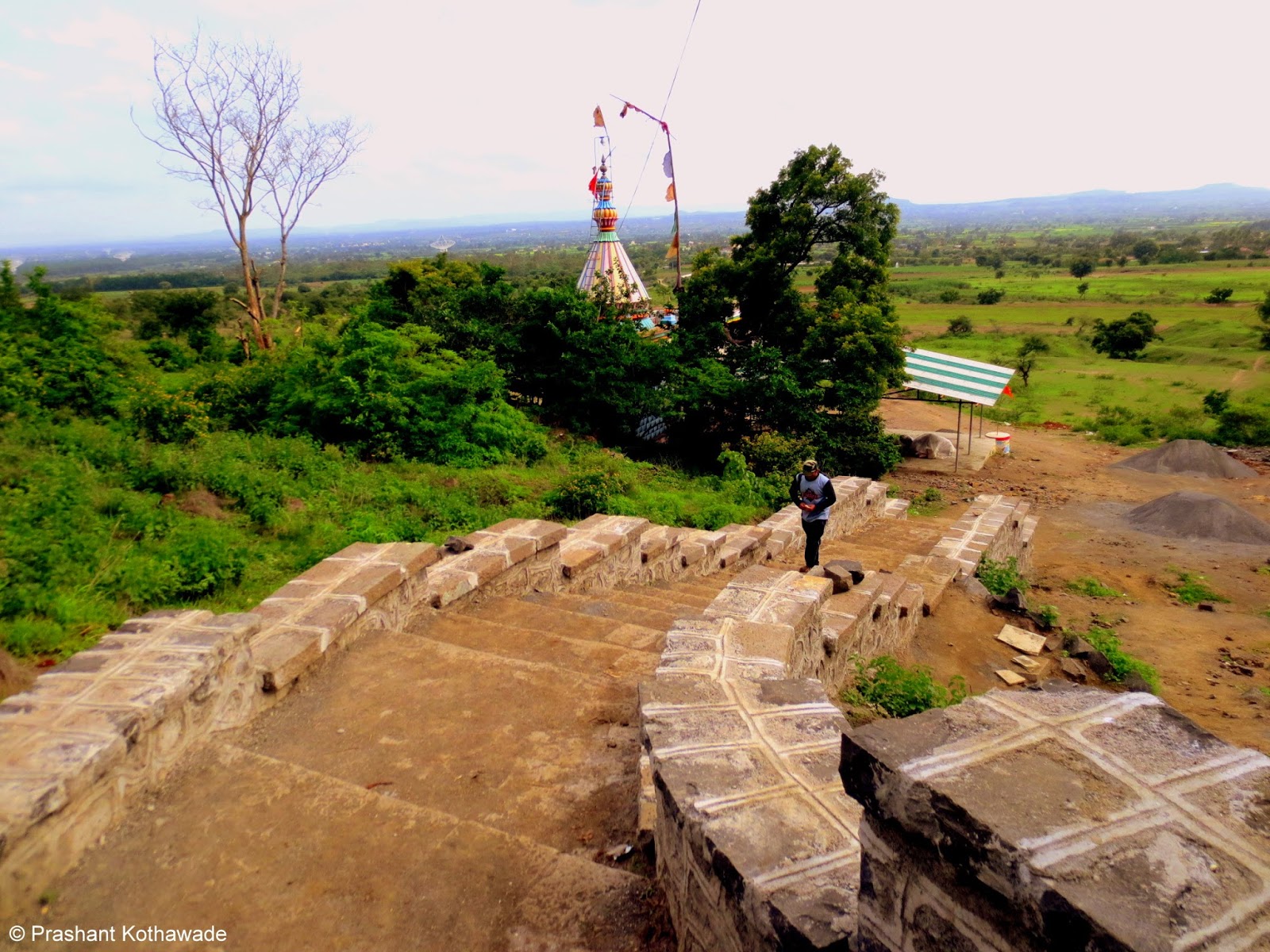 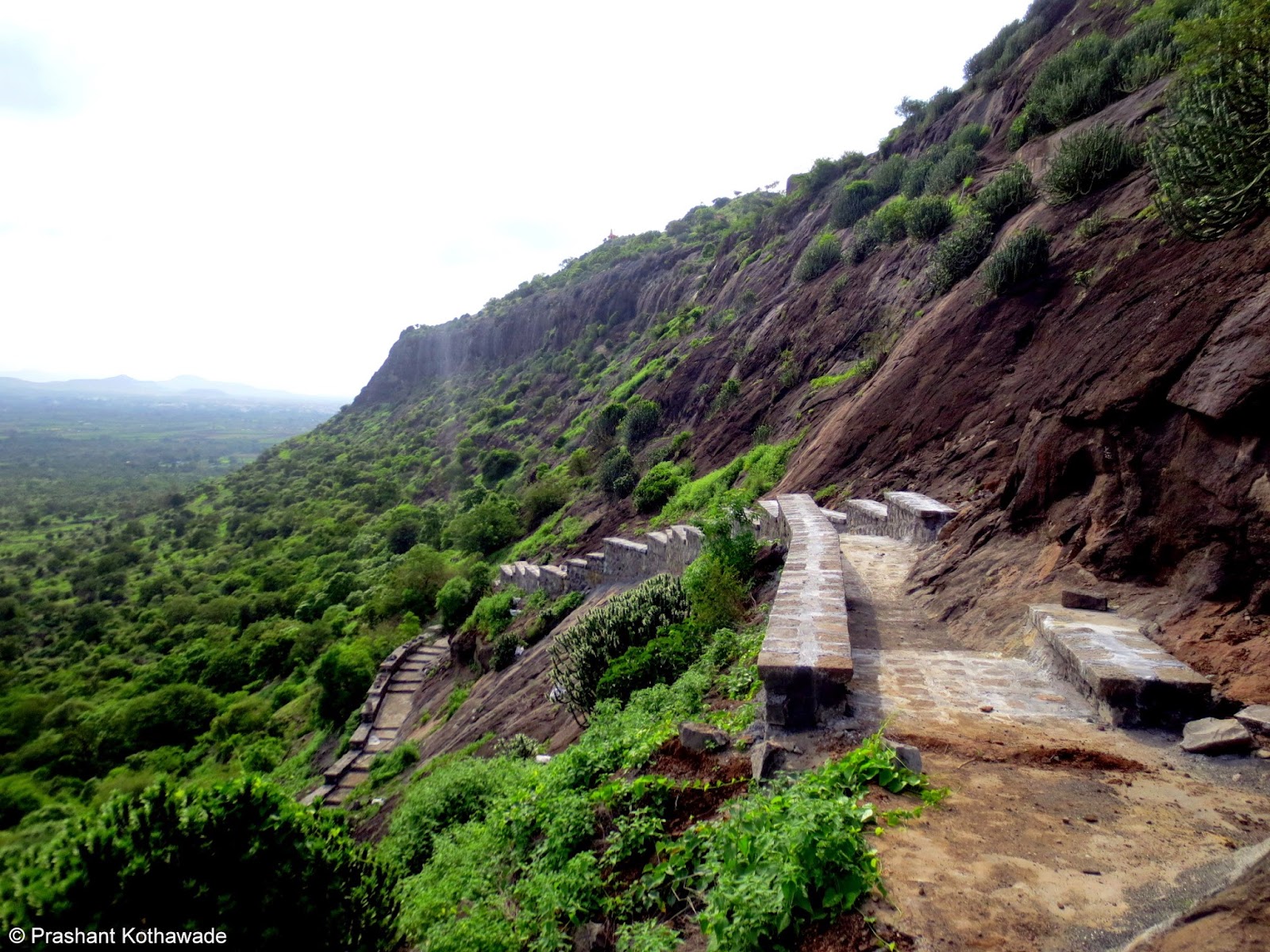 Soon, we reached to top of the fort and temple on the top was the only and obvious structure on the fort and our steps automatically proceeded towards it.

View after reaching to the top: GMRT Telescopes in the background. Also, you can see the beautiful road coming to the base of the fort with beautiful green fields on its both sides. 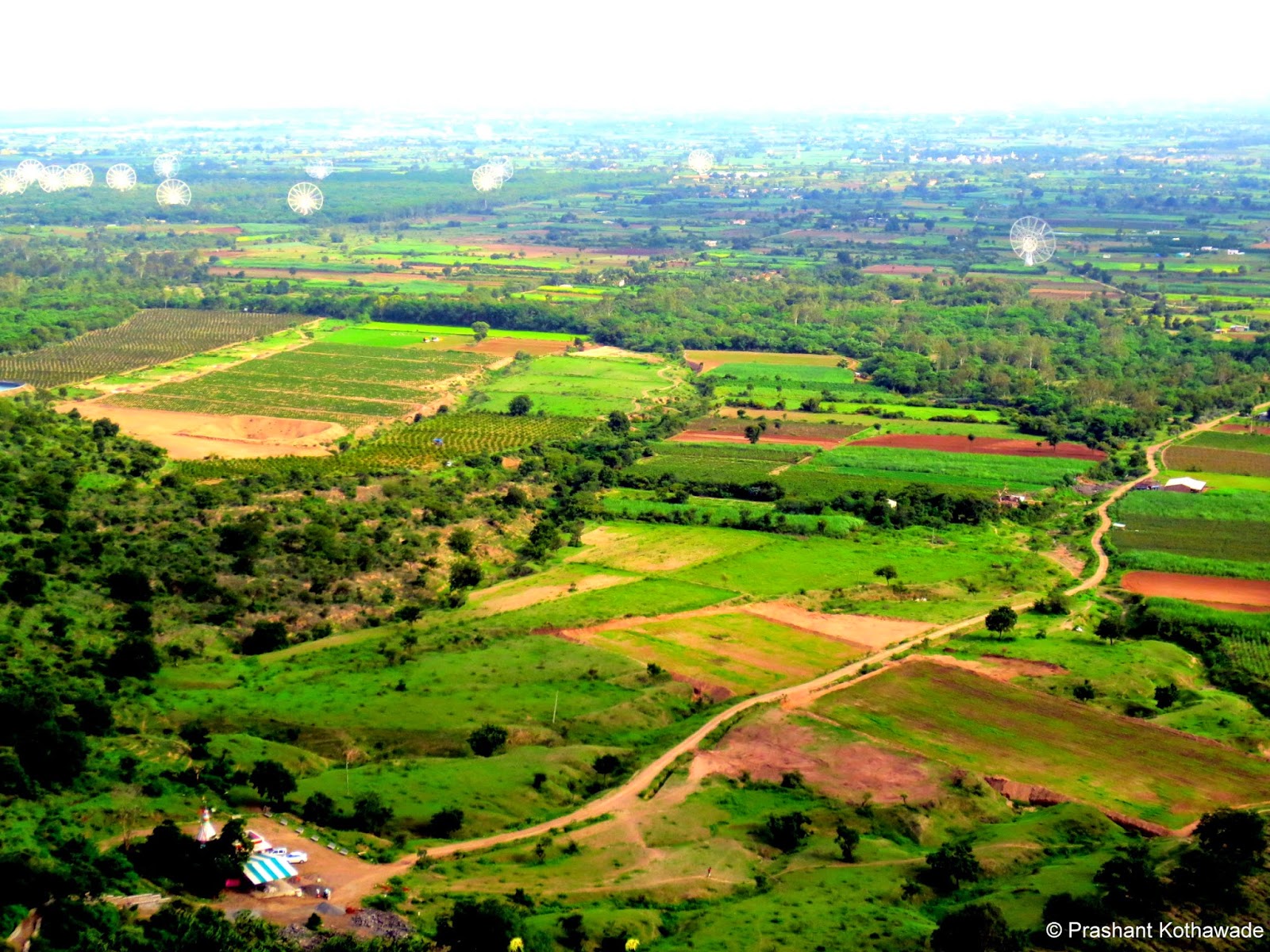 Path leading to Hastamata Temple on the fort: 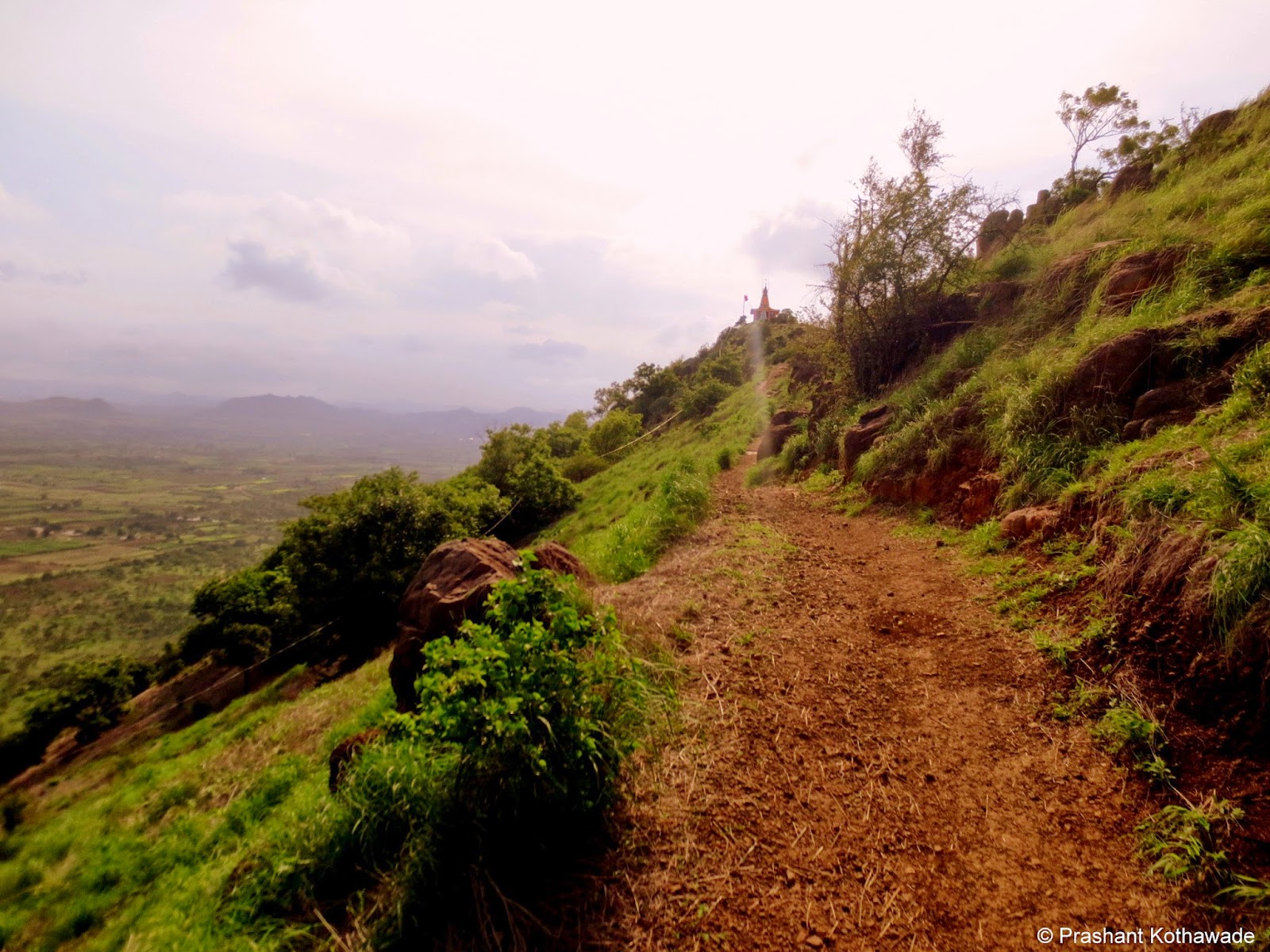 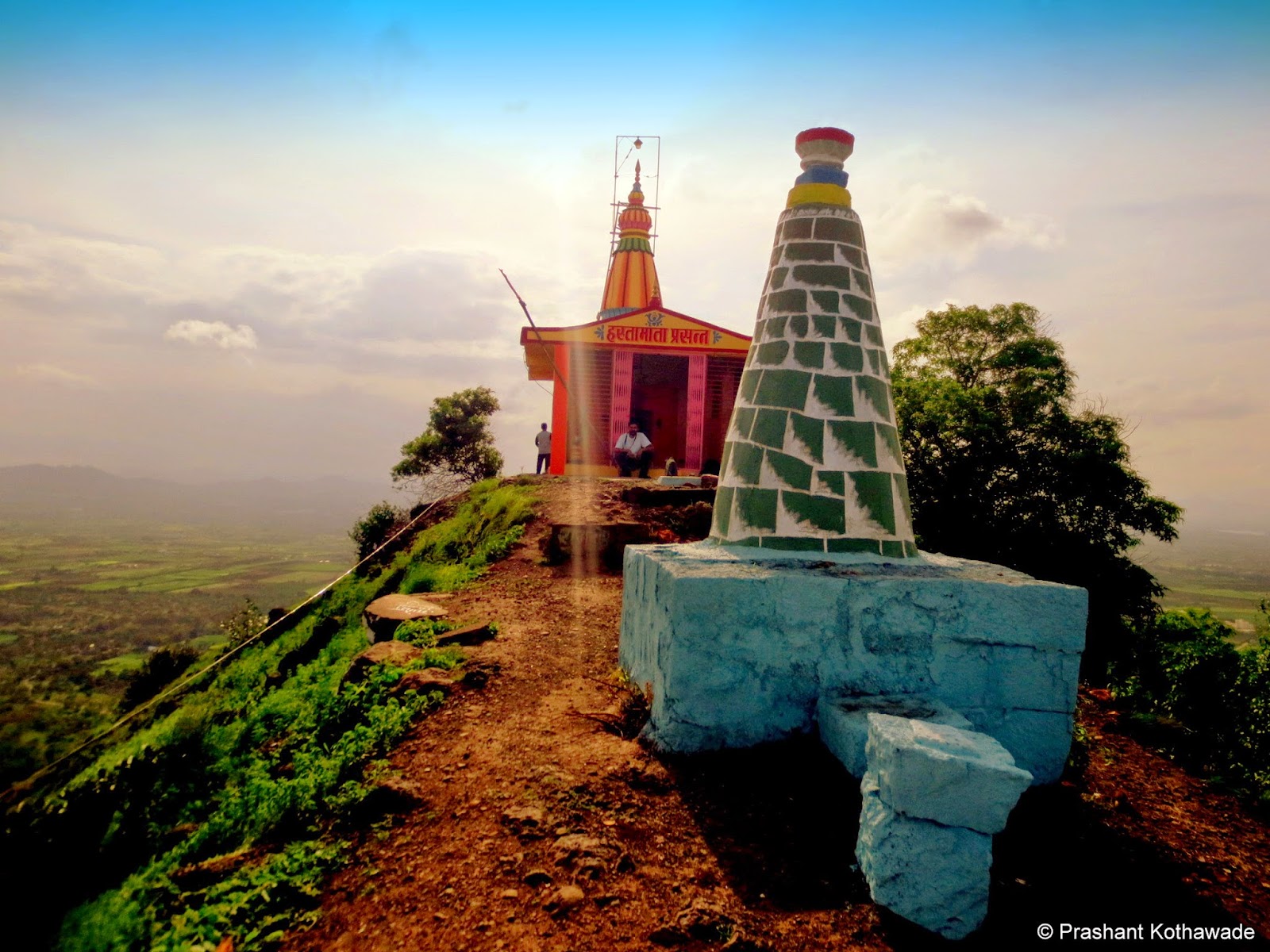 Cold wind caressing our faces rejuvenated us instantly and we spent a lot of time just relaxing in front of the temple. 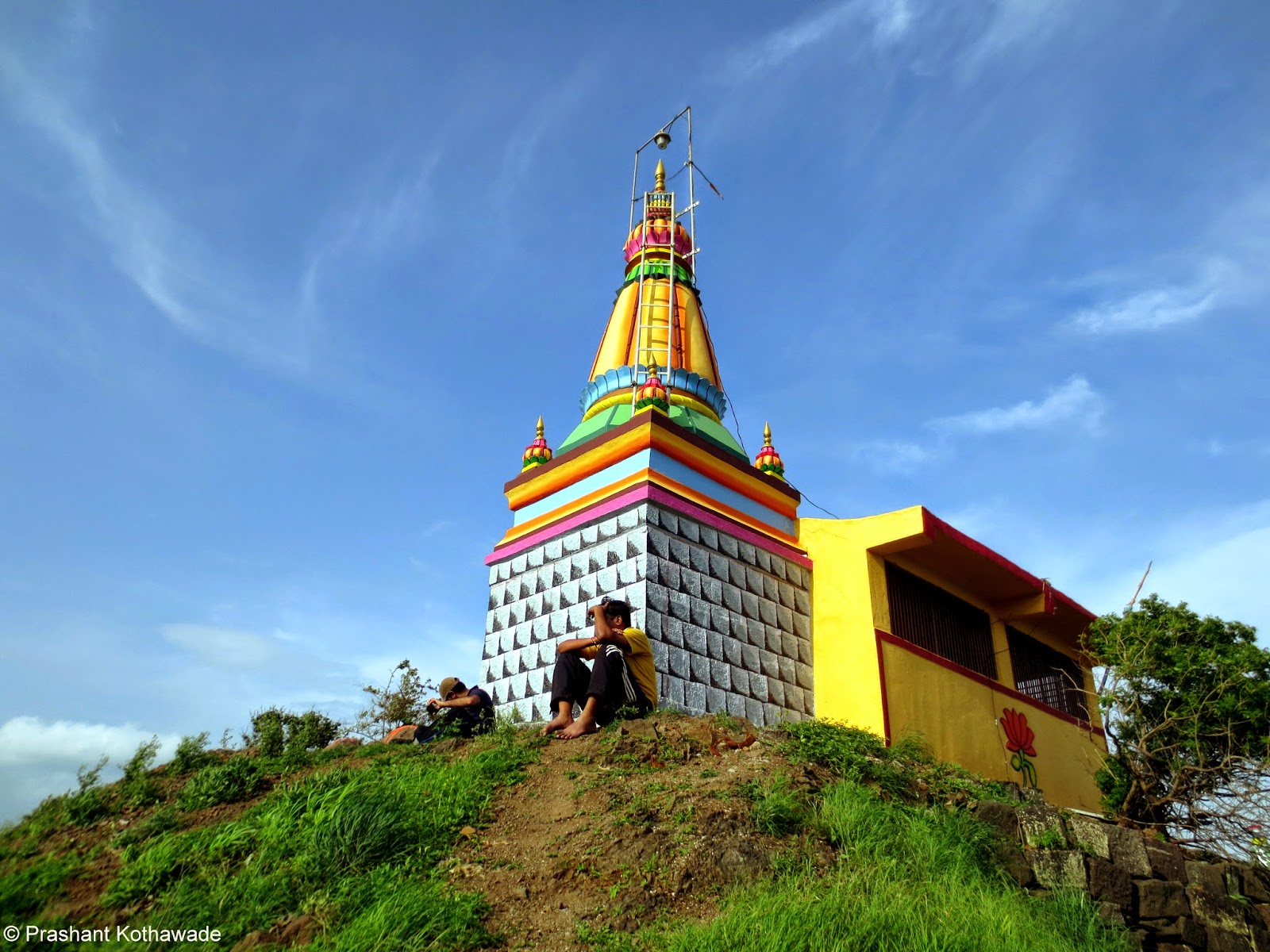 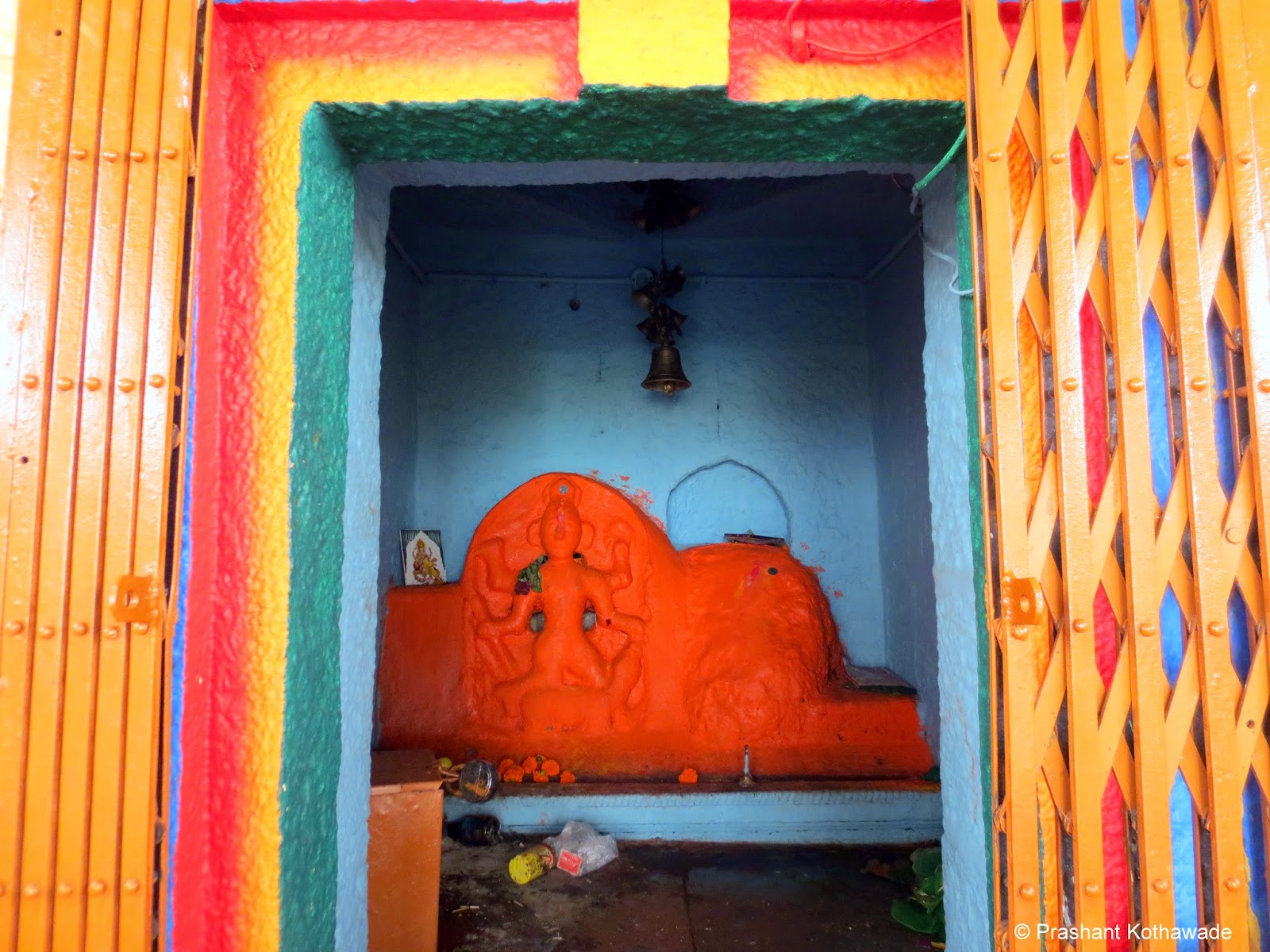 Landscape on the Western Side as seen from the temple: 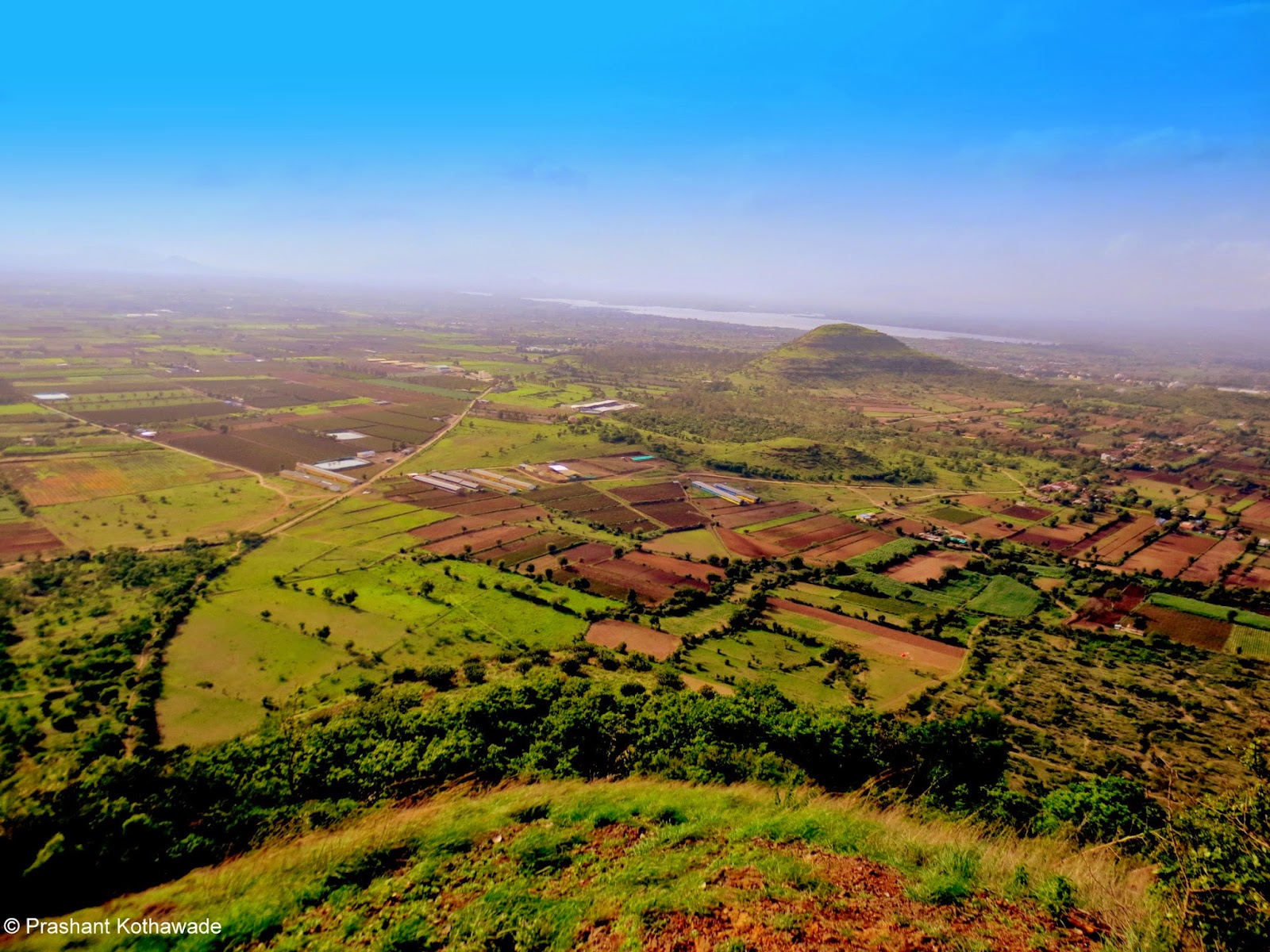 Eastern side of the fort as seen from the temple: 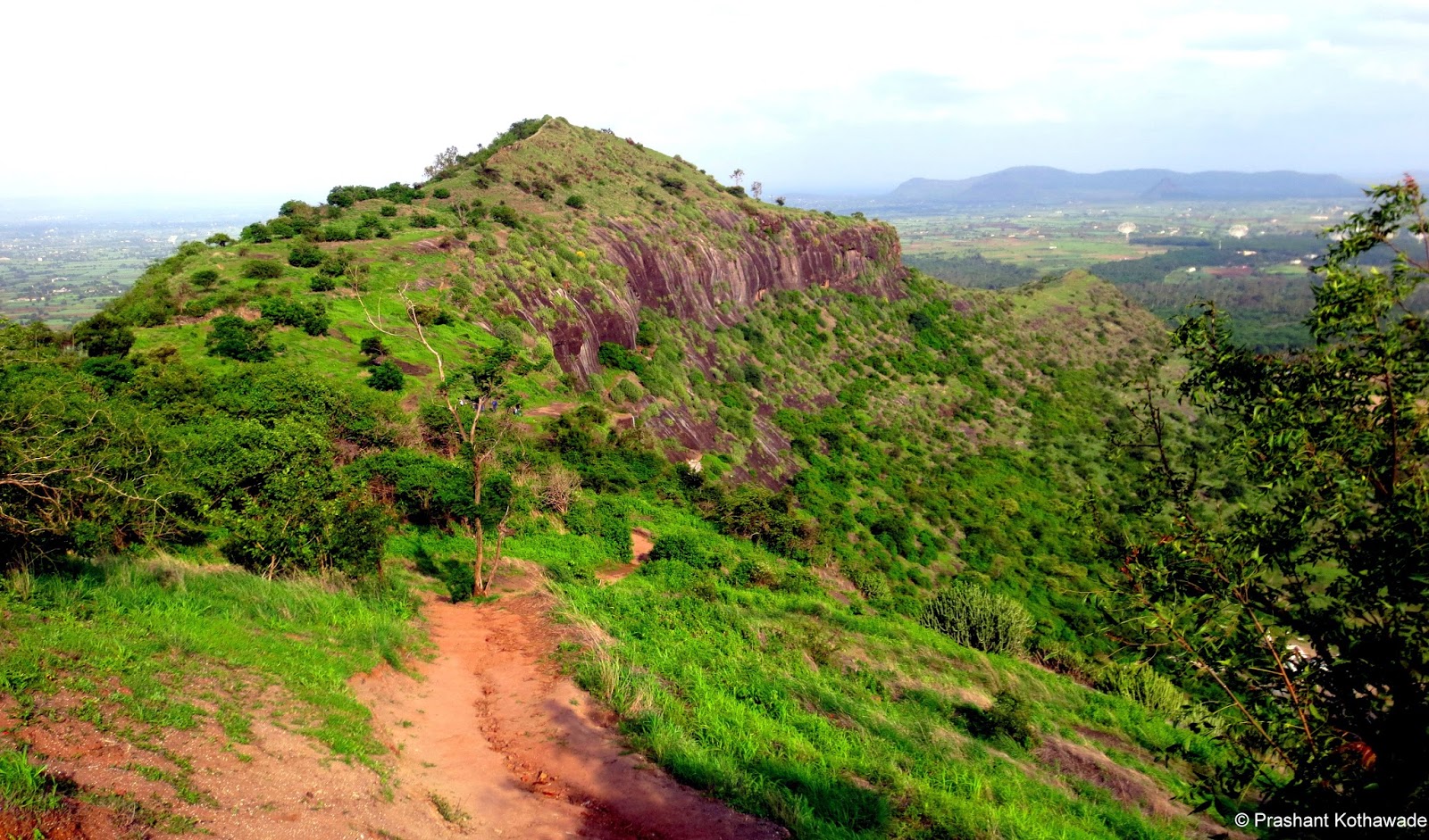 Broken structures on the fort give fair indication how rich the fort would have been in its prime.

Remnants of the sadar: 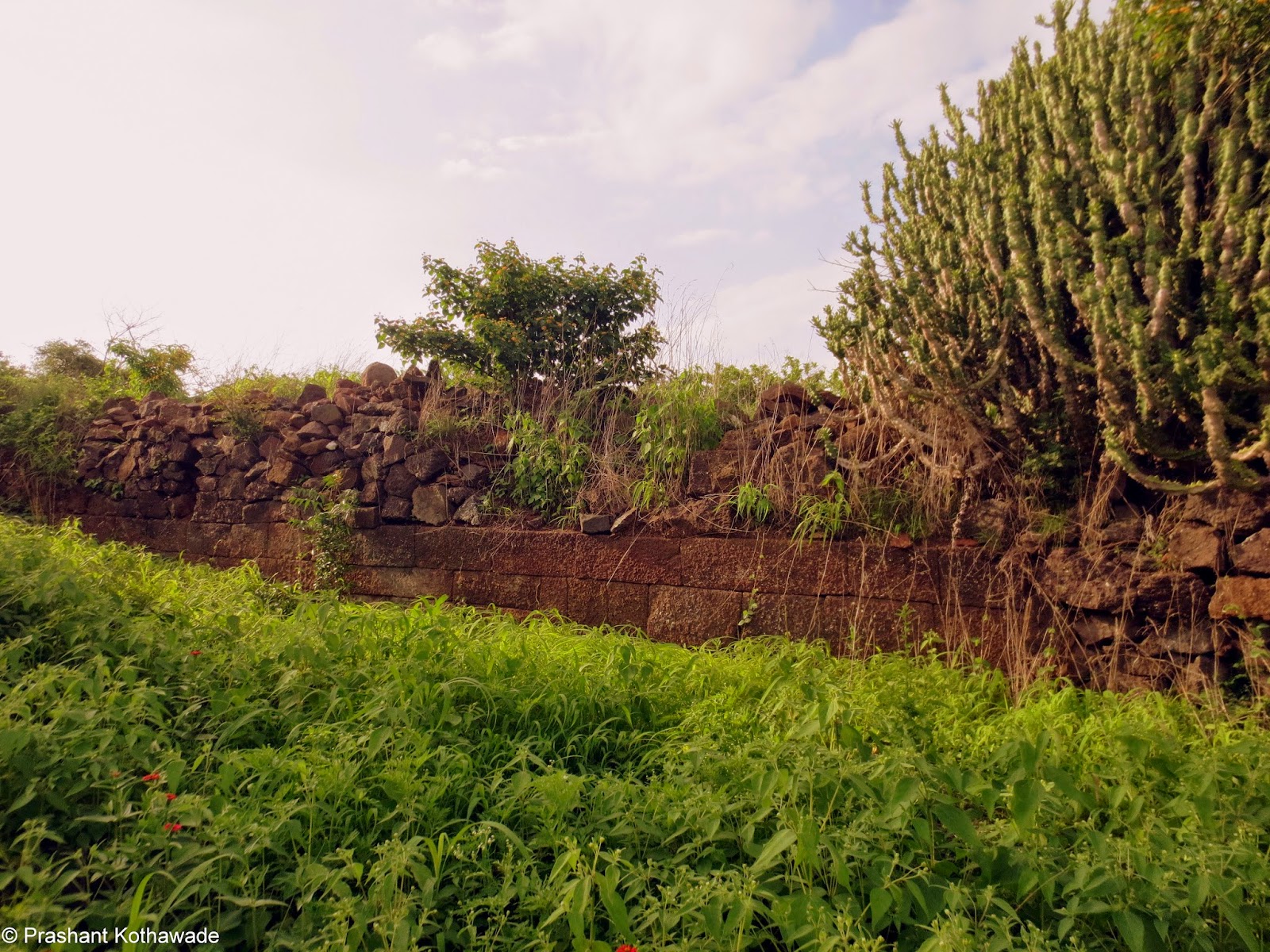 A broken part of stone doorway with a figure of Lord Ganesha: 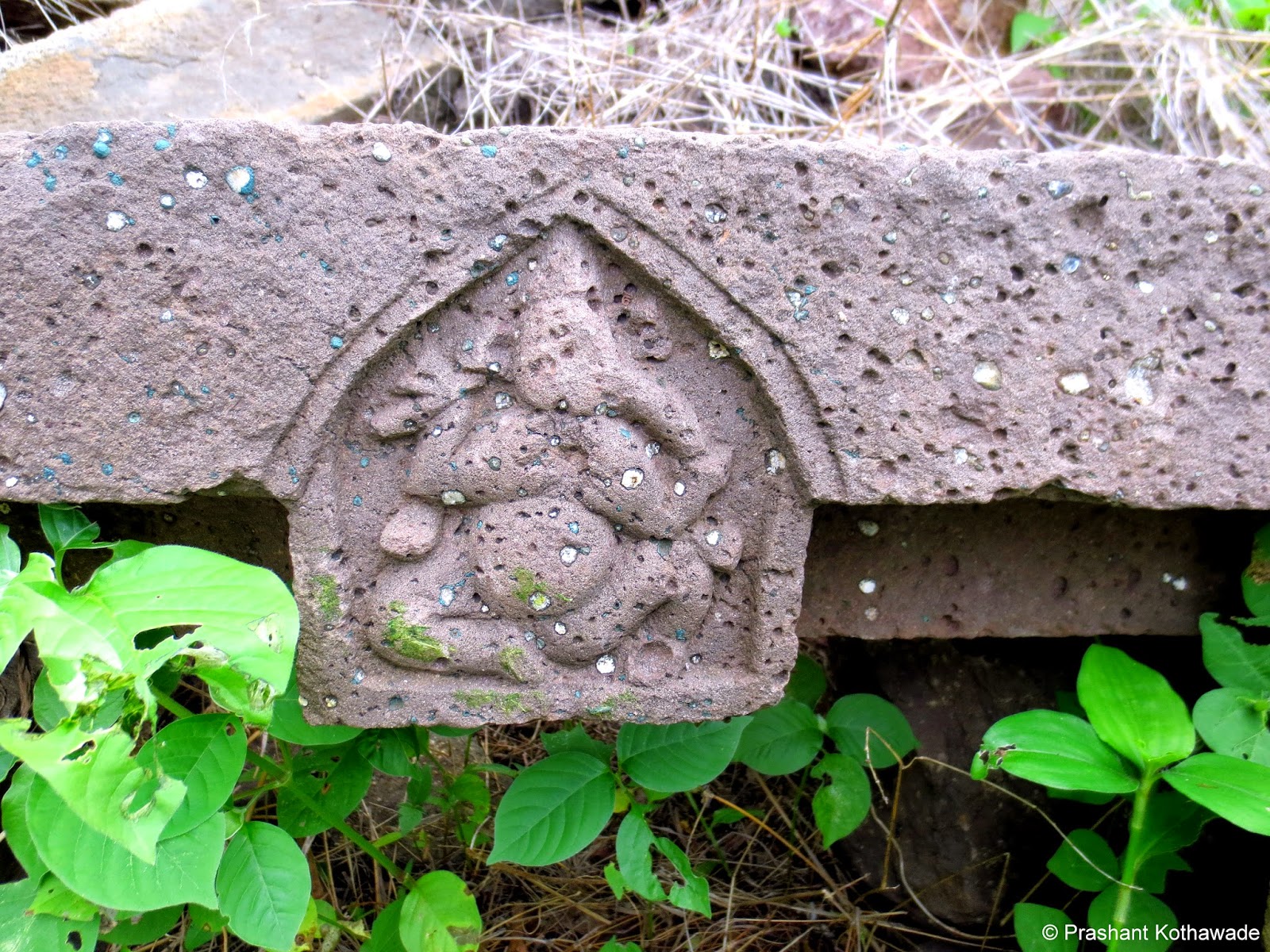 As we started exploring the other part of the fort, we came across a lot of water cisterns.Water in the one of the cisterns is said to have the healing power as we were told by few local villagers whom we met on the fort.

Water cistern on the North-East part of the fort which also has some inscription in devnagari on one of the walls: 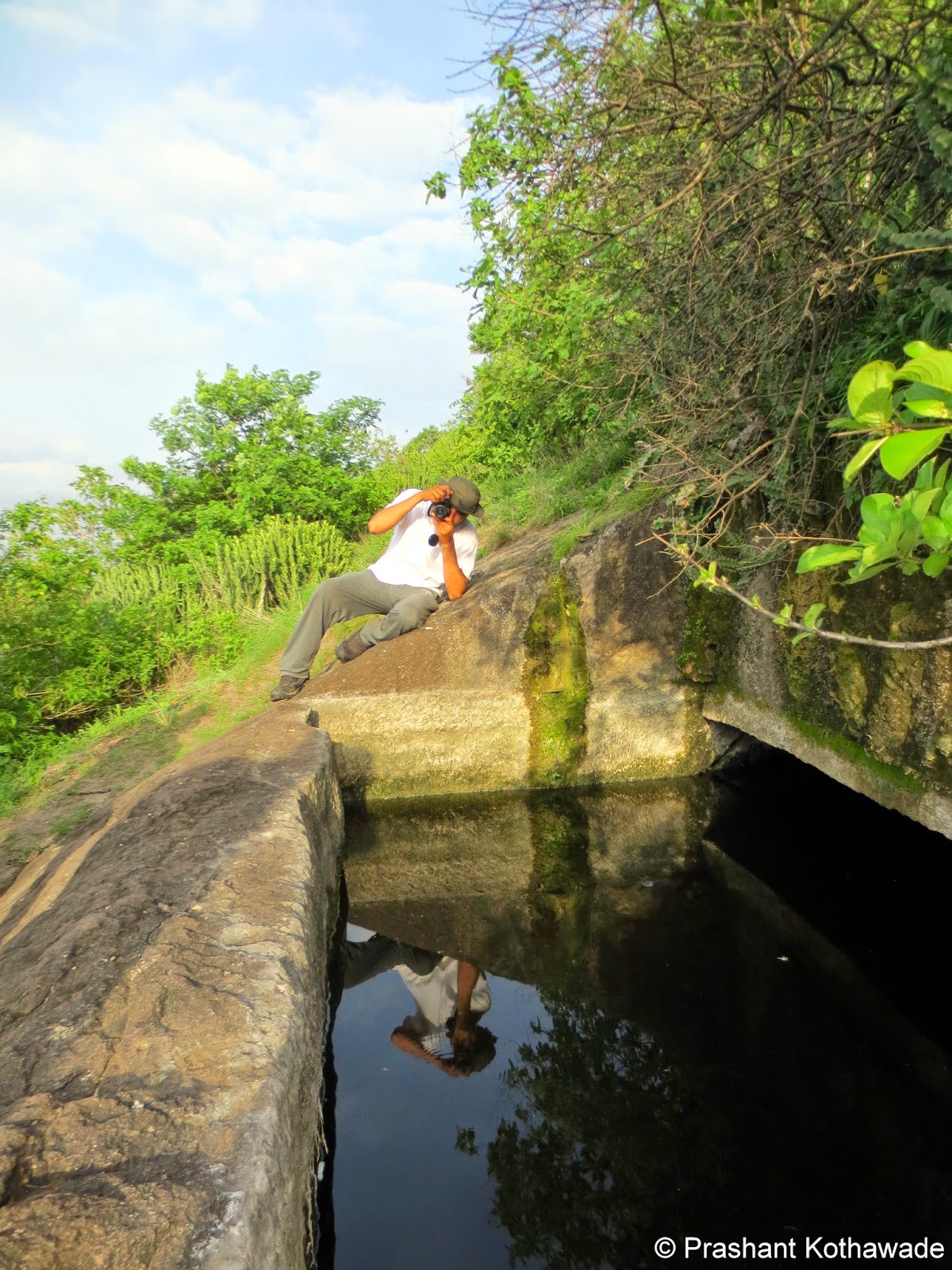 Another big water cistern on the South side named as "Narayan Taake": 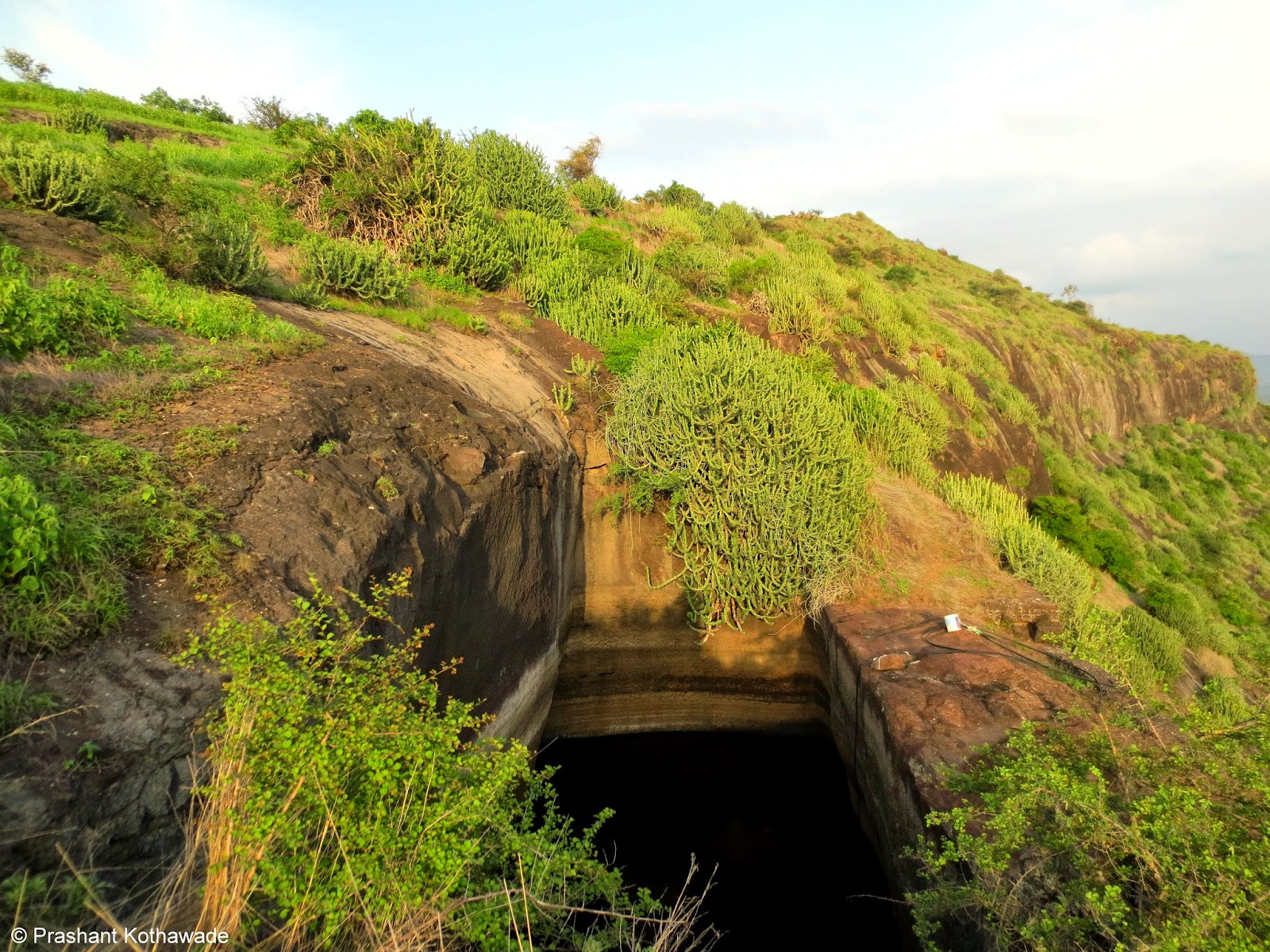 Another set of water cisterns on the South side named as "Chambhaar Taake": 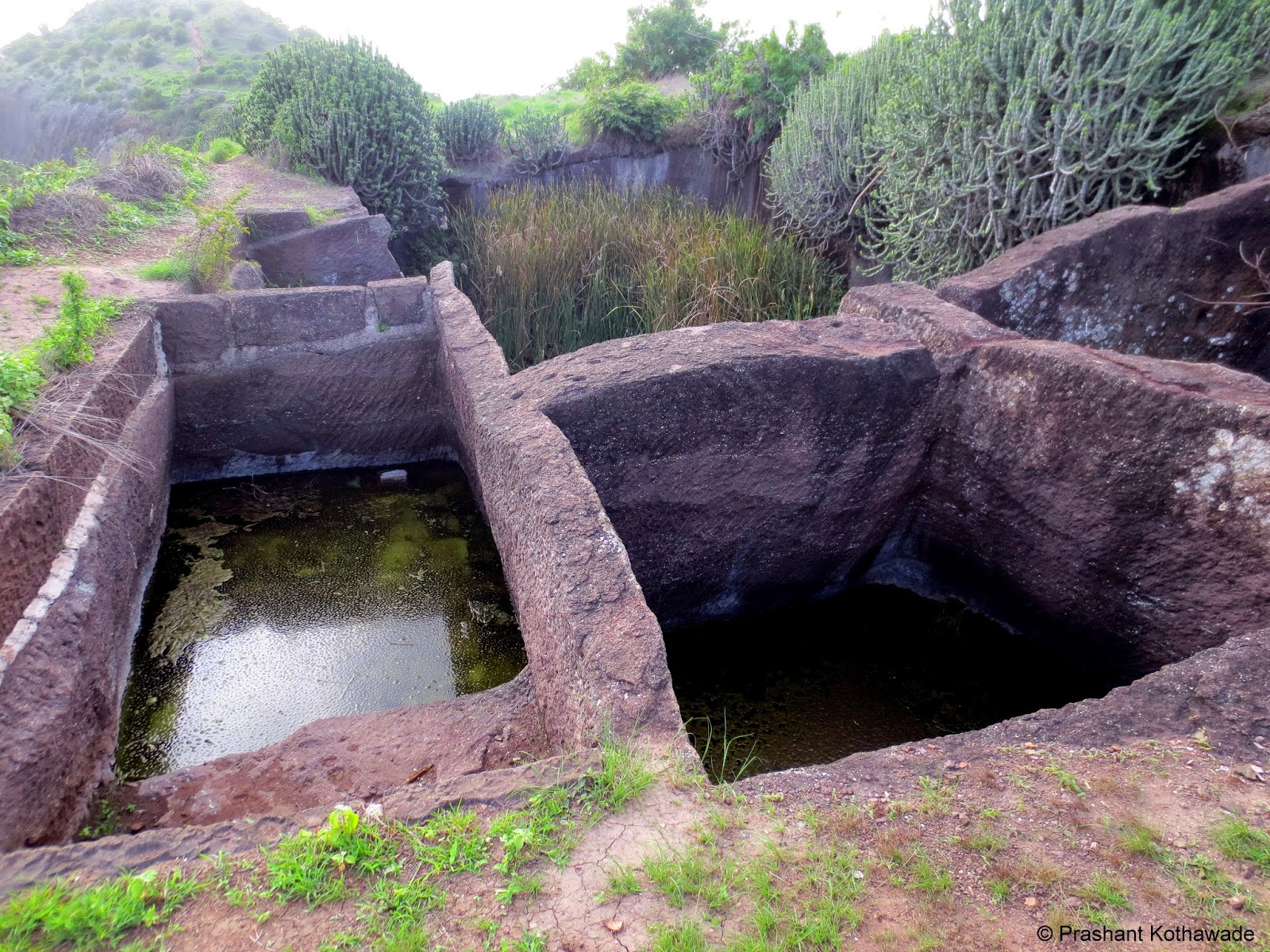 Our exploration of the fort was almost over and large rocks on topmost part of the fort caught our attention and we climbed on those rocks soaking in the cool breeze. 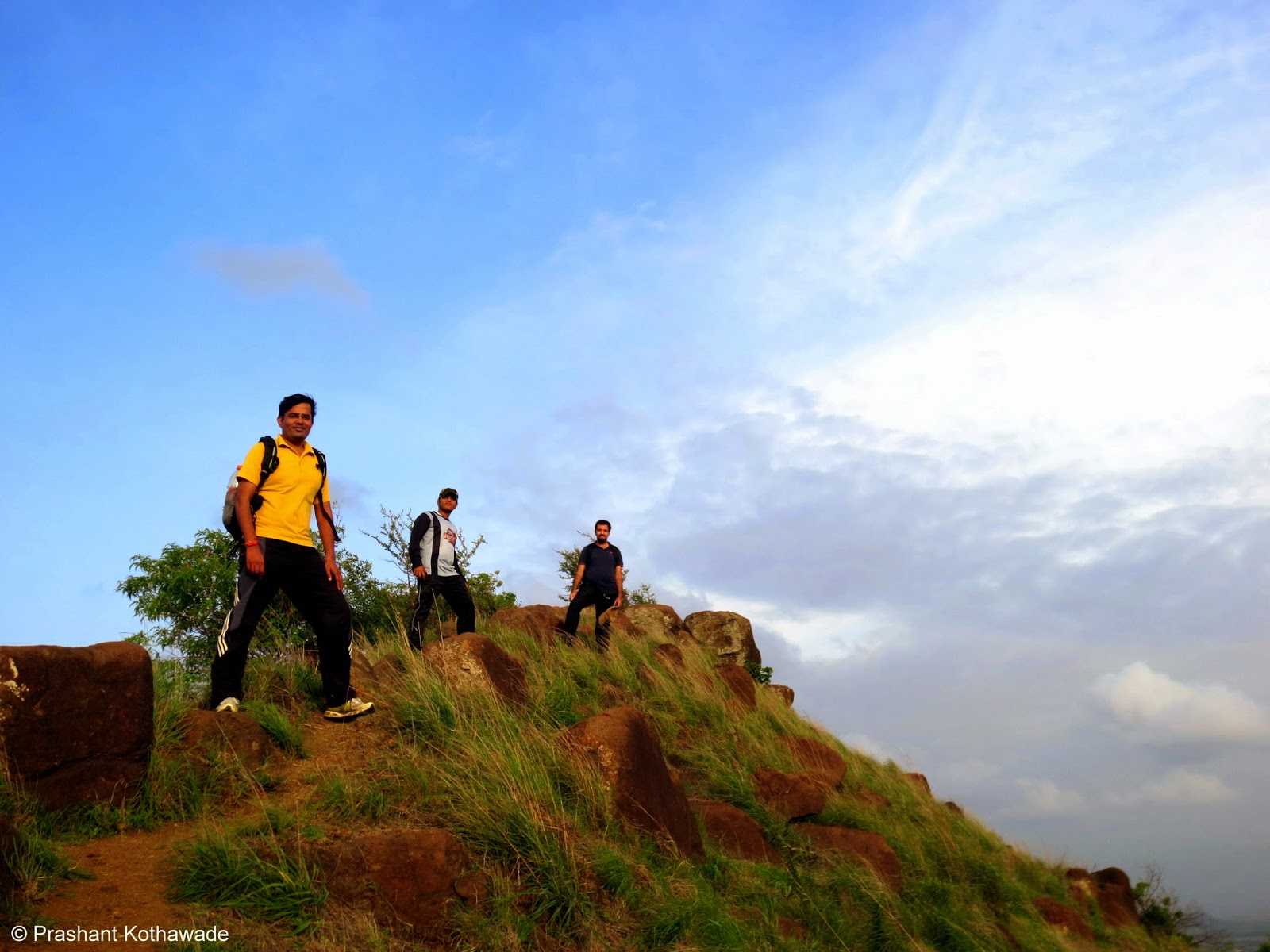 Moment of absolute freedom; a moment frozen in the mind forever! 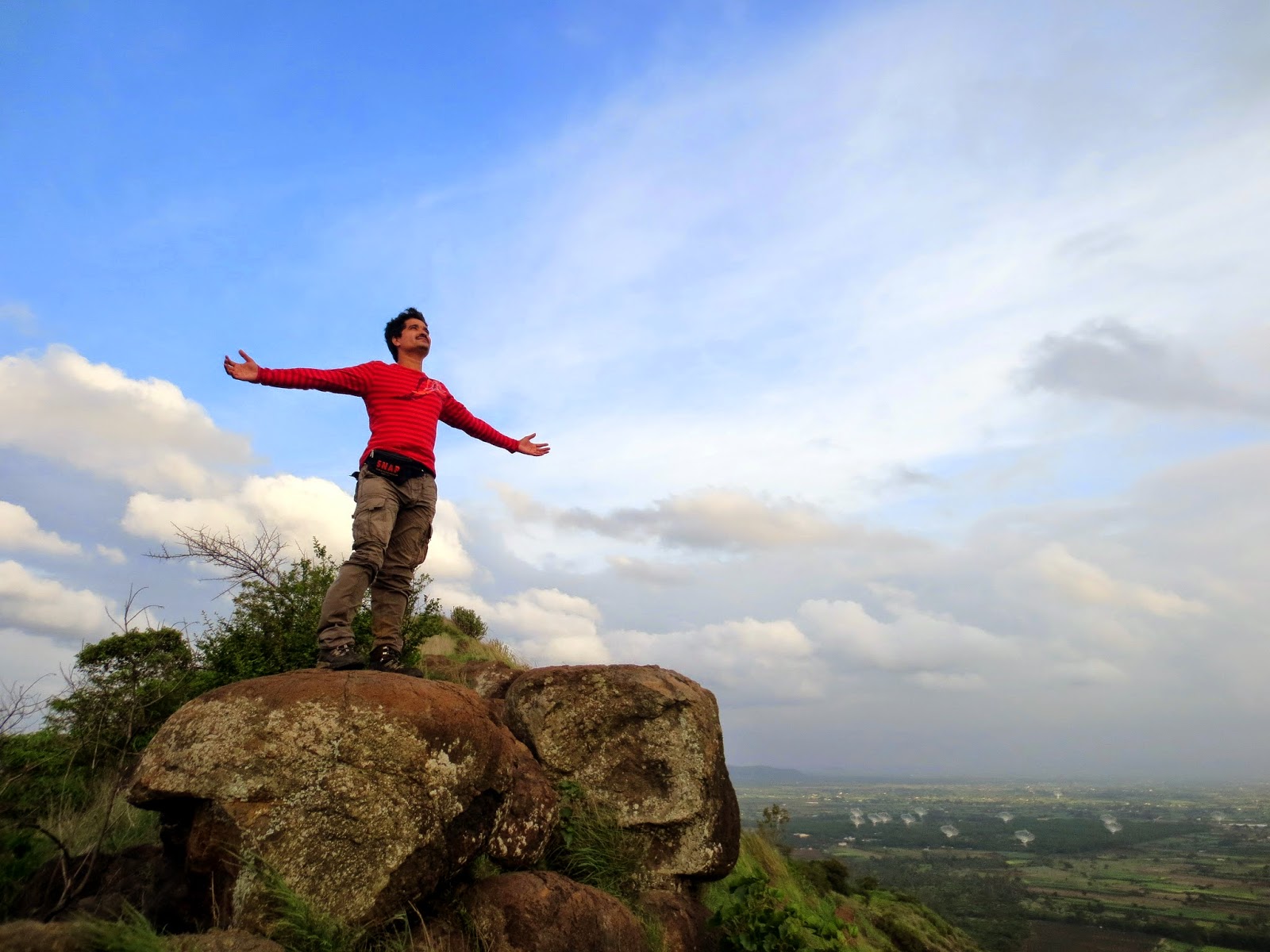 We just did not want to leave the fort. We were experiencing so much of bliss in the solitude of nature and as sun was descending down to the west, whole fort was dazzling with the golden light. 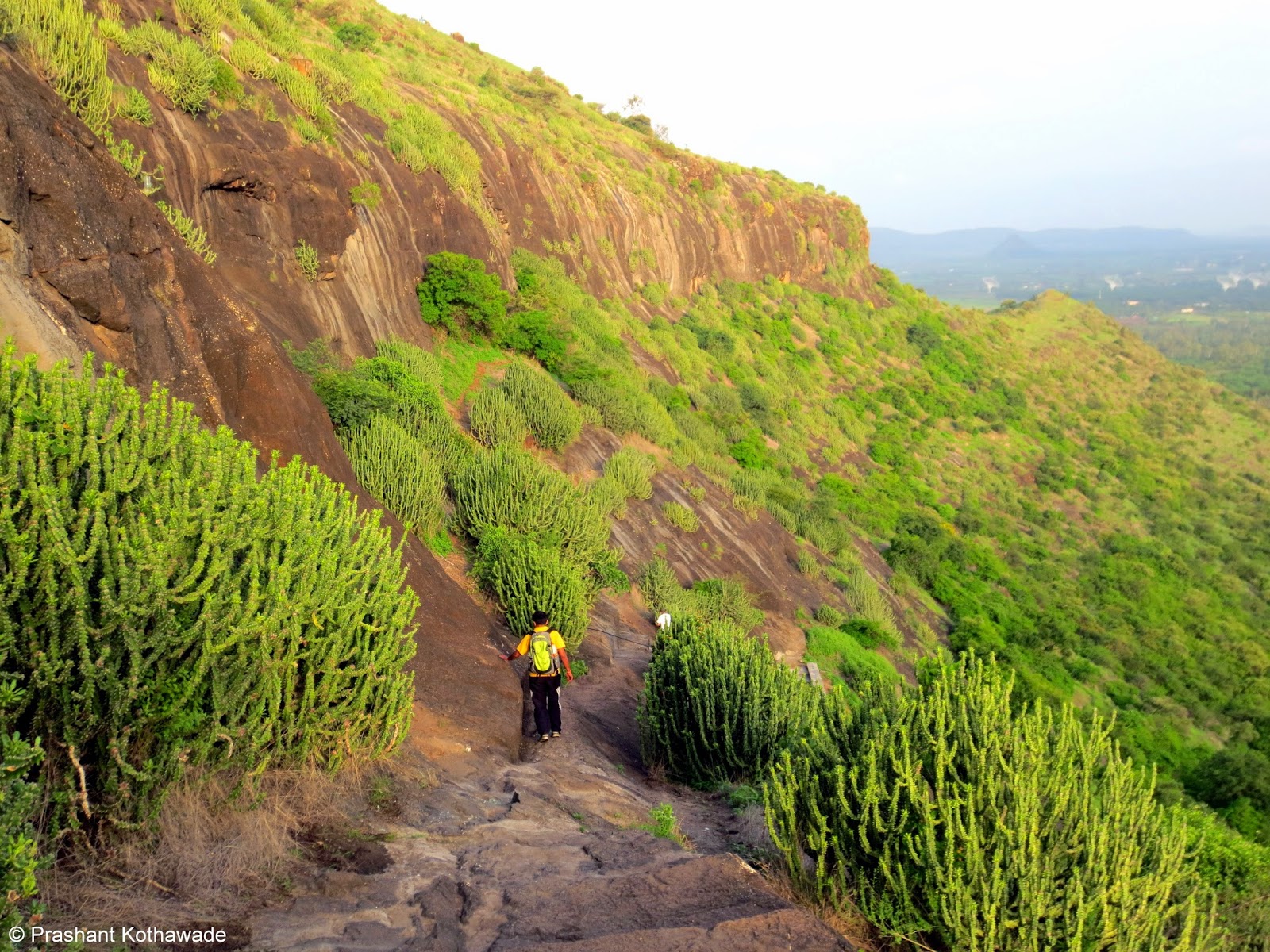 With heavy heart, we started descending. By the time, sun was rapidly taking its stride to the western horizon. 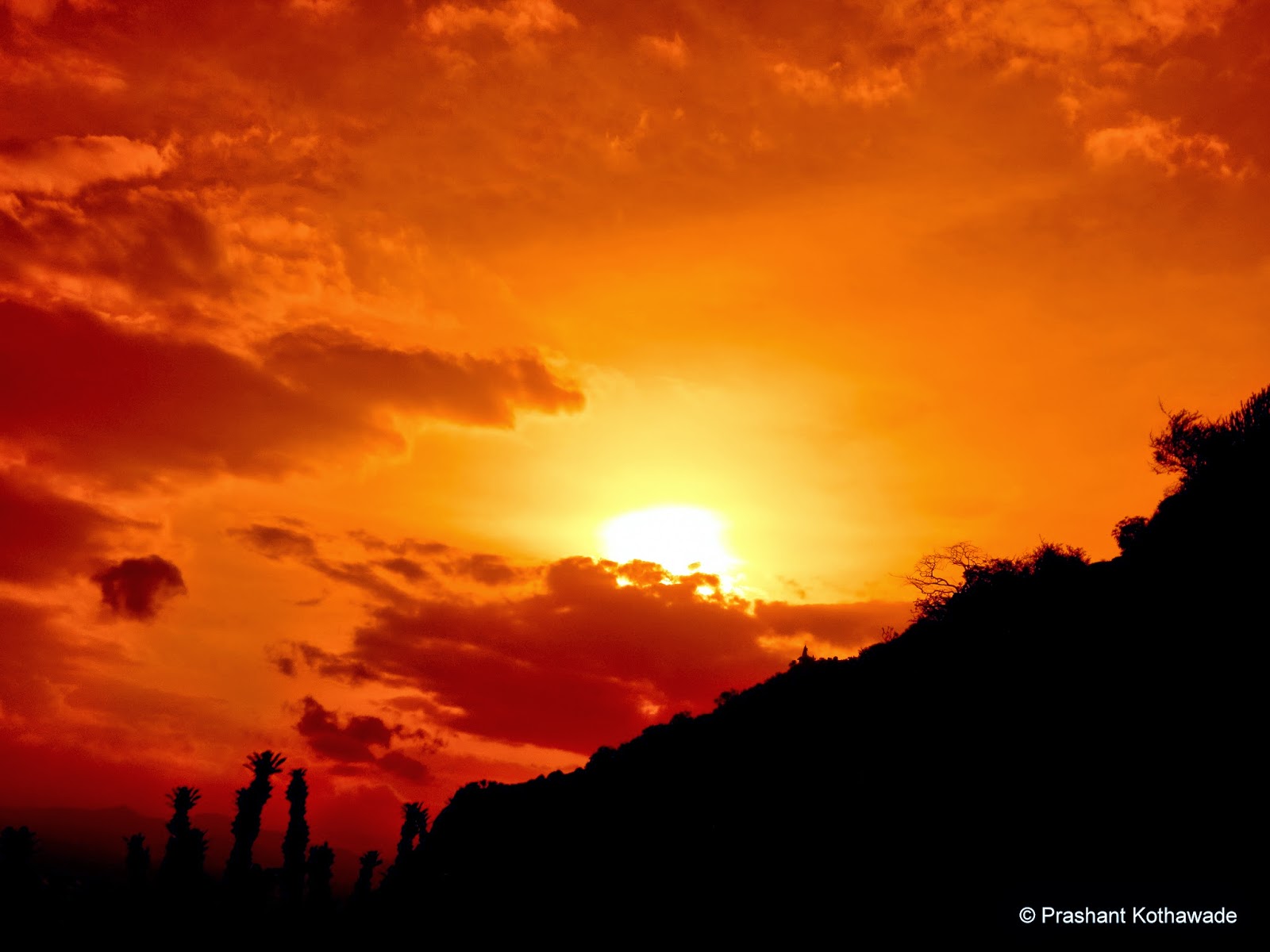 After reaching to the base, we sprinkled water on our faces to feel rejuvenated, wore some fresh cloths and started our journey back to Pune reminiscing the day full of excitement, adventure and contentment.

There are some spectacular days in one's life and memories of those days are etched in the mind forever and this was certainly one of the them. After all, life is all about collecting small, precious moments, isn't it?