Time 4 pm:
Plan for Bhimashankar was set perfectly. This time, my cousin Sanjay Amrutkar, a famous trekker and photographer and his group from Nasik and my group from Pune were going to trek together. Both the groups were formed but alas! There was some communication gap. I prepared the group to hike on Saturday, 30th Aug and my cousin prepared the group for Sunday, 31st Aug. Though I had sent the detail plan to my cousin on whatsapp, he forgot to notice the day and date. There was a sudden last moment’s twist in the overall plan. Changing the plan at the last moment was difficult and after discussing with my trek-mates, I decided to go ahead with the trek without Nasik Group.

Time: 4.30 pm:
Rain was pounding on the occasion of Ganesh Chaturthi.It poured heavily for more than an hour and

there was water everywhere. This was a potent sign considering I was going to trek in the Bhimashankar region – the region known for its heavy rainfall.

Time: 5.30 pm:
Tiny droplets were hanging on my balcony grill. I decided to capture it in my camera. To my dismay, message popped up on my camera screen “No Memory Card”. I checked the camera and memory card was in place. I shook the camera, re-inserted the memory card but still the same message. Damaged memory card on the previous evening of the trek. Another bad luck!

Well, three instances happened which could have easily toppled the plan of hiking to Bhimashankar but the sheer determination helped me not to deter from the original plan. By evening, rain was abated, I purchased the new memory card, personally called each of trek mate (Milind Patil and Siddheshwar Kadam - my office colleagues, Sameer Kadam - my regular trek mate and Tushar Kothawade - my elder brother) to take the final confirmation and finally, everything regarding the trek plan came back to normalcy.

Saturday morning dawned without any rain which was such a big relief. Siddheshwar was supposed to join me on Sus Road at 6 am but he called saying his two wheeler got punctured and he would be coming by his car. He arrived almost 25 minutes late and we started around 6.25 am from my home. Siddheshwar was in mood of driving his car; so instead of taking my car, we decided to take his Swift Dzire car. I was happy as I was delegated to the rear seat where I could just relax and enjoy the whole journey as a passenger. We picked up Amol from Pimple Saudagar and Sameer from Kalewadi and we were on our way to Rajgurunagar – our first halt for breakfast.

After breakfasting Misal-Pav at the restaurant, we enquired about the petrol pump on the way to Bhorgiri but as there was no petrol pump available on that road, we drove backwards for 2 kms and got the petrol tank filled up.

We needed to take a left turn from Rajgurunagar. There are arrows indicating the direction of Bhimashankar. We came across Chaskaman Dam along the way and its backwater accompanied us for most of the journey. Whole expanse of water was looking gorgeous and we soaked in the views. 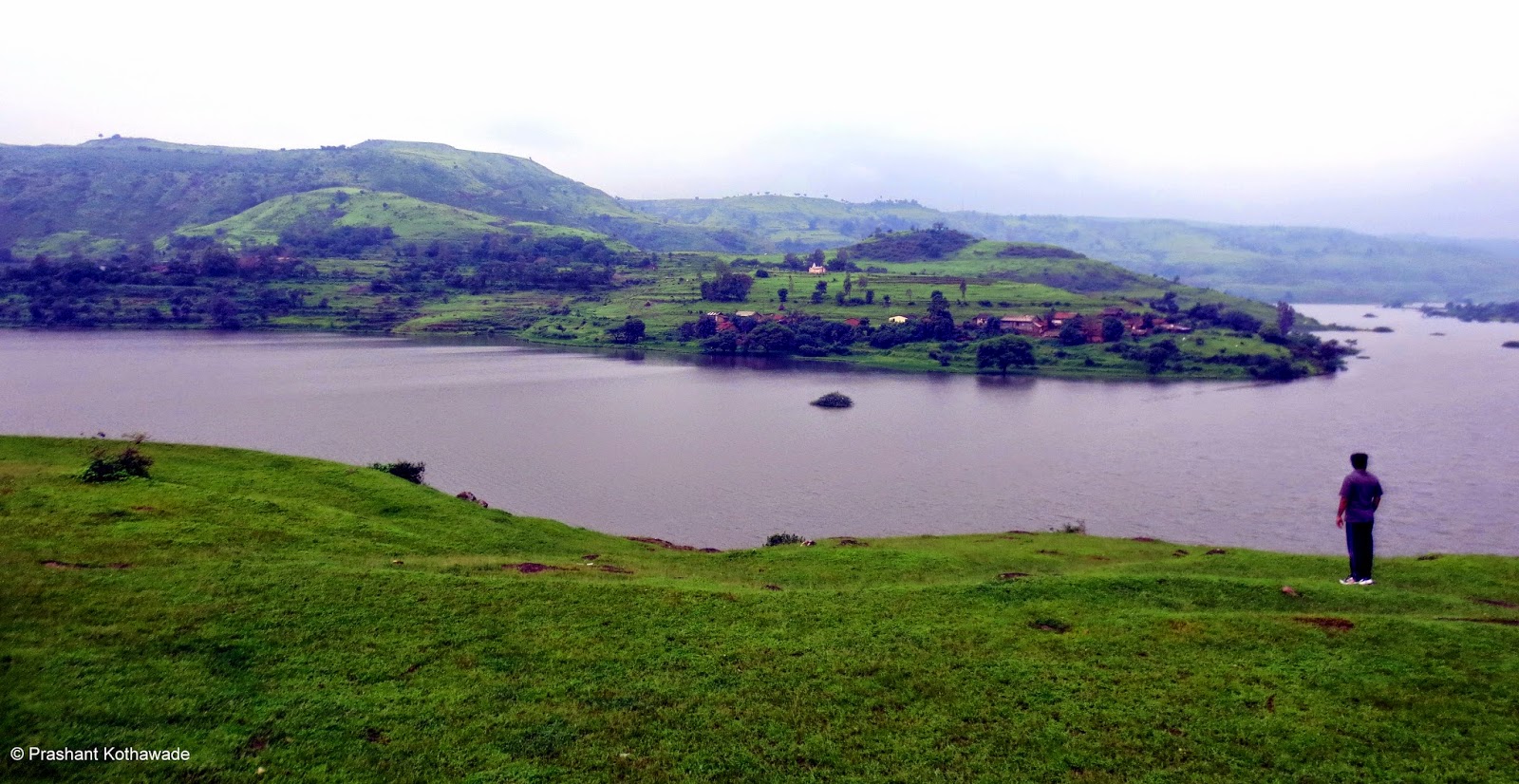 The weather was overcast but there was hardly any iota of rain. Whole earth was carpeted with lush green grass and it was sight to behold. Road condition was better than expected and we all were enjoying the scenic ride. 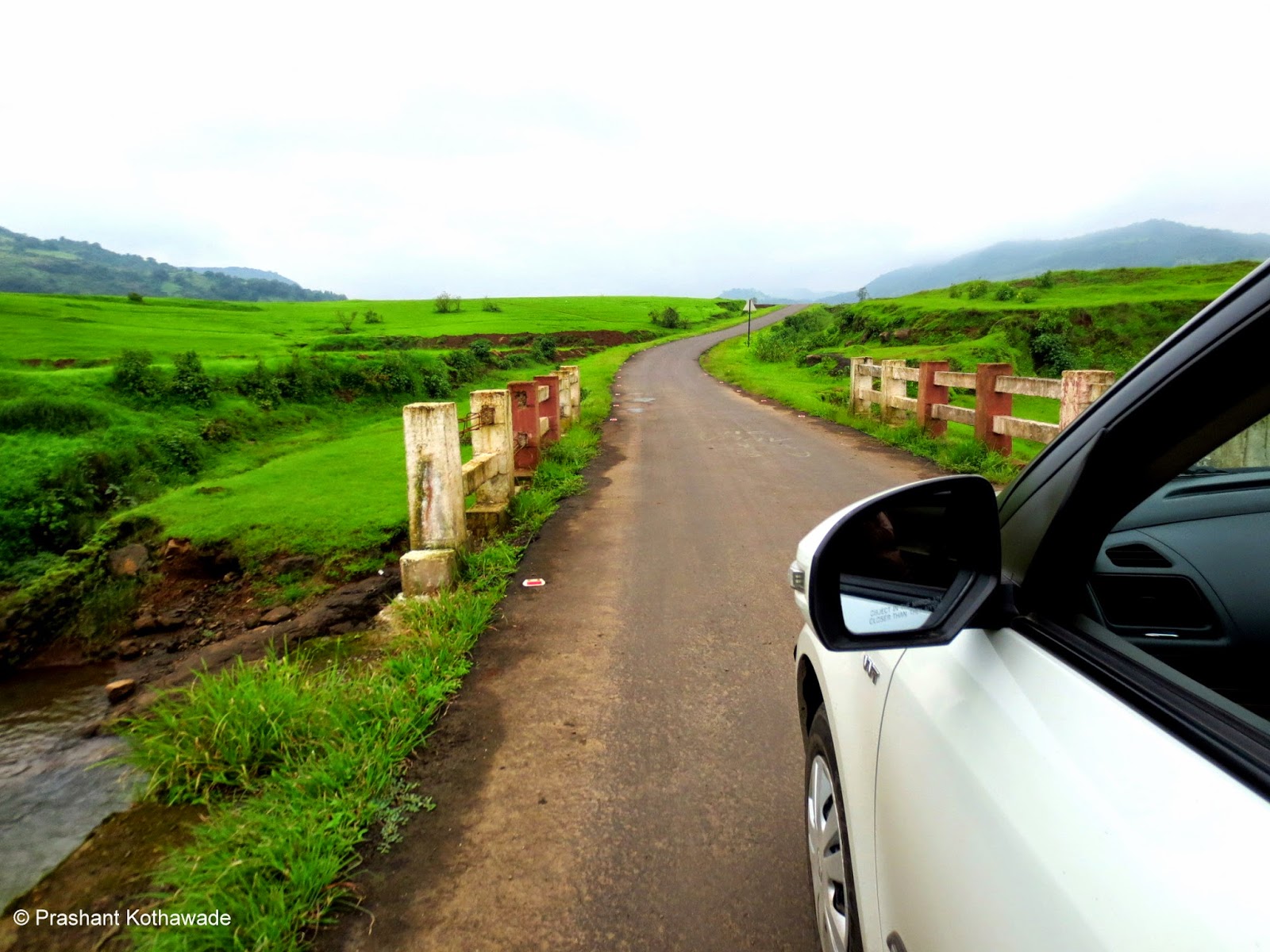 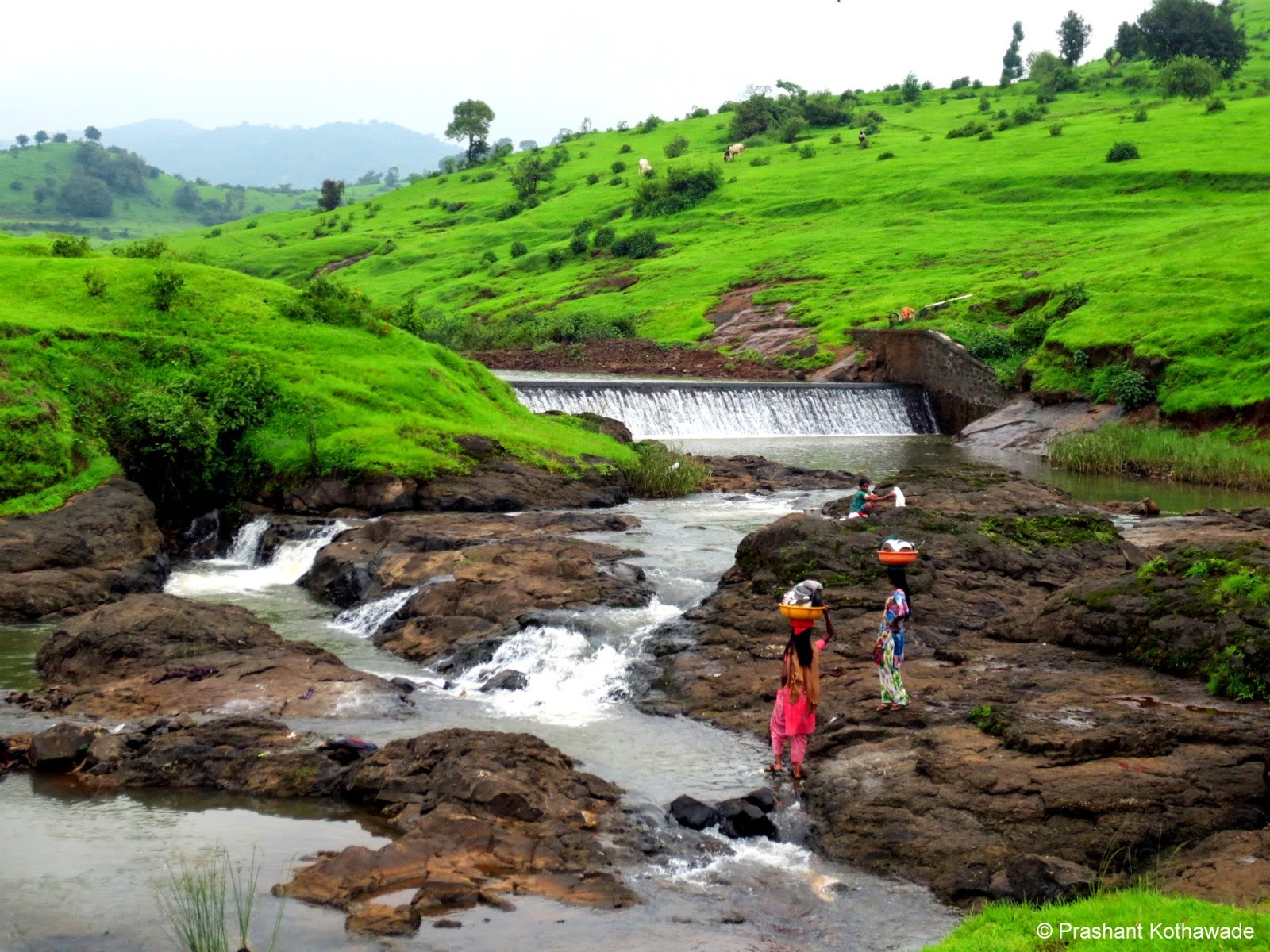 Soon, we reached to Bhorgiri and parked our car beside a temple. Many college going boys were sitting in premises of temple and after enquiring for the guide, one of them, a boy named "Ajit" agreed to join us and we started our hike amidst the breathtaking scenery. 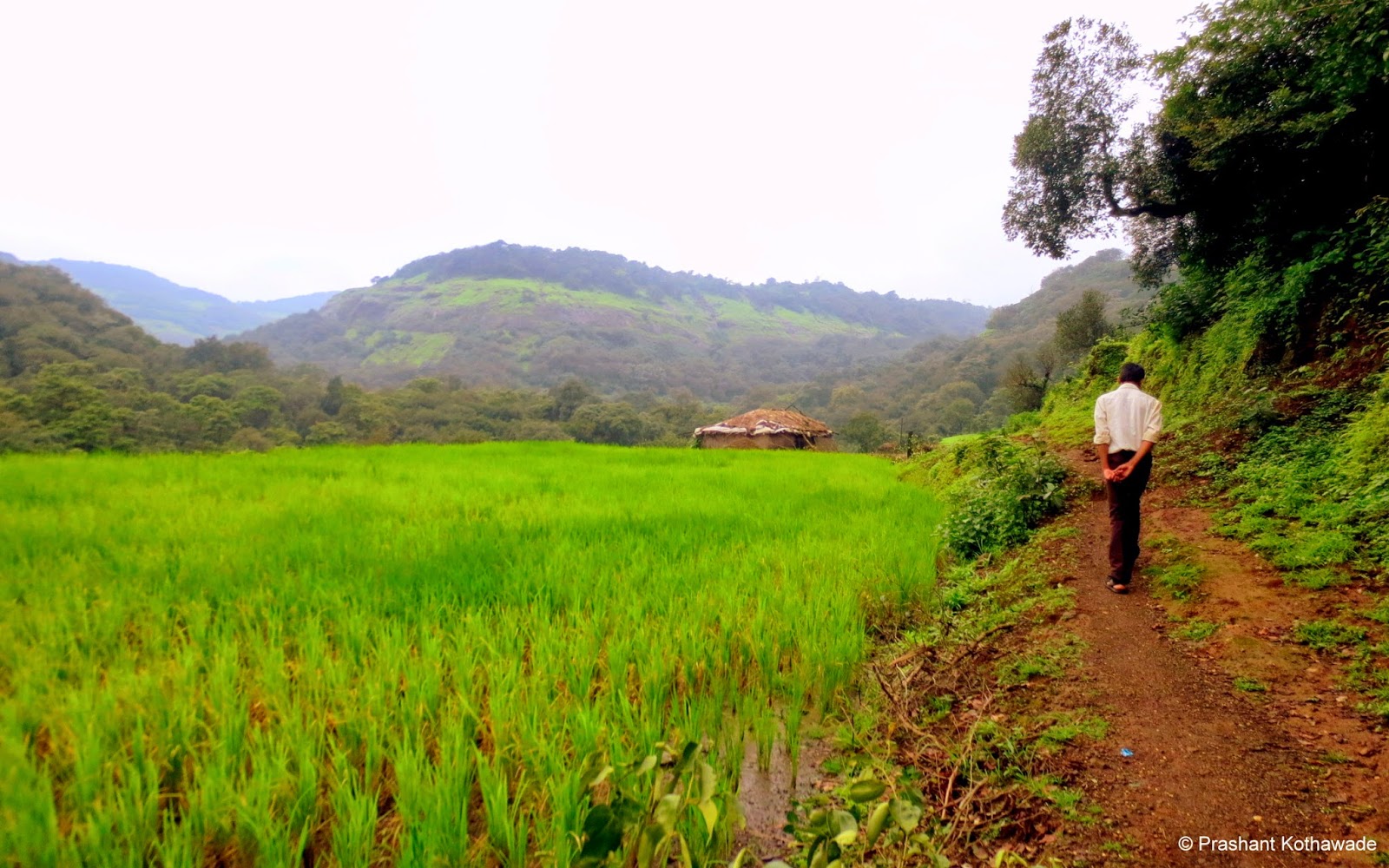 Initial walkway passed through the dirt and muddy puddles which gave fair indication how our next hiking trails would be. After walking for certain distance, we came across first stream which we had to cross by jumping on stones inside the stream. 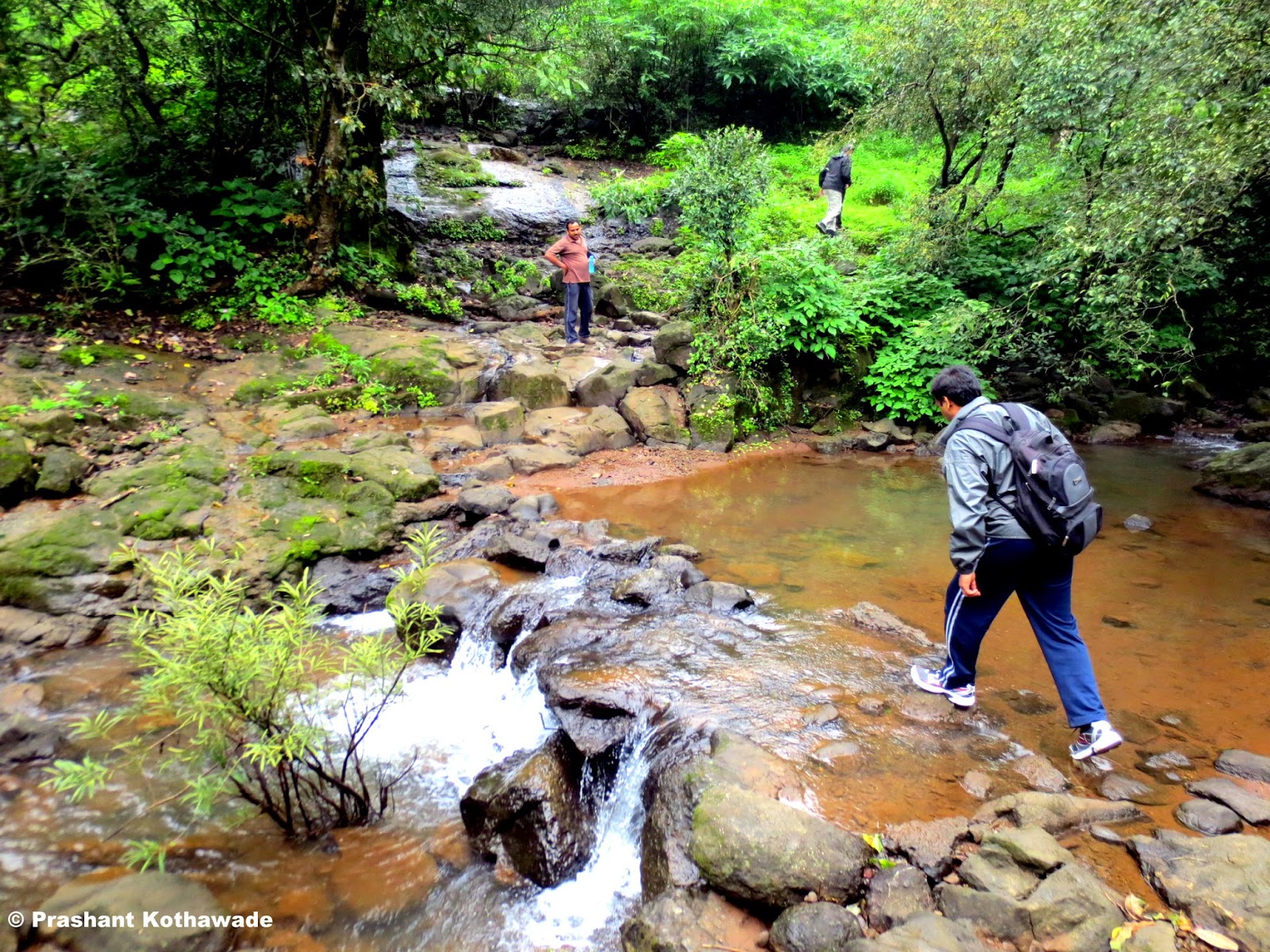 Soon, the hiking trail entered the dense forest and there we had our first glimpse of Giant Malabar Squirrel (called as Shekroo) – the famous squirrel in Bhimashankar forest. There were two of them -  giant, brown coloured squirrels with a very long tail. We were awestruck by the beauty of this magnificent animal and tried to click few photos. But these squirrels were very agile in nature and we did not get any clear photograph but nevertheless we were happy to imprint the image in our mind.

Soon, we came across a small plateau and from there surrounding mountain range was visible. We spent few moments doing some photography and resumed our hike. 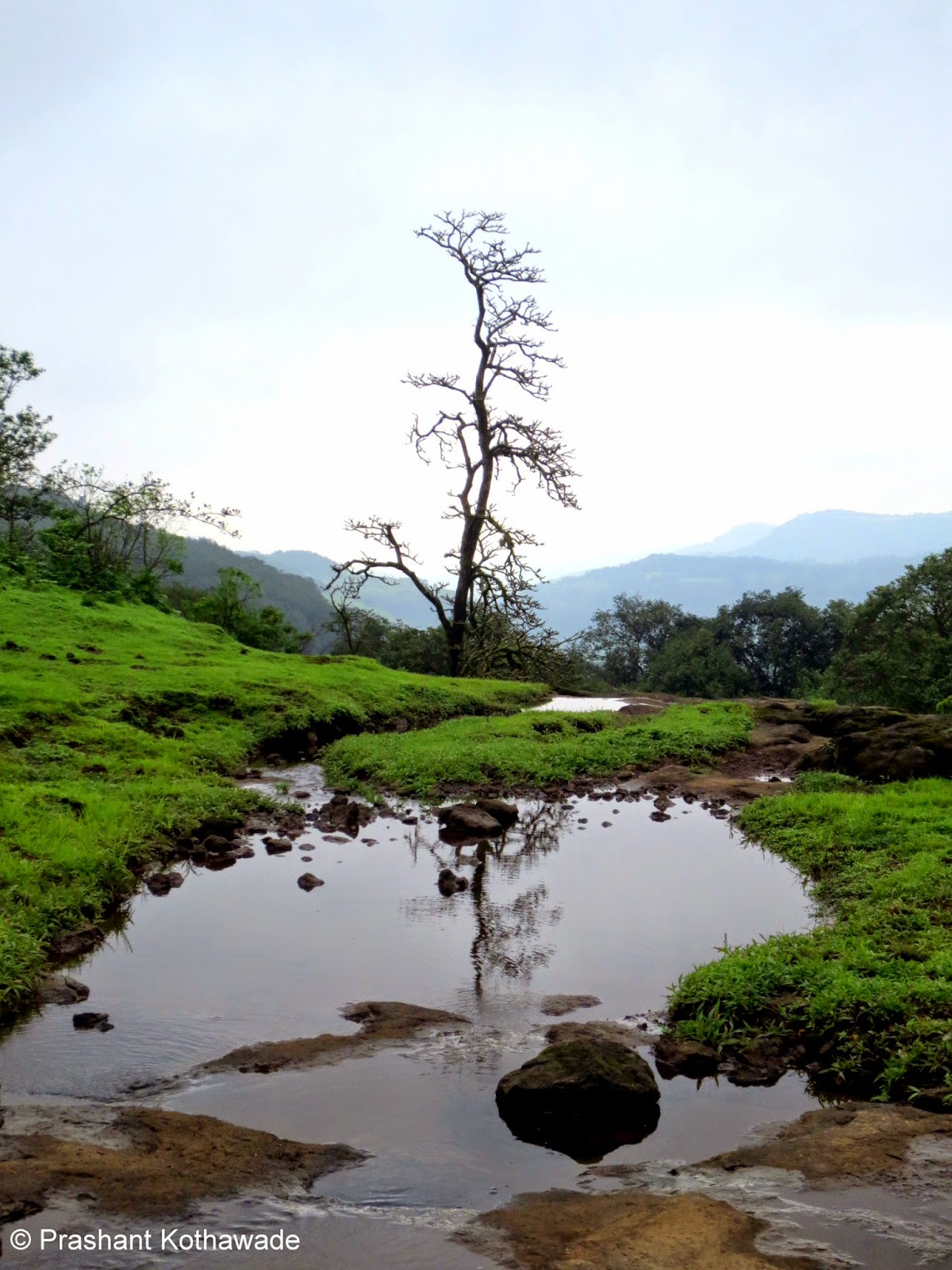 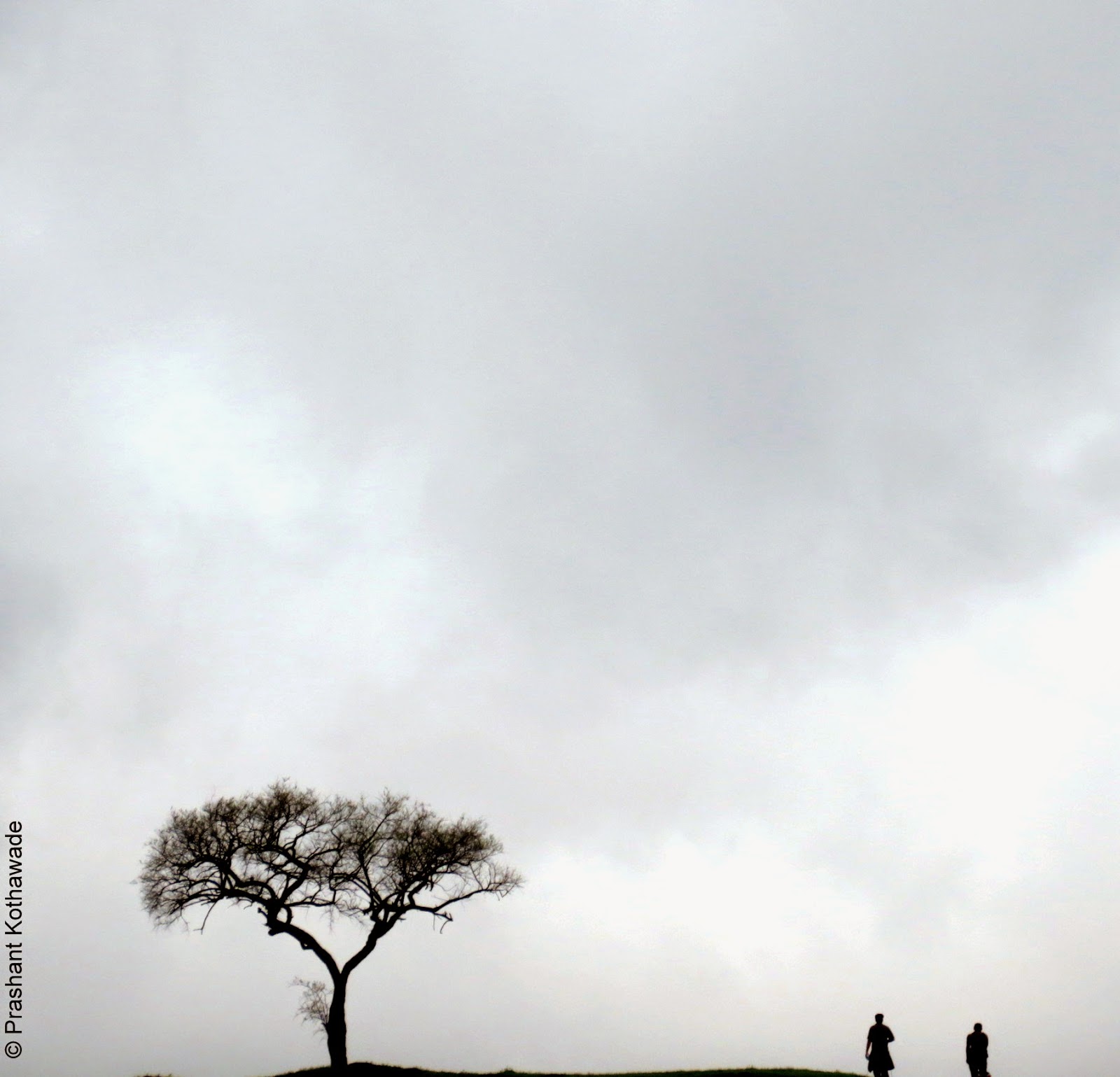 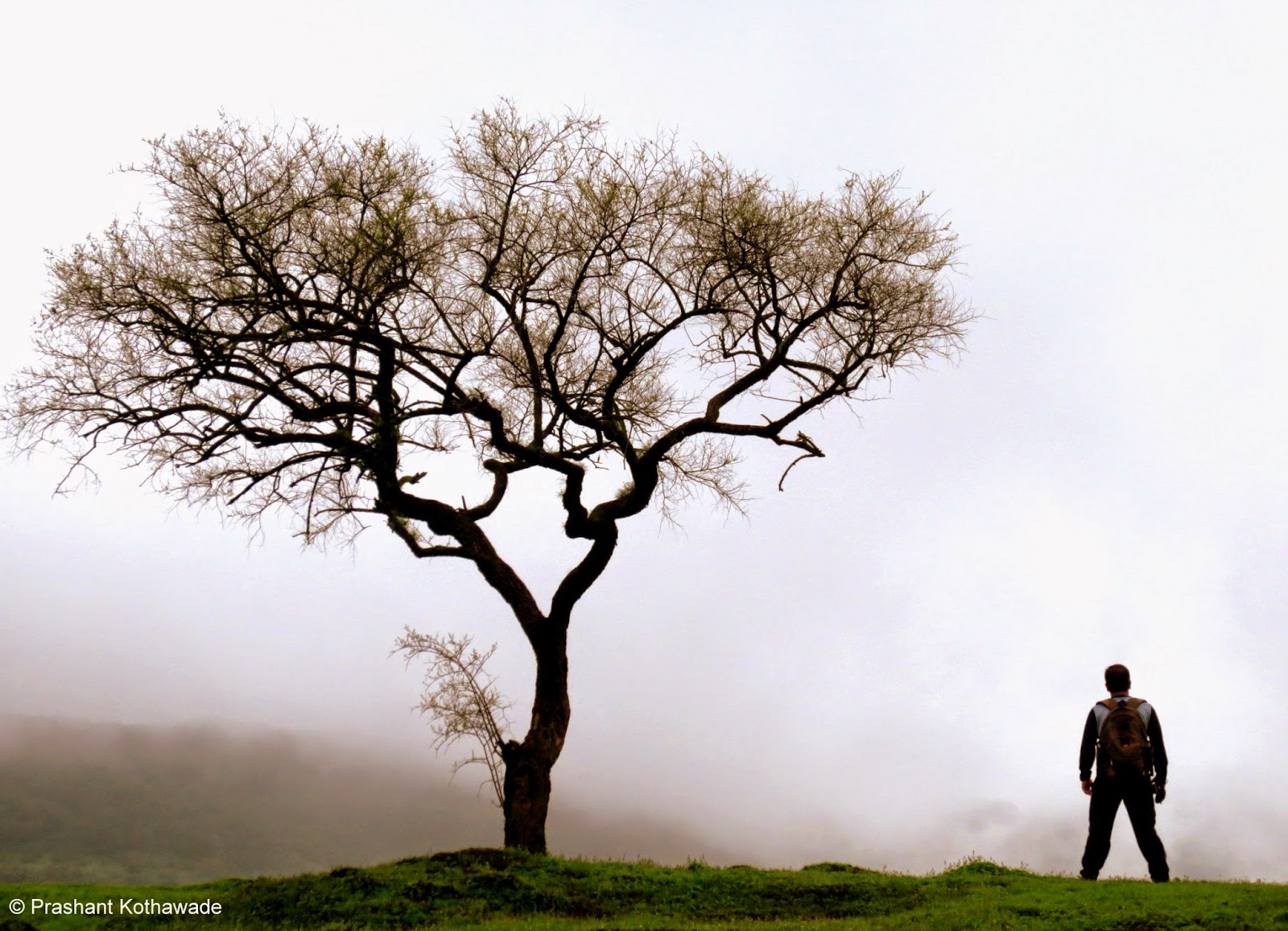 Unique thing about the hike that you continuously hear gushing sound of nearby streams which really is soothing to your ears. Along the way, we again had to cross second stream which was larger and wider. Crossing the stream without wetting your shoes requires a lot of skill – good firm grip, confidence on your shoes will take you through. If you are not confident, don’t try the acrobats and walk through the stream even if it means wetting your shoes. Wet shoes are better than a bad fall. 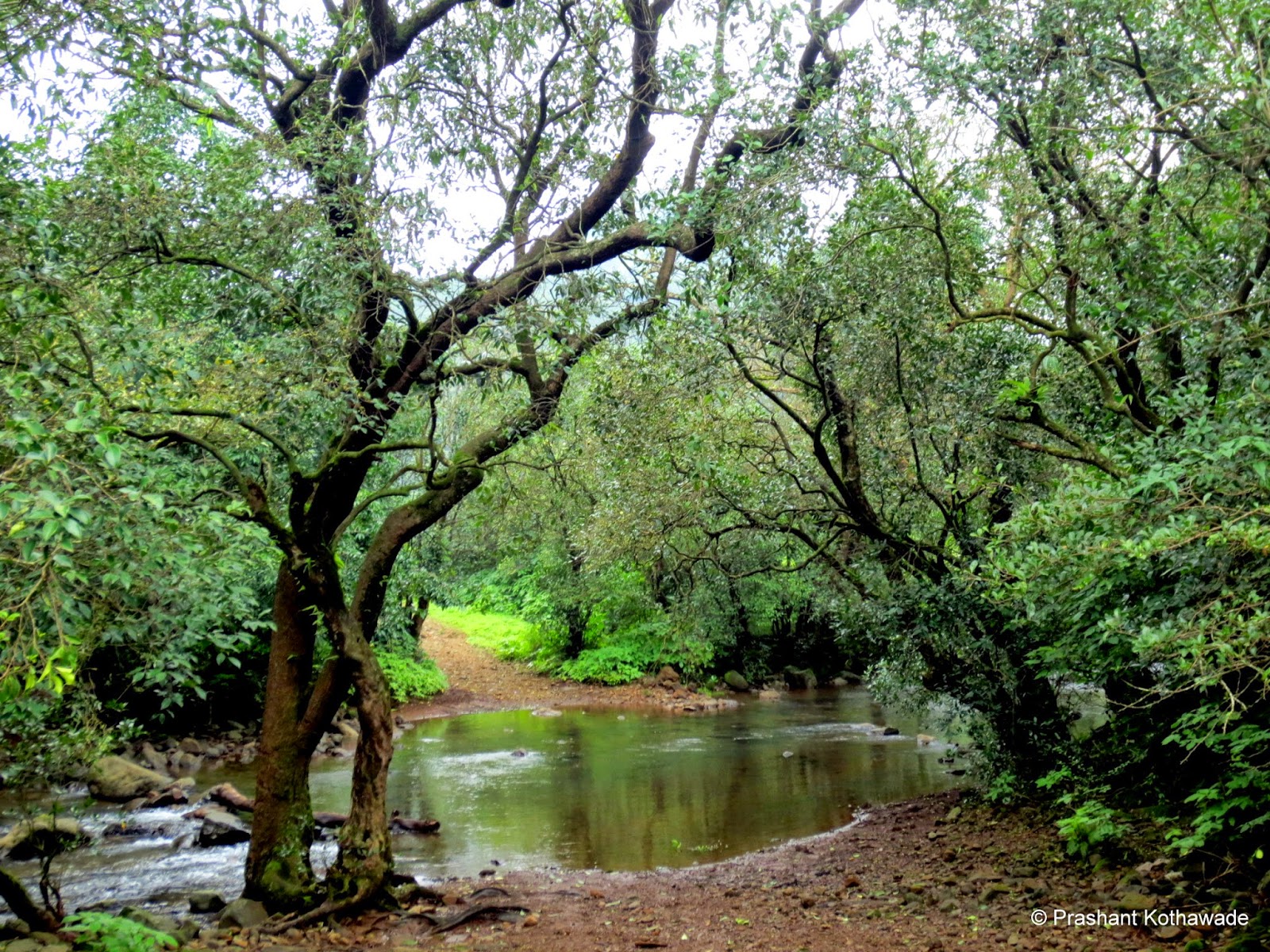 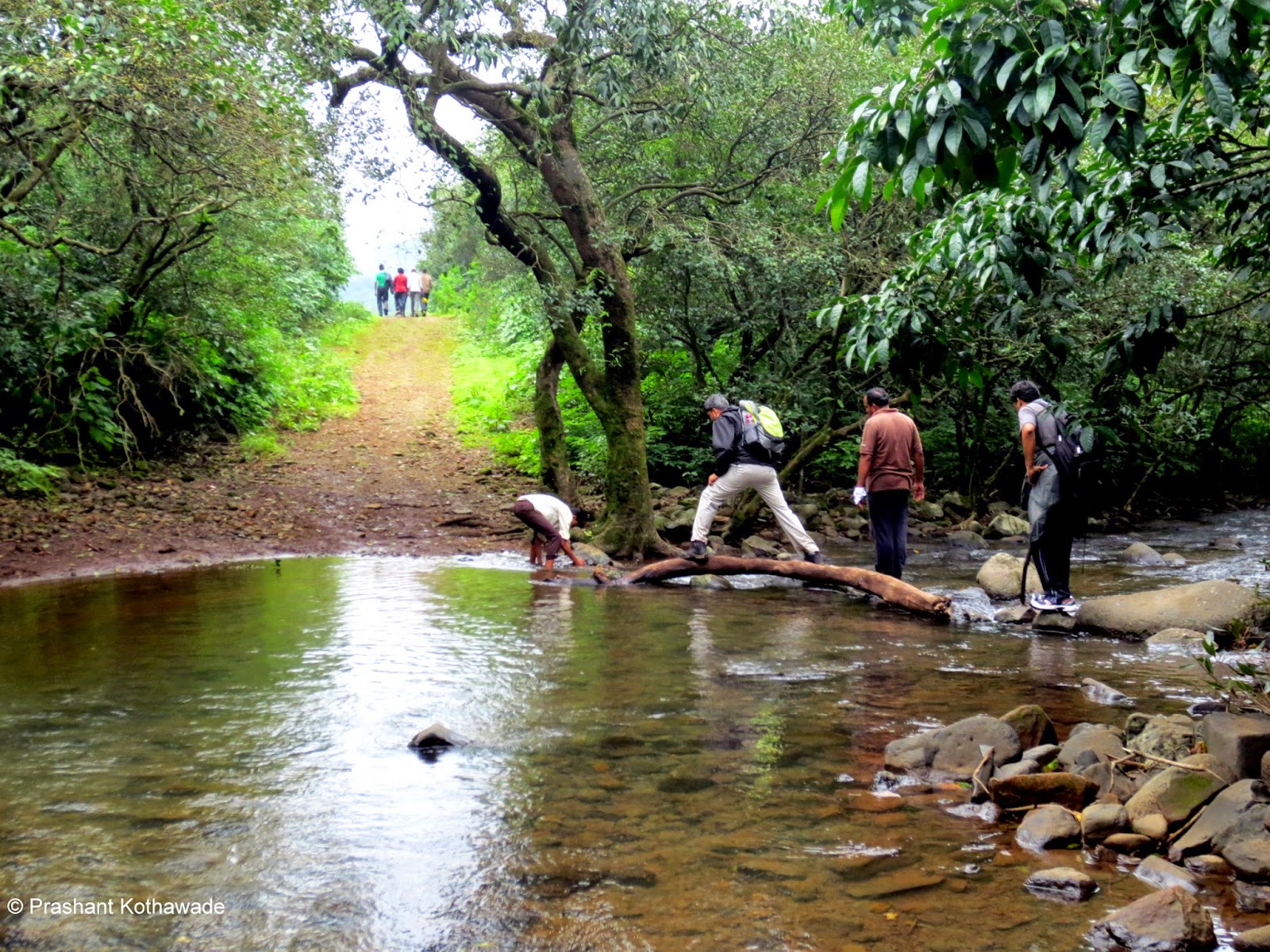 After crossing the stream, again on the left side, we spotted the giant Shekroo. This time we really got a good view and better time to photograph it and we were so ecstatic. 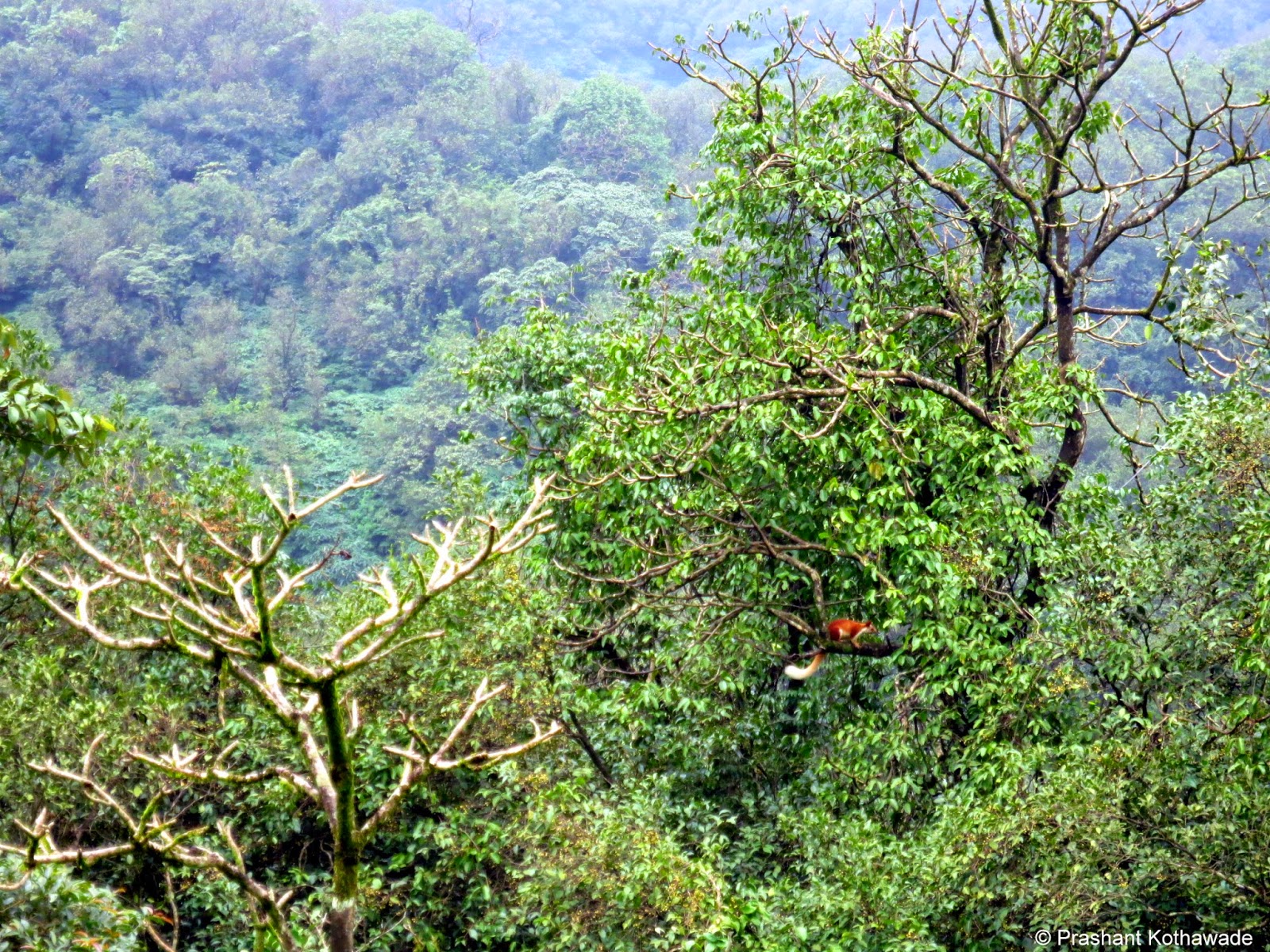 Beauty of the hike was that we hardly had to drink water from our bottles. Fresh and gushing water from the streams quenched our thirst. 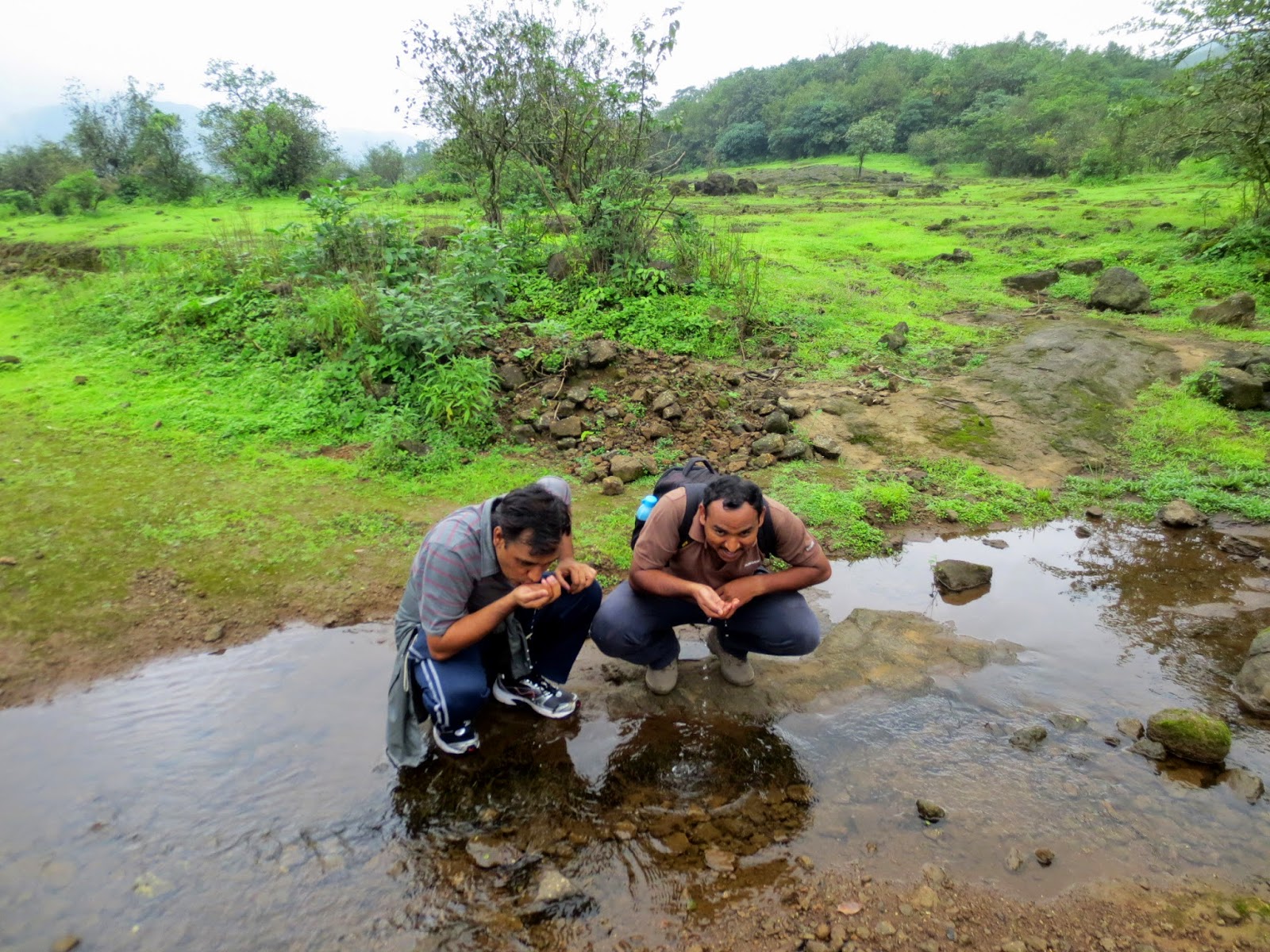 Last part of the hike was again through the dense forest 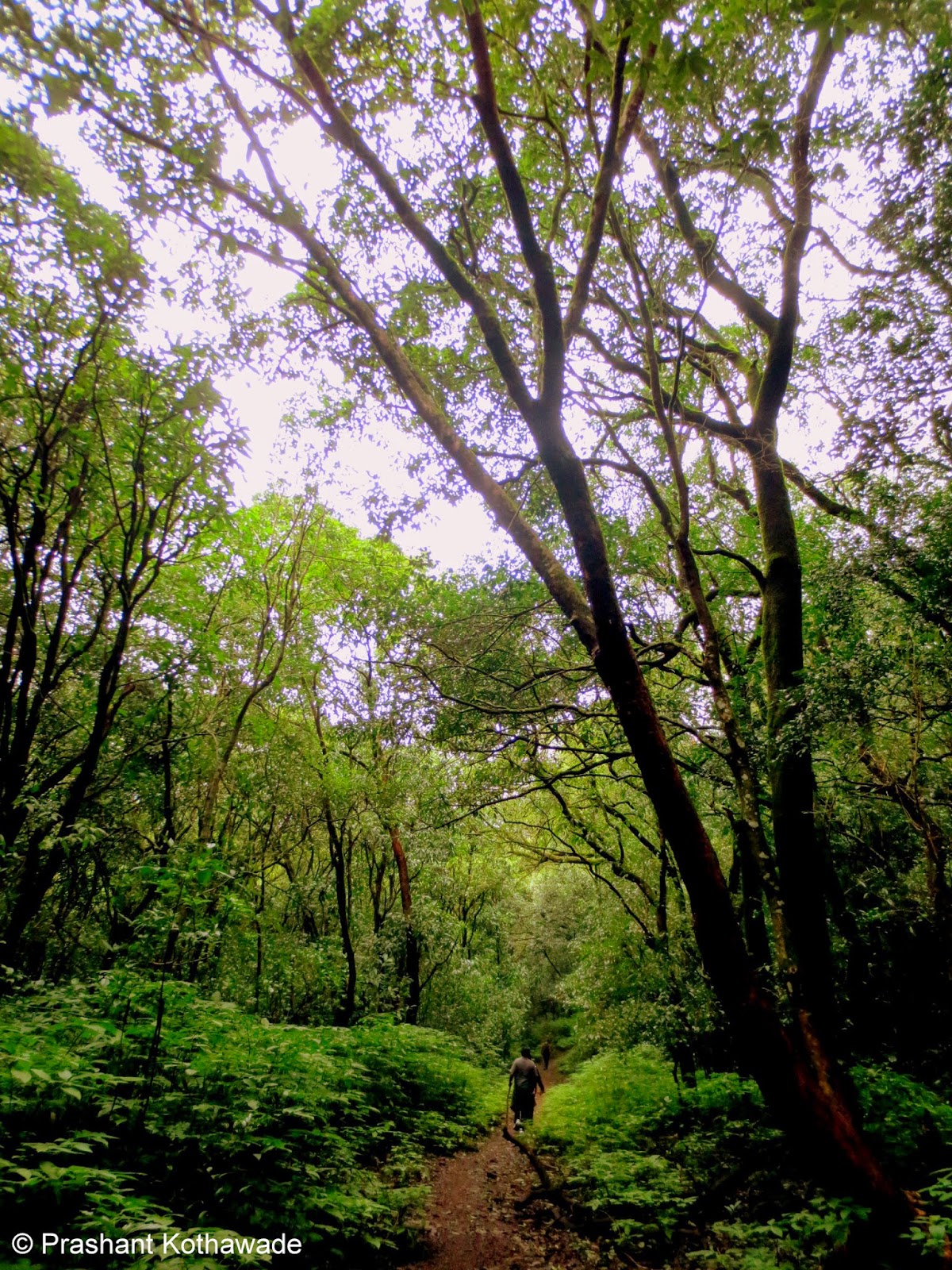 After crossing a stream of big boulders, we reached to Bhimashankar and we were greeted by the hoard of pilgrims, chanting mantras, bathing in the kund, standing religiously in queues to take darshan of God Shiva. It was 12.30 pm and we decided to stand in the queue to take darshan. We had to wait for about 45 minutes. Finally we entered the innermost part of the temple and quickly bowed our heads before being quickly ushered outside by the priest whose only job seemed to make sure that  no devotee would spend more than 5 seconds in front of the deity. 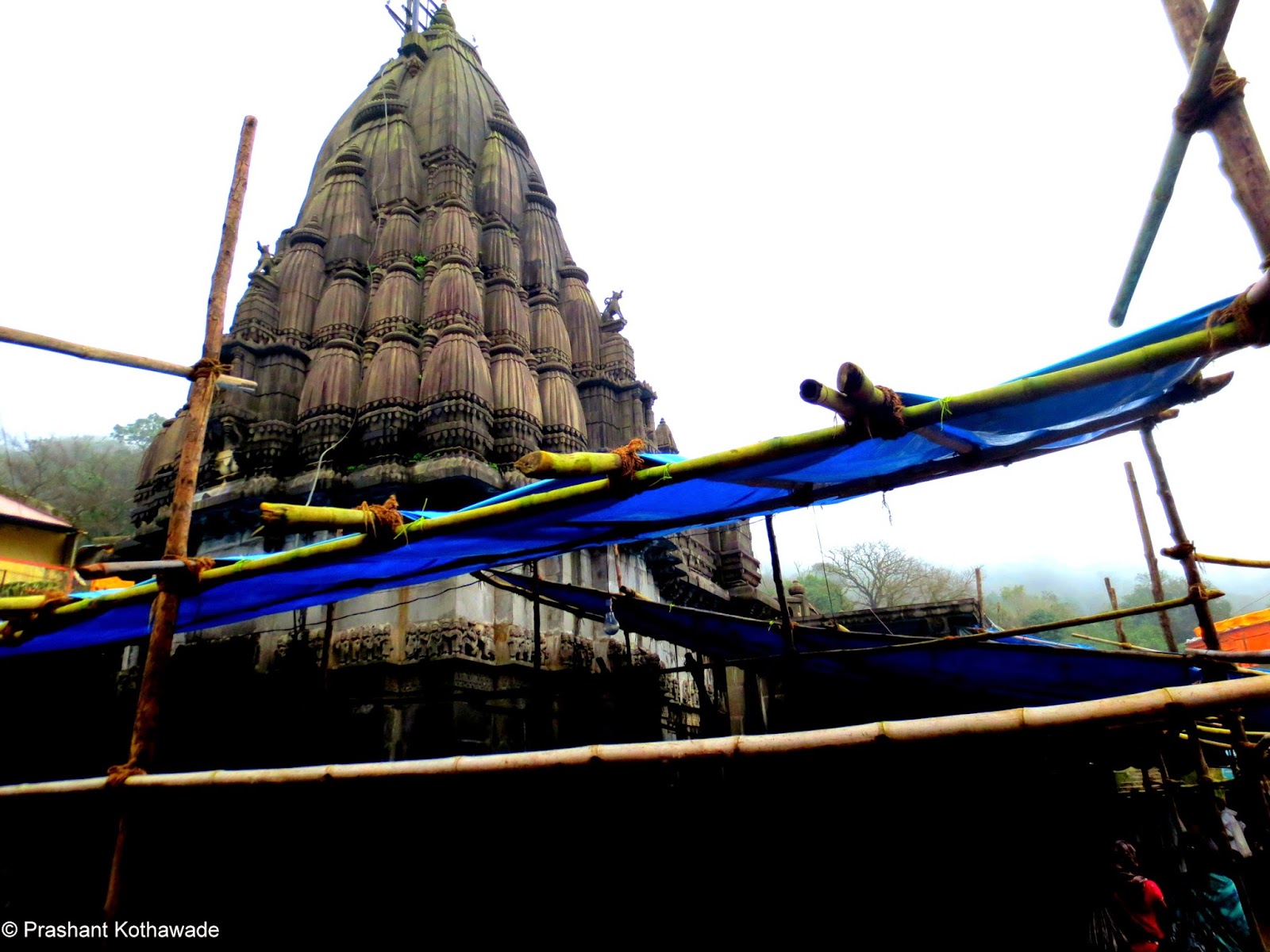 After coming outside of the temple, we rushed to find Kshitij restaurant suggested by Onkar Oak. After munching lunch followed by a hot ginger tea. we got the much needed warmth and energy and started descending towards Gutpa Bhimashankar, a secret Shivlinga tucked away in the dense forest.

There is a sign board attached to a big trunk of a tree indicating the direction of Gupta Bhimashankar. 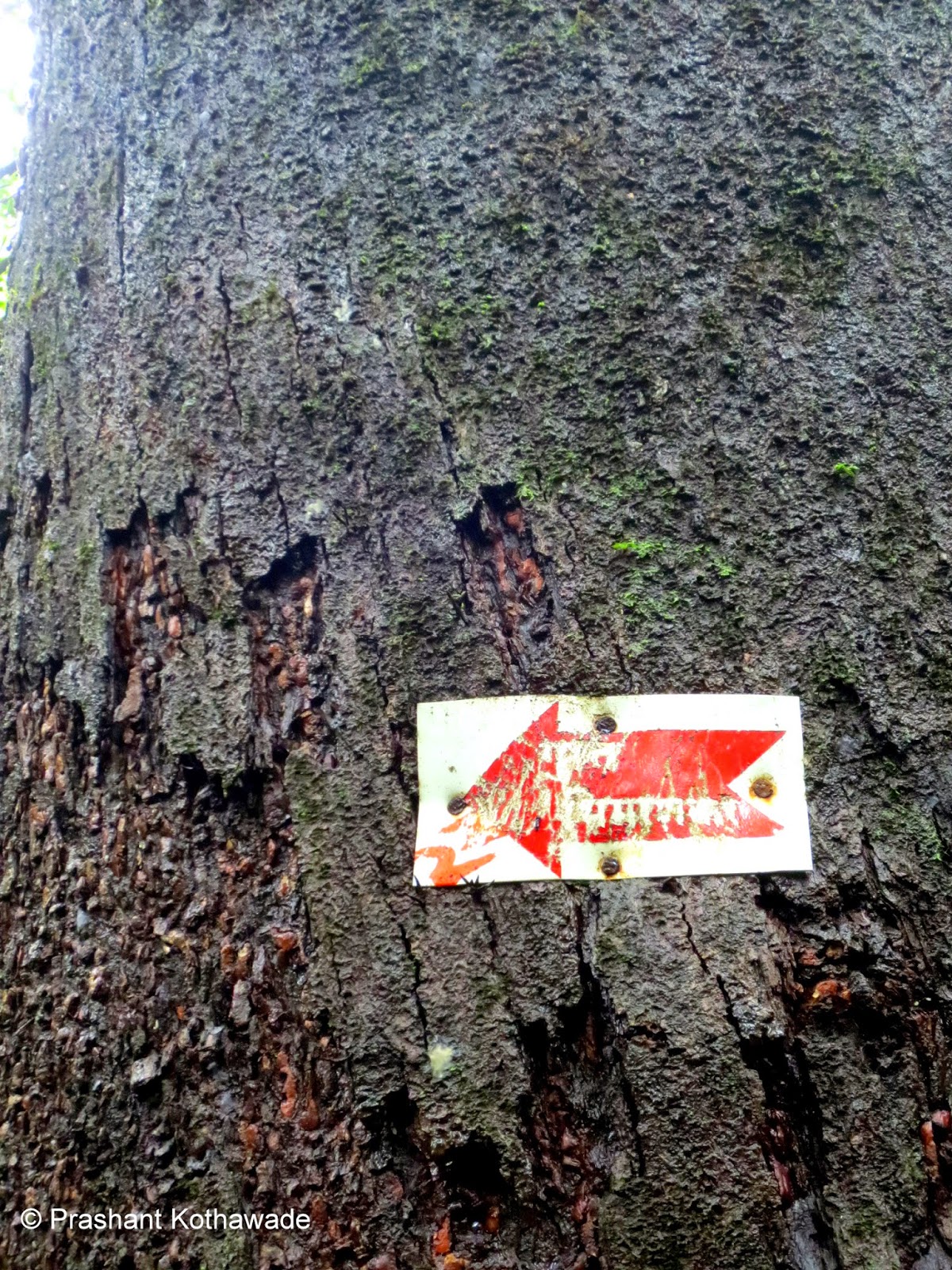 Again, the trail passes through a denser forest. As we were passing through the forest, loud noise of thumping water caught our attention. We followed the direction of a sound and were refreshed to see a medium sized waterfall falling merrily. Sameer and myself decided to go to the base; I gave up midway because my shoes were slipping on the wet rocks but Sameer went ahead and reached to the base of the waterfall. 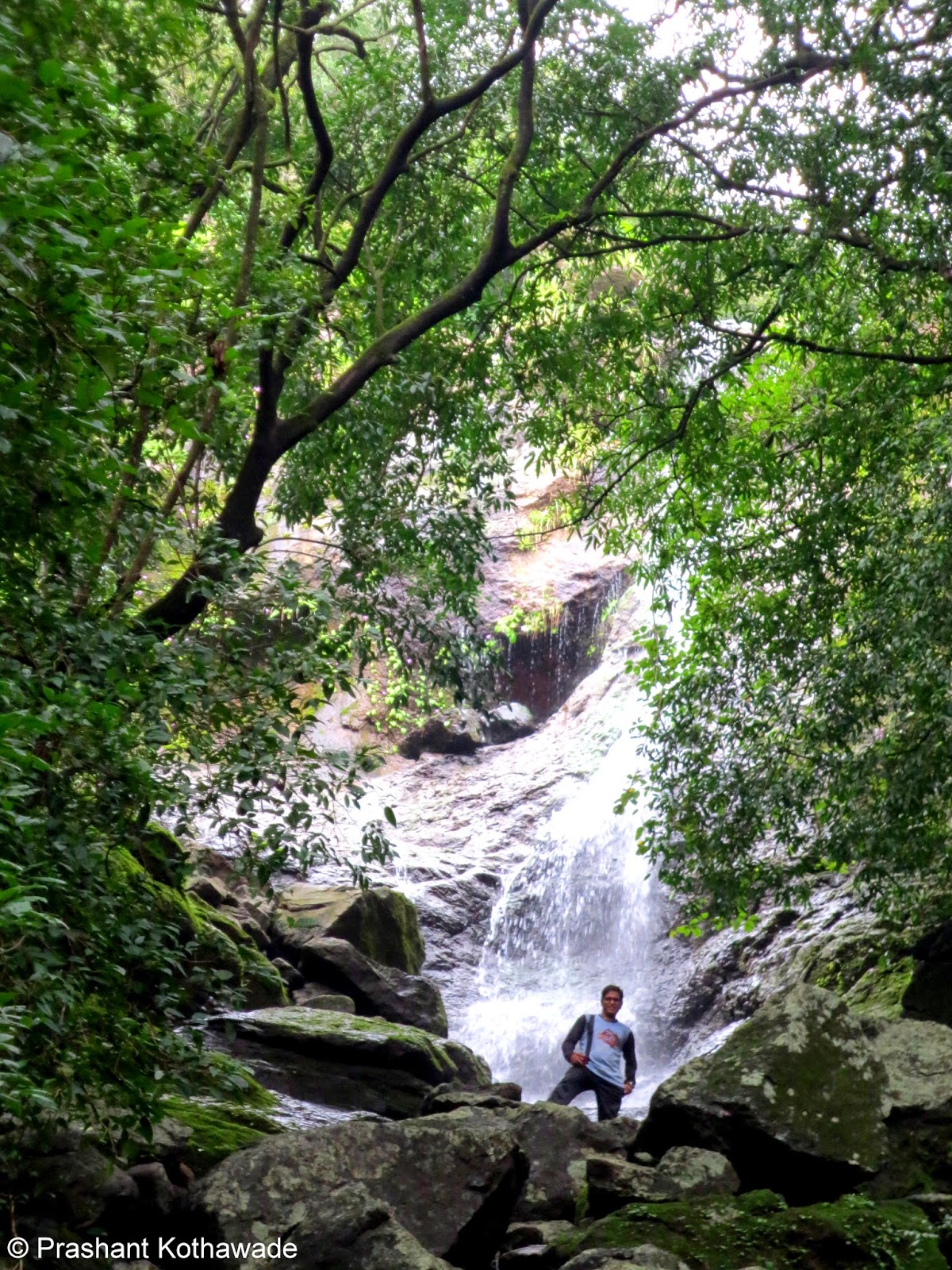 Soon, we came across a fallen gigantic tree and we clicked a group photo around it. 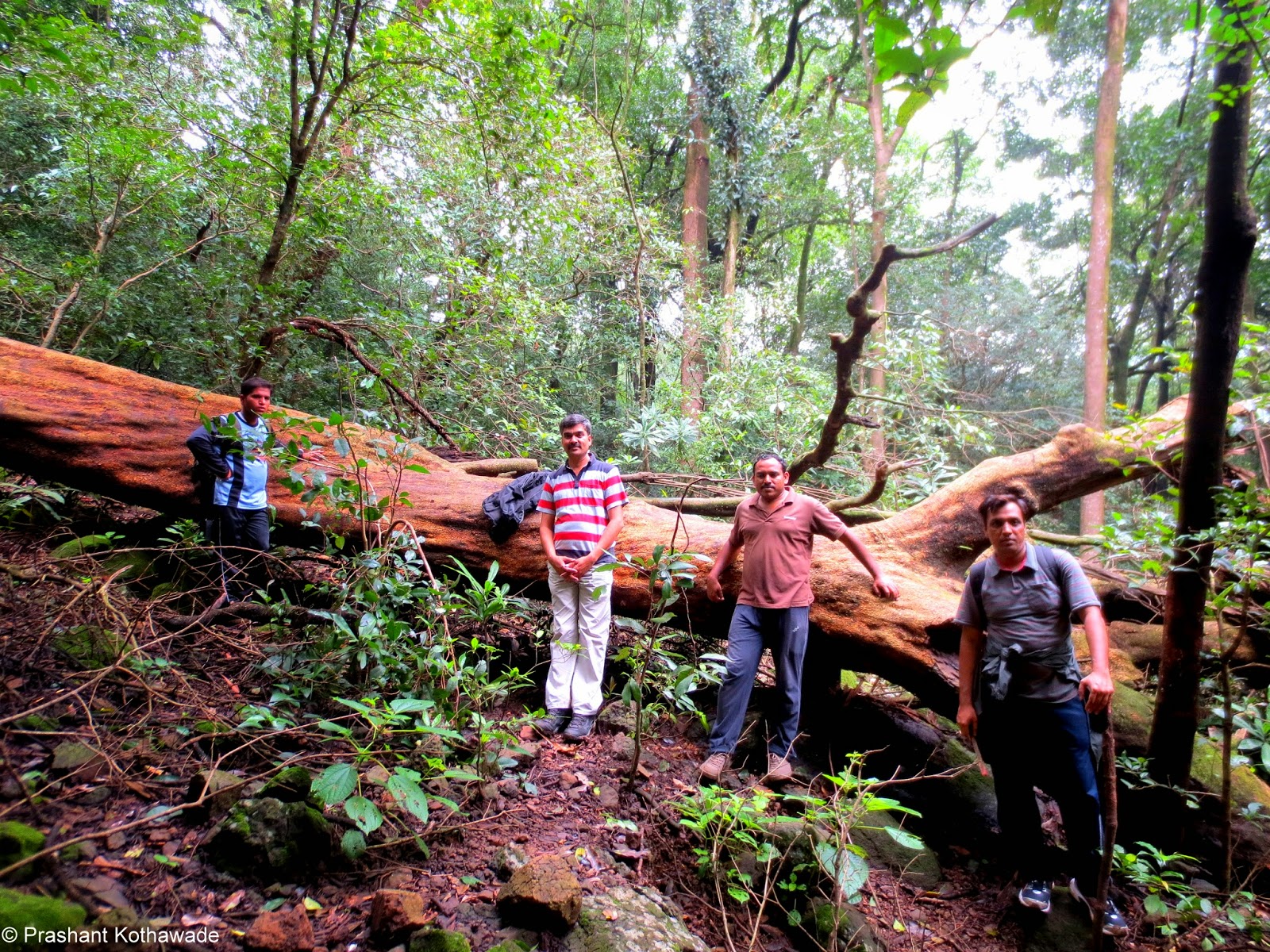 After trudging for few more minutes, we came across a small temple. 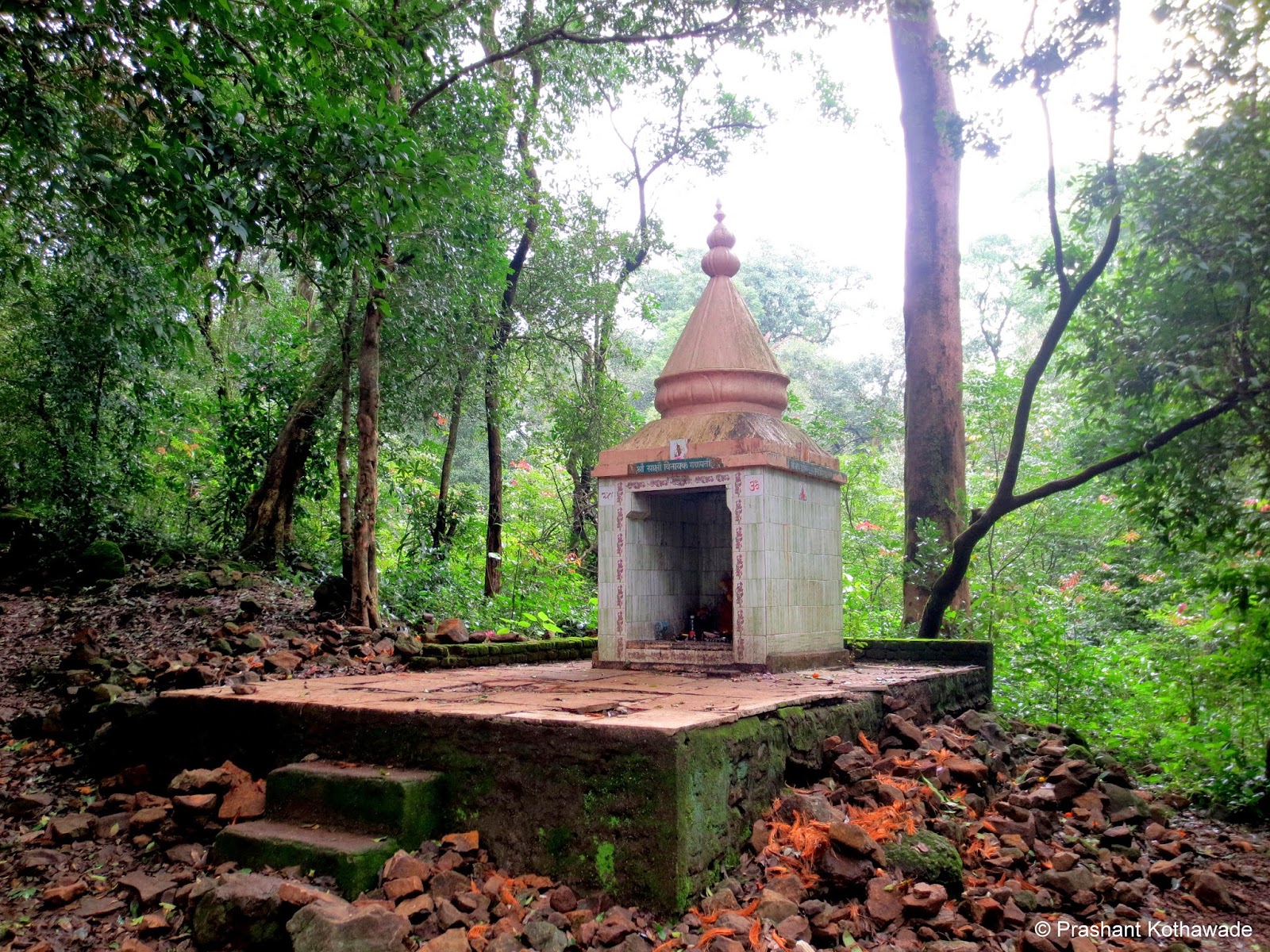 Soon, we came across a big stream which was getting transformed into a small waterfall. Gupta Bhimashankar lies at the base of this waterfall. Again some boulders are placed in the stream and you have to do some acrobats to reach to the other side of the stream. My HEAD shoes were deserting me throughout the trek and I had almost lost the confidence on the grip of the shoes. As I was planning my next jump from a rock, suddenly both of my feet slipped and I had a bad fall with few cuts on my palm which oozed some blood. I immediately removed my shoes and walked through the stream with bare feet. 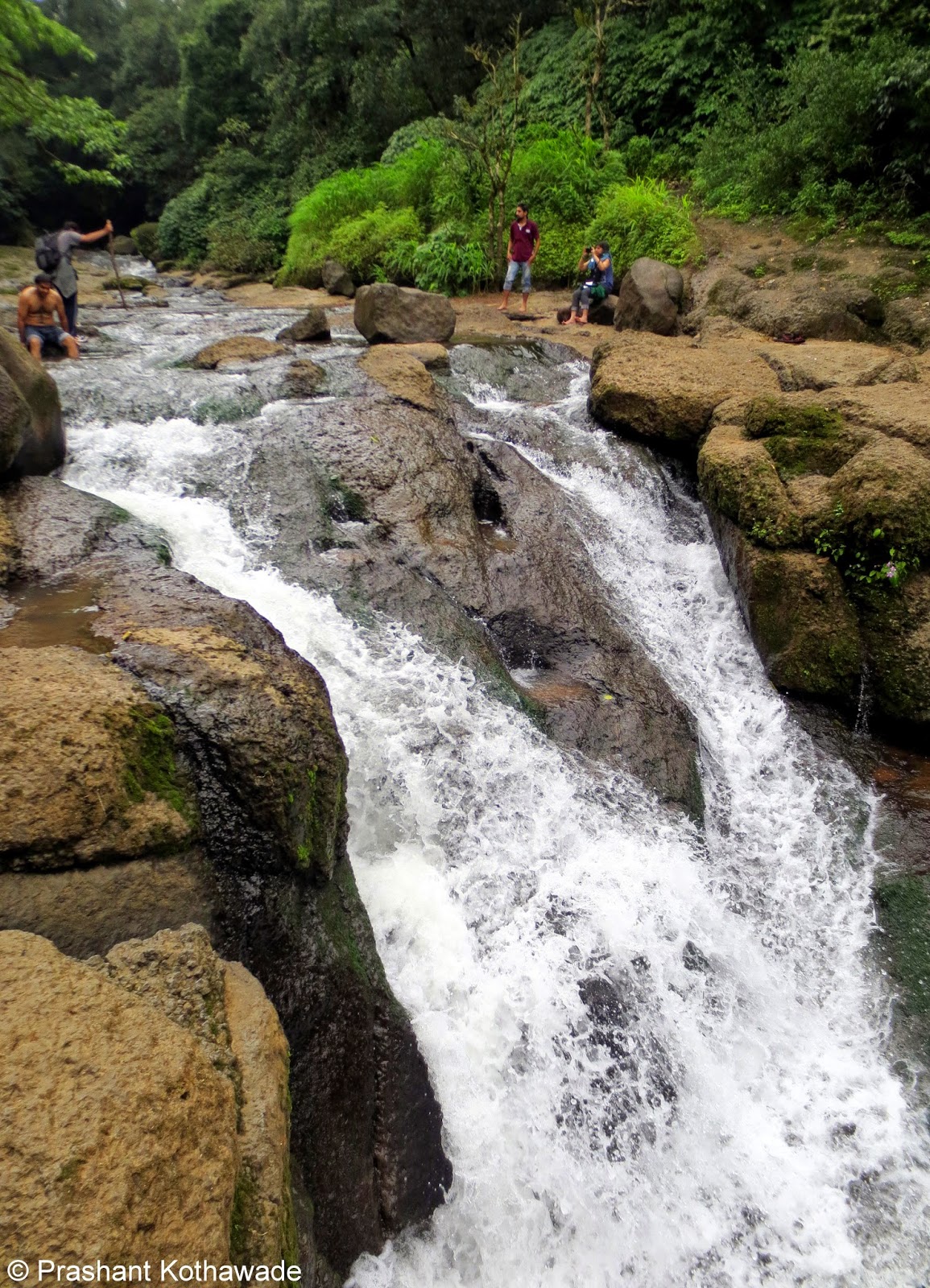 Soon, we were at the base of the waterfall and we were just wonder struck by the beautiful Shiv-Linga of Gupta Bhimashankar. Really one of the most amazing feelings! After spending few moments of real bliss in the presence of divine Gutpa Bhimashnkar and splendor of nature, we started our hike back to Bhorgiri. As local boy was our guide, he took us some shortcut from the dense forest and we joined back to the hiking trail. Looking back, we couldn't believe how we came out safely from the dense forest. This is where local guides really help. 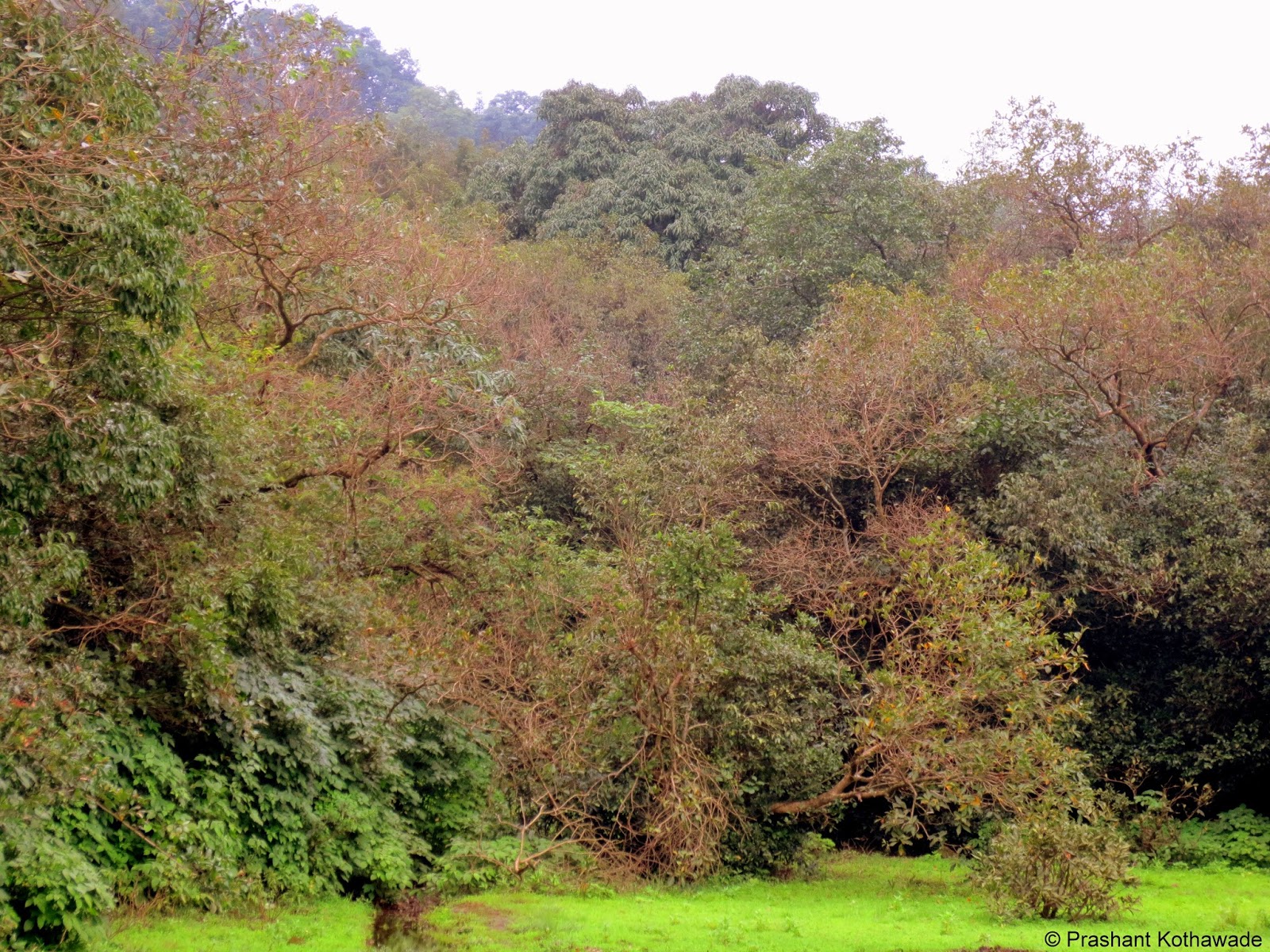 Along the way, we came across a snake which was resting on the trail as if it were dead. Probably it had eaten something and had got lethargic. Considering it may get killed by other hikers or it may cause harm to other passerby, we poked it gently using the stick and after a while, it coiled itself around branch of a small tree. Soon, we reached Bhorgiri village. Though legs were tired, we were determined to visit Bhorgiri Fort and we proceeded towards it. 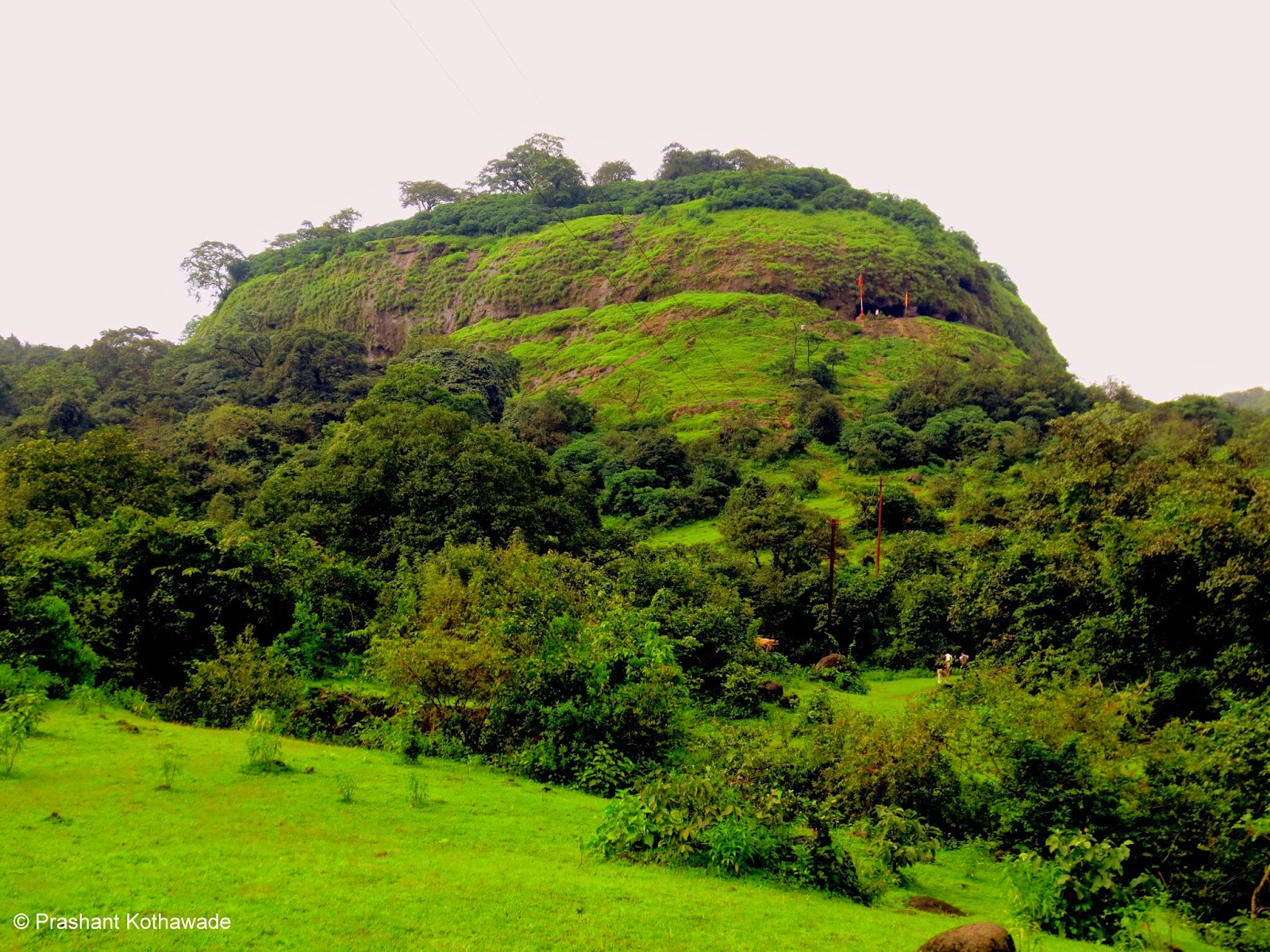 Soon, we reached to the cave where there is a small Shiva Temple. It was very serene there and we rested a bit. Sameer had brought home made  Gulab-Jamuns  and we couldn't have got a better place than this to feast on the desert. 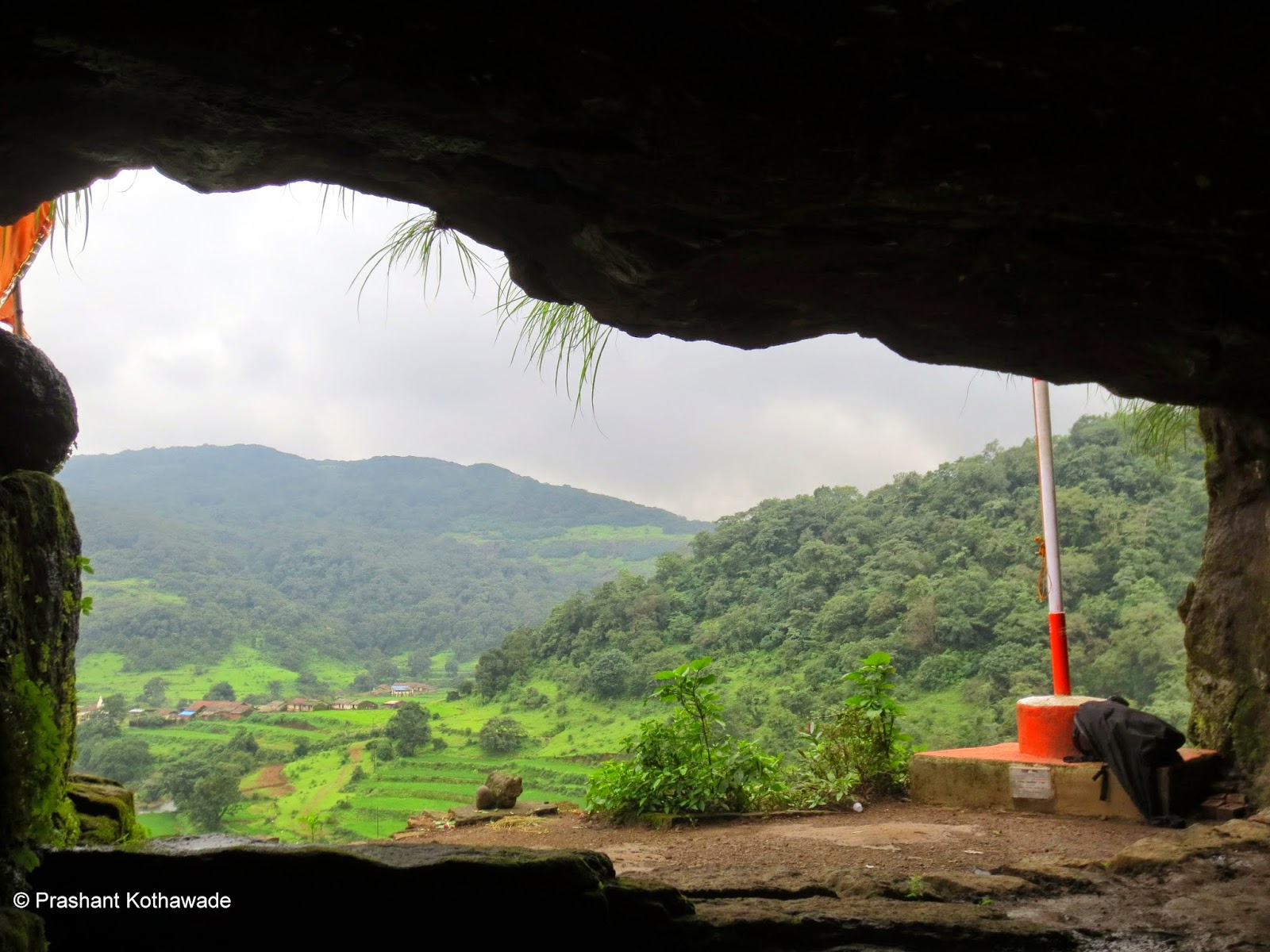 There is another cave just few meters away from this cave and it contains water tanks and a temple inside the water tank. This was again the sweet surprise. Though nobody was willing to enter the knee-deep water and walk for almost 20 ft inside the cave to reach to the idol, I and Milind decided to explore it with the help of Ajit and everybody followed the suit. It was again one of the most amazing feelings and after a while, we all came out, wore our shoes and started descending with a simpler route. 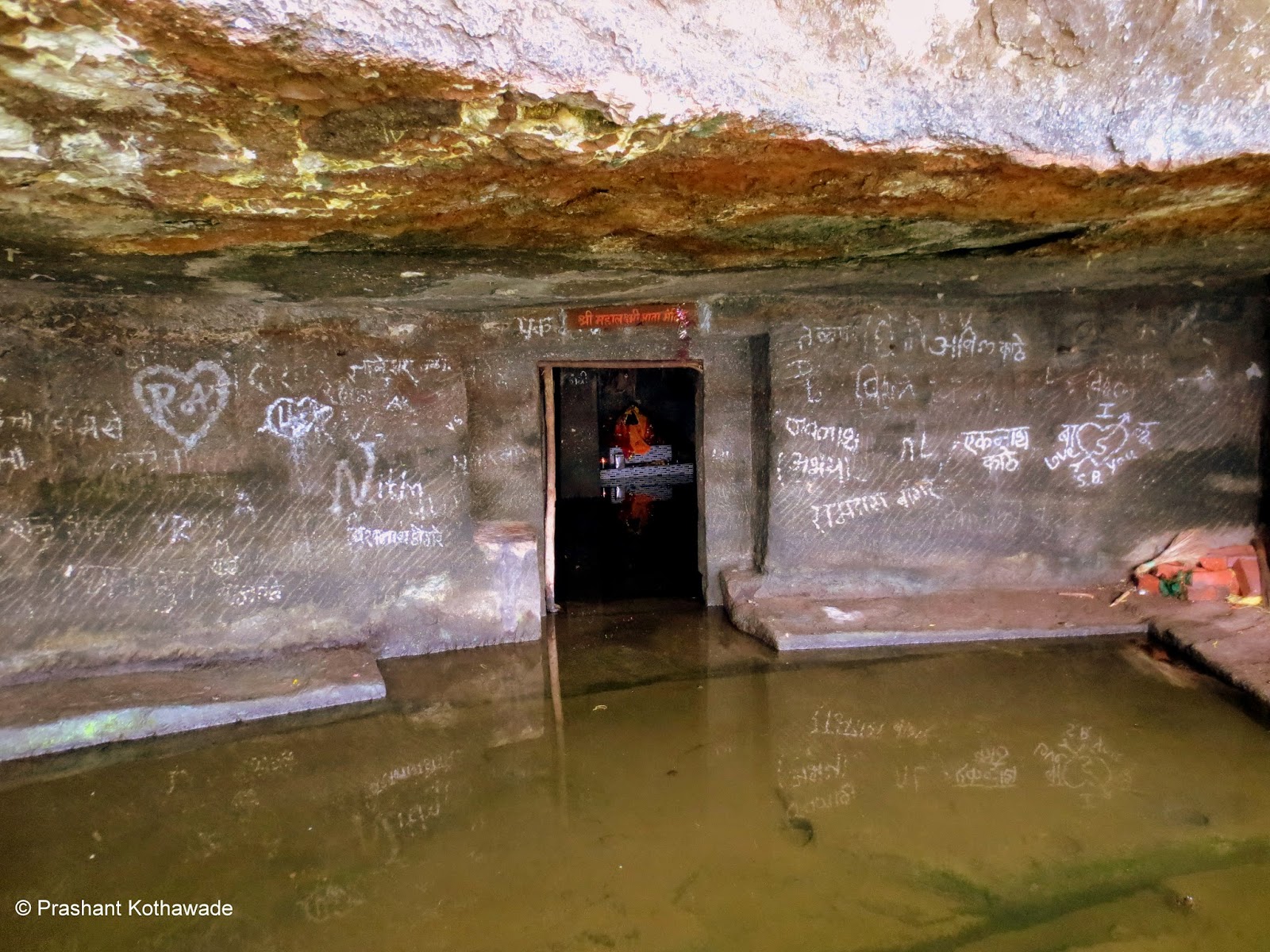 Soon, we reached to the village. Bhorgiri is a tiny village with very few houses. 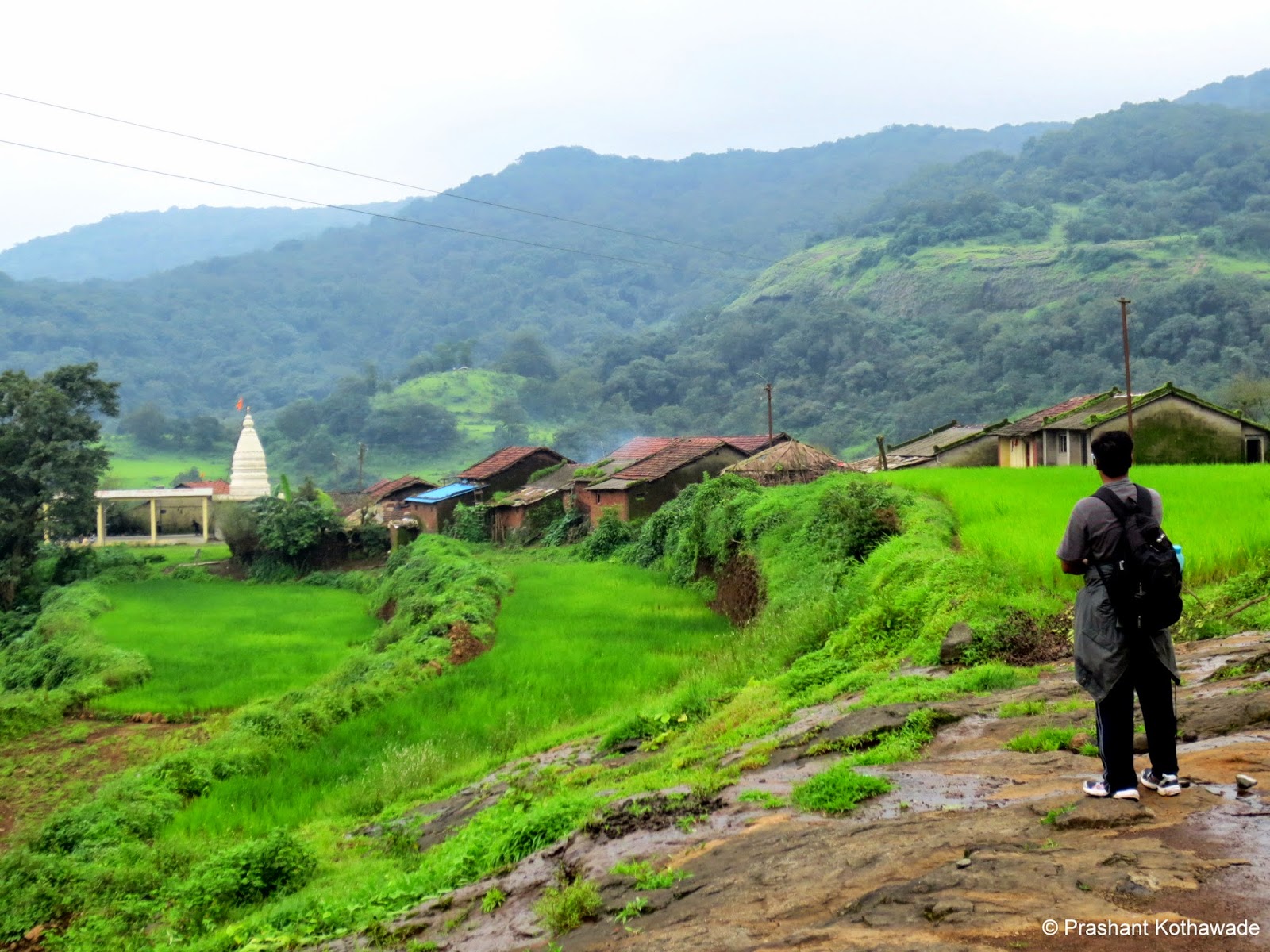 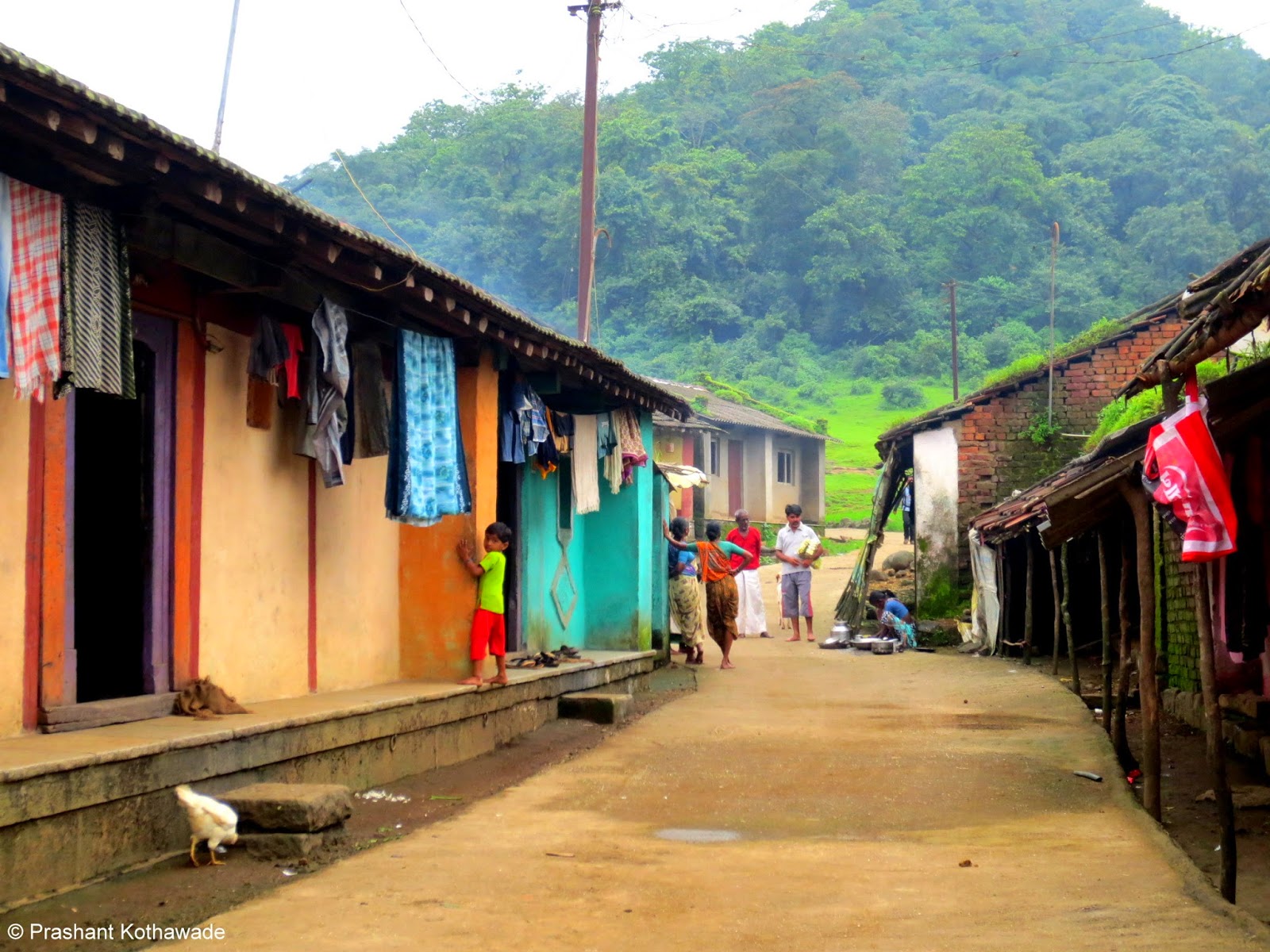 I talked to few villagers and photographed an elderly man who was sitting in front of his house. I was expecting the man to give a smile but sombre expressions on his face stirred my soul making me wonder if this man had really lived a tough life! 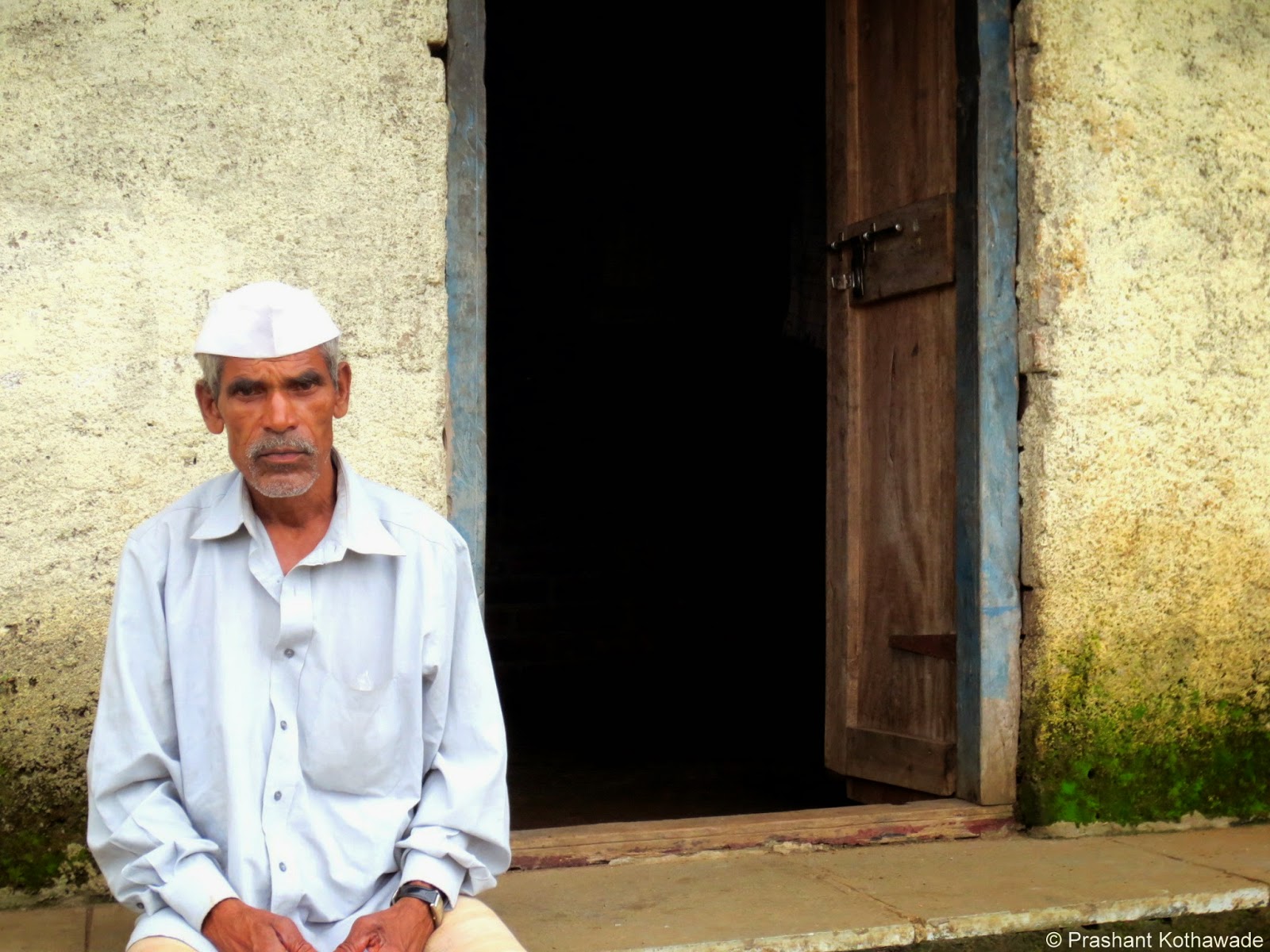 After reaching to our parking spot, we handed over Ajit his fees (300 Rs) as a guide,changed our clothes and rested outside the temple. Three small kids were playing in the premises of the temple and we offered them biscuits. As we had still many biscuits available, I asked them to call their friends and gradually there were almost dozen of kids. All seemed happy after receiving the biscuits and they were more than happy to pose for a group picture. Seeing the happy faces of these lovely kids was the fitting end of the trek and we started our journey back to Pune. 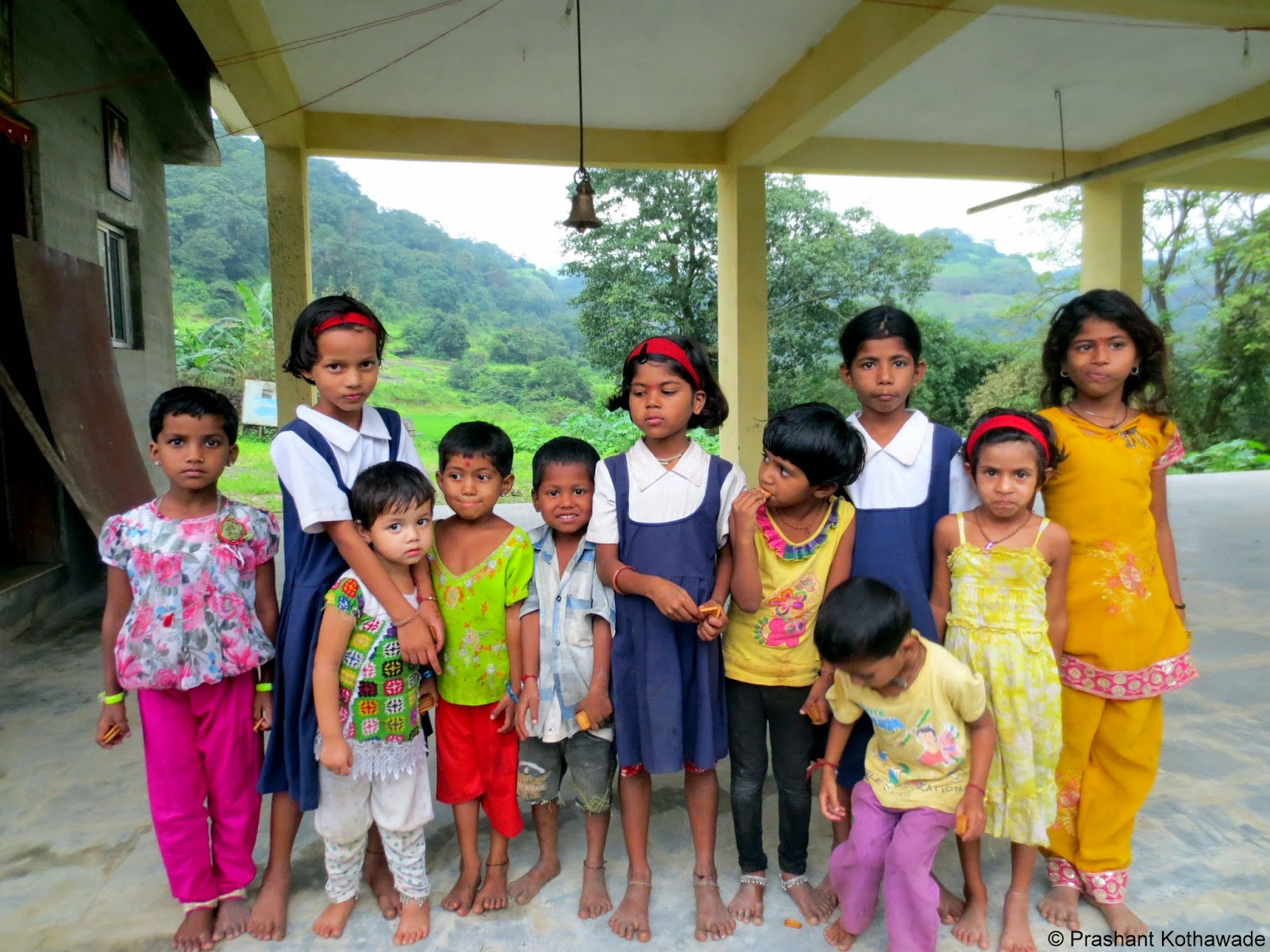 Along the way, we halted at Rajgurunagar for tea, called our respective families as we were out of mobile coverage all day along and finally reached to Pune around 9.30pm.


Exploring the wilderness of Bhimashankar Forest was a sheer divine experience. Sometimes nature just makes you speechless and spellbound with its beauty. As I am penning this post, fragrance of woods of Bhimashankar seems still fresh in the nose, melody of gushing water of the streams still seems musical to the ears and sights of the giant Malabar Squirrel still brings a rapturous smile on the face.

Special thanks to "Onkar Oak" whose inputs helped me plan this hike perfectly.