﻿
﻿ ﻿﻿﻿
Visapur fort at an height of 3556 ft from the sea level, is a hill fort located in Pune district, 2.5 km from Malavali Railway station. It is part of Lohagad-Visapur fortification and is higher and larger than Lohagad fort. It was built during 1713-1720 CE by Balaji Vishwanath, the first Peshwa of Maratha Empire. This fort is not easily accessible because of the misleading paths.

I joined TrekRoots group who had organised this trek on 23rd June 2013. We gathered at Shivajinagar Railway station at 6 AM on Sunday morning. Our plan was to catch Lonavala local train to reach to Malavali station and trek our way to Visapur. Since I was trekking with this group for the first time, I introduced myself with few of the members on the railway platform. Local train arrived on time and we reached to Malavali station around 8 AM.

It was a beautiful morning when we reached to Malavali. Once you reach to Malavli, you need to cross a bridge built on top of Mumbai-Pune expressway to proceed to Bhaje.

Start of walk towards Bhaje: 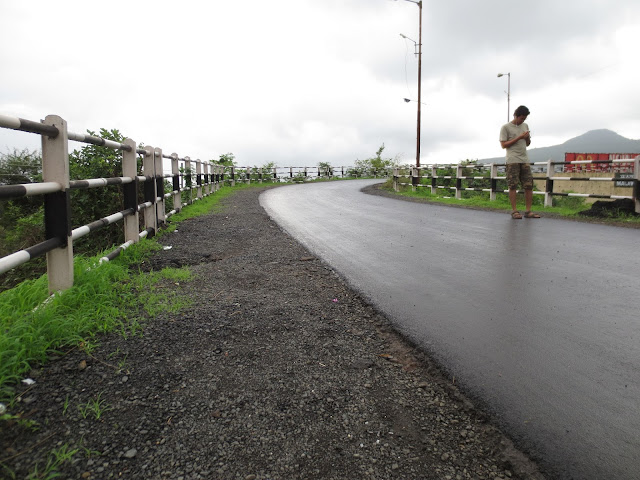 ﻿﻿
Rain was playing hide and seek while walking. Soon we reached to Bhaje village where we had a breakfast of Poha and Tea. The food joint was very crowded and we had to wait for several minutes for our turn. 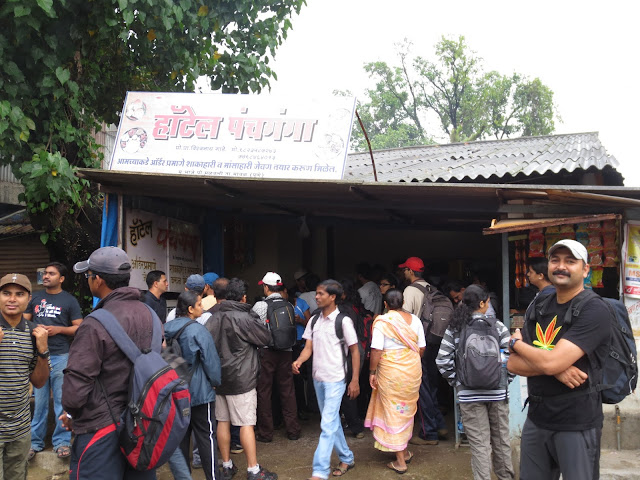 Soon, it was time to visit Bhaje caves. Along the way, there is a beautiful waterfall.Many of the tourists flock this waterfall on weekends in the rainy season. Interestingly, local villagers use it for washing the clothes.

After crossing the waterfall, you come across a sign board indicating the direction of Bhaje caves. You need to climb flight of steps to reach to a ticket counter where you need to buy tickets (Rs. 5 per head) to visit Bhaje Caves.

Absolute stunning Bhaje Caves which are a group of 22 rock-cut caves dating back to 200 BC:
﻿
There are three to four known routes available to reach to Visapur fort. First goes from Bhaje Caves, second goes from Gaimukh Khind and third goes from the base village Patangaon.

It was lush green everywhere when we started our trek. As we had a large group, we took frequent stops to wait for other members to join us. 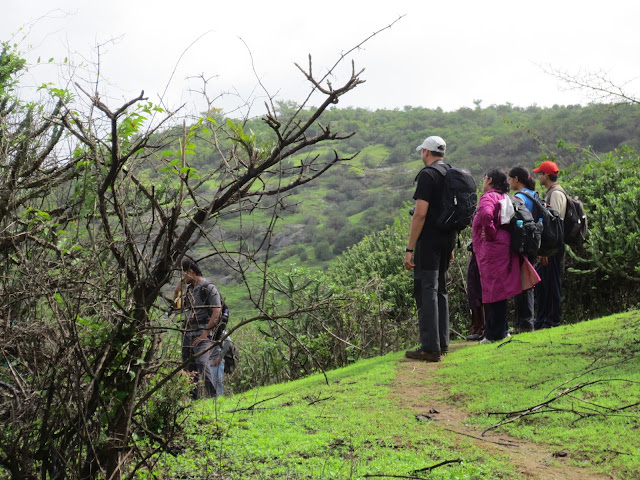 I spotted a deer while I was taking some snaps. But it appeared and disappeared in a flash and I missed the chance of taking a snap of it. Nevertheless, it was exciting to spot a deer in the wild.

There was a point from where we got stunning view of Visapur and Lohagad side by side.﻿


﻿After climbing the hill, we came across a flat terrain with an abandoned hut.

Bhatrashi Peak was looking fantastic along the way.
﻿
After a while, the path led us to thick bushes. There were two paths and our leader, Nirant Sardar confirmed correct path after checking out the both.

You need to go to the Eastern face of the fort by traversing the hill and this route goes through dense forest. 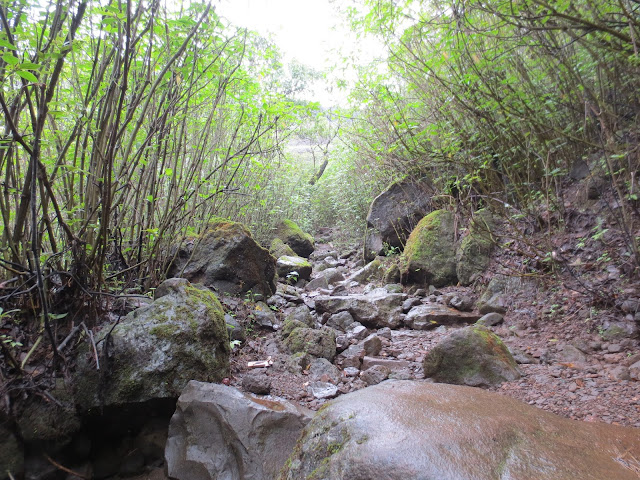 This path later joins to a stream with large boulders. You need to climb through this stream to reach to top of fort.
﻿
﻿ 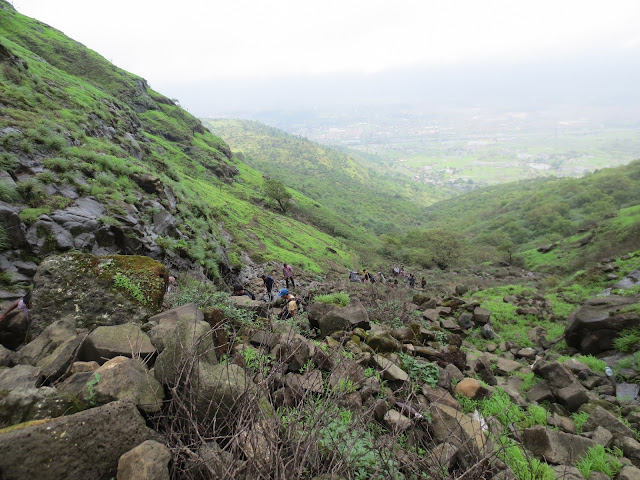 Once you complete your climb through the stream, you come across a beautiful Hanuman Carving along the sides of caves.

Once you climb these steps, you can see the top of Visapur. 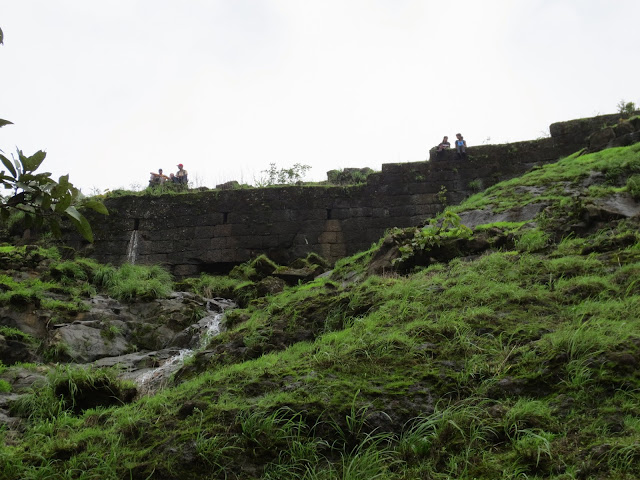 Once on the fort, you can spot many water cisterns, a big grinding wheel, Hanuman carving, ruins of food granary and Peshawa palace on the fort. Fortification of this fort is still intact. Also, there is a large plateau which you will observe rarely on any other forts.

Fortification of the fort is still intact on the Western side.
You can get stunning views from the top.

On the South side, you can get spectacular views of Pavna Dam with Tung fort on right and Tikona on left. As it was cloudy, I did not get clear photograph of Tung and Tikona but you can still locate the forts in the picture below.

You need to take each step carefully while descending. In monsoon, stones may get really slippery. 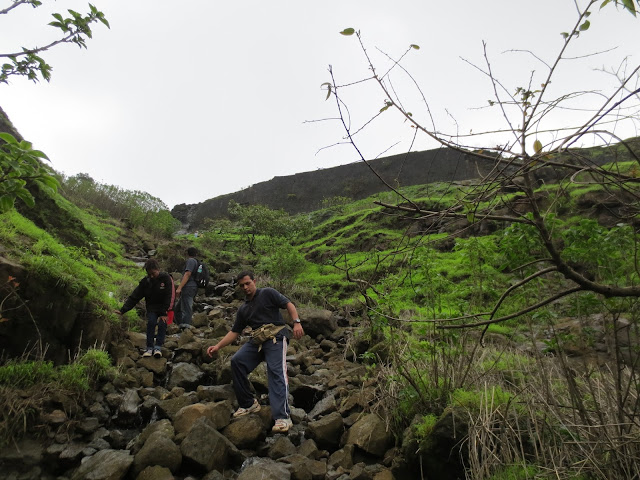 After descending from the stream, we took the dirt path from the thicket.This short walk reminded me of the jungle walk while reaching to Vasota fort. 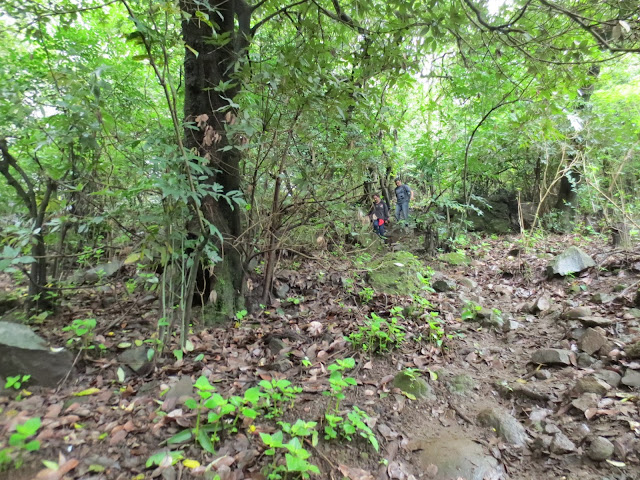 Soon we reached to a little hut where we had our tea. 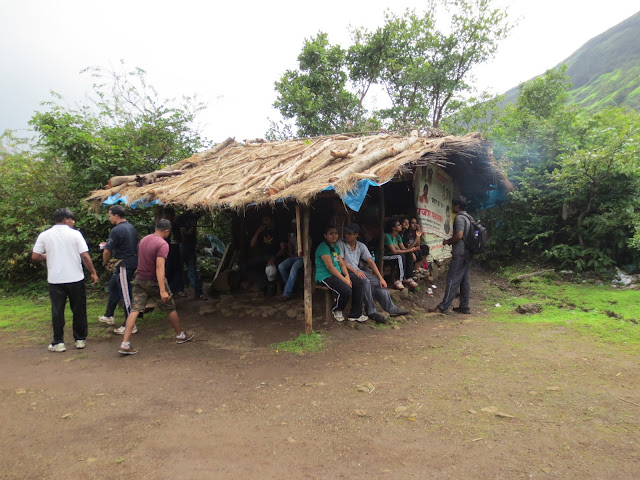 We walked further and soon joined the road which goes back to Bhaje village.
Some tourists were enjoying the crazy game of Kabbadi. Lohagad can be seen in the background. 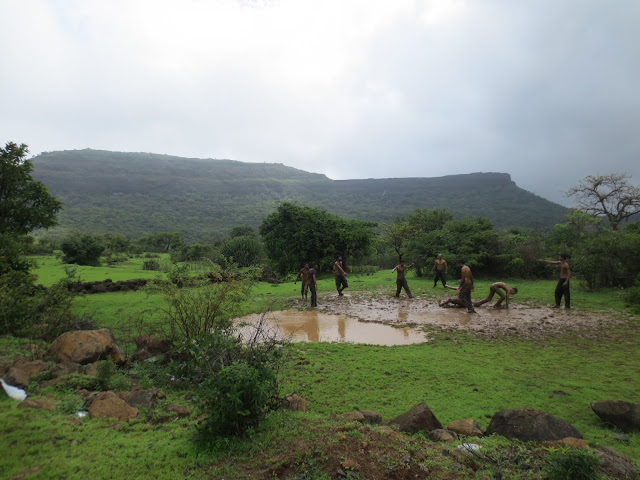 After crossing the Bhaje village, there is a beautiful temple.

We reached to Malavali railway station around 4.45 PM and further had tea and snacks as next local train was at 5.30PM. Train arrived almost 20 minutes late and we boarded the train which was very crowded. Probably a lot of people were reaching back to Pune after enjoying Sunday from Lonavala. We were already very tired and we further needed to stand at one place for more than 90 minutes. Finally we reached to Shivajinagar around 7.30PM. We reassembled at Shivajinagar railway station to bid adieu to each other and proceeded towards our homes.

Overall, this trek was one of the most memorable treks. Unusual route to reach on top of fort, strong fortification of the fort, beautiful Hanuman carvings on the fort, stunning views of Tung, Tikona and Lohagad forts from the top and beautiful weather throughout the trek made it a pleasant affair. Add to it, I got some new friends and got acquainted with some amazing trekkers from TrekRoots group.

Tips for the trekkers: