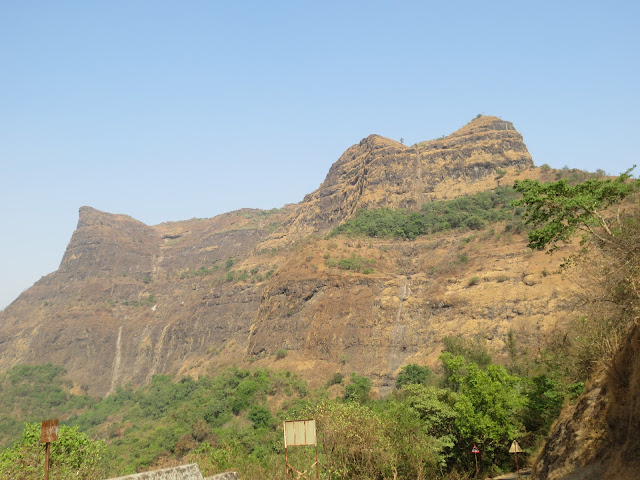 Raigad is a hill fortress situated near Mahad, Raigad district of Maharashtra.It was the capital of the most illustrious Maratha sovereign, nurtured by Chatrapati Shivaji Maharaj. The fort, which rises above 820 metres (2,700 ft) above sea level, is located in the Sahyadri range. There are approximately 1737 steps leading to the fort. The fort was looted and destroyed by the British upon siege.

I joined this overnight trek organized by my WTA friends and we were total 32 people attending the same. One positive thing while going with a large group is that you get to meet a lot of people of varied background and at the end of the trek, you form ever-lasting friendships!

We left Pune around 6.45 PM in a private mini-bus. We reached to Mangaon via Tamhini Ghat and waited for an hour for our Mumbai group who were coming by public bus. Initially our plan was to have dinner on top of Raigad but many of the group members had the fast next day and we decided to finish our dinner before 12 AM. As there was still some time left for our Mumbai group to join us, we finished our packed dinner in front of Mangoan bus stand.

Finally our Mumbai group joined us and we left for Raigad. We reached at the base village Raigadwadi around 1 AM. We were behind schedule by almost 3 hours! We started our trek around 1.15AM with gorgeous moon above and we did not need to switch on our torches or camera batteries even at once.

Photo captured by Sagar Manore who is our expert in Moon photography: 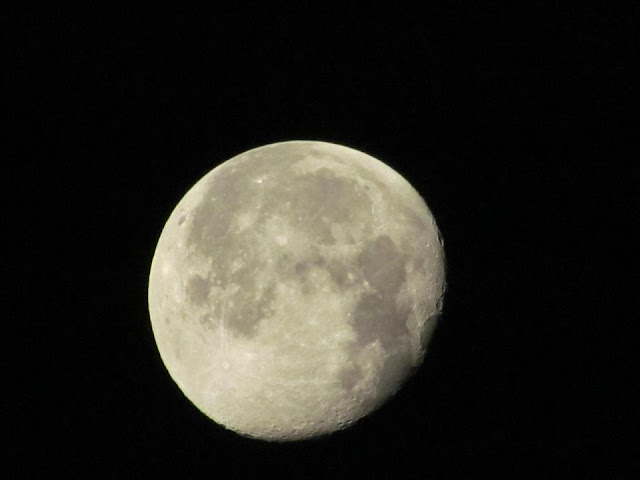 After walking for almost 1.15 hrs, we reached to Maha Darvaja (Main entrance of the fort) through which moon was looking radiant. 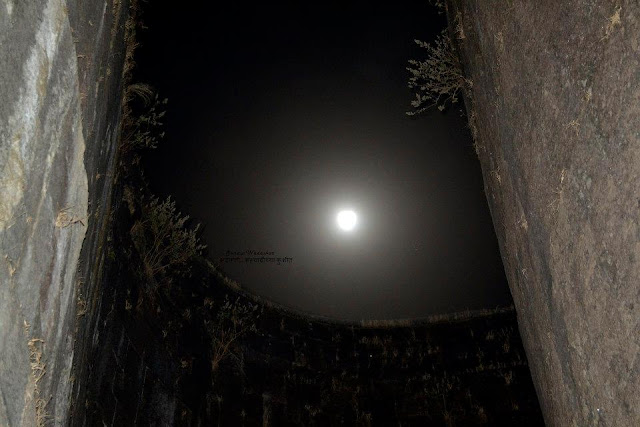 Finally we reached on top of Raigad around 3 AM. As we wanted to get up early, we immediately went to sleep in front of the dormitory. As I had hard time in sleeping in front of the temple on Rohida trek earlier week, I was well prepared and had purchased a brand new Wildcraft sleeping bag so as to sleep comfortably. Unfortunately, though I had a cosy sleeping bag to sleep, there was hardly any time to sleep. I hardly slept for 2 hours and got up around 5.45AM. After finishing early morning chores, some of us reached to a place named “Holi cha Mal” to witness the sunrise.

We spent 15-20 minutes there waiting for the sunrise but sun was not yet ready to come up. As we had to start early for fort exploration, some of the team members left for the breakfast. I was determined not to miss the sunrise and stayed back along with Prasanna for a while.

Gradually sun rose gently from behind Torna fort and what a breathtaking sight that was! 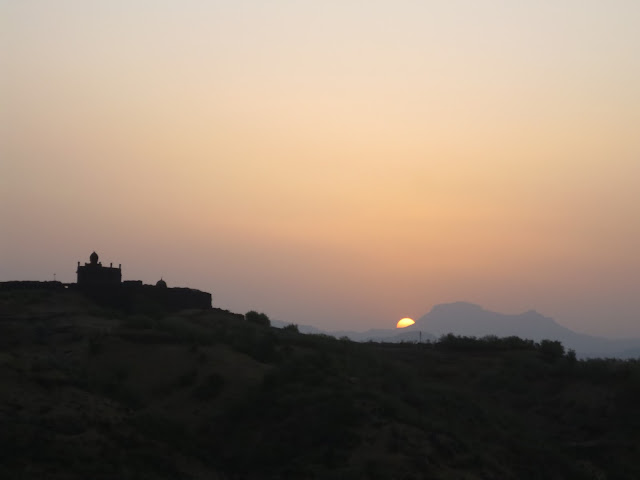 There is something wonderful about the photo shoot. You start noticing the things that you otherwise seldom notice. I was searching for some foreground objects to make sunrise appear more beautiful and I spotted a small tree to put it in the foreground. 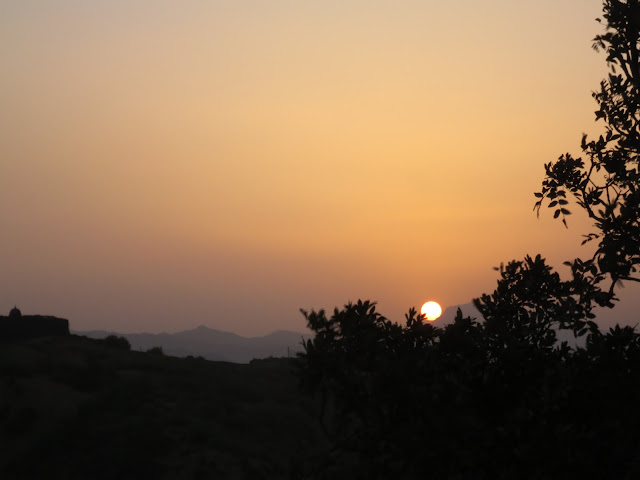 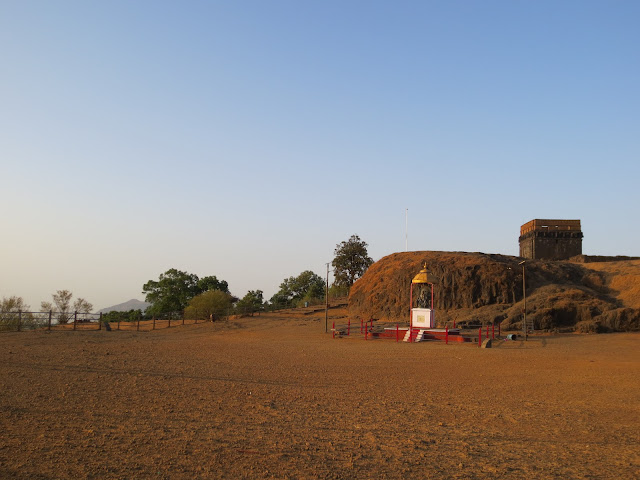 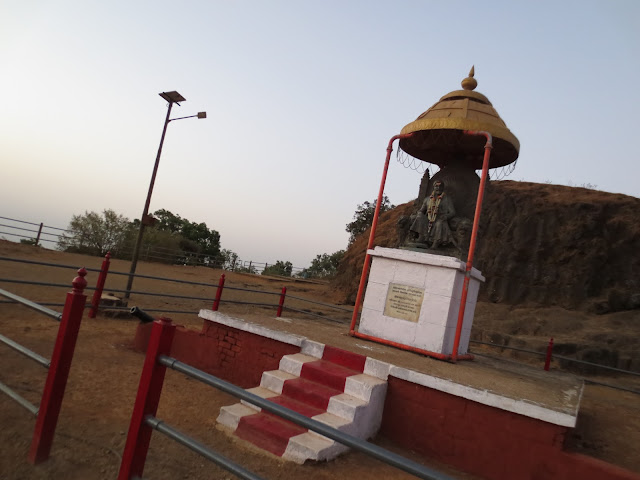 In front of the Holi Cha Mal, there is a marketplace which is spacious and built on a high plinth. It is said that people used to shop on the horses during older days. The road from here leads us to Jagdishwar Temple and Bhavani Tok. 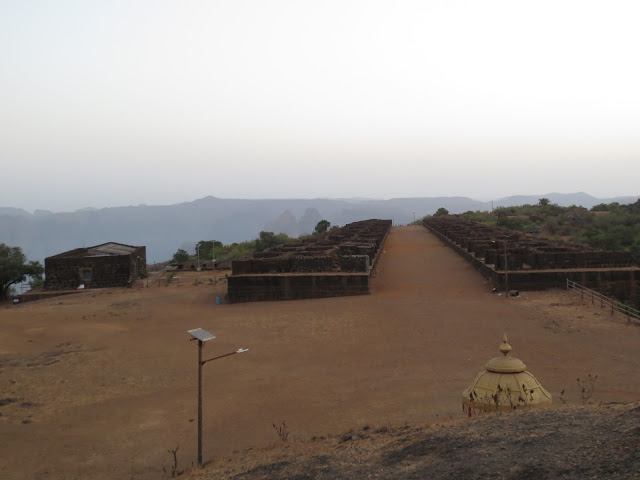 Near the Holi cha Mal, there is a small temple of Shirkai Bhavani - a presiding deity of the Fort: 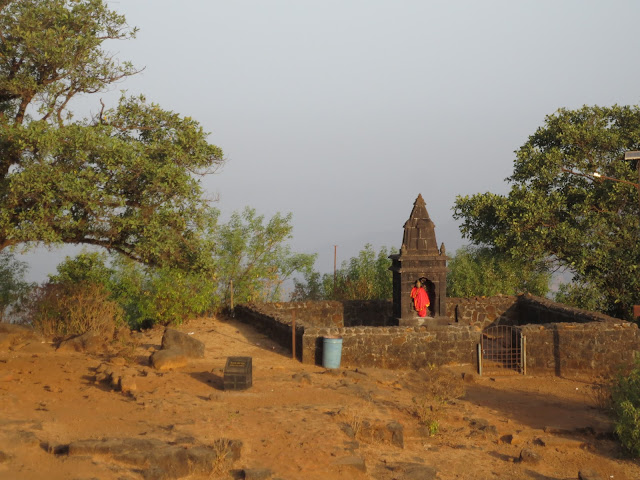 After the sunrise, we had a nice breakfast of Poha and Tea and then departed to visit different places on Raigad. As we had quite a large group, we divided ourselves in different groups. I was very eager to explore Raigad and went first along with Nikhil and 2 other members. Our first visiting spot was Bhavani Tok which is the farthest point on the East Side. You need to walk for half an hour to reach to Bhavani Tok. Pathway to Bhavani Tok was beautiful and we got stunning views of Sahyadri all around. 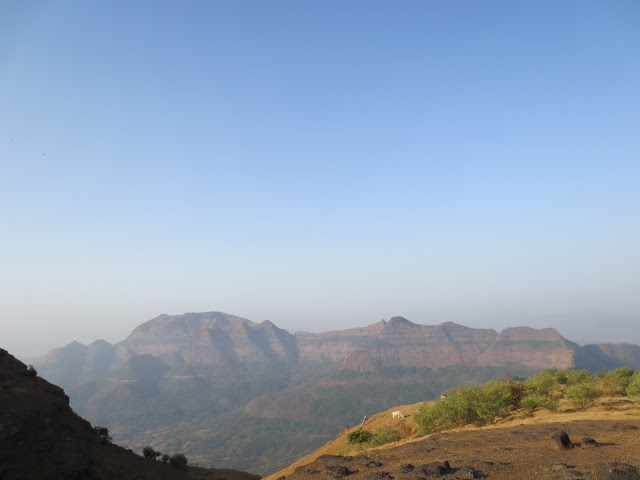 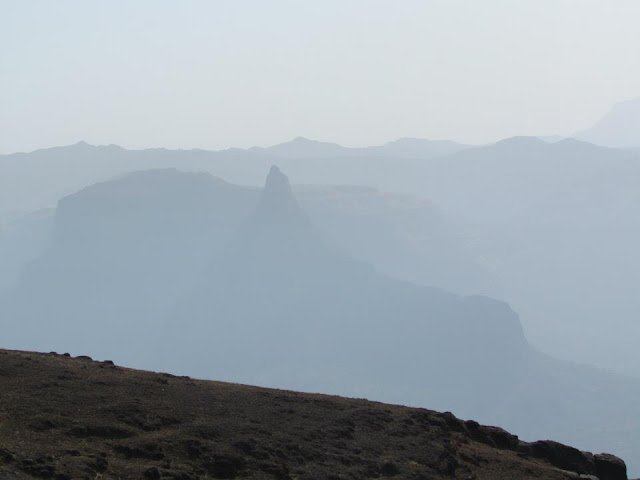 We reached to Bhavani Tok soon. After that we proceeded to visit Bhavani Temple. Route to Bhavani Temple is dangerous. There is hardly 1-2 feet passage with almost straight deep valley on one side. We needed to be extra cautious with each and every step.

Start of route to Bhavani Temple 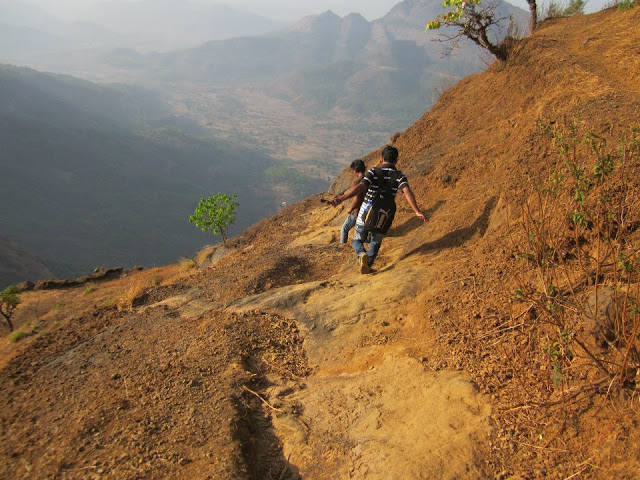 Finally, after overcoming the dangerous route, we reached to Bhavani Temple. 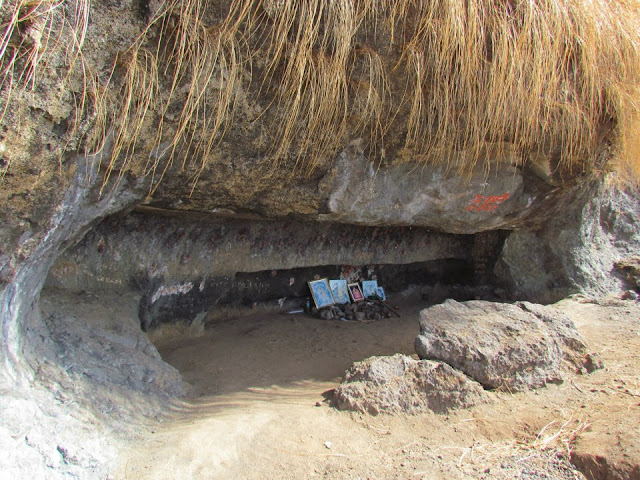 It was very serene with no one around and we just reveled at the marvelous sites of Sahydari. 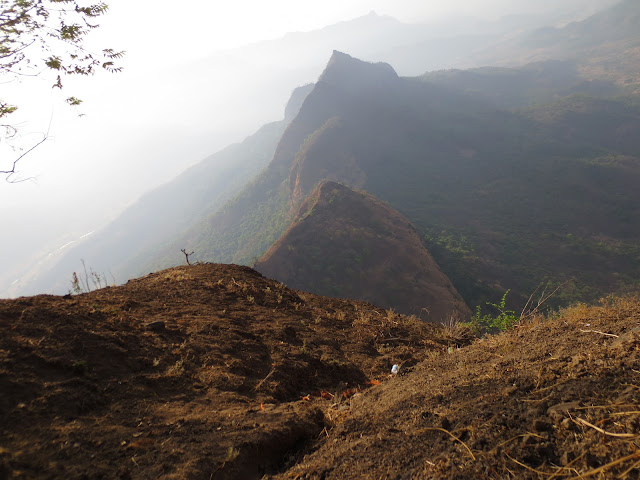 It was becoming hotter and hotter with absolutely no breeze. Along the way, we had plenty of water which had also become lukewarm. These were tough and challenging moments. Finally, we made it at the base. From the base, I clicked the Khoob Ladha Buruj - a strategically located tower, from where any attack from both the sides could be defended. 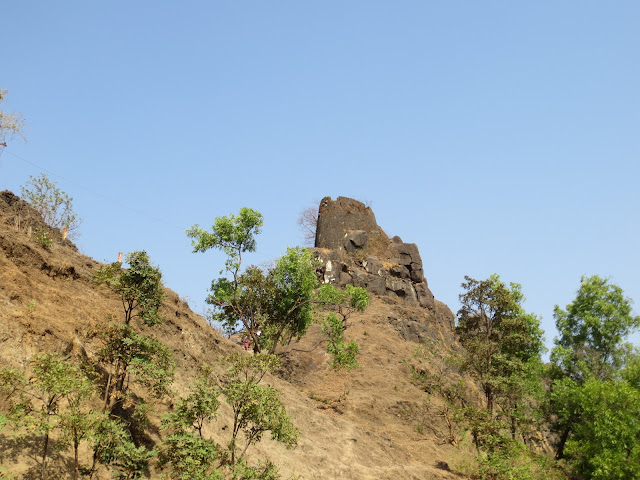 Sandip and Co. were already down and chose a road under the shadow to take a well-deserved rest. 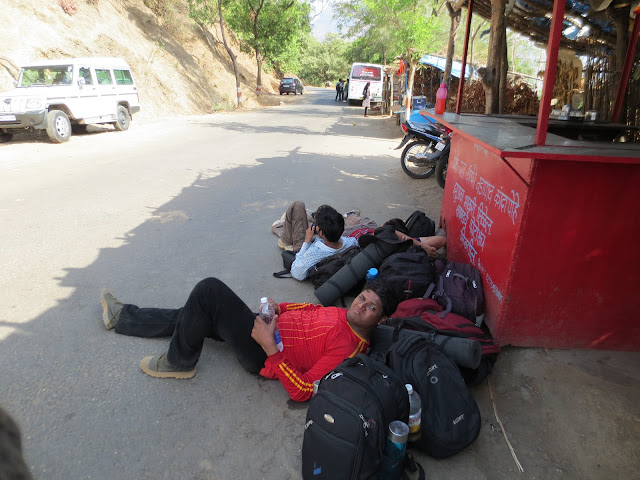 Rupesh showed his love for monkeys and fed chips to a monkey. Thanks to Sandip for capturing this unforgettable moment! 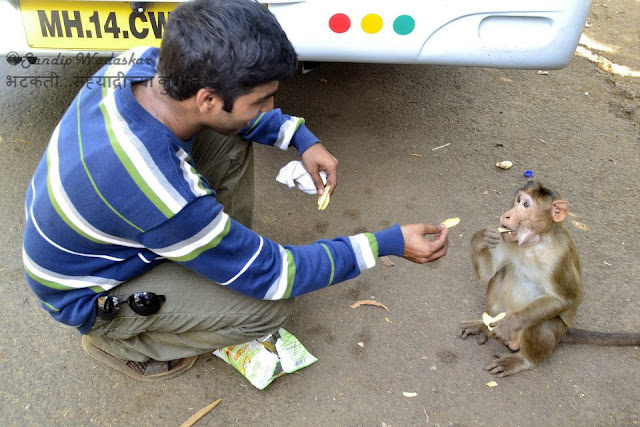 Finally, all came down one by one and we were ready to depart. Our cosy bus was waiting for us to take us back to Pune. 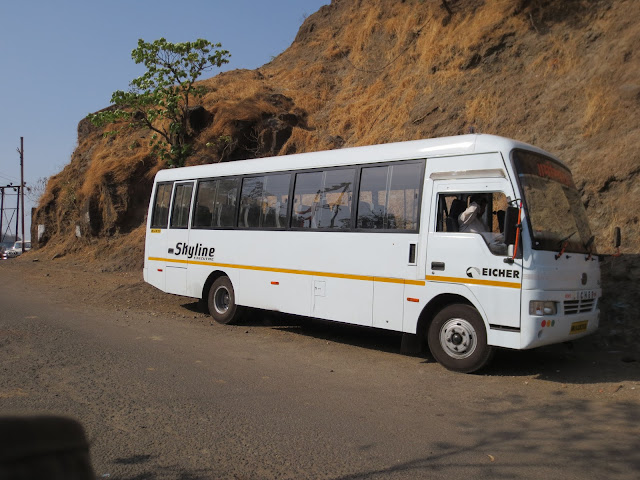 We reached safely to Pune around 10.30 PM while enjoying scenes from the Varandha Ghat along the way. I reached home around 11 PM, had a light dinner and slept peacefully to get ready for the office next day!

In summary, this trek provided us the contrasting experiences -- trekking under the soothing moonlight as well as scorching sun. But sheer satisfaction of witnessing mesmerising sunrise followed by visiting rarely visited spots made it a worthwhile and rewarding experience.